ABSTRACT: In this study, aspirin (AS) and isosorbide 5-mononitrate(ISM) sustained bilayer tablets were developed by wet granulation and compression technique, the influence of the contents of PVPP on the dissolution of AS from the tablets was investigated. An orthogonal experiment design was used to optimize ISM sustained release layer. The tablets were tested for their drug content, hardness, thickness, friability, and in vitro release characteristics. The optimized formulation of sustained bilayer tablets contains ISM 60 mg, HPMC K100M 45 mg, CMC-Na 12 mg, HPMC K15M 12 mg, lactose 50 mg and aerosol 3 mg for sustained release layer of ISM, PVP K30 Ethanol solution was used as adhesives. The optimized formulation of sustained bilayer tablets contains AS 75mg, PVPP 10mg, citrate acid 15mg, MCC 35mg, pregelatinized starch 15mg and 2mg talc for fast release layer. The drug release of AS was above 80% at 0.5h hour and ISM was above 70% at 7h in the optimized formulation.

INTRODUCTION:Aspirin chemically known as acetyl salicylic acid is used as a non-steroidal anti-inflammatory and analgesic drug. The structural formula of AS is as follows: 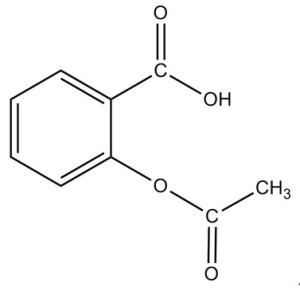 Isosorbide 5-mononitrate, chemically known as 1, 4:3, 6-dianhydro- D -glucitol 5-mononitrate, is used as antianginal drug. The structural formula of ISM is as follows:

A combination of AS of 75 mg and ISM of 60 mg is commercially available tablet form. This medicine contains two active ingredients, namely AS and ISM. AS is a non-steroidal anti-inflammatory drug (NSAID) which is widely used for treatment of pain, fever and other inflammatory conditions 1.

In addition to the well-known anti-inflammatory, analgesic and antipyretic properties, AS also inhibits platelet aggregation, is useful in preventing myocardial infarction and stroke, has neuroprotective actions, and decreases the incidence of cancer 2-4. Apart from these, AS shows a variety of pharmacological activities, including reducing ATP storage pools, increasing extracellular adenosine, lowering inducible nitric oxide synthase activity, modulating mitogen-activated protein kinases, and the expression of a plethora of genes induced under conditions of cell stress via the regulation of transcription factor NFkB activity.

AS is a commonly used non-steroidal anti-inflammatory drug capable of acetylating proteins in the course of a simple, non-enzymatic chemical reaction. AS usage is associated with decreased risk for colorectal, breast, esophageal, lung, stomach and ovarian cancer, and AS is both a chemopreventive and chemotherapeutic agent for breast and colon cancer 5–9. ISM can be used to expand capacitance vessel, reduce blood flow of back to heart, thus reducing cardiac preload and protecting myocardium. Clinically, it is widely used to prevent angina, congestive heart failure and ischemic heart disease and so on 10.

Combination therapy has additive effect and can be used for prevention of angina and heart diseaseⅡ. At the same time, this can improve the patients’ quality of life and medication compliance. In this preparation, ISM serves as the sustained release ingredient and AS the fast release ingredient. The two layers are pressed together and made into compound preparation. It is convenient and at the same time tolerability can be avoided.

Double-layer tablet refers to the tablet with the structure of two layers with two or more active pharmaceutical ingredients and each layer has different drug or excipients to avoid compatibility change between different drugs in compound preparation or to reach the effect of delayed release or controlled release. Double-layer tablets have the following advantages over conventional tablets: Firstly, it is convenient to regulate drug release rate or release order. Secondly, it can increase the capacity of drug loading, making it easier to use and improving patients’ compliance and the preparation process is relatively simple.

The present study focused on development of sustained bilayer tablets with an incorporation of aspirin and isosorbide 5-mononitrate, achieving the fast release effect of aspirin and sustained release of isosorbide 5-mononitrate. The formulation of tablets was optimized and the physical characteristics such as their drug content, weight variation, hardness, thickness, friability, and in vitro release characteristics were evaluated.

Formulations of sustained release tablets: Drug (aspirin and Isosorbide 5-mononitrate), HPMC, PVPP, lactose, citrate acid, MCC, pregelatinized starch and CMC-Na were passed through 80 mesh sieve separately. Sustained release layer was prepared as follows: The drug ISM was mixed with other ingredients. Then adhesives were added to form damp mass, granulated with a 20 mesh sieve after dried in an oven at 60℃, and aerosil were added to the above granules and mixed for 20 min. Granules contained ISM were pressed with a single-punch tableting machine to form the first layer. Then aspirin mixed with other ingredients was added on this first layer and compressed at high pressure to obtain a bilayer tablet. The formulations are shown in Table.1.

TABLE 1: EFFECT OF PVPP AMOUNT ON DISSOLUTION OF AS 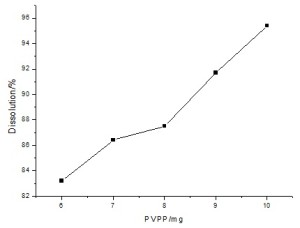 FIG. 1: EFFECT OF PVPP AMOUNT ON DISSOLUYION OF AS

Orthogonal experiment design for the selection of sustained release part: An orthogonal experiment design was used to optimize ISM sustained release layer. The concentration of HPMC K100M, CMC-Na, and HPMC K15M were chosen as the most influential factors (labeled as A, B, and C in Table 2). The three factors were investigated at three different levels taking the in vitro release as index. The L9 (34) orthogonal design was established as shown in Table 2 and Table 3.

In Table 3, Yi was an objective function value, the sum of difference between predicted value and the actual experiment data of drug release. It was calculated by Yi=｜Y2-0.30｜+｜Y4-0.55 ｜+｜Y8-0.70｜; Y2、Y4、Y8 respectively stood for actual accumulated release at 1、3、7 h and 0.30, 0.55, 0.70 were the predicted cumulative drug release at 1, 3, 7 h, respectively. K was the average of Yi for three factors under different levels. The difference between the highest and the lowest among K1, K2, and K3 was defined by the symbol “R”. The higher the R, the greater the influence on the drug releases.

TABLE 2: THE ORTHOGONAL LEVELS AND FACTORS OF FORMULATION

TABLE 3: THE DESIGN AND RESULTS OF THE ORTHOGONAL EXPERIMENT

The evaluation of optimized formulation: In this paper, sustained release layer of ISM was prepared by wet granulation method using ISM 60 mg, HPMC K100M 45 mg, CMC-Na 12 mg, HPMC K15M 12 mg and lactose 50 mg. Ethanol solution of 80% of PVP K30 of 5% (w/v) was used as adhesives and aerosil of 3 mg as lubricant.

Granules contained ISM was pressed with a single-punch tableting machine to form a first layer. Then aspirin mixed with other ingredients (aspirin 75mg, PVPP 10mg, citrate acid 15mg, MCC 35mg, talc 2mg) was added on this first layer and compressed to obtain a bilayer tablet. Friability (0.32%-0.45%) showed good mechanical resistance of the tablets. And all the tablets had smooth surface without spots. The results of dissolution of this tablet were shown in A and B in Fig. 2. From the following figures we could learn that the dissolution results of both sustained release layer and fast release layer met the requirements.

FIG. 2: THE RELEASE RESULTS OF ASPIRIN (A) AND ISOSORBIDE 5-MONONITRATE (B) IN THE SUSTAINED BILAYER TABLETS