ABSTRACT:The aim of the study was to develop and evaluate matrix based controlled drug delivery system of Bupropion hydrochloride. Controlled release tablets were prepared by employing Guar gum, Eudragit RS 100, HPMC K15M, HPMC K100M at different concentration. All 13 batches passed friability, hardness, weight variation, assay but only four batches (CRB7W, CRB8W, CRB10W, and CRB11W) passed the dissolution as per USP 30 NF25 for extended release tablet of Bupropion hydrochloride. Among the four formulation CRB7W & CRB11W follows Higuchi Model and CRB8W & CRB10W follows First order model. The optimized formulations were compared with the marketed product for similarity and dissimilarity factor. CRB7W and CRB10W showed dissimilar result and CRB8W and CRB11W showed similar result with marketed product. HPMC (K15M 7& K100M) as a matrix polymer used in  tablet  formulation provide a good initial retardation in the release as well as helped to enhance the overall release rate of the drug than that of Gaur gum and Eudragit RS 100.

INTRODUCTION: Oral drug delivery has been known for decades as most preferred route of administration among all routes due to its ease of administration1. The term controlled release refers to the continuous release of their active ingredients at predetermined rate and predetermined time. Controlled release drug therapy reduces the dosing frequency, eliminates local and systemic side effects, improves efficacy in treatment and improves the bioavailability 2. Bupropion hydrochloride (±)-2-(tert-butylamino)-3-chloro propiophenone hydrochloride (Figure 1) is an antidepressant drug belonging to the class amino-ketone with molecular weight 276.20 gm/mol and is widely used for the treatment of minimal brain dysfunction, tardive dyskinesia, impaired mental alertness.

Preparation of calibration curve: 25mg accurately weighed drug was dissolved in 25 ml of distilled water in 25ml volumetric flask. From this stock solution different dilution were made and absorbance were measured at 298 nm in UV spectrophotometer. The calibration curve was prepared by plotting the concentration on X-axis and absorbance on Y-axis. The equation obtained was used to estimate the drug release in the dissolution study.

Preparation of Controlled Release Tablet: The tablets of Bupropion hydrochloride were prepared by wet granulation technique. Polymers HPMC (K15M, K100M), Eudragit RS100 and Guar gum were used to develop the core tablet. Accurately weighed quantity of the ingredients Bupropion HCL, MCCP PH 101, different polymers and stearic acid were sifted through sieve #20 and mixed geometrically for 10 minutes. The binder was prepared by dissolving 3gm of ethyl cellulose in 50ml dichloromethane.

The above binder solution was poured over geometrically mixed powder and prepared granules by stirring the powder with hands for 15 minutes. The above wet granules were dried at about 60°C in the hot air oven. These dried granules were passed through sieve #20 and magnesium stearate, aerosol (previously sifted from # 60) were added and further mixing was done for 10 minutes using double cone blender. Total 13 different formulations were prepared from the mixed powder using a 12- station rotatory tablet compression machine with 12.50mm diameter flat and round shaped punches.

Angle of Repose: Angle of repose of granules was determined by funnel method.  Accurately weighed granules were taken in a funnel. The height of the funnel was adjusted such that it just touches the apex of the heap of the granules. The granules were allowed to flow through the funnel freely on to the surface, the height and diameter of the powder cone were measured and angle of repose was calculated using the following equation.

Where h and r are the height and radius of the powder cone respectively.

1.      Hardness: Hardness variations of 10 tablets were measured using Monsanto hardness tester. The average hardness was calculated and the result is shown as mean ±S.D.

Weight variation: Randomly selected 20 tablets from each batch were weighed on analytical balance (KERN & Sohn GmbH, d = 0.1mg) and average weight was calculated, minimum and maximum weight were obtained. The tablets passed the test, if not more than two 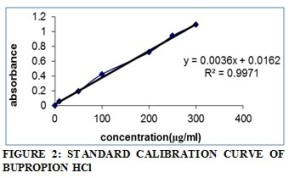 Evaluation of granules: The prepared granules of each 13 batches were evaluated on the basis of angle of repose and Carr’s index.

1- Hardness:  Hardness variations of 10 tablets were measured using Monsanto hardness tester. The average hardness was calculated and the result is shown as mean ±S.D. All the 13 batches show good hardness in range of 9.9 ± 0.65 to 10.8± 0.58 kg/cm2. All the data are shown in Table 3.

Dissolution studies: The dissolution studies of  13 formulations  were carried out using the tablet dissolution apparatus USP type II (paddle), the study was carried out at 50 rpm for 8 hours at temperature 37 ±0.5°C using 900 ml of distilled water  as the dissolution medium. Each 10 ml of sample was withdrawn at 1, 4, and 8 hour interval with replacement of same volume of the dissolution medium maintained at temperature 37 ± 0.5°C. The withdrawal samples were filtered and analyzed by using UV spectrophotometer at the wave length 298nm. The released amount of drug was calculated by using the equation from the standard calibration curve. Cumulative % drug release versus time curve was plotted. Among 13 batches only CRB7W, CRB8W, CRB10W, CRB11W meets the USP30-NF25 parameter. The entire cumulative drug release % is given in Table 4. The comparative dissolution studies are shown in Figure 3, Figure 4,Figure 5 & Figure 6. 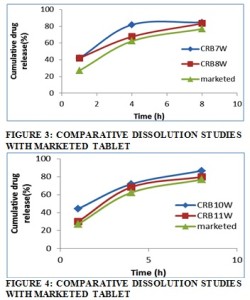 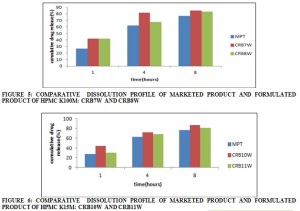 Drug release kinetics: To study the release mechanism of drug release from the matrix tablets, the release data were fitted into the kinetics equation of Zero order, First order, Higuchi model and Peppas power law.

SUMMARY: A controlled drug delivery systems of Bupropion HCI was formulated to improve the therapeutic effectiveness of the drug and to reduce the total drug needed and minimizing the toxicside effect. Formulation of controlled release tablets were developed by employing different proportion of HPMC, Eudragit RS and Gaur gum as the rate controlling polymers. In the formulation, the drug-polymer ratio was 1.5:1, 1:1 and 0.75:1 of drug and Gaur gum. Similarly, the ratio of 3:1, 2:1, 1.5:1 of drug and Eudragit RS, 12:1, 6:1, and 2:1 of drug and HPMC K100M and 6:1, 3:1, 2:1 and 1:1 were used.

The formulated matrix tablets meet the pharmacopoeial requirement of uniformity of weight, hardness, % friability and Assay was within the acceptance point as per USP 30-NF 25 and IP. The dissolution was followed by the tablet dissolution apparatus USP type II (paddle), the study was carried out at 50 rpm up to 8 hours at temperature 37 ±0.5°C using 900 ml of distilled water as the dissolution medium.

CONCLUSION: Controlled release tablets of Bupropion HCl were prepared by using matrix based polymers (Gaur gum, Eudragit RS and HPMC (K15M AND K100M). In the study, we found thatformulated tablet with the useof HPMC (K15M AND K100M) as matrix polymer helped to provide a good initial retardation in the release as well as helped to enhance the overall release rate of the drug than that of Gaur gum and Eudragit RS.

From the comparative study with the market product, CRB7W, CRB8W, CRB10W and CRB11W showed better release rate of the drug than that of marketed formulation.

Hence, it may be concluded that the incorporation of a different viscosity grade of polymer in the controlled release matrix might offer a simple means of modulating the release behavior in order to minimize drug release in stomach and in maximizing the therapeutic benefit of the drug with optimal patient compliance and minimum local or systemic toxicity.

The result is shown in Table 5.