ABSTRACT: The aim of the present work is to increase the gastric residence time of Lamivudine by preparing it into gastro retentive floating tablets whereby making it available at its site of absorption and to achieve an extended action for a time period of 24hrs and to reduce the dosing frequency to once a day, using release retardant polymers METHOCEL, POLYOX and CARBOPOL. The compatibility of the drug with excipients was confirmed by DSC study. The gastro retentive floating tablets were prepared by direct compression method and were evaluated for physicochemical characteristics and in-vitro dissolution studies. The optimized formulation was subjected to stability studies. The prepared tablets exhibited satisfactory physicochemical characteristics. The in-vitro drug release studies revealed that the drug release was sustained up to 24hrs for formulation F5 containing drug and POLYOX as release retardant polymer at a concentration of 1:0.75. Using Higuchi’s Model and the Korsmeyer equation, the drug release mechanism from the floating sustained release tablets was found to be Anomalous (non-Fickian) diffusion. Optimized formulations showed no significant change in physical appearance, pre and post compression parameters and drug dissolution studies after storage at 40° C ± 2° C and 75% ± 5% RH in a humidity chamber for 1 month. And hence the current investigation was successful in its intended aim.

INTRODUCTION:New drug delivery technologies are revolutionizing the drug discovery, development and creating R&D focused pharmaceutical industries to increase the momentum of global advancements. In this regard novel drug delivery systems (NDDS) have many benefits, which includes improved therapy by increasing the efficacy and duration of drug activity, increased patient compliance through decreased dosing frequency and convenient routes of administration and improved site specific delivery.

To develop an oral controlled-release drug delivery system is not just to sustain the drug release but also to prolong the presence of the dosage form within the gastrointestinal tract (GIT) until all the drug is completely released at the desired period of time 1.  The GFDDS of the present investigation are designed to retain in the stomach for longer periods of time and deliver the Lamivudine effectively.

The system provides increased absorption 2 of the Lamivudine at a rate such that effective plasma level can be achieved and maintained for a prolonged duration. Lamivudine is a BCS Class I active anti-retroviral agent which belongs to non-nucleoside reverse transcriptase inhibitor. It is generally prescribed in the dose of 100-150 mg twice a day, and is well absorbed in the upper gastrointestinal tract with a short biological half-life of 5-7 h 3.

By decreasing the dosing frequency to once a day systemic side effects can be decreased and the patient compliance can be improved 4.

The present work was aimed at the formulation of lamivudine floating tablets using 3 different polymers in 3 different concentrations, in order to decrease the dosing frequency, by sustaining the drug release for 24 hrs and to evaluate the prepared formulations.

Drug Excipient Compatibility Studies by Differential Scanning Calorimetry:  The DSC measurements were performed using differential scanning calorimeter (Netzsch DSC Q 1000, TA Instrument, Germany). The samples of about 5-10 mg were hermetically sealed in aluminium pans and heated at a constant rate of 10° C/ min over a temperature range of 50-300°C. An inert atmosphere was maintained by purging with nitrogen gas at a flow rate of 100 ml/min. An empty aluminium pan was used as reference.

Preparation of Floating Tablets of Lamivudine:  The formulations containing 300 mg of lamivudine were fabricated using direct compression method using formulae mentioned in Table I, required quantities of Drug, Polymer and other excipients except magnesium stearate were passed through 30# sieve together and blended for 10 minutes. The powder blend was lubricated with magnesium stearate (pre-sifted through 60# sieve) and blended for 5 minutes. Then the powder blend was compressed into tablets of 900 mg by using 17.5 x 8.75 mm, caplet shaped punches.

In vitro evaluation of the prepared tablets: 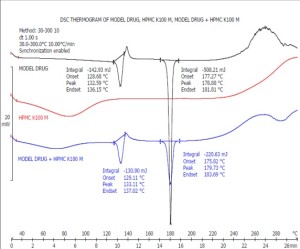 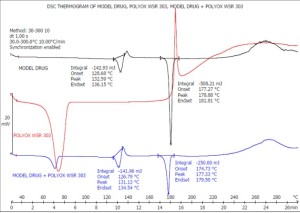 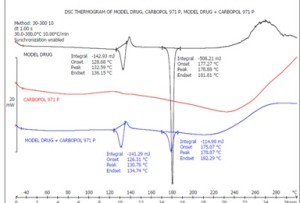 The physicochemical properties of the tablets were summarized in the Table 2. All the tablet formulations showed acceptable physicochemical properties and complied with the pharmacopoeial specifications (IP) for weight variation, drug content and friability. The weight of the tablet ranged from 890-917 mg. The percentage of drug content was found to be in the range of 99.5-101.5. The percentage friability for all the formulations was less than 1 %, indicating a good mechanical resistance.

Floating lag time and duration: In the present study, the floating drug delivery systems were formulated by employing sodium bicarbonate as the effervescent agent, dispersed in the hydrogel matrix formed by the polymers HPMC K100M, Polyox WSR 303 and Carbopol 971 P. The in vitro testing revealed that all the formulations, except F4, F7, F8 and F9, remained buoyant for more than 24 hrs. The gel layer formed by the polymers enabled efficient entrapment of generating gas bubbles and made the tablet float on the test medium (0.1 N HCl) for an extended period of time 8. 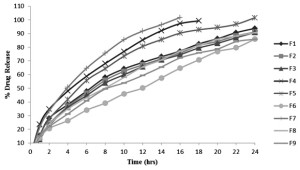 The drug release studies showed the formulations from F4 and F7 could not sustain the release of the drug for 24h. This might be attributed to the insufficiency of the polymer concentration in controlling the drug release upto 24hrs. A slow and spread over the release of the drug for 24 hrs was found with the other formulations. F5, which was fabricated using Polyox WSR 303 (225 mg), was found to be the best formulation among the other formulated tablets, with 100 % drug release. This might be due to the formation of high viscous gel with Polyox WSR 303, upon contact with the aqueous fluids, which can sustain the drug release for 24 hours.

The drug release from the polymeric systems is mostly by diffusion and is best described by Fickian diffusion. But in case of the formulations containing swelling polymers, as HPMC and/or sodium alginate, other processes take place, like relaxation of polymer chains, imbibition of water causing polymers swelling and considerable volume       expansion 9, 10 .

Lamivudine drug release data was also obeyed Higuchiand Peppas models with R2 values greater than 0.97. When percentage drug released was plotted against √time, linear regressions with ‘R2’ > 0.978 were observed with all floating tablets prepared indicating that the drug release from all these formulations was diffusion controlled.

Values of n between 0.45 and 0.89 can be regarded as an indicator for both the phenomena (anomalous transport).

The values of the diffusion exponent (n) with the corresponding correlation coefficients for all the formulations were shown in Table 3. The ‘n’ values of various formulations were found to be between 0.45 and 0.89, indicating anomalous transport. The relative complexity of the prepared formulations may indicate that the drug release is controlled by more than one process; a coupling of diffusion and      erosion 11.

Stability Studies: The optimized formulation was subjected to stability studies. The controlled stability sample showed a comparable release profile Fig. 5 with the initial release when exposed to 40° ± 2° C and 75% ± 5% RH in a humidity chamber for 1 month. There was no significant change in the physical characteristics. 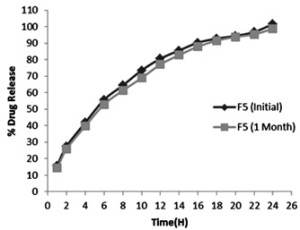 FIG. 5: COMPARATIVE DISSOLUTION OF THE OPTIMIZED FORMULATION (F5) AT THE INITIAL TIME AND AFTER 1 MONTH

CONCLUSION:  The controlled release floating tablets of Lamivudine were formulated using 3 different polymers, HPMC K 100M, Polyox WSR 303 and Carbopol 971 P in three concentrations. A slow and rapid release of the formulations was shown except for F4 and F7.

Among the all formulations, the tablets formulated using 225 mg of Polyox WSR 303 (F5) showed better results with 100% drug release at 24 hours. From the above results, F5 was thus found suitable for once a day administration of lamivudine.

ACKNOWLEDGEMENT: Authors wish to express their sincere gratitude to MSN laboratories Ltd., for giving a gift sample of lamivudine and Richer pharmaceuticals, Hyderabad, for providing necessary facilities and encouragement.