P. Suresh Kumar * and A. Sravani

ABSTRACT: The aim of the present study was to develop a controlled release formulation of Lornoxicam to maintain constant therapeutic levels of the drug for over 12 h. Guar gum, xantham gum, and carbopol 934 were employed as polymers. All the formulations were passed various physicochemical evaluation parameters, and they were found to be within limits. From the dissolution studies, it was evident that the formulation (F2) showed better and desired drug release patterns, i.e., 99.65% in 12 h. It contains the guar gum polymer. It followed the Higuchi order release kinetics mechanism.

INTRODUCTION: Historically, oral drug administration has been the predominant route for drug delivery. It is known to be the most popular route of drug administration due to the fact the gastrointestinal physiology offers more flexibility in dosage form design than most other routes. A major challenge for the pharmaceutical industry in drug development is to produce safe and efficient drugs; therefore, properties of drugs and the way in which they are delivered must be optimized 1. A controlled release drug delivery system delivers the drug locally or systemically at a predetermined rate for a specified period of time. The goal of such systems is to provide desirable delivery profiles that can achieve therapeutic plasma levels. Drug release is dependent on polymer properties; thus, the application of these properties can produce well characterized, and reproducible dosage forms 2.

Lornoxicam is a nonsteroidal anti-inflammatory drug (NSAID) with analgesic and antipyretic properties. Prostaglandins are substances that contribute to inflammation of joints. Lornoxicam inhibits prostaglandin synthetase (cylooxygenase 1 and 2) and leads to a decrease in the synthesis of prostaglandins; therefore, inflammation is reduced 3. The aim of the study is to the formulation and in-vitro characterization of controlled release matrix tablets of Lornoxicam.

MATERIALS AND METHODS: Lornoxicam was a gift sample from (Aurobindo Pharma-ceuticals Limited, Hyderabad, India). Carbopol 971P, Xanthan Gum and Guar Gum were obtained from Hetro Pharmaceuticals, Hyderabad, India). Talc, Magnesium stearate, and Microcrystalline cellulose was procured from Loba Chemie Private Ltd. All other chemicals and reagents were analytical grade and used as received.

Fourier Transform Infrared (FTIR) Spectroscopy: The formulations were subjected to FT-IR studies to find out the possible interaction between the drug and the excipients during the time of preparation. FTIR analysis of the Pure drug and optimized formulation was carried out using an FT IR spectrophotometer (Bruker FT-IR - USA) 4.

Preformulation Parameters: The quality of the tablet, once formulated by rule, is generally dictated by the quality of physicochemical properties of blends.

Formulation Development of Tablets: All the formulations were prepared by direct compression. The compositions of different formulations are given in Table 1. The tablets were prepared as per the procedure given below, and the aim is to prolong the release of Lornoxicam. Lornoxicam and all other ingredients were individually passed through sieve no ¹ 60. All the ingredients were mixed thoroughly by triturating up to 15 min. The powder mixture was lubricated with talc. The tablets were prepared by using direct compression method 8.

Weight Variation Test: To study the weight variation, twenty tablets were taken, and their weight was determined individually and collectively on a digital weighing balance. The average weight of one tablet was determined from the collective weight. The weight variation test would be a satisfactory method of determining the drug content uniformity. Not more than two of the individual weights deviate from the average weight by more than the percentage shown in the following table, and none deviate by more than twice the percentage. The mean and deviation were determined. The percent deviation was calculated using the following formula 9.

Hardness: Hardness of tablet is defined as the force applied across the diameter of the tablet in order to break the tablet. The resistance of the tablet to chipping, abrasion, or breakage under the condition of storage transformation and handling before usage depends on its hardness. For each formulation, the hardness of three tablets was determined using Monsanto hardness tester, and the average is calculated and presented with deviation 10.

Determination of Drug Content: Tablets were tested for their drug content. Ten tablets were finely powdered quantities of the powder equivalent to one tablet weight of drugs were accurately weighed, transferred to a 100 ml volumetric flask containing 50 ml water, and were allowed to stand to ensure complete solubility of the drug. The mixture was made up to volume with media. The solution was suitably diluted, and the absorption was determined by UV–Visible spectrophotometer. The drug concentration was calculated from the calibration curve 13.

Procedure: 900 ml of 0.1 HCl was placed in a vessel, and the USP apparatus –II (Paddle Method) was assembled. The medium was allowed to equilibrate to temp of 37 °C + 0.5 °C. Tablet was placed in the vessel, and apparatus was operated for 2 h, and then the media 0.1 N HCl were removed, and pH 6.8 phosphate buffer was added process was continued from up to 12 h at 50 rpm.

A definite time intervals withdrawn 5 ml of sample, filtered and again 5 ml media was replaced.  Suitable dilutions were done with media and analyzed by spectrophotometrically at respective wavelengths using UV-spectro-photometer 14, 15, 16.

Application of Release Rate Kinetics to Dissolution Data: Various models were tested for explaining the kinetics of drug release.

To analyze the mechanism of the drug release rate kinetics of the dosage form, the obtained data were fitted into zero-order, first-order, Higuchi, and Korsmeyer-Peppas release model 17, 18, 19, 20.

Where ‘F’ is the drug release at time‘t’ and ‘Ko’ is the zero-order release rate constant. The plot of % drug release versus time is linear.

A plot of cumulative log percent of drug remaining to be released vs. time is plotted, then it gives first-order release.

Higuchi Release Model: To study the Higuchi release kinetics, the release rate data were fitted to the following equation.

Where ‘k’ is the Higuchi constant. In Higuchi model, a plot of % drug release versus square root of time is linear.

Where, Mt/ M∞ is a fraction of drug released at a time ‘t’ k represents a constant, and ‘n’ is the diffusional exponent, which characterizes the type of release mechanism during the dissolution process. For non-Fickian release, the value of n falls between 0.5 and 1.0.

Where k is the Hixson-Crowell rate constant.

Hixson-Crowell's model describes the release of drugs from an insoluble matrix through main erosion. (Where there is a change in surface area and diameter of particles or tablets).

Drug – Excipient Compatibility Studies: There was no disappearance of any characteristics peak in the FTIR spectrum of drugs and the polymers used. This shows that there is no chemical interaction between the drug and the polymers used. The presence of peaks at the expected range confirms that the materials taken for the study are genuine, and there were no possible interactions. Lornoxicam also presents in the physical mixture, which indicates that there is no interaction between the drug and the polymers, which confirms the stability of the drug. The results are shown in Fig. 1 and 2. 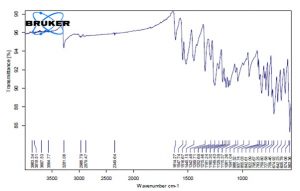 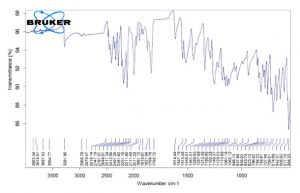 Quality Control Parameters For tablets: Tablet quality control tests such as weight variation, hardness, and friability, thickness, and drug release studies in different media were performed on the compression coated tablet. The results are shown in Table 3.

Weight Variation Test: Tablets of each batch were subjected to weight variation test; the difference in weight and percent deviation was calculated for each tablet. The average weight of the tablet is approximately in a range of 295.02 ± 0.883 to 05.88 ± 2.28 mg; the results of the test showed that the tablet weights were within the pharmacopeia limit.

Hardness Test: Hardness of the three tablets of each batch was checked by using Monsanto hardness tester. The results showed that the hardness of the tablets is in a range of 4.3 ± 0.03 to 5.0 ± 0.05 kg/cm2, which was within IP limits.

Thickness: Thickness of three tablets of each batch was checked by using Vernier Caliper and data shown. The result showed that the thickness of the tablet is raging from 2.74 ± 0.06 to 3.08 ± 0.06 mm.

Friability: Tablets of each batch were evaluated for percentage friability and. The average friability of all the formulations lies in the range of 0.08 ± 0.04 to 0.72 ± 0.03, which was less than 1% as per the official requirement of IP indicating a good mechanical resistance of tablets. All the parameters such as weight variation, friability, hardness, thickness, and drug content were found to be within limits 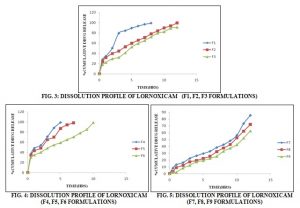 Among all formulations, F2 formulation was considered as optimized formulation. It was shown a 99.65% drug release at 12 h.

Various models were tested for explaining the kinetics of drug release. To analyze the mechanism of the drug release rate kinetics of the dosage form, the obtained data were fitted into zero-order, first-order, Higuchi, and Korsmeyer-Peppas release model. 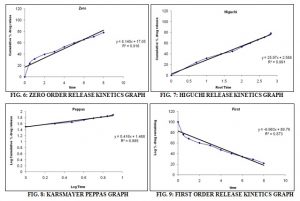 From the above graphs, it was evident that the formulation F2 was followed Higuchi release kinetics.

CONCLUSION: The present investigation was carried out for controlling the drug release up to 12 h.

For controlling the drug release, polymers used such as Guar Gum, Xanthan Gum, and Carbopol 934. From the investigation, studies were found following: Standard graph was given that regression analysis R2 value was 0.999 in both 0.1 N HCl and pH 6.8 phosphate buffer.

FTIR results were shown good compatibility between drugs and excipients. All the pre and post-compression studies such as Bulk density, Tapped density, Angle of repose, Carr’s index, Hausner's ratio, Weight variation, Thickness, Hardness, Drug content were found to be within limits.