ABSTRACT: Fast dissolving tablets are those which disintegrates rapidly within the mouth and taken without consumption of water. The present work is concerned with the formulation and in-vitro evaluation of Lacosamide fast dissolving tablets. Lacosamide is a novel anti-epileptic drug used in the treatment of partial onset of seizures. The objective of this study was to improve the rapid onset of action of the drug. The fast dissolving tablets of Lacosamide were prepared using direct compression method by employing natural super- disintegrating agents like dehydrated banana powder (DBP) and Ocimum sanctum powder. Different concentrations of superdisintegrants were used in the formulations as 2%, 4%, 6%, and 8%. The prepared tablets were evaluated for pre-compression parameters like bulk density, tapped density, angle of repose, Hausner ratio, Carr's index, and were in the acceptable range. Post-compression parameters like hardness, friability, drug content, wetting time, water absorption ratio, disintegration time, and dissolution study were also evaluated. From the results obtained, it was found that tablet formulation with 8% concentration of Ocimum sanctum seed powder (F8) showed 98% of drug release at the end of 30 min and disintegration time was found to be 25 sec. Also, the hardness, friability, weight variation, and drug content of prepared tablets were found to be in the acceptable limits. The in-vitro release kinetics reveals that formulation (F8) follows first order kinetics.

INTRODUCTION: Oral drug delivery remains the preferred route for administration of various drugs. Recent developments in technology have prompted scientists to develop FDTs with improved patient compliance and convenience. Many elderly patients have difficulty in swallowing tablets, capsules, or powders. To alleviate this problem, these tablets are expected to dissolve or disintegrate in the oral cavity without drinking water 1.

Addition of disintegrates in fast dissolving tablets leads to quick disintegration of tablets and hence improve dissolution. As disintegration plays an important role in a tablet’s dissolution before the active drug substance is finally released from the tablet’s structure into the body, therefore, type, concentration and efficiency of disintegrants to a large extent affects the disintegrate properties 2.

Epidemiologic studies have shown that approximately 0.5% to 1% of the general population suffer from epilepsy, with annual incidence rates of approximately 30 to 50 percent per year. Epilepsy is not a distinct disease entity, but a common final pathway of a large variety of different etiologies. It can be described as the repetitive occurrence of abnormal bioelectrical synchronization of a large number of neurons leading to temporary dysfunction of one or more brain areas 3. Lacosamide (R)-2-acetamido-N-benzyl-3-methoxypropionamide, is a functionalized amino acid with a novel anticonvulsant activity. Complex partial seizures impair consciousness or can cause some people to lose consciousness entirely. Simple partial seizures can be even more delicate while the person cannot control the seizure itself. Lacosamide has low plasma protein binding (≤15%), and the volume of distribution is approximately 0.6 L/kg, which is similar to body water. Lacosamide is primarily eliminated really as unchanged drug.

Lacosamide selectively enhances slow inactivation of voltage-dependent sodium channels without affecting fast inactivation, which may normalize neuronal firing thresholds 4. To improve the rapid onset of action of the drug and to provide immediate therapy to the patients, fast dissolving tablets of Lacosamide was developed. In the present study, an attempt was made to develop fast dissolving tablets of Lacosamide using natural super- disintegrating agents like dehydrated banana powder and Ocimum sanctum powder. The usage of above natural superdisintegrating agents in the formulation of Lacosamide tablets gives the novel approach to the present work.

MATERIALS AND METHODS: Lacosamide was obtained as a gift sample from Finoso Pharma Pvt. Ltd., Hyderabad, Telangana. Microcrystalline cellulose, talc, magnesium stearate, and other chemicals were purchased from SD Fine Chemicals, Mumbai. All the chemicals used were of analytical grade.

Preparation of Standard Stock Solution: 100 mg of Lacosamide pure drug was dissolved in 100 ml of 0.1N HCl (stock solution - 1000 µg/mL), from this 10 ml of solution was taken, and the volume was adjusted to 100 ml with 0.1N HCl and suitable dilutions were made to get the concentrations of 5 to 30 µg/mL. The absorbance of the above dilutions was measured at 215 nm by using UV-spectro-photometer 6.

Formulation of Lacosamide Fast Dissolving Tablets: Fast dissolving tablets containing Lacosamide were prepared by direct compression method using varying concentrations of natural super-disintegrants like dehydrated banana powder and Ocimum sanctum seed powder with micro-crystalline cellulose as diluent. Sodium saccharin was used as a sweetening agent.  All the ingredients were weighed as per the batch formula mentioned in Table 1.

The drug and excipients were initially passed through sieve no. 40. Super- disintegrants, Lacosamide, and other ingredients were mixed homogeneously using motor and pestle. The above mixture was lubricated with magnesium stearate and talc before the compression. The tablets were compressed by using Rimek tablet compression machine 7.

Preparation of Dehydrated Banana Powder (DBP): The bananas were purchased from the local market of Anantapur. Peels were removed, and the fruits were sliced. The sliced pulp was washed with distilled water to remove water-soluble contents. 0.2% w/w methylparaben was added as a preservative. Sliced pulp was grounded in a domestic mixer and the obtained wet mass was dried in an oven at 45 ºC for 24 h to get constant weight. The resultant was passed through mesh size 80 and stored in polythene bags 8.

Preparation of Ocimum Sanctum Seed Powder: Ocimum sanctum seeds were blended and kept in contact with Petroleum ether in conical for 12 h. The flask was kept on the electrical shaker for continuous shaking. The material was then filtered out and dried at room temperature for complete removal of petroleum ether. The seed powder was then soaked in distilled water. The swollen wet mass then spread on the glass tray and dried at 60°C. The dried material was passed through sieve #30. The material was again passed through mesh #60. 9

Bulk Density: It is the ratio of the total mass of powder to the bulk volume of powder. It was measured by pouring the weighed powder into a measuring cylinder, and the initial volume was noted. This initial volume is called bulk volume. The bulk density is calculated according to the formula mentioned below 10.

Tapped Density: Weighed quantity of powder blend was taken into a graduated cylinder. The volume occupied by the drug was noted down. Then the cylinder was subjected to 100 taps in density tester (Electro lab), and the volume was measured 11.  It is expressed in g/mL.

Tapped density = Mass of powder/ The tapped volume of the powder

The angle of Repose (θ): A glass funnel is held in place with a clamp on ring support over a tile. Approximately 100 g of powder is transferred into funnel through a mesh size no. 20# keeping the orifice of the funnel blocked by the thumb. When the powder is emptied from the funnel, the angle of the heap to the horizontal plane is measured with a scale. The height of the pile (h), and the radius of the base is measured with a ruler 12.

Carr’s Index: The compressibility index of the powder blend was determined by Carr's compressibility index. It depends upon the bulk density and tapped density of powder and evaluates the rate at which it packed down 13. The following formula was used for the determination of carr’s index:

Hausner’s Ratio: It is defined as the ratio of the tapped density to bulk density. It can be calculated by using the formula:

Thickness: The thickness of tablets was measured using Vernier calipers. Tablets are taken and are placed between the two upper jaws and thickness is measured as a replicate of three sets. After adjusting the calipers to zero reading the negative or positive correction values is noted, and the values are estimated 14.

Friability: Friability test from each batch were examined using Roche fribilator (Electrolab) and the equipment was run for 4 min at 25 revolutions per min. The tablets were taken out, dedusted and reweighted, and % friability was calculated 16.

Water Absorption Ratio: A piece of tissue paper (10.75 × 12 mm) folded twice was placed in a culture dish (d = 6.5 c) containing 6 ml of simulated saliva (phosphate buffer pH 6.8). A tablet was placed on the surface of tissue paper. Initially, the tablet weight was noted before placing in a petri dish. After complete wetting, the wetted tablet was then weighed. The water absorption ratio, r, was determined using equation 19.

In-vitro Disintegration Studies: The test was carried out on 6 tablets using digital tablet disintegration tester (Electrolab). Distilled water at 37 °C ± 2 °C was used as a disintegration media and the time taken for complete disintegration of the tablet with no palpable mass remaining in the apparatus was measured in seconds 20.

Drug Content: Tablets were selected randomly, and the average weight was calculated. Tablets were crushed in a motor and accurately weighed the amount of tablet powder was taken from the crushed blend. Then the samples were transferred to 100 ml volumetric flask and diluted with 0.1N HCl. The contents were shaken periodically and kept for 2 h for solvation of drug completely. The mixture was filtered in Whatmann filter paper and absorbance was measured at 215 nm using 0.1N HCl as blank 21.

In-vitro Release Study: In-vitro dissolution of Lacosamide fast dissolving tablets was determined in apparatus II as per USP employing a rotating paddle at 50 rpm using 900 ml of 0.1N HCl, at 37 ± 0.5 ºC. Aliquots of dissolution solution (5 ml) were withdrawn at specific intervals of time and analyzed for drug content by measuring the absorbance at 215 nm. The volume withdrawn at each time interval was replaced with a fresh volume of dissolution medium. Cumulative percent of Lacosamide released was calculated and plotted against time 22.

Drug Release Kinetics: To investigate the mechanism of drug release from the prepared tablets, the release data were fitted into first-order, zero-order models 23.

Pre-formulation Studies: Pre-formulation studies were performed for pure drug and when combined with excipients. The results were shown in Fig. 1, 2, 3, and 4. 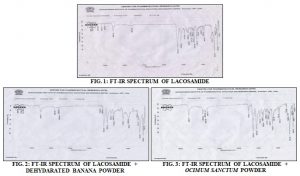 Evaluation of Pre-compression Parameters: Pre-compression parameters like bulk density, tapped density, Hausner ratio, Carr's index and angle of repose were performed for all formulations, and the results were reported in Table 2.

Carr’s Index: Carr’s index of all formulations was found to be in the range of 12.56-15.66%. The optimized formulation F8 shown 12.56%, which ensures that the flow property is good.

Hausner Ratio: Hausner ratio of all formulations was found to be in the range of 1.12-1.17. The optimized formulation F8 showed 1.12; it indicates that flow property was good.

Water Absorption Ratio: Water absorption capacity was found to increase with an increase in the concentration of both banana powder and Ocimum sanctum powder from batches F1-F8 which could be due to higher water uptake by the natural polymer.

Hardness: The hardness of each batch of tablets was found to be in the range of 3.3-3.5 kg/cm2, which ensures good handling characteristics for all formulations.

Friability: The percentage friability was less than 0.5% for all formulations ensuring that all tablets were mechanically stable and the ranges were found between 0.1-0.6%.

Weight Variation: All the formulation passed weight variation test as the % weight variation was within the Standard Pharmacopoeial limits. The weights of all the tablets were found to be uniform with low standard deviation values.

Drug Content: The prepared tablets were evaluated for drug content, and the drug content was found to be in the range of 97-99.7%. The results indicated that reproducible with minimum batch to batch variability. 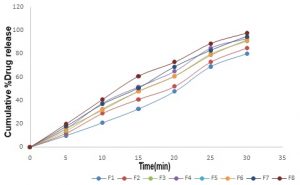 In-vitro Drug Release Kinetics: The drug release data of all formulations were fitted to kinetic models. The results were shown in Table 5 and Fig. 5, 6, 7, and 8.

ACKNOWLEDGEMENT: The authors are thankful to Raghavendra Institute of Pharmaceutical Education and Research (RIPER), Anantapur for providing facilities for the research work.