ABSTRACT: The main objective of the present work is to develop Floating Effervescent matrix tablets of Ranitidine hydrochloride using different polymers viz. hydroxy propyl methyl cellulose (HPMC), Xanthan gum and Guar gum. Varying ratios of drug and polymer like 1:0.6 and 1:1 were selected for the study. After fixing the ratio of drug and polymer for control the release of drug up to desired time, the release rates were modulated by combination of two different rate controlling material. After evaluation of physical properties of tablet, in-vitro buoyancy studies, Swelling index and in vitro release study were performed in 0.1N Hcl up to 12 hrs. Dissolution data was analyzed by Korsmeyer-Peppas power law expression and modified power law expression. It was observed that matrix tablets contained polymer blend of HPMC K100M/Guar gum were successfully sustained the release of drug upto 12 hrs. Among all the formulations, formulation F9 which contains 50% HPMC K100M and 50% of Guar gum has released the drug which follow Zero order kinetics via, swelling, diffusion and erosion. The release profile of formulation F9 was comparable with the marketed product. The FTIR study revealed that there was no chemical interaction between drug and excipients.

INTRODUCTION: The oral route is considered as the most promising route of drug delivery. Effective oral drug delivery may depend upon the factors such as gastric emptying process, gastrointestinal transit time of dosage form, drug release from the dosage form and site of absorption of drugs. Most of the oral dosage forms possess several physiological limitations such as variable gastrointestinal transit, because of variable gastric emptying leading to non-uniform absorption profiles, incomplete drug release and shorter residence time of the dosage form in the stomach

This leads to incomplete absorption of drugs having absorption window especially in the upper part of the small intestine, as once the drug passes down the absorption site, the remaining quantity goes unabsorbed. The gastric emptying of dosage forms in humans is affected by several factors because of which wide inter- and intra-subject variations are observed 1-6. Since many drugs are well absorbed in the upper part of the gastrointestinal tract, such high variability may lead to non-uniform absorption and makes the bioavailability unpredictable. Hence a beneficial delivery system would be one which possesses the ability to control and prolong the gastric emptying time and can deliver drugs in higher concentrations to the absorption site (i.e. upper part of the small intestine).

The identification of new diseases and the resistance shown towards the existing drugs called for the introduction of new therapeutic molecules. In response, a large number of chemical entities have been introduced, of which some have absorption all over the gastrointestinal tract (GIT), some have absorption windows (i.e. absorption sites, especially the upper part of the small intestine) and some drugs have poor solubility in intestinal media. The drugs belonging to the second and third categories, and the drugs which are required for local action in the stomach, require a specialized delivery system. All the above requirements can be met and effective delivery of the drugs to the absorption window, for local action and for the treatment of gastric disorders such as gastro-esophageal reflux, can be achieved by floating drug delivery systems (FDDS). 7-12

The hydrodynamic balanced system (HBS) also called Floating drug delivery system (FDDS) is an oral dosage form (capsule or tablet) designed to prolong the residence time of the dosage form within the GIT. It is a formulation of a drug with gel forming hydrocolloids meant to remain buoyant in the stomach contents. Drug dissolution and release from the dosage form retained in the stomach fluids occur at the pH of the stomach under fairly controlled conditions 3. The retentive characteristics of the dosage form are not significant for the drugs that:

However, the system can be used for most of the drugs where controlled (sustained) release of the dosage form is desired by the oral route.

The formulation of the dosage form must comply with three major criteria for HBS.

It must have sufficient structure to form a cohesive gel barrier.

It must maintain an overall specific gravity less than that of gastric content.

It should dissolve slowly enough to serve as a “Reservoir” for the delivery system.18-22

TABLE 1:MATERIALS USED IN THE STUDY

Stock solution: 100mg of Ranitidine HCl was weighed accurately and transferred into a 100 ml volumetric flask. Then the volume was made upto 100ml using water.

Standard solution: 10ml of solution was withdrawn from the above stock solution and then made upto 100ml in another 100ml volumetric flask and this solution is considered as standard solution (100µg/ml).

Drug and excipient compatability studies by FTIR: The compatibility between the drug and polymer was evaluated by peak matching method.

There was no appearance or disappearance of the drug polymer mixture, which confirmed the absence of any chemical interactions between the drug and polymer.

The angle of repose of granules was determined by the funnel-method. The granules were allowed to flow through the funnel freely onto the surface. The diameter of the powder cone measured and angle of repose was calculated using the following equation.

Where, h and r are the height and radius of the powder cone, θ is the angle of repose.

The density apparatus was set for 100 tabs and after that the volume (Vf) was measured and continued operation till the two consecutive readings were equal. The bulk density and the tapped density were calculated using the following formulae.

Where, W= Weight of the powder

Carr’s index (CI) is an important measure that can be obtained from the bulk and tapped densities. In theory, the less compressible a material the more flowable it is

where, TD is the tapped density and BD is the bulk density.

It is the ratio of tapped density and bulk density. Hausner found that this ratio was related to interparticle friction and, as such, could be used to predict powder flow properties (Lachman et al., 1987).

Tablet hardness was measured by using Monsanto hardness tester. From each batch six tablets were measured for the hardness and average of six values was noted along with standard deviations.

From each batch, ten tablets were accurately weighed and placed in the friability test apparatus (Roche friabilator) at 25 rpm/min for 4 min.

To study weight variation individual weights (WI) of 20 tablets from each formulation were noted using electronic balance. Their average weight (WA) was calculated.

Ten tablets were weighed and taken into a mortar and crushed into fine powder. An accurately weighed portion of the powder equivalent to about 100 mg of TM was transferred to a 100 mL volumetric flask containing 70 mL of 0.1N HCl. It was shaken by mechanical means for 1h.Then it was filtered through a Whatman filter paper (No. 1) and diluted to 100 mL with 0.1N HCl. From this resulted solution 1 mL was taken, diluted to 50 mL with 0.1N HCl and absorbance was measured against blank at 314 nm.

Drug release was assessed by dissolution test under the following conditions:

n = 3, USP type II dissolution apparatus (paddle method) at 100 rpm in 900 mL of 0.1N HCl for first 2 hours and the phosphate buffer pH 6.8 from 3 to 12 hours, maintained at 37°C±0.5°C. An aliquot (5mL) was withdrawn at specific time intervals and replaced with the same volume of prewarmed (37°C±0.5°C) fresh dissolution medium. The samples withdrawn were filtered through Whatman filter paper (No.1) and drug content in each sample was analyzed by UV-visible spectrophotometer at 314 nm. 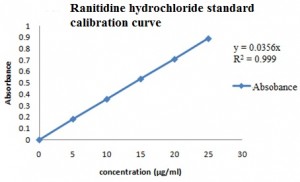 It was observed from table that from percentage cumulative size distribution it was found that around 2%of particles were above 250 microns and 98% were below 250 microns. 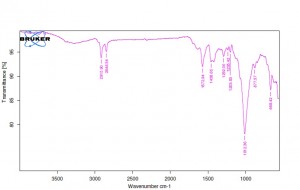 It was observed from the table that the formulation:

It was observed from the table that the variation in weight was within the range of ± 7.5% complying with USP pharmacopoeial specifications. The thickness of tablets was found to be between 2.81-3.84 mm. The hardness for all formulations was found to be between 5-6 kp. The friability was below 0.8% for all the formulations. The percentage drug content varied between 99.4-100.6 in different formulations indicating uniformity in the drug distribution among the tablets.

TABLE 10: IN- VITRO DISSOLUTION PROFILE FOR THE FORMULATION F1, F2, F3 AND F4 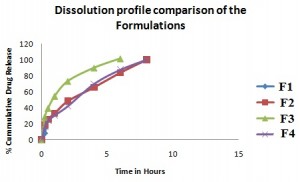 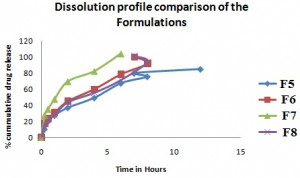 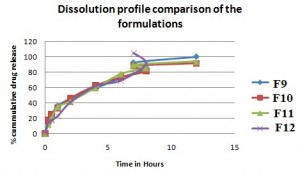 In-vitro dissolution profile for the formulation F13 and F14

TABLE 13: IN-VITRO DISSOLUTION PROFILE FOR THE FORMULATION F13 AND F14 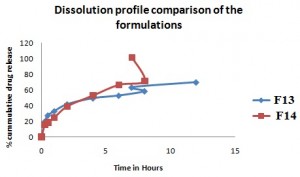 FIG.7: IN-VITRO DISSOLUTION PROFILE FOR THE FORMULATION F13 AND F14 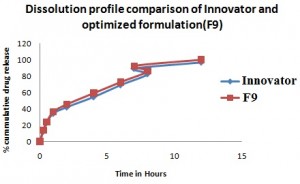 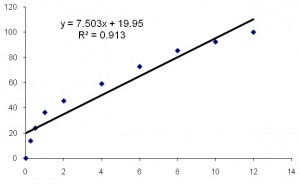 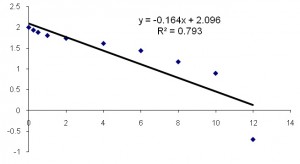 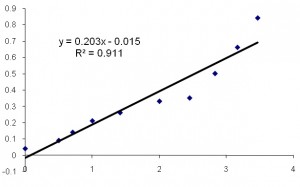 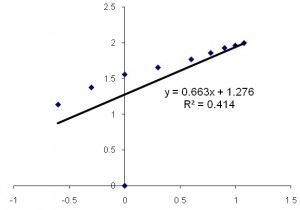 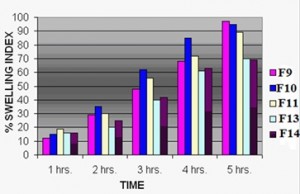 CONCLUSION: The main goal of this work was to develop Floating Effervescent tablets of Ranitidine Hydrochloride. The formulation design was expected to provide sustained release of Ranitidine Hydrochloride from the dosage form to treat for peptic and duodenal ulcers. Total 14 formulations were prepared using HPMCK100M, HPMCK4M, Guargum, Xanthum gum and were evaluated for various parameters. According to work plan the prepared tablets were evaluated for Hardness, Thickness, Friability, Invitro Buoyancy, Swelling Index, Dissolution profile, Weight, Drug content.