ABSTRACT: In the present study, metronidazole was used for preparing floating dosage forms that are designed to retain in the stomach for a long time and have developed as a drug delivery system for better eradication of Helicobacter Pylori in peptic ulcer diseases. Hydroxypropyl methylcellulose (HPMC K4M) and Carbopol-934P of different ratio were used to prepare Hydrodynamically Balanced Systems (HBS) by direct compression technique. The prepared HBS tablets were evaluated in terms of their pre-compression parameters and post-compression parameters like hardness, friability, weight variation, uniformity of drug content, percentage swelling, in-vitro floating studies, in-vitro drug release and short term stability studies. The floating properties and drug release characteristics were determined for the prepared HBS in 0.1 N HCl dissolution media. All the HBS formulations showed good in-vitro floating properties with an optimum concentration of gas generating agents; sodium bicarbonate and citric acid. The rate of drug release decreased with increased hardness of tablets. Optimum concentration of HPMC K4M (140 mg) and Carbopol-934P (10 mg) along with excipients was found to be beneficial in improving the drug release rate and floating properties. Among the eight formulations, F8 was selected as the best formulation as its lag time was 10.3 seconds, percentage swelling 119.91% at 4th hour and % drug release 75.62% at 8th hour with buoyancy time  >12 hours.

INTRODUCTION:Effervescent floating drug delivery systems generate gas (CO2), thus reduce the density of the system and remain buoyant in the stomach for a prolonged period of time and released the drug slowly at a desired rate 1. Floating Drug Delivery System (FDDS) has less density (<1.004gm/cm3) than gastric fluid so they buoyant in fluid and show sustained release 2.

Metronidazole is a nitroimidazole antibiotic medication used particularly for anaerobic bacteria and protozoa. Metronidazole is an antibiotic, amoebicidal and antiprotozoal. It is the drug of choice for first episodes of mild-to-moderate Clostridium difficile infection.

Metronidazole is indicated for the treatment of Helicobacter pylori eradication therapy, as part of a multi-drug regimen in peptic ulcer disease. It is usually taken two or three times a day 3. Administration of prolonged release floating tablet will result in prolonged retention of the drug in the gastric fluid. Thus, resulting in complete dissolution of drug in extended period of time by enhancing the drug absorption and thereby reduce the dosing frequency of the drug in therapy 4.

MATERIALS AND METHODS: Metronidazole, carbopol-934P, ethyl cellulose and microcrystalline cellulose was obtained from Yarrow Chem Products Mumbai. HPMC K4M was gifted by BAL Pharma, Bommasandra, Bangalore, in the year of 2013. Chemicals were all used as received.

Method: Floating tablets of Metronidazole was prepared by direct compression method. All the weighed quantities of ingredients except Magnesium stearate were blended in glass mortar uniformly and were passed through sieve number 80 to get fine particles. After sufficient mixing of drug as well as other excipients, Magnesium stearate was added and further mixed for additional 2-3 minutes to get uniformly blended powder mixture. Powder thus obtained was compressed into tablets on a 10 station single punch rotary tablet compression machine in the pharmaceutics laboratory (machine room) of The Oxford College of Pharmacy, Bangalore.

Evaluation: Fourier Transform Infrared Spectroscopy (FT-IR) study was conducted to test the compatibility of drug with the polymer. The flow properties of blends (before compression) were characterized in terms of Angle of repose, Bulk density and Tapped density, Carr’s index and Hausner’s ratio 5.

Physical evaluation of Metronidazole Floating Tablet 5: Hardness of the tablets was tested using a Monsanto hardness tester. Friability of tablets was determined in Roche friabilator. Twenty tablets were selected randomly from each batch and weighed individually to check for weight variation.

Initial weight of the tablet

RESULTS AND DISCUSSION: In the present study, floating tablets of Metronidazole were prepared by using HPMC as a matrix binding agent, carbopol as a gelling agent and sodium bicarbonate and citric acid as effervescent agent. Floating tablets of metronidazole were developed to increase the gastric residence time of the drug, so that they can be retained in stomach for longer time resulting in controlled release of drug. A total number of eight formulations (table 1) were prepared by direct compression technique after the confirmation of compatibility of Metronidazole drug with the selected polymer done using FT-IR study. The pre-formulation studies such as bulk density, tapped density, angle of repose, compressibility index and Hausner’s ratio were evaluated which were found to be within prescribed limits and indicated excellent flowing property (table 2).

The data obtained from physicochemical parameters such as hardness, friability, weight variation, drug content were in acceptable range (table 3).The swelling percentage of all the formulations was more than 90% thus revealed the better swelling behavior of all the tablet (table 4 and figure 1). 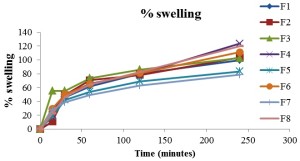 From in-vitro drug dissolution profile of floating tablets of Metronidazole, it was found that the formulation F8 containing 140 mg of HPMC K4M and 10 mg of carbopol-934P showed highest drug release (75.6245%) in comparison with other formulations (figure 3). Tablets of batch F8 have considerable in-vitro drug release, and also showing good floating lag time (10.7 ± 2.00 seconds) and good buoyancy time (>12 hours) (table 5). Thus the formulation F8 was selected as the most satisfactory formulation. 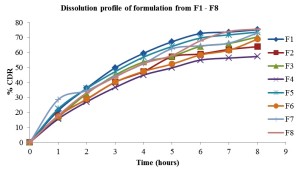 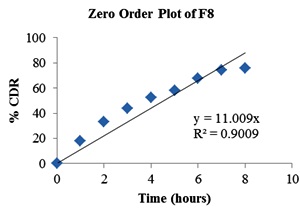 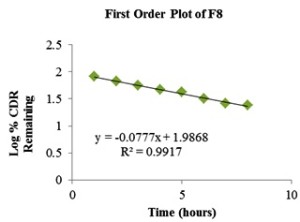 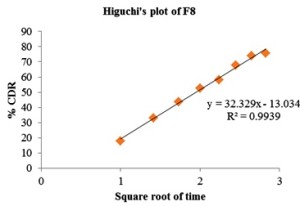 The most satisfactory formulations F8 was subjected to the short term stability studies by placing in varied conditions for sixty days. The in-vitro drug release and other formulation property of F8 showed no significant changes confirming that the formulations are stable after a period of sixty days (table 7).

CONCLUSION:This study discusses the preparation of floating tablets of Metronidazole. The effervescent-based floating drug delivery was a promising approach to achieve in-vitro buoyancy. The addition of polymer HPMC, Carbopol, Ethyl Cellulose and gas-generating agent sodium bicarbonate was essential to achieve in-vitro buoyancy. Addition of citric acid, to achieve buoyancy under the elevated pH of the stomach caused an enhancement in drug release. The polymer composition affects the drug release rate and the mechanism. Polymer swelling is crucial in determining the drug release rate and is also important for floatation. A lesser FLT and a prolonged floating duration could be achieved by varying the amount of HPMC and Carbopol and was found to be best in formulation F8 which shows a floating duration (>12hrs) having a controlled release characteristic (75.62%) in 8 hours. Good stability was observed for 2 months during stability studies.

Since the formulation showed sufficient release for prolonged period, the dosing frequency can be reduced and possible incomplete absorption of the drug can be avoided.

ACKNOWLEDGEMENT: The authors are thankful to the Principal, The Oxford College of Pharmacy, Bangalore, for providing necessary facilities for research work. They are also grateful to BAL Pharma, Bommasandra, Bangalore, for giving gift sample of HPMC K4M.