The purpose of this research work was to establish mucoadhesive buccal device of Rosuvastatin Calcium(RC) in the form of bilayered tablet. The tablets were prepared using natural gums like Xanthan gum, Tamarid gum, Gellan gum and Chitosan as bioadhesive polymers to impart mucoadhesion as well as permeation enhancement property to the formulation. Ethyl cellulose & magnesium stearate were added to act as an impermeable backing layer which gives unidirectional buccal drug delivery. Buccal devices were evaluated for different parameters such as weight uniformity, content uniformity, thickness, hardness, surface pH, swelling index, ex vivo mucoadhesive strength, ex vivo mucoadhesive time, in vitro drug release, and in vitro drug permeation. The results of study revealed that the formulation containing a combination of polymers like chitosan and natural gums shows suitatble drug permeation rate as well as mucoadhesive strength. So, it can be concluded that buccal mucoadhesive tablet is potential way of delivering Rosuvastatin in order to prevent its extensive first pass metabolism and to improve its bioavailibility.

INTRODUCTION: The interest in novel routes of drug administration occurs from their ability to enhance the bioavailability of drugs impaired by the narrow absorption window in the gastrointestinal tract. Drug delivery via the buccal route using bioadhesive dosage forms offers such a novel route of drug administration. This route has been used successfully for the systemic delivery of number of drug candidates 1-5.

Problems such as high first-pass metabolism and drug degradation in the harsh gastrointestinal environment can be circumvented by administering the drug via the buccal route 6-7. Moreover, buccal drug delivery offers a safe and easy method of drug utilization, because drug absorption can be promptly terminated in cases of toxicity by removing the dosage form from the buccal cavity.

It as an alternative route to administer drugs to patients who are unable to be receive dose orally. As well as bilayered buccal mucoadhesive approach cop up other drawback like loss of drug resulting from wash out with saliva to the GIT by applying the impermeable bilayer. Therefore, adhesive mucosal dosage forms are suggested for buccal delivery, including adhesive tablets 8-9, adhesive gels 10-11 and adhesive patches.

Here, permeation problem was overcome by using natural gum as penetration enhancers. There is a possibility for mucosal (local effect) and transmucosal (systemic effect) drug administration via buccal route. As well as in buccal mucosa maxillary artery blood flow is faster and (2.4 ml/min/cm2) than that in the sublingual, gingival and palatal regions, thus facilities passive diffusion of the drug molecules across the mucosa. The thickness of the buccal mucosa is 500-800 µm and rough texture, hence suitable for retentive delivery systems 12.

Rosuvastatin calcium (RC), a HMG CO-A Reductase enzyme inhibitor, is widely used in the treatment of Hyper-lipoproteinemia. Hyperlipidaemia is the condition indicating increase in lipid level. Both these conditions may cause narrowing and hardening of the arteries, i.e. atherosclerosis (coronary artery disease-CAD). Thus, hyperlipoproteinemias is one of the leading causes of ischemic heart disease, myocardial infarction and cerebral vascular accidents. Thus there is emergent need of the treatment of hyper-lipidaemia 13.

Although, it is well absorbed in the gastrointestinal tract, its bioavailability is low (20%), as a result of extensive first-pass metabolism. In the present study, the objective was to prepare mucoadhesive buccal device of RC, which ensure satisfactory drug release in a unidirectional fashion to the mucosa, to avoid loss of drug resulting from wash out with saliva 14-18.

Preparation of Mucoadhesive Bilayered Buccal Tablet: The tablets were prepared by wet granulation method. Medicated tablets containing 5 mg drug (RC) were compressed using flat face punch, 9 mm in diameter as per formula given in formulation Table 1. Before compression, the powder were screened through a 60 µm sieve and then thoroughly blended then granulation was done by using IPA as granulating fluid and granules were dried. Aluminum hydroxide was incorporated to avoid the stability problem of drug. To prepare bilayer tablets, the non-medicated layer was first compressed, then the medicated layer was filled into the die cavity and both were compressed together with compression force of 0.5 ton 19-22.

All quantities are in mg.

In this method the porcine buccal mucosa was adhered to the paddle of the dissolution apparatus with cyanoacrylate adhesive. Then at one side of each tablet of plain polymer was wetted with 50µl simulated saliva and pressed over porcine buccal mucosa for 30 secs. Then paddle was immersed in a basket of the dissolution apparatus containing 500 ml of 6.8 pH phosphate buffer, at 37oC. The paddle was rotated at 50 rpm. Time required to detach the tablet from the mucosa was measured 22-25.

Loss on drying: 1 gm natural gum powder was weighed and placed in weighing bottle. Then bottle was placed in drying chamber for 1 h. Then powder was reweighed (As per USP). Loss on drying was calculated by following formula.

W1 = weight of powder before drying.

W2 = weight of powder after drying.

Viscosity: 1% solution of gum was prepared and viscosity was measured by Brookfield viscometer.

pH: 1% solution of gum was prepared, pH was measured by pH meter.

Bacterial load determination: 1% solution of gum was prepared in distilled water, than incubated in agar medium for 24hrs at 37±0.5oC. Colony was counted in colony counter.

Surface pH: It is determined in order to investigate the possibility of any side effects in vivodue to pH difference between formulation and mucosal tissue. A combined glass electrode was used for his purpose. The tablet was allowed to swell by keeping it in contact with 5 ml of pH 6.8 phosphate buffer for 1 h 27-29. The pH was measured by bringing the electrode in contact with the surface of the tablets and allowing it to equilibrate for 1 min.

Both methods were performed as explained above in mucoadhesive strength determination of polymer.

Swelling Study: Six buccal tablets were individually weighed (W1) and placed separately in Petri dishes with 5 ml of phosphate buffer of pH 6.8. At the time interval of 1, 2, 3, 4, and 6 h, tablets were removed from the petri dish and excess water was removed carefully using the filter paper. Then the swollen tablet were reweighed (W2) and the percentage hydration was calculated using the following formula 29-32.

In-vitro Release Study: The United States Pharmacopeia (USP) XXIII rotating paddle method was used to study the drug release from the bilayered and multilayered tablets. The dissolution medium consists of 500 ml of phosphate buffer pH 6.8. The release study was performed at 37°C ± 0.5°C, with a rotation speed of 50 rpm. The backing layer of buccal tablet was attached to the glass disk with instant adhesive (cyanoacrylate adhesive). The disk was allocated to the bottom of the dissolution vessel. Aliquots (5 ml) were withdrawn at predetermined time intervals and replaced with fresh medium. The aliquots were filtered through 0.2-μm What-man filter paper and analyzed after appropriate dilution by UV spectrophotometer at 244nm wavelength 32-35.

In vitro Drug Permeation: The in vitro buccal drug permeation study of tablet through the porcine buccal mucosa was performed using Keshary-Chien type glass diffusion cell at 37°C±0.2°C. Fresh sheep buccal mucosa was mounted between the donor and receptor compartments.

The buccal tablet was placed with the core facing the mucosa and the compartments were clamped together. The receptor compartment (20-ml capacity) was filled with phosphate buffer pH 6.8., and the hydrodynamics in the receptor compartment was maintained by stirring with a magnetic bead at 50 rpm. A 1-ml aliquot was withdrawn at predetermined time intervals and analyzed for drug content using a UV-spectrophotometer at 244nm wavelength 17, 36, 37.

Calculation of Jflux for Rosuvastatin Calcium: The targeted Jflux (permeability constant) of drug was calculated by following formula. 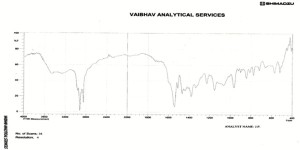 Surface pH: Surface pH of the formulations was ranging between 6.2 to 7.6, which is well within the limit of acceptable salivary pH range. Hence, it can be interpreted that none of formulation would any local irritation to buccal mucosal surface.

Swelling Study: The swelling studies were conducted for all formulations i.e. F1 to F13 and the results were shown in TABLE-3.The highest hydration (swelling) i.e. 35.22% was observed with the formulation F13. This may be due to quick hydration of polymers (chitosan and HPMC K4M). 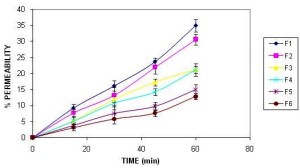 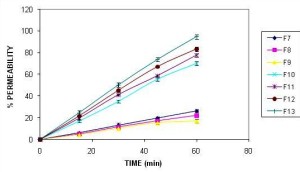 F13 shows all the characteristics for the immediate release buccal tablet was optimized.