ABSTRACT: Olanzapine is a thienobenzodiazepine class of drugs, which has been approved by the Food and Drug Administration (FDA), for the treatment of schizophrenia, depressive episodes associated with bipolar disorder, acute manic episodes, and maintenance treatment in bipolar disorder. Recently many formulations developed such as parenteral formulations to improve compliance in the treatment of schizophrenia and to treat agitation in patients with schizophrenia and bipolar mania. Olanzapine palmate long acting injection (depot) is a novel formulation of the atypical antipsychotic Olanzapine. The aim of the study is to prepare tablet with similar elegancy, therapeutically effective, bioequivalent formulations to that of zyprexa. Here Olanzapine tablets were prepared by wet granulation method using following ingredients: Lactose monohydrate, Mannitol, L-HPC, Microcrystalline cellulose, Crospovidone, HPC EX, HPC LF, Magnesium Stearate, HPMC, Poloxamer, pectin. The tablets were evaluated for weight variation, thickness, hardness, friability, disintegration, dissolution and stability study for the best formulation F10 which is having similar release profile as that of zyprexa. Content uniformity of F10 formulation is 99-99.6%. Total impurities for the F10 is found to be 0.257% which is less than innovator’s total impurities 0.352% and the assay value of F 10 is 99.01% as in case of innovator it is 98.06. The best formulation is F10 which is having similar release profile as that of zyprexa

INTRODUCTION:Olanzapine, a Thienobenzo-diazepine derivative, is an atypical antipsychotic agent with broad efficacy, eliciting a response in both the positive and negative symptoms of schizophrenia and bipolar disorder

The pharmacokinetics of Olanzapine is linear and dose proportional within the approved dosage range from 1 mg up to 20 mg. Olanzapine is well absorbed following oral administration in both fed and fasted states. Food does not affect the rate or the extent of Olanzapine absorption.

Time of peak concentration ranges from 2-7 hr 3, 4. Olanzapine is extensively distributed throughout the body, binding primarily to albumin (90%) and α1 -acid glycoprotein (77%).Olanzapine is eliminated extensively (40%) of the dose by first pass metabolism. Direct glucuronidation and CYP1A2 mediated oxidation are the primary metabolic pathways for Olanzapine. Phenotypic difference for CYP1A2 between races has been reported.

Schizophrenia is a group of heterogeneous, chronic psychotic disorders. Key symptoms include hallucinations, delusions and abnormal experiences, such as the perception of loss of control of one’s thoughts, perhaps to some outside entity. Patients lose empathy with others, become withdrawn and demonstrate inappropriate or blunted mood. 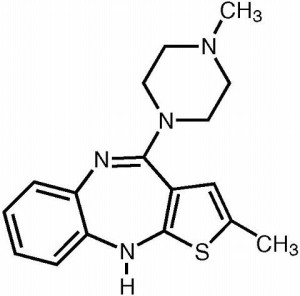 Methods: Olanzapine tablets are made by using wet granulation method .It involve the use of Mannitol (Pearlitol SD 200), and microcrystalline cellulose (Avicel-PH 112, PH 102) as diluents, cross povidone as binder, EX-HPC as diluents and magnesium Stearate as the lubricant. All ingredients except the lubricant were sifted through a # 40 sieve. The sifted material was mixed thoroughly in an octagonal blender for 15 minutes.

Then, the binder solution made of water and PVP was added in the mixer granulator till it form granule. Then, it is shifted to fluid bed drier and dried at 55oC till the optimum amount moisture present. All the granules passed through #24 sieve and extra granular excipients added and mixed for 5minutes. Finally magnesium Stearate was sifted through a #60 sieve and mixed with the blend for two minutes. The blend was compressed with 5 mm S/C punch. Then the core tablets were coated with HPMC, pectin, Poloxamer coating solution. The different formulations of Olanzapine tablets are given in Table 1.

Loss on Drying: The moisture content of the lubricated granules was analyzed by using the Halogen Moisture Analyzer. Approximately one gram of the blend was heated at 105°C until the change in the weight was no more observed by the instrument. The % loss in weight was recorded.
% LOD=100 (Initial Weight - Final Weight) / Initial Weight

Angle of Repose: The material is poured through a funnel; the tip of the funnel should be held close to the growing cone and slowly raised as the pile grows, to minimize the impact of falling particles. Stop pouring the material when the pile reaches a predetermined height or the base a predetermined width. Measure the angle 8, 9 of the resulting cone directly; divide the height by half the width of the base of the cone. The inverse tangent of this ratio is the angle of repose.

Bulk Density: The bulk density 10 of a powder is the ratio of the mass of an untapped powder sample and its volume including the contribution of the interparticulate void volume. Hence, the bulk density depends on both the density of powder particles and the spatial arrangement of particles in the powder bed.

Tapped Density: The tapped density of a powder is the ratio of the mass of a tapped powder sample and volume;

% Friability of tablets less than 1 % was considered acceptable.

In vitro Dissolution Study: In vitro drug release 14, 15 studies were carried out using the USP XXIII Dissolution Apparatus II (Paddle Type) at 50 rpm. The drug release profile was studied in 900 ml of 0.1N HCl solution maintained at 37±0.5°C. Aliquots of 5 ml of dissolution medium were withdrawn at specific time intervals (5, 10, 15, 20, 30 and 45 minutes), filtered, and the amount of drug released was determined by the UV-Visible spectrophotometer (Shimadzu UV 1601PC) at 258.8nm.A multimedia dissolution study was performed for the optimized batch (F 10) in 0.1 N HCl solution, acetate buffer solution (pH 4.5), and phosphate buffer solution (pH 6.8), and a comparison of the drug release was done with the marketed product (Zyprexa) in the same three media.

The standards or quality control tests were carried out on marketed tablets for comparative evaluation of developed and marketed product. The observations were reported in Tables 3, 4, 5, 6.

TABLE 4: COMPARISON OF DISSOLUTION PROFILE OF INNOVATOR AND F 10 IN pH 4.5 ACETATE BUFFER

TABLE 5: COMPARISON OF DISSOLUTION PROFILE OF INNOVATOR AND F 10 IN pH 6.8 BUFFER

TABLE 6: COMPARISON OF DISSOLUTION PROFILE OF INNOVATOR AND F 10 IN pH 7.4 PHOSPHATE BUFFER

FTIR Studies: IR spectra for Olanzapine and formulation of tablets were recorded in a Fourier transform infrared spectrophotometer (FTIR 1615, Perkin Elmer, U.S.A.) with KBr. (given in Fig. 2). 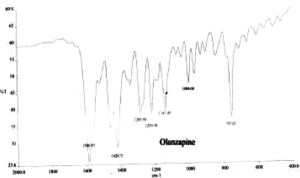 Differential Scanning Calorimetry (DSC) Studies: Samples of individual components as well as each drug-excipient 16, 17 were weighed (Mettler Electranic balance) directly in pierced Aluminium pans (5-10 mg) and scanned in the 50-300°Ctemperature range under static air, with heating rate of 10°C/min, using Shimadzu DSC-60 equipment. Sealed and perforated aluminium pans were used in the experiments for all the samples.

Temperature calibrations were performed using indium as standard. An empty pan sealed in the same way as the sample was used as a reference (given in Fig. 3): 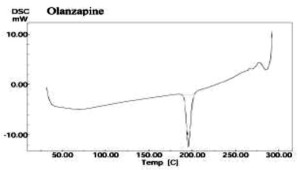 Compatibility Study: Olanzapine with different excipient taken in different proportion in vials and were kept in accelerated stability 18, 19 condition for 2 and 4 weeks and evaluated for appearance, moisture content and assay to confirm the compatibility.

RESULT AND DISCUSSION: The present investigation was carried out to develop immediate release tablet dosage form of Class -II drug, Olanzapine. Drug-excipients compatibility study of Olanzapine with different categories of excipients was carried out. The study was carried out at different conditions of temperature and humidity like 40°C/75%RH, 2–8°C, room temperature & found their physical appearance, impurity level and water content after 2 week, 4 weeks and compare with initial value. The result shows impurity level with some drug and excipient combination increases and also slight changes in appearance but all were compatible with Olanzapine.

Then, they were subjected to match in other two medium i.e. pH 4.5 acetate buffer and pH 6.8 phosphate buffer. 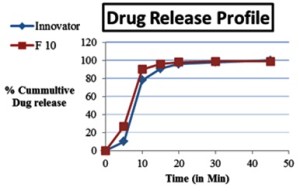 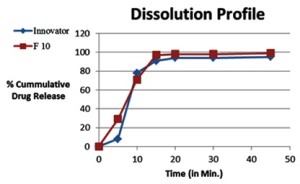 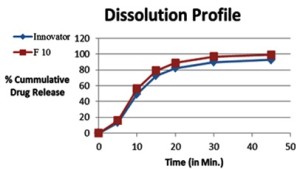 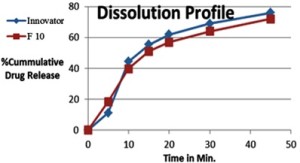 Stability Study: The stability studies of F 10 were done for 6 months by packing in HDPE container in humidity chamber (40°C/75% RH).The result for 1 month, 2 months, 3 months and 6 months obtained. All parameters of formulation including physical parameters, impurity profile (given in Table 7), content uniformity or dissolution profile were determined. Total  impurities for  the F10 was found 0.257% as compare to innovator whose total impurities  is 0.352% and the assay value of F 10 is 99.01% as in innovator its 98.06.The content uniformity physical parameter and impurities are within specification limit. So it indicates optimized formulation were stable.

CONCLUSION: Here, an attempt was made to prepare a bioequivalent immediate released solid oral dosage form of Olanzapine. The present formulation has identical dissolution profile as that of innovator Zyprexa. Here the formulation F10 has less impurity in accelerated stability condition as compared to innovator.

The antipsychotics have a superior effectivity as compared with conventional agents; however, Olanzapine has an excellent tolerability profile offering high patient acceptability that in turn, may promote patient adherence to medication and an improved quality of life. As such, we consider Olanzapine to be a first choice antipsychotic for the treatment of acute exacerbations of schizophrenia and bipolar disorder.

ACKNOWLEDGEMENTS            : The authors wish to thank the management and staff members of Malla Reddy Pharmacy College, Secunderabad, Andhra Pradesh to provide support and assistant to conduct this work in the laboratory. Special thanks to ALKEM LAB Ltd. to provide support during the tenure of work. Finally, thanks to Prof. Analía Odetto from IES Tafí del Valle Anexo Amaicha del Valle, Argentina, for editing the present article in English.