FORMULATION AND IN-VITRO EVALUATION OF PLGA NANOPARTICLES OF GEFITINIB

FORMULATION AND IN-VITRO EVALUATION OF PLGA NANOPARTICLES OF GEFITINIB

ABSTRACT: The aim of this study was to formulate and evaluate nine formulations of Gefitinib loaded PLGA nanoparticles by homogenization followed by solvent evaporation technique by use of biodegradable and biocompatible polymer i.e. PLGA. The effect of different concentrations of polymer and stabilizer (PVA) on particle size, zeta potential, %EE and drug release was studied. PLGA was used in different concentration of 120 mg, 150 mg, and 200 mg. Preformulation studies of FTIR and DSC was done to determine possible interaction between the drug and excipients. A5 showed 75.14% of release after 72 h and followed the fickian diffusion pattern of kinetic. SEM image showed the spherical morphology of nanoparticles.

INTRODUCTION: As mortality due to cancer continues to rise, advances in nanotechnology have significantly become an effective approach for achieving efficient drug targeting to tumor tissues by circumventing all the shortcomings of conventional chemotherapy. During the past decade, the importance of polymeric drug delivery systems in oncology has grown exponentially 1. In this regard, a wide range of submicron materials has been designed and engineered, especially for defeating cancer. Its applications expedite the development of contrast agents, therapeutics, drug delivery vehicles and theranostics. Nanoparticles for drug delivery applications have been composed of biodegradable and biocompatible polymers based on natural and/or synthetic materials 2.

The use of nanocarriers has resolved the undesirable characteristics of anticancer drugs such as low solubility and poor permeability in cells 3. One extensively investigated polymer is poly lactic-co-glycolic acid (PLGA), synthetic thermoplastic aliphatic biocompatible polyester. There are specific formulations based on PLGA and its related homopolymers, polylactic acid (PLA) and polyglycolic acid (PGA), which have been approved by the US Food and Drug Administration (FDA) for medical applications 4.

In the field of controlled drug delivery system, increasing attention is focused on biodegradable polymers such as PLGA because of its biodegradability and biocompatibility 5. PLGA nanoparticles are colloidal polymeric drug carriers that hold promise for oral drug delivery which represents by far the most common and convenient route of administration and also offer many advantages over conventional oral dosage forms, such as enhancing the oral bioavailability of those poorly absorbed drugs, protecting the encapsulated drugs in the polymer network 6.

In this study, an attempt was made to formulation and characterization of water-insoluble drug i.e. Gefitinib in the form of PLGA based nanoparticles by use of emulsification followed by homogenization technique. The prepared nanoparticles were characterized with regard to particle size, poly-dispersity index, zeta potential, morphological character, encapsulation efficiency, in-vitro release and kinetic study.

MATERIALS AND METHODS: Gefitinib was obtained as a gift sample from Hetero Drugs Limited, Hyderabad, India. PLGA was purchased from Lactel-Durect Corporation, USA. All other ingredients used were of analytical grade.

Preformulation Study: Preformulation studies such as FTIR and DSC were performed to determine the possible interaction between Gefitinib and the excipients used in the formulation of nanoparticles.

Preparation of Nanoparticles: PLGA nano-particles of gefitinib were prepared by homogenization method 7, 8. Preparation of gefitinib loaded nanoparticles was based on the oil/water emulsification solvent evaporation method. Both polymer and the drug were dissolved in acetone as an organic solvent. The solvent should be organic, miscible in water and easily removed by evaporation 9. The organic phase so formed was added dropwise to an aqueous phase, containing (Polyvinyl alcohol) PVA cold as a surfactant, using a high-speed homogenizer using digital ultra turrax S22 & T25 dispenser in an ice bath at 8000 rpm speed. The emulsion formed was magnetically stirred to evaporate acetone.

After evaporation of the solvent, the nanoparticles were recovered by centrifugation using REMI C-24BL cold centrifuge. Based on the initial trials formulations were prepared using general full factorial design (Qsutra Minitab 17 software) with two factors and three levels Table 1. Composition of prepared nanoparticles was tabulated in Table 2.

Evaluation of Nanoparticles: The supernatant was collected after centrifugation and used for the determination of % encapsulation efficiency (%EE) 10. Particle size distribution, polydispersity index, and zeta potential of all formulations was measured by dynamic light scattering using Malvern nano ZS-90.

In-vitro Release Study: In-vitro diffusion studies for gefitinib loaded nanoparticles were carried out by using the dialysis bag technique 11, 12, 13. The compartment was under continuous stirring at 37 °C ± 0.5. The drug which diffuses from nanoparticles in phosphate buffer saline was periodically withdrawn and the same amount was replaced with fresh phosphate buffer saline (pH 7.4). The absorbance of samples was analyzed by UV spectrophotometer using Agilent Technologies Cary 60 UV-Vis at 332 nm.

In-vitro Kinetic Study: The dissolution profile of all formulations were fitted to zero order, first order, Higuchi and Korsmeyer-Peppas model to ascertain the kinetic modeling of the drug release 14-17.

FTIR Spectroscopy: FTIR spectra of Gefitinib and the mixture of Gefitinib, PLGA and PVA showed that there was no possible interaction between the drug, polymer, and stabilizer used in the nano-particle formulation. It is shown in Fig. 1.

Differential Scanning Calorimetry (DSC): The DSC thermogram of Gefitinib, PLGA and PVA showed that there is no significant interaction between the drug, polymer and stabilizer used in the formulation of nanoparticles. The thermogram is shown in Fig. 2.

In-vitro Release Study: Release study was carried out for the formulations bearing % EE more than 55% for 72 h which shown in the following Fig. 3. A5 showed a higher release rate of 75.14 after 72 h. The release profile showed the initial burst release of 7.53% ± 2.12 for A5 which can be due to rapid dissolution of the adsorbed drug. After that, the slow release was observed on increasing the time duration and could be due to the penetration (diffusion) of release medium into the nanoparticles and dissolves the entrapped drug. A9 slow release rate was observed with results in an increase in the concentration of PLGA leads to tight and increase in the polymeric matrix around the entrapped drug. 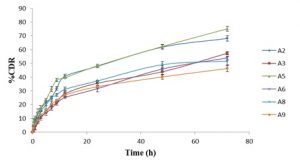 In Korsmeyer-Peppas model, the n values for all formulations were found to be close to 0.5 indicates fickian diffusion 21.

SEM: Scanning electron microscope (SEM) was used to determine the surface topography of the Gefitinib loaded PLGA nanoparticles. The result is shown in Fig. 4. It was observed that the nanoparticles are spherical in shape with no agglomeration. 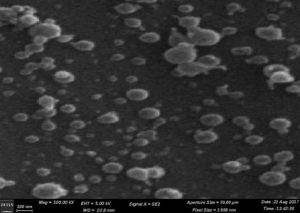 ACKNOWLEDGEMENT: Authors wish to thank the management of Acharya Institute, Bengaluru for providing the facilities required for this project and their continuous support and inspiration.