The aim of the present research work is to evaluate the impact of superdisintegrants in the formulation and evaluation of rapidly disintegrating tablets. In the present study, Loratadine is the model drug. Rapidly disintegrating tablets of Loratadine was prepared by direct compression method. In this method the different excipients used were Calcium Silicate (FM1000), Pharmattose DCl-21 (anhydrous lactose), Citric acid(anhydrous), Colloidal Silica (Aerosil), Sodium stearyl fumarate, Magnesium Stearate, Crosscarmellose Sodium (AcDiSol), L-HPC( Low substituted hydroxyl propyl cellulose), Microcrystalline Cellulose (Avicel pH-200), Aspartame, Orange flavor and Strawberry flavor. The formulations containing Crosscarmellose sodium and Low substituted hydroxyl-propyl-cellulose as superdisintegrants, disintegrated faster compared to the formulation containing Microcrystalline Cellulose (Avicel pH-200). Pre compression and post compression parameters were evaluated for all eight formulations (F1-F8).Infra-Red study revealed that all polymers and excipients used were compatible with the drug. In vitro drug release showed that almost drug was release in the range of 94-97% range in 10 minutes. Depending upon cumulative drug release, in vitro disintegration time, wetting time results, one formulation F8 was selected for stability studies and subjected to stability studies at 250C, 300C and 400 C for 1 month. Overall, formulation F8 was found to be the best formulation in direct compression method.

INTRODUCTION: Rapidly disintegrating tablets or fast dissolving tablets are gaining prominence as new drug delivery systems. These dosage forms dissolve or disintegrate in the oral cavity within a matter of seconds without the need of water or chewing. These are useful for pediatric, geriatric and dysphasia patients, leading to improved patient compliance. Nonetheless, oral dosing remains the preferred mode of administration for many types of medication due to its simplicity, versatility, convenience, and patient acceptability. In recent years, rapid-disintegrating oral drug formulations have been developed to overcome problems related to swallowing difficulties1. When such tablets are placed in the oral cavity, saliva quickly penetrates into the pores to cause rapid tablet disintegration2-7.

The rapidly disintegrating tablets are synonymous with Fast dissolving tablets; Melt in mouth tablets, Rapi-melts, Quick dissolving tablets, Mouth dissolving tablets, Orodispersible tablets. Their characteristic benefits in terms of patient compliance, rapid on-set of action, incresebio-availability and good stability make these tablets popular as a dosage form of choice8. Loratadine is long acting anti-histamine with selective peripheral histamine antagonistic activity. Loratadine is a piperidine derivative chemically known as ethyl-4- (8 chloro- 5, 6 dihydro- 11H-  benzo [5, 6] cyclohepta [1, 2-b] pyridine- 11- ylid piperidine carboxylate.The bioavailability of Loratadine following oral administration is about 40 to 45 % and significantly affected by the presence of food. The elimination half-life from plasma is reported to be about 3 hrs and is prolonged in renal impairment.

Angle of Repose: Flow properties of the granules were evaluated by determines the angle of repose and the compressibility index. Static angle of repose was measured according to the fixed funnel and free standing cone method of Banker and Anderson. A funnel with the end of the stem cut perpendicular to the axis of symmetry is secured with its tip at a given height (1cm), h, above graph paper placed on a flat horizontal surface. The granules were carefully poured through the funnel until the apex of the conical pile so formed just reached the tip of the funnel. Thus, with R being the radius of the base of the granules conical pile and angle of repose was calculated by using the equation9.

Where θ is the angle of repose

Bulk density: Both loose bulk density (LBD) and tapped bulk density (TBD) were determined. A suitable amount of powder from each formulation, previously lightly shaken to break agglomerates formed, was introduced into a 10 ml measuring cylinder. After initial volume was observed, the cylinder was allowed to fall under its own weight on to a hard surface from a height of 2.5cm at 2 seconds intervals. The tapping was continued until no further change in volume was noted. LBD and TBD were calculated using following formula10.

Wetting Time: A piece of tissue paper folded twice was placed in a small petridish (internal diameter = 6.5 cm) containing 6 ml of simulated saliva pH (phosphate buffer pH 6.8). A tablet was put on the paper, and the time required complete wetting was measured. Six trials for each batch performed; average time for wetting with standard deviation was recorded12.

Drug Content Estimation: Ten tablets were taken and amount of drug present in each tablet was determined as follows: Tablet was crushed in mortar and transferred to 100 ml flask. The powder was dissolved in pH 4.5.The sample was mixed by using Remi mixer for 5 minutes, after which it was filtered through whatman filter paper. The filtered solutions after appropriate dilution (1 to 10 ml) with 0.1 N HCL were analyzed by validated UV spectrophotometric method at λmax 280nm.

In Vitro Disintegration Time: In- Vitro disintegration time was performed by apparatus specified in USP at 50 rpm. Phosphate buffer 4.5, 900 ml was used as disintegration medium, and the temperature of which maintained at 37±2oC and the time in second taken for complete disintegration of the tablet with no palpable mass remaining in the apparatus was measured in seconds13.

Evaluation of In Vitro Dissolution Studies: In-Vitro dissolution study was performed by using USP type II Apparatus (Paddle type) [Electro lab (ETC-11L) Tablet Dissolution Tester] at 50 rpm. Phosphate buffer pH 4.5, 900 ml was used as dissolution medium which maintained at 37±0.5oC. Aliquot of dissolution medium (10ml) was withdrawn at specific time intervals (2min) and was filtered. The amount of drug dissolved was determined by UV spectrophotometer (shimadzu, Japan) by measuring the absorbance of the sample at 280nm. Three trials for each batch were performed and average percentage drug release with standard deviation was calculated and recorded14.

RESULTS AND DISCUSSION: In the present study, Loratadine Rapidly Disintegrating Tablets were prepared by using Crosscarmellose sodium, Low substituted hydroxyl propyl cellulose, and Microcrystalline Cellulose (Avicel pH-200) as superdisintegrants. A total number of eight formulations were prepared by direct compression technique. The value of pre-compression parameters evaluated was within prescribed limits and indicated good flow property. IR spectroscopy was used as means of studying drug-excipient compatibility and confirmed undisturbed structure of loratadine, which indicates no drug-excipient interaction (Figure 1 and 2). 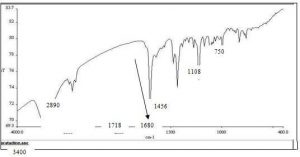 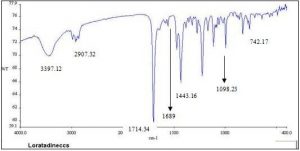 The data obtained of post compression parameters such as hardness, friability, weight variation, uniformity of content, thickness, wetting time, disintegration time are shown in table 2. The hardness was found to be in range of 3 to 4 kg/cm2 in all the formulations indicating good mechanical strength with an ability to withstand physical and mechanical stress conditions while handling. In all the formulations the friability value is less than 1% and meets the IP (Indian Pharmacopoeia) limits 15. All the tablets passed weight variation test as the % weight variation was within the pharmacopoeial limits.  The weight of all the tablets was found to be uniform with low standard deviation values indicating efficient mixing of drug, superdisintegrants and excipients. The percentage drug content of all the tablets was found to be between 88.68±0.1069 and 98.32±0.0450 % of loratadine, Table 3 which was within the acceptable limits.

TABLE 2: PROPERTIES OF GRANULATIONS AND IN-PROCESS PARAMETERS OF TABLETS

All values are expressed as mean ± standard deviation, n=3

The percentage drug release by each tablet in the In Vitro drug release studies were base on the mean content of the drug present in respective tablet (table 4). The result of in vitro disintegration of all the tablets was found to be within prescribed limit to satisfy the criteria of Rapidly Disintegrating Tablet. The values were found to be in the range of 24.62±0.0404 to 29.33±0.0450s (Figure 3). Overall the Rapidly Disintegrating Oral Tablets of Loratadine showed an average of 88 to 98 % drug release range at the end of 12 min which is as per IP specifications of 90-110 % and it was also observed that formulations F9 took shortest time to release the maximum amount of drug whereas the other formulations took more than 12 min to release the drug. 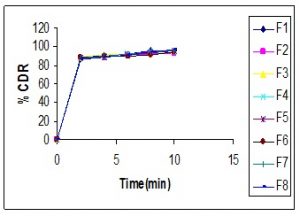 Comparison with other formulations, F9 shows a better drug release of 98.32 % at the end of 12 minutes. Further the formulation F9 was compared with marketed formulation (SERORM, sun pharmaceutical industries) and found to be superior in terms of dissolution profile (Figure 4). There was no significant variation in the physicochemical parameters, in vitro disintegration time, and in vitro dissolution profiles after 2 months stability study as per ICH guidelines Q1C. 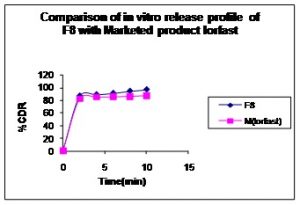 FIG. 4: COMPARISON OF IN VITRO RELEASE PROFILE OF F10 WITH MARKETED PRODUCT

CONCLUSION: Rapidly Disintegrating Oral Tablets of Loratadine is successfully prepared by using different proportions of superdisintegrants, Formulation F8 having Ac-Di-Sol (Crosscarmellose sodium) as the superdisintegrant is the best formulation among of all 8 formulations. Undoubtedly the availability of various technologies and manifold advantages of rapidly disintegrating tablets will surely enhance the patient compliance, low dosing, low side effect, good stability, and its popularity in the near future.

ACKNOWLEDGEMENT: The authors express their gratitude to Strides Arco Limited, Bangalore for providing drug gift sample and necessary facilities to carry out the research work.