ABSTRACT: The present study involves in the preparation and evaluation of floating tablets of Salbutamol sulphate by direct compression method by using the hydrophilic polymer such as hydroxy propyl methyl cellulose (HPMC), Sodium carboxy methyl cellulose, Dextrin and Carbopol. Sodium bicarbonate, Tartaric acid and citric acid were incorporated as gas generating agent. The study aims to achieve different formulations using different polymers in order to find out the most suitable and successful type of polymer. The prepared tablets were evaluated in terms of thickness, average weight, hardness, friability, drug content uniformity, swelling index, in- vitro buoyancy study and in-vitro dissolution study. The formulated tablet Hardness was found to being the range of 2.6 to 3.8 kg/cm2, the % friability was in the range of 0.30 to 0.50. The Swelling Index and floating time of different formulations range from 1.78 to 16.15 and 8.15 to 12 hrs respectively.  In-vitro release studies were carried out using USP XXII dissolution test apparatus. The tablet containing Salbutamol sulphate was released from batch F1-F10 found to be 78.55 to 98.55 %. The release of drug from tablets sufficiently sustained for 8 hours by in vitro release study. From the ten formulations we found that the formulation containing Carbopol (F7) were showed the better sustain release when compared to the other formulations.

INTRODUCTION:Salbutamol sulphate is one of the widely used drugs for the treatment of bronchial asthma, chronic bronchitis and emphysema 1. The drug undergoes extensive first-pass metabolism and thus requires frequent administrations by oral route 2.

The recommended dose in adults and children is 2-3 inhalations every 4-6 h. More frequent administration is not recommended 7. Salbutamol sulphate is given by mouth in a dose of 2 to 4 mg three to four times a day 8. Salbutamol sulphate requires multiple daily drug dosage in order to maintain adequate plasma concentrations. A gastro retentive drug delivery system may be advantageous over conventional oral dosage forms and inhalers due to its ability to maintain prolonged therapeutic concentrations in the systemic circulation. Asthma being a chronic disease, and as most of the patients suffer from nocturnal attacks 9, there is need for drug delivery systems which maintains therapeutic concentrations for long duration.

Materials: Salbutamol sulphate obtained as gift sample from Sumac Pharma Pvt. Ltd., Hyderabad. The polymers Methylcellulose, HPMC, Microcrystalline cellulose were as gift samples from Micro Laboratory Limited, Bangalore. All other ingredients were of analytical grades and were used as procured.

Formulation of Floating Sustained Release Tablets: Floating matrix tablets were prepared by direct compression using different polymers like HPMC, Sodium carboxy methyl cellulose, Carbopol and other polymers. The compositions of the formulations are given in Table 1.

Evaluation of the Floating Sustained Release Tablets of Salbutamol sulphate:

A)    Angle of Repose 16: The frictional forces in a loose powder or granules can be measured by angle of repose. “This is the maximum angle possible between the surface of a pile of powder or granules and the horizontal plane”. The granules were allowed to flow through the funnel fixed to a stand at definite height (h). The angle of repose was then calculated by measuring the height and radius of the heap of granules formed.

A)    Tablet dimensions: Thickness and diameter were measured using a calibrated dial caliper. Three tablets of each formulation were taken randomly and thickness was measured individually.

Percentage friability of tablets less than 1% is considered acceptable.

D)    Tablet density 18: Tablet density is an important parameter for floating tablets. The tablet will float when its density is less than that of gastric fluid (1.004g/cc). The density was determined using following formula.

I)       In-vitro drug release study 26, 27: 400ml of 0.1N HCl was taken in a beaker and Teflon was placed in it. Then one tablet was taken and placed into it. The rpm of stirred was settled at 50 rpm and temperature 370+20C.After 1hr 7ml of dissolution medium was taken out. The medium was again replaced with 0.1N HCl. The samples were collected at every 1hr internal up to 8hr. To the collected samples 1ml of 3%sodium nitrate, 1ml of copper sulphate and 0.2ml of 1N HCl were added. Then it was warmed on a water bath for 10min and cooled to room temperature. Then the final volume is made up to 10 ml with 0.1N HCl. After 25 min the absorbance was measured at 525 nm against blank.

Post-compression parameters: Microscopic examination of tablets from each formulation batch showed circular shape with no cracks. The dimensions determined for formulated tablets were almost uniform in all the ten formulations and were found to be in the range of 4.025 mm to 4.034 mm. The diameter of the tablet ranges between 13.50 mm to 13.60 mm. The measured hardness of tablets of each batch ranged between 4.20 to 4.80 kg/cm2. The values of friability test were less than 1% in all the formulations ensuring that the tablets were mechanically stable. The percentage weight variations for all formulations were within the Pharmacopoeial limits of ±5% of the weight. The weights of all the tablets were found to be uniform with low standard deviation values.The percentage of drug content was found to be between 97.26±2.41% and 98.91±2.26% of Salbutamol sulphate, which was within acceptable limits.  Tablet dimensions, Hardness, Friability, Weight variation and Drug content uniformity of the tablets are listed in Table 4.

To provide good floating behavior in the stomach, the density of the device should be less than that of the gastric contents (1.004g/cm3). All the batches showed density below than that of gastric fluid (1.004). On immersion in 0.1N HCl solution (pH 1.2) at 370C, the tablets floated, and remained buoyant without disintegration. From the results it can be concluded that the batch containing HPMC polymers showed good buoyancy lag time (BLT) and total floating time (TFT). Formulation F7 containing Carbopol showed good BLT of 106 sec and TFT of more than 13 hrs. Carbopol was used as release retardant and it also provided an additional gelatinous layer to the formulation. Tablet density, Buoyancy lag time, Total floating time and Swelling Index is given in Table 5.

Results of in-vitro drug release studies indicated that the F7 (Carbopol-200 mg, Sodium Alginate-50 mg) and F9 (Dextrin 20 mg, HPMC 130 mg) had good sustained release. From the in-vitro dissolution data it was found that formulation F1, F3, F4, F5 and F8 containing HPMC released 85%, 85%, 88.55%, 90% and 98% respectively of drug within 8 hr of the study indicating that the polymer amount is not sufficient to control the drug release. F7 containing Carbopol (200 mg) alone released 78.55% of drug within 8 hrs. It concludes F7 had better-sustained release than the other formulation (F1 to F9). The optimized formulation F7 had better control over release rate. Percentage cumulative drug release of various Formulations (F1-F10) is given in the Table 6 and Fig 2. 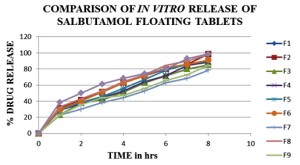 CONCLUSION: It was concluded that preformulation study was done initially and results directed the further course of formulation. The tablets were formulated using various concentrations of polymers such as HPMC, NaCMC, Sodium Alginate, Dextrin and Carbopol and effervescing agent (sodium bicarbonate).

Results of in-vitro drug release studies indicated that the F7 (Carbopol-200 mg, Sodium Alginate-50 mg) and F9 (Dextrin 20 mg, HPMC 130 mg) had good sustained release. From the in-vitro dissolution data it was found that formulation F1, F3, F4, F5 and F8 containing HPMC released 85%, 85%, 88.55%, 90% and 98% respectively of drug within 8 hr of the study indicating that the polymer amount is not sufficient to control the drug release.

F7 containing Carbopol (200 mg) alone released 78.55% of drug within 8 hrs. It concludes F7 had better-sustained release than the other formulation (F1 to F9). The optimized formulation F7 had better control over release rate.

ACKNOWLEDGEMENT: The authors are thankful to Sumac Pharma Pvt. Ltd. in Hyderabad for Sulbutamol sulphate given as a gift sample and to Management of Moonray Institute of Pharmaceutical Sciences for providing all the necessary facilities to carry out the work.