ABSTRACT:Microencapsulation is a well-known method that is used to modify and retard drug release. In this study, the preparation of Zidovudine loaded microcapsule was accomplished in order to assess the suitability of them for production of oral/vaginal sustained release multiparticulate dosage form of Zidovudine.Microcapsules were prepared using the solvent evaporation method. The effect of formulation variable like polymer: drug ratio was investigated on shape and surface characteristics of microcapsules (by scanning electron microscopy), percentage yield and drug entrapment efficiency, mean particle size and drug release profiles (dissolution test). Microscopic examination of microcapsules revealed that microcapsules were well-shaped and nearly spherical. FTIR studies revealed that no interactions were found between the drug and the polymer. The particle size of all the formulations were found to be satisfactory and within the range of 60.06 to 85.28 μm The percentage yield of all the formulation was found to be satisfactory except MC5. The percentage yield varied from 60.16 to 92.52% suggesting that the processing parameters did not affect the yield from the solvent evaporation method. Dissolution studies were carried out and zero order, first order and higuchi kinetics were implemented to predict the release kinetics. To justify the result Korsmeyer and Peppas model was applied and data shows that all formulations released the drug by diffusion following Fickian (n<0.5) transport mechanism.

INTRODUCTION: Zidovudine is active against human immunodeficiency virus (HIV-1&2) which is a retrovirus. Zidovudine is a first antiretroviral drug was developed in 1987. It is useful in prolonging life and postponing complications of acquired immunodeficiency syndrome (AIDS) or AIDS related complex (ARC), but does not cures the infection. The clinical efficacy of antiretroviral drug is monitored primarily by plasma HIV-RNA assays and CD4 lymphocyte count carried out at regular intervals 1, 2.

The main objective of any drug therapy is to achieve desired concentration of drug in blood or tissue which is therapeutically effective and nontoxic for extended period of time. This goal can be achieved by proper design of sustained release dosage regimen 3, 4. Microencapsulation is a common technique used in the production of sustained release dosage forms. Microcapsule based drug delivery system has received considerable attention in recent years. Numbers of methods have been devised to prepare microcapsules of desired size, shape and surface properties 5.Ethyl cellulose microcapsules have been extensively studied for controlled release 6, 7, 8. Ethyl cellulose being insoluble in water serves as good candidate for sustained release of drug. The aim of this study was to prepare ethyl cellulose microcapsules containing Zidovudine to achieve a controlled drug release profile suitable for oral or vaginal administration.

Solvent Evaporation Method 9, 10: Zidovudine microcapsules were prepared by the solvent evaporation method. This process was carried out in a liquid manufacturing vehicle. In this process the coating material Ethyl Cellulose polymer in different ratio; (1:2 to 1:7) is dissolved in a volatile solvent (20 ml acetone), which is immiscible with the liquid manufacturing vehicle phase (Light liquid paraffin). A core material (100 mg Zidovudine) to be microencapsulated is dissolved or dispersed in the coating polymer solution. With continuous stirring, the core coating material mixture is dispersed in the liquid manufacturing vehicle phase (30 ml Light liquid paraffin). Stirring is continuing for 3 hr to evaporate the volatile solvent and to obtain the appropriate size of microcapsule. Microcapsules were recovered by treating with petroleum ether or n-hexane. The code of the microcapsule is given as MC2 (1:2), MC3 (1:3), MC4 (1:4), MC5 (1:5), MC6 (1:6), and MC7 (1:7). The microcapsules prepared along with their individual composition are listed in table 1.

Where n= no of particles in each size range, d= mean of size range (µm) and D= Average particle diameter (µm).

Percentage Yield 13: The yield was calculated as the weight of the microcapsules recovered from each batch divided by total weight of drug and polymer used to prepare that batch multiplied by 100. All the experimental units were analyzed in triplicate (n=3).

Drug Content Estimation 14: Drug loaded microcapsules (100 mg) were dissolved in acetone (2 ml) and suspended in 100 ml of acetate buffer pH 4.7 solution. The resultant dispersion was kept for 20 min for complete mixing with continuous agitation and filtered through a 0.45 μm membrane filter. The drug content was determined spectrophotometrically (UV-1700, Shimadzu, Japan) at 267 nm using a regression equation derived from the standard graph (r2=0.999). All the experimental units were analyzed in triplicate (n=3).

Drug Entrapment Study 13: The drug entrapment efficiency (DEE) was calculated by the equation

Loose Surface Crystals Study 15: The Zidovudine loaded microcapsules were evaluated by loose surface crystal study to observe the excess drug present on the surface of microcapsules. From each batch, 100 mg of microcapsules was shaken in 20 ml of acetate buffer pH 4.7 for 5 minute and then filtered through Whatman filter paper 41. The amount of drug lost in filtrate was determined spectroscopically and calculated as a percentage of total drug content.

Bulk Density 16: A simple test has been developed to evaluate the flowability of a powder by comparing the poured density (ρBmin) and tapped density (ρBmax) of a powder and the rate at which it packed down. The product was tapped using bulk density apparatus for 1000 taps in a cylinder and the change in volume was measured.

The Carr’s index and Hausner ratio were calculated by using following formula;

Poured density (or porosity) 14: True densities of microcapsules and drug were determined psychometrically by employing n-hexane as a displacement fluid. Porosity (%) was calculated by the following formula

In-Vitro Drug Release Study 18:  In-vitro Zidovudine release rate was carried out using USP XXI basket type dissolution test apparatus using acetate buffer pH 4.7 as dissolution medium. Volume of dissolution medium was 900 ml and bath temperature was maintained at 37 ± 0.5°C throughout study period. The rotating rate of the basket was adjusted to 50 rpm. At different intervals, 5 ml of sample was withdrawn and the equivalent volume of the medium with the same temperature was added to the dissolution vessel. The absorbance values of the sample were measured by UV-Visible spectrophotometer at the wavelength of 267 nm.

RESULTS AND DISCUSSIONS: The Zidovudine loaded ethyl cellulose microcapsules were prepared by solvent evaporation method which is abridged in table 1. The spectrums of microcapsules were compared with the spectrum of original Zidovudine. The drug-polymer interaction study were performed using FT-IR spectrophotometer and six band appeared in Zidovudine spectrum at 3405, 3343, 1093, 1668, 1697, 2911 and 2957 cm-1due to the formation of N-H, O-H, C=O, C-H linkage respectively, identified in the formulation spectrum, confirming no interaction between the drug and the polymers as shown in fig. 1-3.

The percentage yield varied from 60.16 to 92.52% suggesting that the processing parameters did not affect the yield from the solvent evaporation method. The drug content found in formulation MC4 is higher and lower drug content was found in formulation MC6 and formulation MC2, MC3, MC5, MC7 drug content was found in less than 20 mg, as shown in table 3. Drug entrapment efficiency (DEE) of MC4 and MC7 formulation was found to be high because, the drug solubility in external phase was very less and the drug is fully dispersed in the polymer phase by continuous stirring for a longer period. The loose surface crystal study helps to estimate the excess amount of drug attached on the surface of microcapsules after a successful drug entrapment. The least value obtained indicates the proper encapsulation and minimum drug loss. The results are tabulated in table 4. 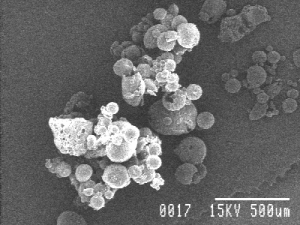 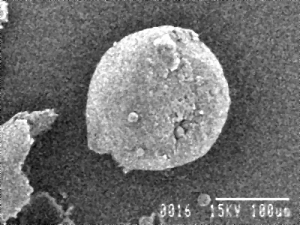 All the formulations were found to be release Zidovudine in a sustained manner for a prolonged period over 24 hour and it can be seen that the MC4 shows only 63.36% cumulative drug release over the period of 24th hr where all other formulations give more than 70% drug release in the same period of time. To describe the kinetic of drug release from microcapsule, release data was analyzed according to different kinetic equations. The zero order, First order, and Higuchi model kinetic are described in all microcapsule formulations and abridged in fig. 6- 8, and table 6. The formulations MC2 and MC6 obey first order kinetic and has dependent on formulation variations. The formulations MC3, MC4, MC5 and MC7 followed Higuchi square root kinetic and have diffusion controlled release rate which is dependent on concentration of release retarding polymer with process variables. To justify the result Korsmeyer and Peppas model was applied and data shows that all formulations released the drug by diffusion following Fickian (n<0.5) transport mechanism.

CONCLUSION: The solvent evaporation method was successful in production of Zidovudine loaded ethyl cellulose microcapsules. The yields of preparation and drug entrapment efficiencies were good for all microcapsules obtained.  However MC4 shows the more sustained drug release characteristic (63.36%) over 24 hr of time as compare to the other formulations so may be suitable for preparation of sustained release oral or vaginal tablets.