ABSTRACT: The main aim of the extended release tablets is to reduce the dose frequency and to improve the patient compliance. The objective of the present study was to formulate and optimize the extended release tablets of Pramipexole dihydrochloride monohydrate for 24hrs, which made the advantage of this formulation as once daily with more patient compliance. The combination of different hydrophilic polymers and hydrophobic polymer in varying concentrations were used to get the desired extended release profile over a period of 24 h. The drug and excipients mixed granules was subjected to evaluate the physical properties like angle of repose, bulk density, compressibility index were found to be satisfactory. The hydrophilic polymer Hydroxy propyl methyl cellulose (HPMC K200M) at 41.7%  and( HPMC E 3LV) at 5%  in combination with hydrophobic polymer (Eudragit L100) at 5% level produced desired extended release Pramipexole dihydrochloride monohydrate matrix tablets. The in vitro drug release of optimized formulation (F9) was 99% and was more release than innovator product of Mirapex ER (94.5%) which extended up to 24 h. The drug release pattern from the optimized matrix formulation (F9) was diffusion controlled obeying Higuchi equation, and by Non-Fickian mechanism obeying Koresemeyer – Peppa’s equation. The innovator product Mirapex ER (0.375mg) drug release profiles were shown to be followed first order release kinetics. The prepared once daily extended release Pramipexole dihydrochloride monohydrate tablets in combination of hydrophilic (HPMC K200M), (HPMC E 3LV) and hydrophobic (Eudragit L100) polymers, is a suitable one to treat the Parkinson’s disease.

INTRODUCTION:Parkinsonism also known as Parkinson’s syndrome, atypical Parkinson’s, or secondary Parkinson’s is a neurodegenerative disorder. It is characterized by tremor, hypokinesia, rigidity, and postural instability.

Many factors are directly or indirectly leads to Parkinson’s disease (PD), especially environmental factors like pesticides, herbicides, trace metals, cyanides and genetic factors of parkinsonism with an autosomal-dominant pattern of inheritance.  Approximately 4.5 to 16 per 100.000 persons / year are estimated incidence of PD. In the US the prevalence of PD is between 175 to 350 / 100000 population. Parkinson’s disease is also associated with eventual disability or death. Untreated PD had a mortality rate of 80 % within 10 years of diagnosis, but even successfully treated PD patients without dementia still experience a shortened life span. Since the introduction of PD, Dopaminergic pharmacotherapy remains the mainstay of the treatment of motor symptoms of Parkinson’s disease 1. Recently, Pramipexole dihydrochloride monohydrate controlled release form was approved in the United States for treatment as monotherapy in early PD 2, 3. Sleepiness and leg edema are most common Side effects of Pramipexole dihydrochloride monohydrate that appear to occur more frequently than seen with other dopamine agonists 4, 5, 6, 7.

Hydrophobic polymers, along with a hydrophilic matrix are suitable for drugs with high water solubility to develop extended release dosage forms. Hydrophobic polymers like Eudragit L 100 provide several advantages; it shows good stability at varying pH values and low moisture level. Eudragit L 100 is anionic copolymer based on methacrylic acid and methyl methacrylate. Hence, in the present work, an attempt has been made to develop once daily extended release matrix tablets of Pramipexole dihydrochloride monohydrate using hydrophilic polymers such as hydroxypropyl methylcellulose (HPMC) along with hydrophobic anionic polymer like Eudragit L-100.

Procedure for Formulation of Extended Release Matrix Tablets: Conventional wet granulation technology was opted for preparing the extended release tablets of Pramipexole dihydrochloride monohydrate. Drug and intragranular excipients such as lactose monohydrate, microcrystalline cellulose, HPMC K4M, HPMC 3LV and Eudragit L 100 were shifted through #40 mesh and were blended together to produce 100 tablets. The aqueous solution of PVP K 90 (1: 9) was added to produce damp mass. The wet mass was passed through # 16 mesh and dried in hot air oven at 65oC for 1 hr. The dried granules were then passed through # 20 and # 40. Aerosil200 and stearic acid were passed through # 80.

The extra-granular materials such as HPMC K200 M, microcrystalline cellulose 112 were weighed and mixed with above dried granule for 5 min. The final blend was evaluated for angle of repose, bulk, tapped density to determine the flow properties. Prepared granules were compressed using 9.5 mm flat punches on 15 station rotary tablet compression machine (Cadmach). The tablets were evaluated in terms of physicochemical parameters like weight variation, friability, hardness, thickness and in-vitro dissolution. The formulae for preparation of matrix based extended release tablets of Pramipexole dihydrochloride monohydrate with different concentrations of HPMC and Eudragit L100 polymers are given in Table 1.

Angle of Repose: By usingthe funnel method the angle of repose of granules was determined and it was calculated using the following equation 11.

Weight variation: In each batch 20 tablets were individually weighed in grams on an electronic balance. The average weight was reported.

Tablet thickness: The thickness of 10 tablets was measured individually in millimetres by using a digital micrometer. The average thickness was reported.

Friability: Twenty (20) tablets were selected from each batch and weighed. Each group of tablets was rotated at 25 rpm for 4 minutes (100 rotations) in the tablet friabilator (Electrolab). The tablets were then dusted and reweighed to determine the loss in weight. Friability was then calculated as percent weight loss from the original tablets.

In vitro Drug Release: The in-vitro dissolution profile of each formulation and innovator MIRAPEX ER (0.375mg) was determined on a USP XXIV dissolution apparatus type II by using pH6.8 Phosphate buffer. The Paddle rotation was adjusted to 100 rpm, the temperature being maintained at 37± 0.5ºC throughout the study. 5 ml of the sample of dissolution medium was withdrawn and replaced with the dissolution medium. Samples were filtered through filter paper 41 and were analyzed 1 hr interval spectrophotometrically at 260nm (Shimadzu).

To evaluate the mechanism of drug release from Pramipexole dihydrochloride monohydrate extended release tablets, data  was plotted in Korsemeyer equation, as log cumulative percentage of drug released vs log time, and the exponent ‘n’ was calculated through the slope of the straight line.

Where, Mt/M∞ is the fractional solute release, t is the release time, K is a kinetic constant characteristic of the drug/polymer system, and n is the diffusional release exponent indicative of drug release mechanism 19. An exponent value of 0.89 is indicative of Case-II Transport or typical zero-order release 20.

Physical characterization of the prepared granules:

Angle of repose: The angle of repose of all the formulations were determined by using funnel method & were found to be 24o62”- 29o21” and found to be within the prescribed IP limits of good flow (20-30).

In vitro Drug Release: The In vitro dissolution studies were performed for all the formulation of tablets including commercial formulation using USP XXIV type II tablet dissolution tester employing Paddle type at 100 rpm using 900 ml of 6.8 pH phosphate buffers as dissolution medium. Release profile of innovator product Mirapex ER tablets of 0.375mg was performed and described in Table 4. The in vitro drug release profiles of formulation (F9) and innovator product (Mirapex ER tablets, 0.375mg) was shown in Table 4 & Figure 2. From Table 4 & Figure 1, it was evident that formulation F9 having the hydrophilic polymer concentration HPMC K200M at high level (41.7 %), HPMC E 3LV at (5%) and the hydrophobic polymer concentration Eudragit L100  at lower level (5%)  showed 99% drug release profile  within 24h  was observed.

The zero order plots of formulations were found to be fairly linear as indicated by their regression values. Therefore, it was ascertained that the drug release from tablets followed first order kinetics, to confirm the mechanism of drug release from polymers; the data’s were computed and graphed according to Higuchi’s equation and Korsemeyer- Peppa’s equation. 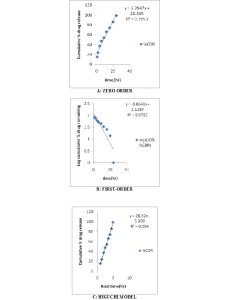 FT-IR studies: The major peaks obtained in the FTIR studies of pure drug Pramipexole dihydrochloride monohydrate like benzothiazole, C=C, N-H and aromatic C-H stretching’s remained unchanged when mixed with the polymers and in the formulation (spectra 1 & 2). So it was observed that there is no physical incompatibility between the drug and excipients. 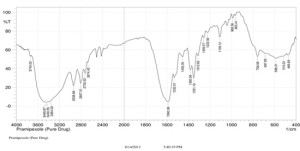 Stability Studies for (F9) optimized formulation: F9 formulation was selected for stability studies on the basis of high cumulative percentage drug release. Stability studies were conducted for 3 months under different conditions like 25oC ± 2oC / 60% RH ± 5% RH, 300c ± 20oC/ 65% RH ± 5% RH and 40oC ± 2oC/75%± 5% RH according to ICH guidelines. From these results, it was concluded that, formulation F9 is stable and retained their original properties with minor differences and proved to be stable throughout the period of storage.

CONCLUSION: The hydrophilic matrix of HPMC alone could not control the Pramipexole dihydrochloride monohydrate release effectively for 24 hours. Based on the physicochemical characteristics and in-vitro release studies, F9 formulation was found to be optimized. The optimized formula of F9 matrix tablet prepared with hydrophilic polymer HPMC K200M (41.7%), HPMC E 3LV (5%) in combination with hydrophobic polymer Eudragit L100 (5 %) with PVP K90 as granulating agent was found to be a better system for once daily extended release of Pramipexole dihydrochloride monohydrate as 99% of drug release for 24hrs, when compared to innovator Mirapex ER (94.5%). Finally, it was concluded that it can be used for the relief of Parkinson’s disease which improve patient compliance and a potential for better symptomatic control, particularly in patients with early disease that can be managed with once daily dose.