INTRODUCTION:  Different types of phytochemicals have been identified in various parts of the pomegranate tree, including fruits and seeds. The major class of pomegranate phytochemicals is the polyphenols that predominate in the fruit 1.

Consumers across the world are becoming more interested in foods with health promoting functions as they gain more awareness of the links between food and health.

Epidemiological studies have revealed that consumption of fruits and vegetables with high phenolic content correlates with reduced cardio- and cerebro-vascular diseases and cancer mortality 2, 3.

There are many factors which affect the stability of polyphenols during processing and storage. These compounds are very sensitive to oxygen, light, acid, and alkaline, but relatively less sensitive to heat; therefore encapsulation by ionic gelation method was used to avoid their degradation. Microencapsulation is an economical method for the preservation of natural antioxidants by entrapping the ingredients in a coating material. Sodium alginate and pectin are of the most important carrier and coating agents used for the encapsulation of water soluble drugs, so it is important to evaluate the encapsulation of polyphenols in these materials.

Alginate is a linear unbranched polysaccharide composed of varying proportion of 1, 4- linked beta-D mannuronic acid (M) and alpha- L guluronic acid (G) residues. Alginate has a unique gel-forming property in the presence of multivalent cations, such as calcium ions in an aqueous medium, which takes place mainly at junctions in the G-G sequence rich chain region known as egg box junctions 4. Varying proportions of pectin were used in the formulations with alginate.

Pectin is a heterogeneous anionic polysaccharide present in the cell wall of most plants. It is non-toxic, almost totally degraded by colonic bacteria and is not digested by gastric enzymes. Pectin forms water insoluble complexes with several drugs and may be useful additive for sustained release preparations 5. The low methoxy polysaccharide, pectin with the degree of esterification less than 50% can form rigid gels by the action of calcium ions which cross link the galacturonic acid chains of pectin to yield hydrogels that are stable at low pH 6.

The main objective of the present study is to formulate polyphenols in sodium alginate or/and pectin beads to protect them from degradation. The effect of some formulation parameters on polyphenol loading efficiency, namely the use of pectin and sodium alginate combination was investigated. Furthermore, the in vitro release studies of alginate gel beads were evaluated in both simulated gastric fluid (SGF) and simulated intestinal fluid (SIF).

Extraction procedure: 1 g of dried and ground peel was placed in a thermostatic water bath shaker with 100 ml of DI water at 50°C for 20 min. The liquid extract was separated from solids by centrifugation at 2000 rpm for 10 min. The supernatant was transferred to a 100 ml flask, and DI water was added to make the final volume 100 ml as reported by Wissam et al (2012) 7.

Beads preparation with a single polymer: Beads were obtained by mixing 10 ml of the active component with 10 ml of the sodium alginate solution or pectin solution 3%. Once homogenized, 10 ml of calcium chloride solution 0.05 M was added to the alginate solution and was cured for 20 min at 25 °C. The beads formed in this process were maintained in the gelling bath to harden for 15 min. Then, they were centrifuged at 4,000 rpm and 4 °C for 15 min as proceeded by Pablo et al. (2011) 8.

Loading Efficiency: The amount of extract loaded in beads was estimated by dissolving the capsules obtained from 10 ml extract in sodium citrate (10% w/v) during 20 min for alginate capsules in a shaker at 37 °C and 125 rpm as reported by Lorena et al. (2007).9 The concentrations of extract loaded in the beads were determined by Folin-Ciocalteu according to the International Organization for Standardization (ISO 14502-1: 2005) 10. A blank of sodium citrate was also performed. The percentage of loading efficiency was calculated with the following equation:

DPPH Radical Scavenging Activity: The antioxidant activity was measured in term of hydrogen donating or radical scavenging ability using the stable DPPH method according to the method proposed by Brand-Williams et al (1995) 11. 250 µl of the extract was diluted with distilled water to 10 ml. Aliquots of 200μl of sample was mixed with 2 ml of 100 μM DPPH methanolic solution.

The mixture was placed in the dark at room temperature for 60 min. The absorbance of the resulting solution was then read at 520 nm. The antiradical activity was expressed in terms of the percentage reduction of the DPPH. The ability to scavenge the DPPH radical was calculated using the following equation:

Dissolution studies: The ability of the prepared microcapsules to release the polyphenols in the physiological environment of the stomach and the small intestine was assessed by conducting release studies in stimulated stomach and small intestinal pH, respectively. Dissolution test was conducted in duplicate using USP dissolution apparatus (paddle method) at 75 rpm and 37±0.5°C.

The beads prepared from 100 ml pomegranate peels’ extract were placed in basket. Initial release studies were conducted in 150ml of 0.1N HCl (pH 1.2) as simulated gastric fluid (SGF) for 2 hours. After this 50ml of 0.2M tri-sodium phosphate was added to the dissolution media as simulated intestinal fluid (SIF) and the pH adjusted to 6.8, the study at a pH of 6.8 was continued for 4 hours.

Samples were withdrawn at specified time intervals and volume was replaced immediately with an equal amount of fresh medium. Samples were suitably diluted and polyphenol release was analyzed using Folin-Ciocalteu’s method.

Optimization of loading efficiency: The gelled microbeads were formed by ionic interaction between the negatively charged carboxyl groups of polymers (sodium alginate or pectin) and the positively charged ion Ca++. The addition of the divalent ions such as Ca++ produced a partial neutralization of carboxylate groups present on the alginate chain, forming insoluble gelatinous microbeads. Pectin along with sodium alginate formed gel microbeads by ionic gelation with divalent calcium ions. Gelation occurred due to intermolecular crosslinking between the divalent calcium ions and the negatively charged carboxyl groups of pectin and sodium alginate molecules.

TABLE 1: EFFECT OF CO-POLYMER COMBINATION ON THE LOADING EFFICIENCY OF EXTRACTED POLYPHENOLS

This might be due to the presence of two types of protective layers in beads, one of calcium pectinate and other one of calcium alginate, which prevented the diffusion of polyphenols more effectively than a single type of layer only. Another factor that affected the loading efficiency is the Alginate Pectin Ratio. As the proportion of alginate was reduced the polyphenol content started to reduce. These results are also in agreement with Durga et al. (2009) and Azhar et al. (2011).13, 14 It can be explained that in combination, of two layers calcium alginate layer was more effective in prevention of diffusion of polyphenols than the calcium pectinate layer but there was an optimum ratio of these two polymers (sodium alginate: pectin 2:1), which was responsible for the maximum loading efficiency.

TABLE 2: EFFECT OF MICROENCAPSULATION ON THE FREE RADICAL SCAVENGING ACTIVITY OF EXTRACTED POLYPHENOLS

Dissolution studies: Polyphenol release pattern was affected by polymer nature as shown in Figure 1. But in both cases there was an initial burst release, this may be due to the water-soluble nature of polyphenols. It may also be possible that polyphenol particles were dragged on the surface of the beads during curing in aqueous surrounding medium, which resulted in initial burst release. 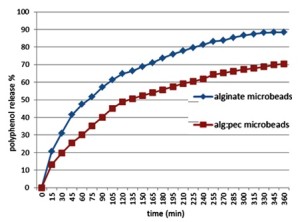 These microbeads beads can entrap polyphenols in sufficient amount and also protect their antioxidant activity. They can also successfully deliver them in gastro-intestinal fluids.

Thus without using any organic solvent and anytime consuming steps in the preparation of these microbeads, it is possible to develop an effective, cheap and nontoxic microbeads which can be used as food supplements.