FORMULATION AND INVITRO EVALUATION OF BUDESONIDE MICROSPHERES FOR COLON TARGETING

FORMULATION AND INVITRO EVALUATION OF BUDESONIDE MICROSPHERES FOR COLON TARGETING

ABSTRACT: Microspheres are one of the drug delivery systems used to target drug at the desired site. The objective of the present study was to prepare, characterize and evaluate colon targeted microspheres of budesonide for the treatment of ulcerative colitis. Microspheres were prepared by ionotropic gelation process using tripolyphosphate as cross- linking agent. Budesonide containing chitosan microspheres were coated with eudragit S-100 by solvent evaporation technique to prevent drug release in the stomach. Prepared microspheres were evaluated for particle size, surface morphology, entrapment efficiency and in vitro drug release. The microspheres formed have rough surface and spherical shape as observed in scanning electron microscopy. Particle size increases with increasing concentration of polymer and entrapment efficiency ranged from 77-92%. All values are statistically significant. It was observed that the coated microspheres showed no release in the simulated gastric fluid, negligible release in the simulated intestinal fluid and maximum release in presence of rat caecal content. Budesonide microspheres prepared with chitosan show promising result in in vitro studies.

INTRODUCTION: Colon was considered as a part of body solely responsible for absorption of water, electrolyte and temporary storage of stools, but now it is accepted as an important site for drug delivery. Targeted delivery ensures the direct treatment at the disease site, lower dosing, and minimizing side effects.   Drug targeting to colon is highly desirable for local treatment of a variety of bowel diseases such as ulcerative colitis, Crohn’s disease, amoebiasis, colon cancer and systemic delivery of proteins and peptide drugs 1, 2.

Corticosteroids are often used in the treatment of moderate to severe, active ulcerative colitis; however they are associated with a wide range of side-effects. Budesonide is a locally acting corticosteroid, and has highest affinity for glucocorticoid receptor 4. It is approved as a standard drug for the localized treatment of inflammatory bowel disorder due to negligible oral bioavailability, rapid clearance and no active metabolites 5.  To improve the specificity of drug release in the colon, enzymatically controlled delivery systems containing polysaccharides are widely used 6.

Chitosan (obtained by deacetylation of chitin) is a well-accepted cationic polymer for colon targeting, since it can be biodegraded by the microflora present in the human colon. Because of mucoadhesive and biodegradable property, chitosan can also be used as a polymer in the preparation of mucoadhesive microspheres.

Chitosan microspheres were prepared using ionotropic gelation process with counter polyaniontripolyphosphate (TPP) 7.  A32full factorial design was used for the formulation. Chitosan was dissolved by stirring for 60 min in a 2%v/v acetic acid solution to obtain transparent and homogeneous solution. Drug budesonide was dispersed in chitosan solution. Microspheres were formed by dropping  10ml of this bubble free dispersion of chitosan through 22# disposable syringe into  gently agitated (magnetic stirrer) 40ml of TPP solution. The formed microspheres were separated after 2 h by filtration, washed thoroughly with RO water and then air dried. The microspheres were then coated with eudragit S-100 polymer by solvent evaporation method 8. Experimental trials were performed for all nine possible combinations (Table 1). The amount of polymer (chitosan) and the amount of cross-linking agent (TPP) were selected as independent variables. The amount of drug release, particle size and entrapment efficiency were selected as dependent variable.

100 mg of the powdered microspheres from each formulation were taken separately and placed in 10ml of methanol for 1 h with occasional shaking. Then it was centrifuged and 1ml of the supernatant was taken and after appropriate dilution the absorbance was measured at 246nm by UV spectrophotometry 9. All readings were made in triplicate and the mean determined. The drug entrapment efficiency was calculated as:

The particle size analysis was done using optical micrometer. The eyepiece micrometer was calibrated using a stage micrometer. The microspheres were transferred into a clean slide. Added few drops of liquid paraffin. Dispersed the sample uniformly with a brush and placed a cover slip carefully. Measured the size of each particle in terms of eyepiece divisions. A total of 100 microspheres were measured in each sample.

These studies were carried out using a USP dissolution rate test apparatus 1(basket type) at 50 rpm. An accurately weighed amount (equivalent to 9mg) of the prepared microspheres filled in hard gelatin capsule was used for the study. The test was performed using simulated gastric fluid(pH 1.2) at 37± 0.50 C for the first 2h. Then the dissolution medium was replaced with phosphate buffer of pH 7.4 for 4h.Samples were withdrawn periodically and compensated with an equal amount of fresh dissolution media. The samples were analyzed for drug content spectrophotometrically by measuring the absorbance of budesonide at 246nm.

In vitro drug release in the presence of rat caecal content:

Before commencement of the experimentation on animals, the experimental protocol was subjected to the scrutiny of the Institutional Animal Ethical Committee of the Institution and was approved by the same. From the sixth hour onwards, in vitro drug release of microspheres was carried out in the presence of rat caecal content in pH 6.8 phosphate buffer to assess biodegradability of chitosan by colonic bacteria. Albino rats of either sex weighing between 150-200gm were selected for the study and maintained on normal diet. In order to induce the enzymes that specifically act on the chitosan during its passage through colon, the albino rats were intubated with teflon tubing and 1ml of 1% w/v dispersion of chitosan in water was administered directly into the stomach.

This treatment was continued for 5days. Animals were sacrificed before 30 min of commencing drug release studies. Rats were dissected, the caecum was isolated, ligated at both ends, cut loose and immediately transferred into simulated intestinal fluid of pH 6.8 previously bubbled with carbon dioxide. The caecal content was individually weighed, pooled and suspended in buffer to produce final caecal concentration of 4%w/v.

The experiment was carried out with a continuous supply of carbon dioxide using USP dissolution test apparatus with slight modification. A beaker of 150ml capacity containing 100ml of phosphate buffer pH6.8 with ratcaecal content was placed suitably in the dissolution vessel having a temperature maintained at 37±0.50C.Samples were withdrawn periodically and replaced with dissolution media containing rat caecal content bubbled with carbon dioxide. The volume was made up to 10ml, centrifuged, and the supernatant was filtered through 0.45 micron membrane filter. The drug content was determined spectrophotometrically. The study was carried out for a period of 24h.

Among the 9 formulations, formulation F7 exhibited good entrapment efficiency and release pattern. This formulation was selected for further study.

For the study of the shape and surface morphology of the microspheres scanning electron microscopy was used. (Jeol JSM-6390 LV, Japan).

The angle of repose was determined by the following method. This method employed a funnel that was secured with its tip at a given height above a graph paper that was placed on a flat horizontal surface. The microspheres were poured carefully through the funnel until the apex of the conical pile just touched the tip of the funnel. The radius and the height of the pile were determined.

Angle of repose (θ) is the maximum angle possible between the surface of a pile of the powder and the horizontal plane.

where, θ = angle of repose, h = height of pile, r = radius of the pile. Angle of repose less than 25 indicates excellent flow property.

Bulk density (Fluff density) is the ratio of mass of powder to the poured volume. Fluff volume is the volume occupied by the same mass, when gently poured into a measuring cylinder.

Bulk and tapped densities were measured using a 10 ml graduated cylinder. The microspheres were placed in the cylinder and the volume (bulk) noted.

The cylinder was then tapped 100 times and the volume (tapped) again noted. The bulk and tapped densities were calculated from the ratio of the weight and volume.

Where, Dt is tapped density and Db the bulk density. The value less than 10 shows excellent flow property.

The results were expressed as mean±S.D. The data of drug released at the end of each dissolution test were analysed using one way analysis of variance.

Chitosan is a commonly used polymer for the preparation of microspheres. Increasing the polymer concentration caused an increase in drug entrapment; possibly due to the higher ability of gel formation (Table 2). Tripolyphosphate concentration also showed a significant effect on this. Among the 9 formulations, F5 and F7 showed maximum entrapment efficiency of 92%. Minimum entrapment efficiency showed by the formulation F6 had minimum amount of polymer and cross linking agent. It could be found that increased concentration of polymer and cross- linking agent resulted in more drug entrapment.

There is significant difference in particle size among the formulations and therefore the variables have considerable effect on particle size of microspheres. Formulation F5 in all cases showed the maximum particle size(452µm) whereas formulation F6 exhibited the minimum value (190 µm) as shown in the Table 3. The polymer concentrations were 6% and 2% respectively. It could be found that increasing concentration of polymer increases particle size. This may be due to the increased viscosity of the polymer solution.

Drug release of microspheres increased significantly in presence of rat caecal content showing the susceptibility of chitosan polymer to colonic enzyme. Low pH, which is caused by the acidification of the colonic contents by the bacterial fermentation, may have an influence in the disintegration of chitosan microspheres in rat caecal content because chitosan is easily disintegrated in acidic condition. In vitro drug release from the formulations is illustrated in the Fig. 1. 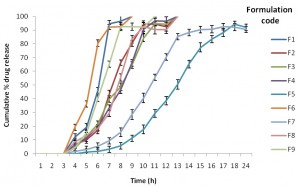 Visual examination of the SEM image indicated that the microspheres have good spherical geometry. Surface was found to be smooth in plain microspheres while some degree of roughness was observed in drug loaded microspheres indicative of effective cross- linking (Fig.2 a and 2 b). 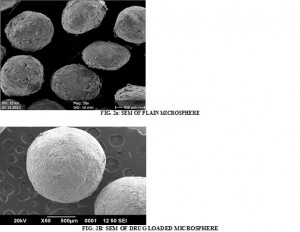 FIG. 2a: SEM OF PLAIN MICROSPHERE

The values of Angle of repose, Carr’s index, and Hausner ratio are shown in Table 4. The formulation exhibited good flow behaviour.

CONCLUSION: Budesonide microspheres were prepared successfully by using ionotropic gelation method. The method is simple and reproducible. Microspheres exhibited spherical shape and have good entrapment efficiency. The budesonide microspheres successfully retarded the drug release until it entered the colon. To assess the biodegradability of chitosan by the colonic microorganism, in vitro release studies in presence of rat caecal content were also performed. It was seen that the drug release from microspheres increased significantly in presence of rat caecal content. Thus the designed formulation was found to be suitable for colon delivery. Further in vivo studies are required to evaluate the therapeutic potential of the delivery system.