INTRODUCTION: Fast-dissolving dosage forms, also known as ‘fast-melt’, ‘fast-disintegrating’ dosage forms, are relatively novel dosage form that involves the rapid disintegration or dissolution of the dosage form into a solution or suspension in the mouth without the need for the water 1-5. The fast-dissolving tablets (FDTs) begin to disintegrate immediately after coming into contact with saliva, with complete disintegration normally occurring within 30-50s after administration 6. FDTs are designed for the purpose of improving patient acceptance and compliance. A survey of 6158 GP patients conducted in Norway indicated that approximately 26% of all patients do not take their prescribed medication as they encountered problems when swallowing conventional tablets 7. People of all ages can experience difficulty in swallowing conventional tablets and capsules, specially children and elderly patients. To overcome from all these problems, in this present investigation attempts were made to formulate meloxicam fast-dissolving tablets by vacuum drying technique using different volatile components.

Meloxicam is non-steroidal anti-inflammatory drug of the oxicam class, used to relieve the symptoms of dental pain, arthritis, primary dysmenorrhea, fever and as an analgesic 8. Meloxicam inhibits cyclooxygenase (COX) synthesis. This enzyme is responsible for converting arachidonic acid into prostaglandin H2. This is the first step in the synthesis of prostaglandins, which are mediators of inflammation. Meloxicam has been shown, especially at its low therapeutic dose, selectively to inhibit COX-2 over COX-1 9. A primary advantage of the oxicam family of drugs is their long half-life which permits once-day dosing.10 In gastric disease, lower dose of meloxicam is required 7.5 mg/day. Meloxicam is safer than other NSAID’s 11.

Preparation of Tablets: Meloxicam 7.5mg were taken then mixed with directly compressible diluent and superdisintegrant and different concentrations of camphor (1%, 3% and 5%) and menthol (1%, 3% and 5%) in a plastic container. Magnesium sterate, talc and aerosol were passed sieve no. 60, mixed and blended with initial mixture in the plastic container followed by compression of the blend. After compression the tablets were collected and vacuum dried at 60°C (Lab care Bangalore) until a constant weight was obtained to ensure the complete removal of sublimeable component to make the tablet porous (Table 1 & 2 ).

TABLE 1: FORMULA USED IN THE PREPARATION OF MELOXICAM TABLETS

Thickness of the tablets was determined by using dial caliper (Mitutoya, model CD-6  CS Japan), wetting time study, a piece of tissue paper folded twice was kept in a culture dish containing 6 ml of distilled water.  A tablet having a small amount of amaranth powder on the upper surface was placed on the tissue paper. The time required to develop a red color on the upper surface of the tablet was recorded as the wetting time (Table 3 & 4).

For drug content analysis, a total 10 tablets were weighed and powered. The powder equivalent to 7.5 mg of Meloxicam was taken and dissolved in phosphate buffer pH 7.4. After that an aliquot of the filtrate was diluted and analyzed spectrophotometrically (UV 1700 Shimadzu Corpn Japan) at 360 nm. In vitro dissolution of Meloxicam from tablets was monitored by using 900 ml of phosphate buffer pH 7.4 at 37 ± 0.5oC at 50 rpm using programmable dissolution tester (Paddle type, model TDT- 08 L, Electrolab (USP), India).

Aliquots were withdrawn at 1 min time intervals and were replaced immediately with same volume of fresh buffer medium. Aliquots, following suitable dilutions were assayed spectrophotometrically at 360 nm. The stability study of the tablets was carried out according to ICH guidelines by storing the tablets in stability chamber (Lab- care, Mumbai) at 40 ± 2o c /  75 ± 5 % RH for 3 months. The stability studies results are shown in Table no 6.

RESULTS AND DISCUSSION: The values of pre-compressional parameters were within prescribed limits as per USP XXVII and indicated good free flowing properties. The results are shown in Table no 3. The post compressional parameters results are shown in Table no 4. In all the formulation the hardness test indicates good mechanical strength. Hardness of the tablets decreased with increase in the amount of sublimeable component. Friability of all formulations was less than 1%, which indicates that the tablets had a good mechanical resistance. Drug content was found to be high (≥ 103.50%) and uniform in all the formulations. The tablet thickness was found to be 3.70 – 3.82. The weight variation results revealed that average percentage deviation of 20 tablets of each formula was less then ± 7.5 %, which provides good uniformity in all formulations.  The disintegration time of the tablets decreased significantly with increase in the concentration of subliming agent. All the formulations containing MCC as fillers showed minimum disintegration time which could be attributed towards disintegrating property of MCC. The tablets prepared by sublimation technique rapidly exhibits high pores and disintegrates the tablets rapidly. It may be due to their lowest hardness and maximum porous structure was responsible for faster water uptake, hence it facilitates wicking action of crosspovidone in bringing about faster disintegration12. Wetting time of tablets was decreased with the increase in the concentration of the subliming agent12. The dissolution of Meloxicam from the tablets is shown in the fig1. The results were compiled in Table 5. Dissolution of drug from tablet containing highest subliming agent (M3 and M6) were quicker than other formulations. 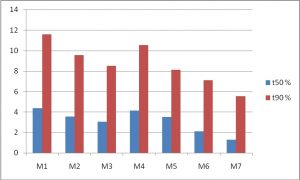 FIG 1: GRAPHICAL REPRESENTATION OF T50% AND T90% OF MELOXICAM TABLETS

It may be due to the highest porosity, lowest hardness and disintegrating property of MCC, which leads to faster water uptake hence it facilitates wicking action of crosspovidone in bringing about the faster disintegration and dissolution. 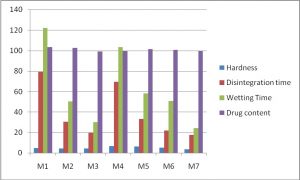 The dissolution rate of Meloxicam from formulation M7 was yielded best than other formulations, this may be due to highest porosity and lowest hardness, M7 containing maximum concentration of volatile component i.e. M7 contains 5% camphor and 5% menthol as volatile components. This leads to formation of more porosity within the tablets. The results also clearly revealed that, all the formulations were having enough mechanical strength, low wetting and disintegration time and good mouth-feel. All the formulations are having good mouth-feel because all tablets having mannitol as filler will produce sweetness and negative heat of solution, which leaves a pleasant, cooling sensation in mouth. The stability studies results revealed that decrease in the disintegration and wetting time was observed in all the formulations. Since during vacuum drying method, tablets were exposed to six hours at 60o C only, whereas 90 days and 45oC were used during stability studies. The long storage of 90 days at 45oC might have removed the trace amount of camphor and menthol.

CONCLUSION: From the results of disintegration time, wetting time and dissolution rate, it clearly indicates that the concentration of volatile components have direct effect on the dependent variables. Compared to all the formulations, M7 yielded best results in terms of dissolution rate. It can also be concluded that all the formulations were having mechanical strength, low wetting and disintegration time and good mouth-feel.