ABSTRACTThe purpose of present investigation was to achieve successful delivery especially to colon using microbially triggered, osmotically controlled approach. Prednisolone was chosen model drug for treatment of inflammatory bowel disease (IBD). Prednisolone-β-cyclodextrin complex were prepared and phase solubility study was carried out. Cellulose acetate solution containing chitosan was used to prepare semi-permeable. Face centered central composite design was employed to study the effect on independent variables (concentration of sodium chloride, polyethylene glycol, and chitosan), % cumulative release and disintegration time. Both independent variables, the proportion of chitosan (X1) and proportion of NaCl and PEG (X2) had an influence on the % drug release in both the media (buffers and buffer with rat ceacal content).   Formulations were evaluated for their Preformulation parameters and found within the specified limit. Formulation code F8 and S8 were the optimized batches with an in vitro release of 83.77 and 99.13 % respectively. The formulations containing PEG was found to be a promising drug delivery system better release kinetics

INTRODUCTION: Oral drug delivery is the most desirable and preferred method of administering therapeutic agents for their systemic effects. Oral drug delivery system can be classified into three categories: Immediate-release (IR) preparation, Controlled-release (CR) preparation and Targeted release preparation or site specific drug delivery system that requires spatial placement of drug delivery device at a desired site within the GI tract 1. Although oral delivery has become a widely accepted route of administration of therapeutic drugs, the gastro intestinal tract presents several formidable barriers to drug delivery. It has serious drawback in conditions where localized delivery of the drug in the colon is required or in the condition where a drug needs to be protected from hostile environment of the upper region of the gastrointestinal tract 2.

Colon specific drug delivery system should be capable of protecting the drug en route to the colon i.e. drug release and absorption should not occur in the stomach as well as in the small intestine, but the drug only released and absorbed once the system reaches to the colon 3. Colonic delivery offers numerous therapeutic advantages like drugs, which are destroyed by the stomach acid and metabolized by pancreatic enzymes are minimally effected in the colon 4. Colon targeted drug delivery systems have been gaining significant attention not just for providing more effective therapy to colon related disease, but also as a potential approach for systemic delivery of therapeutic proteins and peptide drugs. Colon is also a potential site for treatment of disease sensitive to circadian rhythms such as  asthma, angina, arthritis, etc 5, 6.

A significant milestone in oral NDDS is the development of the osmotic drug delivery system, an innovative and highly versatile drug delivery system. Osmotic drug delivery system (ODDS) differ from diffusion- based system in that; the delivery of active agent (s) is driven by an osmotic gradient rather than the concentration of drug in the device 10.  Osmotic systems utilizes the principle of osmotic pressure for the delivery of drugs.. They are also known as gastrointestinal therapeutic system. Alza corporation of the USA was first to develop an oral osmotic pump and still they leading in this field with the technology named OROS 11.

In the present research, colon targeted drug delivery system was formulated by using a combination of microbially triggered and osmotically controlled approaches. The β-cyclodextrin complexation was used to improve the solubility of the drug. Face centered central composite design of Design expert software 8.0.1.5, was used to formulate and optimized the formulations of the batches. Chitosan is natural polysaccharide serves dual functions, osmogen as well as microbially degrading agent. Face centerted composite design (FCCD) was used to studies the effect of independent variable i.e. Concentration of osmogens, Chitosan, Sodium chloride and Polyethylene glycol 4000 and 6000 on the dependent variable i.e. % cumulative drug release (%CDR) and disintegration time (DT).

Complexation of Prednisolone with β-cyclodextrin: β-cyclodextrin has been extensively used to modify drug’s physio-chemical properties. In the present study, drug-cyclodextrin complexes were prepared in two different ratios 1:2 and 1:4.

Physical mixing: For physical mixtures, Prednisolone and β-cyclodextrin were weighed accurately, mixed thoroughly by trituration in a mortar and sieved through a 0.25 mm sieve (# 60). The prepared physical mixture was stored in a dessicator until further evaluation.

Kneading method: The kneaded complex of Prednisolone and β-cyclodextrin was prepared by wetting the physical mixture in a mortar with a minimum volume of ethanol/water mixture (15/85, V/V) and kneading thoroughly with a pestle to obtain a paste, which was then dried under vacuum at room temperature, sieved through a 0.25 mm sieve (# 60) and stored in a dessicator until further evaluation.

Phase Solubility Study: The phase solubility technique illustrates the evaluation of the affinity between β-CD and prednisolone in water. The solubility measurement of prednisolone with β-CD was performed according to Higuchi and Connors. An excess amount of drug (50 mg) was added to conical flasks containing an aqueous CD solution of concentration 0-0.014 M. The flasks were placed in orbital shaker for 3 days at 25˚C. Aliquots of 2 ml were withdrawn and filtered suitably and analysed foe prednisolone by measuring absorbance at 242 nm. The intrinsic solubility in water was determined from sample without CD. Study was carried out in triplicates.

All other formulation and processing variables were kept invariant throughout the study. Cumulative % drug release (% CDR) and disintegration time (DT) were taken as the response variables. Similarly for batch S, amount of chitosan (X1) and amount of PEG 4000 and PEG 6000 (X2) were studied at 3 levels as shown in Table 1 and 2.

Granules were prepared by using starch paste as binder by sieve # 16 according to the formulae (Table 1 and 2) and dried at 54˚C for about 3 hrs. These granules were passing through sieve # 18/20 and lubricated with a mixture of talc and magnesium stearate. Granules were compressed into tablets (each of 220 mg) were formulated on minirotary tablet press (Fluidpack machinery) using 8 mm standard concave punches.

PD batch of pure prednisolone was prepared without any osmogen to evaluate the effect of osmogen onto the other batches. Formulations of different batches are shown in Table 3 and 4.

TABLE 2: THE AMOUNT OF FACTORS SELECTED FOR OPTIMIZATION AT DIFFERENT LEVELS (BATCH F AND S)

TABLE 3: FORMULAE USED FOR THE PREPARATION OF COLON TARGETING TABLETS OF PREDNISOLONE CONTAINING CHITOSAN AND NaCl AS OSMOGENS

TABLE 4: FORMULAE USED FOR THE PREPARATION OF COLON TARGETING TABLETS OF PREDNISOLONE CONTAINING CHITOSAN, PEG 4000 AND PEG 6000 AS OSMOGENS

Coating Process: About 1000 tablets of prednisolone were taken and allow to coating in a pan coater (12” conventional with 3 baffles) at 60-70 rpm and 50 ˚C temperature. Coating was carried out by the spray method and dried with the same.

Disintegration Test: Disintegration test was performed on each formulation for checking intactness of enteric coat. Disintegration apparatus (Electro lab Ltd., ED-2L) was used and I.P. method was followed. Six tablets of each formulation were tested for disintegration. Tablets were firstly tested in water for 5 minutes then in 0.1N HCL for 2 h (simulating gastric transit time) to see the damage to the coat. Afterwards, tablets were tested in the phosphate buffer pH 7.4 (simulating intestinal pH) till the coating dissolved. Temperature in each case was kept constant at 37±0.5oC. 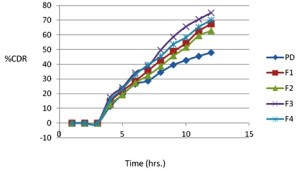 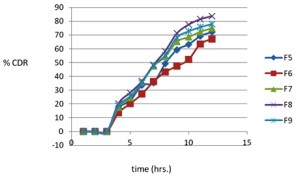 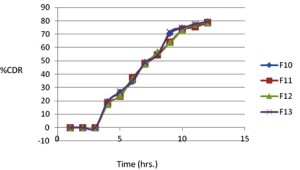 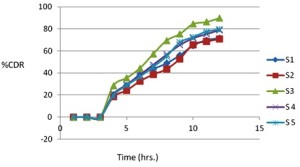 FIG. 4: IN VITRO % CDR OF A BATCH S1 TO S5 CONTAINING PEG AS SYNTHETIC OSMOGEN 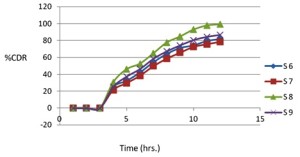 FIG. 5: IN VITRO % CDR OF A BATCH S6 TO S9 CONTAINING PEG AS SYNTHETIC OSMOGEN 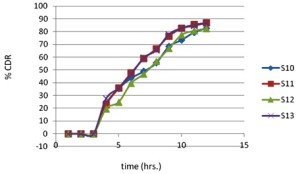 RSM for formulations of F batch

The polynomial equations comprise the coefficients for intercepts, first-order main effects, interaction terms and higher order effects. The sign and magnitude of the main effects signify the relative influence of each factor on the response. 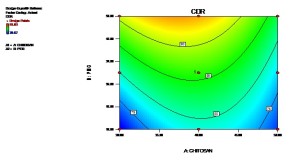 The polynomial equations comprise the coefficients for intercepts, first-order main effects, interaction terms and higher order effects. The sign and magnitude of the main effects signify the relative influence of each factor on the response.

Mathematical modeling to study the in-vitro release kinetics of optimized batches: To establish the order and mechanism of drug release, dissolution data of the optimized batches were fitted to four different kinetic models, namely. Zero order model, first order model, Higuchi model and Korsmeyer peppas model. The model for best fit was predicted from the value of R2. For an ideal fit, value of R2 was 1. Hence, the model which gives the R2 value nearest to 1 describes the order of drug release.

In-vitro studies in RCC: At last to evaluate the effect of colonic microflora on the rate of degradation of semi-permeable membrane containing chitosan, in-vitro dissolution was carried out in 6.8 buffer cotainining 4% rat ceacal content (RCC). The study was carried out for optimized batch to establish an in-vitro/in-vivo correlation. Anaerobic condition was maintained during the whole study by continuous supply of CO2 because of anaerobic nature of the colonic microflora.

Phase-Solubility Study: The phase solubility diagram of the prednisolone with β-CD is shown in figure 15.  The intrinsic solubility in water was determined from sample without β-CD. Study was carried out in duplicates. The intrinsic solubility was found to be 254 mg/L, slightly higher than the reported value 200 mg/L. The phase solubility diagram for prednisolone β-CD showed AL type curve according to Higuchi and Connors. The aqueous solubility of drug was increased linearly as a function of the concentration of β-CD.  Straight line was fitted to the AL type diagrams with regression coefficient 0.986. 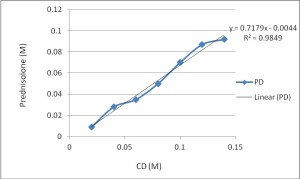 Fourier transform infrared spectroscopy (FTIR): From the IR spectras of the pure drug and complexes prepared by physical mixture and kneading method 1:2 and 1:4 ratio, it was observed that the intensity and shape of prednisolone characteristics peaks changed dramatically for the inclusion complex prepared by kneading method as compare to physical method. Out of two kneading complexes, 1:4 ratio showed better interaction than the 1:2 ratio.

DSC: DSC thermogram shows the thermal behavior of all the samples of drug-β-CD complex. Prednisolone has an endothermic peak at 244˚C which corresponds to the physical mixture of prednisolone with β-CD i.e. 229˚C but disappeared in thermogram of the complex indicating that PD forms inclusion complex with drug-β-CD complex. Inclusion complex by physical mixture did not show any appreciable changes but inclusion complex by kneading method showed two endothermic peaks at 226.71˚C and 301.92˚C due to formation of solid dispersion. 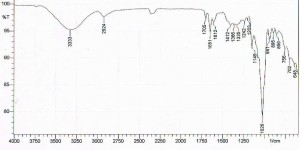 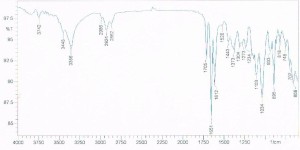 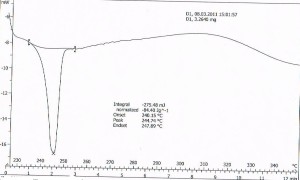 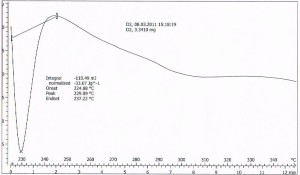 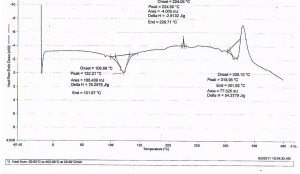 All the other parameters of the tablet were within the specified limits. The solution provided by the optimization software implied that from batch F containing Chitosan and NaCl, formulation  F8 was the optimized batch (83.77% in vitro release) while from S batch containing Chitosan and PEG, formulation  S8 was the optimized batch (99.13% in vitro release).  The DT  of both the batches was found to be optimum. All the batches found to be disintegrated over 3 hrs i.e. gastric transit time.

Firstly, solubility of prednisolone was enhanced by complexation with β-CD. The tablets were formulated according to the FCCD Software and coated with cellulose acetate solution to form a semi- permeable membrane. At last tablets were enteric coated with Eudragit L and S polymer to prevent its release in upper GI tract. The formulated core tablets contains different amount of synthetic osmogens i.e. NaCl and PEG 4000 and 6000. From the dissolution it was found that the formulation containing PEG as synthetic osmogen i.e. S batch shows the better release profile as compare to F-batch formulations containing NaCl as synthetic osmogen.

The PEG form solid-dispersion with the drug and hence shows better result. The effects of different formulation variables were studied to select the optimum formulation.The drug release is directly proportional to the amount of synthetic osmogens. The amount of chitosan in the core formulation had a profound effect on the amount of drug release. An optimum core formulation that benefited from suspending and osmotic effect of chitosan has been developed. Furthermore the physicochemical and digestible property of chitosan-cellulose acetate free films and in vivo/in vitro correlation of microbially triggered, osmotically controlled colon targeted drug delivery system are in progress to fully evaluate the system.