The objective of this study was to design and evaluate oral sustained drug delivery system for Metoprolol succinate using pH sensitive polymer HPMC and sodium alginate and to evaluate its efficacy in reducing the hypertension. The drug filler blend was mixed with various concentrations of hydrophilic polymers such as HPMC, sodium alginate and combination of both the matrixing agents. The tablets were prepared by wet granulation method. Matrix tablets were evaluated for weight variation, content uniformity, friability, hardness, thickness, swelling index, and in vitro dissolution. The assays of different formulations were determined and the drug content was found between 85-115%. The weight variation was observed to be within the prescribed limits for each formulation. In-Vitro drug release studies carried out with different formulation tablets in 0.1N HCl for 2hrs, pH 6.8 phosphate buffer for 12hrs. Up to 2 hr study the formulation shows low release in gastric medium (0.1N HCl). From the 2 hr up to 12 hr study percentage of drug release was increased in intestinal fluid (pH 6.8 buffer). In these studies, the F1, F3 and F5 formulations showed the better drug release in compared to others. By swelling index it was concluded that the tablet shows matrix type of release in the intestine. These formulations follow zero order release kinetics known by Higuchi plot. The matrix formulation F1, F3 and F5 showed sustained release of Metoprolol succinate by the diffusion mechanism. Studies reveal that HPMC, sodium alginate sustained release matrix tablets can drive and make available the intact drug for local action for hypertension treatment.

INTRODUCTION:A tablet is a pharmaceutical dosage form. It comprises a mixture of active substances and excipients, usually in powder form, pressed or compressed form a powder into a solid dose. The excipients can include diluents, binders or granulating agents, glidants (flow aids) and lubricants to ensure efficient tableting disintegrates to promote tablet break up in the digestive tract, sweeteners or flavors to enhance taste and pigments to make the tablet visually attractive. A polymer coating is often applied to make the tablet smoother and easier to swallow, to control the release rate of the active ingredient, to make resistant to the environment (extending its shelf life), or to enhance the tablet appearance.

A tablet can be formulated to deliver an accurate dosage to a specific site; it is usually taken orally but can administer sublingually, buccally, rectally or intravaginally. Tablets can be manufactured using different techniques, which are depending upon half life of active ingredient, and the route of administration.

The present innovation provides a new simple polymeric matrix tablet that delivers highly soluble drugs over long periods of time and easy to manufacture in which drug releases in continuous manner. This type of controlled drug delivery systems is known as matrix tablets. In this the drug is dispersed in swellable hydrophilic substances, an insoluble matrix of rigid non swellable hydrophobic materials or plastic materials.

More specifically, the drug is first granulated with or encapsulated in a swellable polymer such as gum to form granule. These granules dispersed in a matrix of a more swellable, erodible polymer, such as HPMC or Polyethylene Oxide and optionally include pectin. This invention has a potential to maximally release its drug content in a controlled manner over a long time period while achieving complete dissolution.

Literature survey was carried out to know the formulation aspects of matrix tablets, effect of HPMC, effect of PVP and sodium alginate.

The objective of this work was to formulate HPMC based matrix tablets of Metoprolol succinate to observe it’s in vitro release in treating hypertension as β- blocker.

Preparation of Hydrophilic Matrix Tablets: The tablets were prepared by wet granulation method. The corresponding amount of drug, hydroxypropyl-methylcellulose, sodium alginate, dibasic calcium phosphate, talc, magnesium state was accurately weighed. the powders were screened through screen #80 after mixing in a mortar for 10 min. the powder mixture was granulated using granulating solutions i.e., dichloromethane and polyvinyl-pyrrolidone 5%. The wet mass was passed through sieve #12 and granular material was dried in oven for1-2 hrs at 50oC. The dried granules were passed through sieve #20. After addition of lubricant and glidants, compression was carried out using 9 mm flat faced circular punches on single station tablet press (cadmach machinery, Ahmadabad, India). The total weight of the tablet was 200 mg. the composition of various formulations is given in table 1.

Calculate the average weight of the tablets;

Not more than two tablets of the individual weights deviate from the average weight (X) by more than the 7.5% deviation.

To examine this tablets are subjected to uniform tumbling motion for specified time and weight loss is measured. A maximum loss of not more than 1% is generally considered acceptable for most products.

The above stated buffer solution are used for the dissolution test. In these initially 0.1N Hcl (gastric fluid) was taken in the vessels of dissolution apparatus. The temperature was maintained at 37o±0.5oC. After reaching the desired temperature the tablets of each formulation were kept in individual baskets and fixed to the apparatus and dipped in to the buffer solution. The height from the vessel to the basket should be 2cm. These baskets were subjected to 50 rpm. Initial sample solution was collected at 30 min interval of time. After that at every 1 hr, the samples from each vessel were taken. Then, the buffer solution in each vessel was removed and again filled with the pH 6.8 phosphate buffers (intestinal fluid) and the baskets with tablets were dipped in it with 50 rpm. Samples were taken at every 1 hr and examined by UV visible spectrometer at 224nm for the percentage drug release up to 12 hrs.

RESULTS AND DISCUSSION: The present study focused on the formulation of matrix tablets by using pH sensitive polymer HPMC and sodium alginate and to evaluate its efficacy in reducing the hypertension. The matrix tablets of different formulation were evaluated for weight variation, drug content uniformity, hardness, friability, swelling index. The average percentage deviation of 20 tablets of each formulation was less than 5%, the content uniformity was ranged from 96.48%±0.54% to 101.25%±0.35%, the hardness and percentage friability of all batches ranged from 4.1±0.27 to 4.5±0.23 kg/cm2 and 0.808±0.02 to 0.843±0.01%, respectively, the swelling index of all formulations ranged 3.9 to 6.95.

In-Vitro Release Studies: The result of in- vitro drug release studies carried out with different formulation tablets in 0.1N HCl for 2 hrs and in ph 6.8 phosphate buffer for 10 hrs in order to investigate the potential of formulation to withstand the adverse environment of upper GIT are shown in (table 2 and graphed in graph 1 & 2). Up to 2 hrs study the formulation shows low release in gastric medium (0.1N HCl). From 2 to 12 hrs study percentage of drug release was increased in intestinal fluid (pH 6.8 phosphate buffers). In these studies F1, F3 and F5 formulations showed better drug release in compared to others. These formulations showed better drug release than F2, F4 and F6 should be because of polymers used in their formulation and their drug binding and release properties towards the medium used. 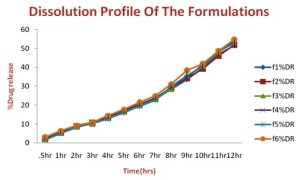 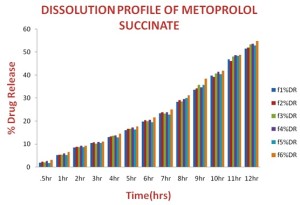 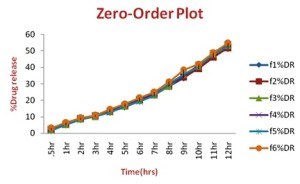 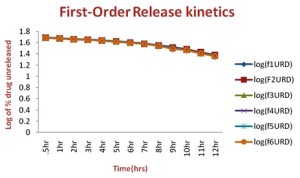 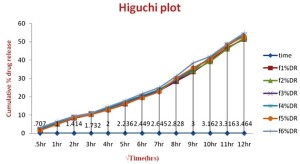 By swelling index it was concluded that the tablet shows matrix type of release in the intestine.  By higuchi plot it was concluded that these formulation follow zero order release kinetics and diffusion type of release. In conclusion HPMC, sodium alginate sustained release matrix tablets can drive and make available the intact drug for local action for hypertension treatment.