ABSTRACT: The present paper deals with a novel approach in formulating and characterizing mucoadhesive buccal patches with the incorporation of herbal extract. In the present arena of Novel Drug Delivery System, delivery of drugs through buccal mucosa serves an easier method for utilization of drugs leading to reduction of dose frequencies and thereby tends to sustain the drug release. Buccal patches were prepared with herbal (Neem) extract with two polymers such as Methyl Cellulose and Hydroxy Propyl Methyl Cellulose in a respective solvent such as Ethanol with Propylene glycol as the plasticizer.  Buccal patches were successfully formulated by solvent casting technique with several concentrations of polymers and those prepared patches were characterized in terms of film thickness, film weight, colour, surface texture, folding endurance, surface pH, swelling behaviour and percentage of moisture loss. Percentage of drug content in all patches was also determined and all patches showed their significant properties upon characterization and there was uniformity in drug content for all patches. In-vitro drug diffusion studies were carried out using a dialysis membrane for four hours which signified satisfactory resuts.

INTRODUCTION: The term ‘Mucoadhesion’ signifies the adhesion between two materials with each other where one of the material is a mucosal surface. The mucoadhesive drug delivery system plays a pivotal role as an innovative drug delivery system of the modern era. In simple words, mucoadhesion can be stated as the attachment of drug along with a suitable carrier that attaches to the mucous membrane. Such formulations have a wide scope of application for both systemic and local effects of drug1.

Drug delivery through oral mucosa also helps in overcoming hepatic metabolism, controlled and sustained rate of drug release2.Two mechanisms underlying the mucoadhesive phenomenon are the intimate contact between a bioadhesive and a membrane (wetting or swelling phenomenon) and the penetration of the bioadhesive into the tissue or the surface of the mucous membrane 3, 4.

Apart from inhalable, injectables, transdermal routes, buccal route of drug delivery are at the most5. Normally, molecular weight, flexibility, hydrogen bonding, concentration, hydration etc are influenced by the polymers employed in the formulation.6 Environmental factors such as saliva also plays a key role. Polymers which can be employed are like hydrophilic polymers such as Polyvinyl Pyrrolidone (PVP), Methyl Cellulose6 etc. Non specific bioadhesive polymers include Polyacrilic acid, Cyanocryllates. Anionic polymers such as CMC, cationic polymers such as Chitosan can be used. Non ionic polymers include PVP, HPMC and Hydrogels. Several plasticizers can be used for formulating buccal films/patch which includes alcohol, Glycerine, Dibutyl phthalate, Propylene glycol, Triethanolamine etc. Utilization of mucoadhesive buccal drug delivery system promotes prolong drug delivery, improved patient compliance and therapeutic efficacy. In terms of safety, flexibility and comfortness, buccal drug delivery can be the ultimate choice.

Neem (Azadirachta indica) is a fast-growing tree that can reach a height of 15–20 metres (49–66 ft). It is evergreen, but in severe drought it sheds most or nearly all of its leaves. The branches are wide and spreading. The neem tree is very similar in appearance to its relative, the Chinaberry (Melia azedarach). The growth of neem tree occurs in different types of soil, but it thrives best on well drained deep and sandy soils. It can tolerate high to very high temperatures and does not tolerate temperature below 4 °C (39 °F). Literature speaks about neem’s antibacterial, sedative, antimicrobial, antiseptic and several properties. It is considered a major component in Ayurvedic and Unani medicine and is particularly prescribed for skin diseases.

Neem oil is also used for healthy hair, to improve liver function, blood purification and balance blood sugar levels. Apart from that it is used as traditional medicine as well as pest and disease control aid7. All such kinds of properties can be enhanced by a novel route of administration such as buccal route by which a minimum dose can be administered which will give a sustained release assuring maximum bioavailability finally leading to good therapeutic activity.

Fresh Neem leaves were collected and they were washed thoroughly with normal water to remove dust particles from the surface of leaves. Then they were again washed with distilled water and they were shed dried. After drying, leaves were grinded until coarse powder is obtained. Then significant amount of the powdered leaves (200gm) were weighed and they were macerated in 1000ml of ethanol for 7 days. Solvent containing the extract was decanted and was concentrated using a rotary evaporator to get the crude extract. The concentrated extract was then dried under room temperature and it was used further for preparing mucoadhesive patches8. The net yield of the crude extract was found to be 2gm.

The technique employed for preparing mucoadhesive buccal patches was solvent casting technique9. They were prepared by dissolving several concentrations of polymers such as 150mg, 300mg and 600mg in 5ml of ethanol and calculated amount of the extract (40mg) was dissolved in another 5ml of ethanol and this mixture was added to the polymer mixture followed by the addition of 0.5ml of sweetening agent. Then 0.5ml of the plasticizer was added to all formulations and were further sonicated to remove all entrapped air bubbles. 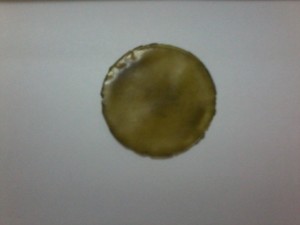 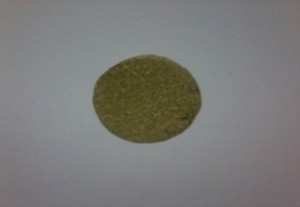 Then they were transferred to a petridish and allowed to dry under room temperature by placing a funnel in an inverted position over the petridish for 24 hours. After that all the patches were studied for further characterizations. Composition of all patches is shown in Table 1. Formulated patches with polymers Hydroxy Propyl Methyl Cellulose and Methyl Cellulose are depicted in the Fig 1.

CHARACTERIZATIONS OF FORMULATED MUCOADHESIVE BUCCAL PATCHES [Table 2(a), 2(b)]

All patches were weighed on a digital weighing balance and their weights were noted. Film thickness was measured using Vernier Callipers from all sides at different position and the average value was noted. Surface texture of all the patches were noted by touching the surface of the films 9,10.

Colour of all the formulated patches was noted visually and they were reported finally.

Patches of 1cm2 each were allowed to swell in 2% agar solution in a clean, dry petridish for two hours consecutively. Surface pH of patches was determined by placing pH paper on the surface of patches12.

Each patches of size (1cmx1cm) was cut and their initial weight was noted. Then they were allowed to swell for 5min in 20ml of distilled water. Patches were than taken out, dried and weighed. Percentage of swelling was noted using the following formula:

All patches of size 1cmx1cm was initially weighed. They were placed in a dessicator containing Calcium chloride and the internal humidity was maintained. After 72 hours, all patches were collected back and reweighed. Average value was noted using the following formula:

The in-vitro drug diffusion study was carried out using open ended cylinder method with the use of a membrane that is semi permeable. The dialysis membrane was activated by immersing it into the water. The membrane of appropriate size was tied to one end of the open ended cylinder which acted as the donor compatment.

Colour of all the patches were uniformly found to be green.

Surface pH of all the patches were found almost neutral i.e 7-8.

Overall swelling index of all the patches were found in the range of 25-130% except F3 and F6, which were found to be negligible.

Percentage of moisture loss were found to be negligible for all the patches. 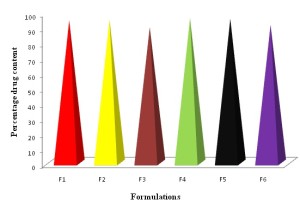 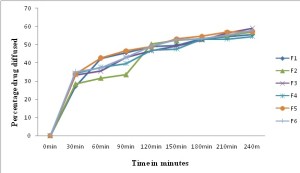 CONCLUSIONS: Herbal extract loaded mucoadhesive buccal patches were succesfully formulated by several concentrations of Methyl Cellulose and Hydroxy Propyl Methyl Cellulose (HPMC) polymers and with Propylene glycol plasticizer and with an organic solvent ethanol and were characterized. From this novel approach, it can be concluded that herbal drugs in the form of extracts can also be employed in formulating mucoadhesive patches in contrast with the usage of allopathic drugs in accordance with their appropriate concentrations and doses.

ACKNOWLEDGEMENT: Authors are thankful to Faculty of Pharmacy and the management of Sri Ramachandra University, Porur, Chennai for their constant support throughout the work.