ABSTRACT: The purpose of current research work has been made to formulate a gastro-retentive drug delivery system (GRDDS) of those drugs having a narrow absorption window or having good absorption at the proximal part of the gastrointestinal tract (GIT) to deliver at stomach site and to improve the bioavailability of a drug. Gastro-retentive hydrogel tablet of Cefixime trihydrate was prepared by the direct compression method via using carbopol 940 and chitosan with different concentrations. Cefixime is a very poorly water-soluble drug after its oral administration so that it is slowly and incompletely absorbed from the gastrointestinal tract, which results within poor bioavailability i.e., 40-50%. Hydrogel was characterized concerning diverse parameters with mechanical strength, swelling ratio, in-vitro drug release, etc. The drug release from a combination of carbopol 940 and chitosan-based hydrogel showed for a prolonged period. A 32 full factorial design was utilized to optimize the tablet of cefixime trihydrate by selecting an amount of carbopol 940 and chitosan as independent variables and effects were observed on drug release and swelling index. Comparison study of antimicrobial activity of optimized batch and the marketed formulation was evaluated against gram-positive (Staphylococcus aureus) and gram-negative bacteria (Escherichia coli) by the zone of inhibition. The optimized batch gave desired results at 16 h as a time for 84.99% drug release and % swelling index, as 93% achieved. Stability studies demonstrated no change in physical appearance and an insignificant difference in drug release and swelling index.

INTRODUCTION: There are many adminis-tration routes for introducing the drug into the systemic circulation. Oral administration is one of that, it is a common and convenient strategy due to the ease of administration, and minimal effort treatment leads to higher levels of patient compliance 1, 2.

Some drugs like Cefditoren pivoxil, Cefixime trihydrate having a narrow therapeutic absorption window in the upper gastrointestinal tract, which methodology is not suitable for it because of the short transit time of selected dosage form in the part of GIT leads to lesser bioavailability.

Gastroretentive dosage form such as oral hydrogel is a recent advancement of novel drug delivery system which is utilized to prolonging the drug release and to improve the absorption 3. The advancement of oral hydrogel was developed with a target to hold the dosage form in the gastric condition 4. These medication conveyance frameworks keep up its consistency all through the stomach and swell with time in the stomach condition for a controlled medication discharge 5. Hydrogels are 3D (three dimensional), cross-connected systems of water solvent polymers (hydrophilic polymers). They have the characteristics to absorb a considerable amount of water and swell without dissolving. It is biocompatible, great transport property, biodegradable. Hydrogels have some novel advantages for the delivery and controlled discharge of bioactive molecules, medications, and cell 6. Cefixime trihydrate is a third-generation Cephalosporin antibiotic 7, 8.  It belongs to a BCS Class 2 category; it has a Low Solubility, High Permeability. It is utilized in the treatment of various diseases such as gonorrhea, bacterial infection UTI, tonsillitis, bronchitis, chronic obstructive pulmonary disease, and pneumonia. A natural polymer involves polysaccharides such as alginate, chitosan, and proteins, such as gelatin and collagen are utilized to form a hydrogel 9, 10.

Cefixime trihydrate is very stable in the existence of beta-lactamase enzymes. Therefore, numerous organisms resistant to penicillins and few cephalosporins because of the nearness of beta-lactamases, might be vulnerable to cefixime 11.

Dose dumping is avoided in the case of a controlled drug delivery system, and the outcome is that most therapeutic administration of a specific drug to a definite person with a specific disease 12. The current research work was mainly targeted to prepare the optimized swellable hydrogel matrix preparations for controlled drug delivery and to examine the drug release rate of cefixime trihydrate.

Preliminary Trial: Preliminary batches (P1-P12) were formulated for the screening of polymer. The hydrogel tablet ingredients were weighed in Table 1 accurately. A combination of carbopol 940 and chitosan showed the drug was released in Table 2 in a controlled manner and more swelling property Table 3.

Finally, the blends were mixed for 5 min, after the addition of magnesium stearate and talc 13. The blends were compressed using a single punch tablet machine. Then the combination of carbopol 940 and chitosan Table 4 further batches (F1-F9) was prepared. The Batch size of each formulation was 200mg.

Preparation of Cefixime Trihydrate Hydrogel Tablet by Utilizing Experimental Design: To optimize the formulation variables, factors selected for the study were a concentration of carbopol 940 and chitosan. The factors were selected based on preliminary studies carried out before the experimental design was being accomplished.

Various batches were prepared as per the 3D surface design, and a total of 9 runs were introduced by the Design Expert® software 14. The response or dependent variables studied were drug release and swelling index. Experimental findings were analyzed using ANOVA by fitting the response Table 5 in the run design Fig. 1(A-D). 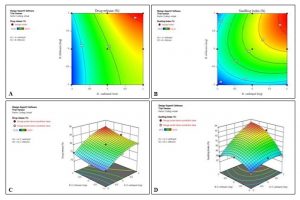 Examination of Drug Excipients Interaction: Analysis of possible incompatibilities between an active pharmaceutical ingredient and distinct excipients forms is a chief part of the pre-formulation phase during the formulation of the stable dosage form FTIR Spectroscopy was utilized to the characterization of drug excipients interaction study. The results were shown in Fig. 2 15. 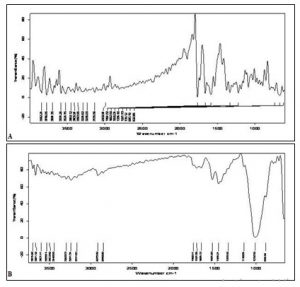 Water Uptake Studies: The swelling index for the formulations Fig. 3 was estimated by placing the weighed tablets in the medium (900ml pH 7.2) at 37 ± 0.5 °C. Frequently the tablets were separate from the medium and were reweighed and calculate the water uptake according to given formula (swelling index) 18.

The dissolution medium was then replaced with pH 7.2 phosphate buffer (900 ml), and the drug release study was carried out for further 16 h. A sample volume of 5ml was withdrawn from each dissolution vessel at regular intervals and replaced with equal volumes of fresh dissolution medium. The sample was filtered and analyzed spectro-photometrically. The cumulative % drug release Fig. 5 of optimized batch vs. time shown in Table 9. The kinetic release study of optimized batch Table 10 was evaluated using following these models: zero-order, first-order, Higuchi, Korsmeyer - Peppas models 19.

Microbial Assay: The Agar diffusion method was appropriating to examine the antimicrobial activity of the cefixime trihydrate hydrogel tablet. Nutrient agar was prepared and autoclaved then poured into sterile Petri plates in aseptic conditions. After cooling 100 µL of a bacterial log broth culture of Escherichia coli, Staphylococcus aureus was spread plated on different nutrient agar plates. The different concentration 10 mg/ml, 20 mg/ml, 30 mg/ml, 40 mg/ml and 50 mg/ml of hydrogel tablet and marketed formulation are prepared. Wells in agar plates were produced by punching, and the tablet was added to the wells.

TABLE 11: ZONE OF INHIBITION OF MICRO-BIOLOGICAL ASSAY OF OPTIMIZED BATCH AND MARKETED PRODUCT 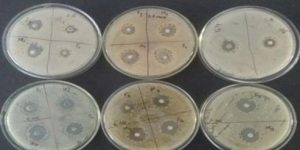 Data Analysis and Validation of the Optimization Model: The responses (% drug release and swelling index) were investigated by a two way ANOVA – based factorial analysis Table 12.1, 12.2. A response surface methodology computation for the current optimization was performed utilizing Design expert trial version 11.

The data were fitted to the second-order polynomial equation, and the acceptability of a fitting response was studied by analysis of variance (ANOVA). The statistical significance was set to p<0.05, and the creating response surfaces, residual plots, contour plots were studied 21.

Stability Study: Stability testing of an optimized formulation hydrogel tablet was performing at 40 ± 2 ºC and 75 ± 5% RH for time interval as per ICH guidelines. The characterization parameters for stability study included drug content, swelling index and % drug release are determined 22.

Screening of Constituents and Preformulation Examination: In the preliminary stage, recognition was given to choose the real concentration of carbopol 940 and chitosan for good swelling characteristics and release rate. Carbopol 940 and chitosan is utilizing as a gelling agent. The combination of carbopol 940 and chitosan formulation shows the results is the drug is released in a controlled manner and good swelling index. The extent of other excipients like magnesium stearate, talc, starch, lactose was selected according to formulations. The pre-compression parameters of batches, for example, Hausner's ratio, bulk density, tapped density, and carrs index results, are established by recommended limits indicated as Indian Pharmacopoeia.

The drug content was assessed, and it is showing the drug has been uniformly loaded in the tablet. The selected levels of both factors were optimized utilizing design expert software. 32 Response surface design enabled the prediction of interaction among independent variables and its effect on the dependent variables. It was utilized to examine how the responses change when two factors are changed at the same time. Consequently, 32 surface designs were utilized to optimize the batches of hydrogel tablets containing cefixime trihydrate. To produce optimized batch, different equations and regression behaviors were examined and fitted into the software. A statistical model polynomial term was utilized to assess the responses.

The data clearly demonstrates that the drug release and swelling index were strongly dependent on the selected independent variables. The optimized batch microbial assay zone of inhibition was counted by using Escherichia coli, Staphylococcus aureus. Therefore, the stability study was performed according to ICH guidelines; there is no significant change in the optimized batch.

Optimization of Independent Variables: Results from preliminary examination recommended that a combination of carbopol 940 (5-20%) and chitosan (1-10%) effects on the % drug release and swelling index. The medication is released in a controlled way.

ANOVA was applied to assess the significance (p< 0.05) of the model and individual response parameters Table 12.1. The model F-Value of 36.74 implies the model was significant. There is just a 0.68% possibility that an F-value this large could happen due to noise. Estimation of probability <0.0500 shows model terms are significant.

For this case A, B is a significant model term. Those model terms are not significant, which are the values greater than 0.1000. The contour plot and 3-D surface response plot in Fig. 1 demonstrated the effect of various independent variables on the % drug release.

After ANOVA estimation the quadratic model F-value of 31.54 implies the model is significant in Table 12.2. There is only a 0.85% chance that an F-value this large could occur due to noise. The value of Probability (P) <0.0500 shows model terms are significant. In this case, A, B, AB, B2 are significant model terms. The 3-D surface response plot and contour plot in Fig. 1 demonstrates the effect of different independent variables on the % swelling index.

Stability Study: The Optimized batch (O) were selected, according to ICH guidelines, the hydrogel tablets were again analyzed for drug content, Swelling index, and in-vitro drug release study. The stability studies of the optimized batch showed insignificant changes in the stability parameters.

CONCLUSION: The purpose of the current research work was to formulate the hydrogel gastro-retentive hydrogel tablet by utilizing 32 surface design and assess various formulations parameters.

FT-IR studies revealed that there was no interaction between cefixime and the polymers used. The drug release from the combination of carbopol 940 and chitosan-based hydrogel showed for a prolonged period of time. The optimized batch gave desired results at 16 h as the time for 85% drug release and % swelling index as 93% accomplished.

Comparison study of antimicrobial activity of optimized batch and the marketed formulation was assessed against gram-positive (Staphylococcus aureus) and gram-negative bacteria (Escherichia coli) by a zone of inhibition. The optimized formulation was found to have better activity in both Escherichia coli and Staphylococcus aureus than the marketed formulation of the drug. Stability studies demonstrated no change in physical appearance, content uniformity, and an insignificant difference in hardness, drug release, and swelling index.