FORMULATION DESIGN AND IN VITRO CHARACTERIZATION OF FELODIPINE NANO-SUSPENSION

FORMULATION DESIGN AND IN VITRO CHARACTERIZATION OF FELODIPINE NANO-SUSPENSION

INTRODUCTION: A pharmaceutical nano suspension is defined as very finely colloid, biphasic, dispersed, solid drug particles in an aqueous vehicle, size below 1µm, without any matrix material, stabilized by surfactants and polymers, prepared by suitable methods for Drug Delivery applications, through various routes of administration like oral, topical, parenteral, ocular and pulmonary routes 1

Depending on the production technique applied changes in crystalline structure of drug particles may also occur. An increasing amount of amorphous drug fraction could induce higher saturation solubility 2.

It was hypothesized that nanosuspensions will enhance drug flux resulting from higher trans-membranous concentration gradients. Nanosuspensions differ from nanoparticles. In nanosuspension technology, the drug is maintained in the required crystalline state with reduced particle size, leading to an increased dissolution rate and therefore improved bioavailability 3.

Felodipine is a member of the dihydropyridine class of calcium channel antagonists. The bioavailability of Felodipine extended-release tablets are influenced by the presence of food. Felodipine also possesses unwanted side effects 4, 5.

Precipitation method has been used to prepare nanosuspension particles of poorly soluble drug. The drug, Felodipine was dissolved in ethanol. Then this solution was mixed with a miscible anti-solvent that is water in presence of surfactants that is hydroxyl propyl methyl cellulose (HPMC K4M) and hydroxyl propyl cellulose (HPC) at concentrations of 0.25, 0.5, 0.75 and 1.0 % of respectively. Rapid addition of a drug solution to the anti-solvent leads to the super saturation of drug in the mixed solution and generation of ultra fine or amorphous drug solids.

Optimized formulations of nanosuspension were prepared by dissolving 2 % w/w of Felodipine in a 10 % w/w stabilizer. Stabilizer, lecithin is used to wet the drug particles thoroughly; prevent Ostwald’s ripening and agglomeration of nanosuspensions, providing steric or ionic barrier. Co-surfactant, bile salt is used to influence phase behavior when micro emulsions are used to formulate nanosuspensions. Ethanol is used as organic solvent. Then, 30 % w/w mixture (surfactant: co-surfactant at ratio of 1:1) was added slowly to the stabilizer, followed by the slow addition of distilled water to adjust the ﬁnal preparation to 100 % w/w. Sorbitol was used as osmogen. Sodium chloride was used as pH adjustment agent. Methyl paraben was used as preservative. All components were mixed and stirred at 3000 rpm.

Droplet size distribution is one of the important physicochemical characteristics of a nanosuspension, was measured by a diffusion method using a light-scattering particle size analyzer Coulter LS-230. It measures the size distribution using the diffusion of laser light by particles.

The average diameters and polydispersity index of Felodipine nanosuspension formulations were measured by photon correlation spectroscopy. The measurements were performed at 25oC using a He-Nelaser 6.

The refractive index, n, of a medium is defined as the ration of the speed, c, of a wave such as light or sound in a reference medium to the phase speed, Vp, of the wave in the medium 7.

The size and shape of nanosuspension were also determined by SEM. The nanosuspensions were spread on a sample holder and dried using vacuum. They were subsequently coated with gold (JFC 1200 fine coater, JEOL, Japan) and examined using scanning electron microscope (JSM 6301F, JEOL, Japan).

In-vitro skin permeation studies were performed using porcine abdominal skin with a Franz diffusion cell having an effective diffusion area of 0.785 cm and 4 ml receiver chamber capacity. Full-thickness porcine skin was excised from the abdominal region and hair was removed with an electric clipper. The subcutaneous tissue was removed surgically, and the dermis side was wiped with isopropyl alcohol to remove adhering fat. The leaned skin was washed with distilled water and stored in the deep freezer at 0°C until further use. The skin was brought to room temperature and mounted between the donor and receiver compartments of the Franz diffusion cell, with the stratum corneum side facing the donor compartment and the dermal side facing the receiver compartment. The thickness of the skin was 50–70 lm as measured with a validated micrometer screw gauge.

The receiver chamber was ﬁlled with phosphate-buffered saline (PBS) solution pH 6.8, stirred with a magnetic rotor at a speed of 50 rpm, and maintained at a temperature of 37 ± 1 °C. A quantity of the nanosuspension diluted with 50 % water was used for the release studies. Since the nanosuspension had 2 % (20 mg/ml) of the drug, the ﬁnal drug concentration in the suspension was 10 mg/ml which was equivalent to the amount in the marketed formulation. One ml of the optimized nanosuspension formulation was placed in the donor compartment and sealed with parafﬁn ﬁlm to provide occlusive conditions. Samples were withdrawn at regular intervals (0.5, 1, 2, 3, 4, 5, 6, 7, 8, 9, 10, 11 and 12 h) and sink conditions were maintained by replacement with fresh medium. Samples were ﬁltered through a 0.45 to l m membrane ﬁlter and analyzed for drug content by a validated UV-Visible spectrophotometric method at 362 nm. Each experiment was conducted in triplicate 9.

To find out the mechanism of drug release from hydrophilic matrices, the dissolution data of tablets of each batch was treated with different kinetic equations, namely zero order kinetic study, first order kinetic study, Higuchi, Hixon-Crowell, Korsemeyer and Peppas 10. 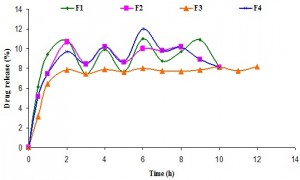 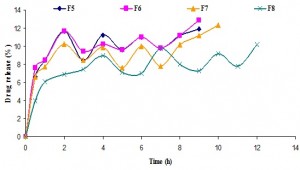 The more controlled and constant manner drug release was observed from felodipine controlled release nanosuspension formulation F3 (Containing HPMC K4M 80 mg and ethyl cellulose 75 mg) as it released it 100 % of drug up to 12 h with minimum fluctuation of drug (Felodipine) concentration in blood stream. From the release kinetics data Table 2, it was confirmed that, the control release formulations F1 to F9 obeyed zero order kinetic model, independent of time and concentration.