INTRODUCTION: Most of the conventional drug delivery systems for treating the colon disorders and diseases are failing as the drugs do not reach the site of action in appropriate concentrations. Thus an effective and safe therapy of these colonic disorders and diseases using site specific drug delivery systems is a challenging task to the pharmaceutical technologists.

The colonic region of the GIT is one area that would benefit from the development and use of such modified release technologies. Although considered by many to be an innocuous organ that has simple functions in the form of water and electrolyte absorption and the formation, storage and expulsion of faecal material, the colon is vulnerable to a number of disorders including ulcerative colitis, crohn’s disease, irritable bowel syndrome and carcinomas 1. Targeted drug delivery to the colon, by means of combination of one or more controlled release mechanisms, hardly releases drug in the upper part of the GIT but rapidly releases in the colon following oral administration. Specifically delivering drug to the colon, a lot of benefits would be acquired in terms of improving safety and reducing toxicity when treating local or systemic chronic diseases 2. As  a  result  new  strategies  of  drug  delivery  have  been  developed  to  overcome obstacles  encountered  by  oral  delivery.  Among these strategies, colon specific delivery has been extensively studied from the last two decades 3. In the present work, Stress has been given to check the microbial hydrolysable nature of polysaccharide drug carriers in colon environment.  It is well established and known concept that the in-vitro drug dissolution studies in colon environment is difficult as fluidity will be minimal and semisolid in nature.  So an attempt was made to study the microbial hydrolysable nature of various polysaccharides in presence of resident bacteria of colon to release the drug present in tablet formulation and evaluated the correlation for in- vitro, in-vivo and microbial degradation studies.

Each core tablet was prepared for further compression coating consisted of ingredients as per Table 1. The materials were weighed, mixed and passed through #60 mesh and ensured complete mixing. The thoroughly mixed materials were then directly compressed into tablets using flat and plain punches on tablet press (korch CKO, korch Germany). Tablet quality control tests such as weight variation, hardness, friability, thickness, drug content uniformity and dissolution in different media were performed on the core tablets 4.

The core tablets were compression coated with different quantities Table 1 of coating material containing of half of Pectin inside the core tablet and (Tc) formulation, Tc tablet formulation was layered or compression coated, firstly layered with ethyl cellulose coat and Secondly layered with cellulose acetate phthalate containing another half of the pectin, by using flat and plain punches of specially designed compression coating tablet press (korch CKO, korch Germany) 5, 6. Tablet was tested for various physicochemical parameters according the pharmacopeial standards.

The dissolution process was carried out in different dissolution medium of pH 1.2 for 2 hours and pH 7.4 for subsequent 4 hours and at pH 6.8 for further 24 hours. 10ml of aliquots of samples were withdrawn at predetermined time intervals and were replacing with fresh dissolution medium to maintain sink conditions.  The samples withdrawn were suitably diluted if necessary and absorbance was measured at wavelengths 318nm on Systronics 119 UV visible spectrophotometer 7.

Agar media was prepared as given in Table 2 as per the microbial standards. The media was transferred to petridish and kept for solidification. 0.5 ml of resident colonic bacterial suspension was aseptically transferred into Petridish. The sample was spread over the surface of the agar medium by rotating the petriplate manually or by placing it on the rotating plate disc.

A ditch was made on the centre of petriplate by using 7mm-diameter sterile cork borer and tinidazole pectin based 7.5% EC: 7.5% CAP compression coated tablet (Formulation code-T1) was place, all the procedure was done under strict anaerobic conditions. After 4 hours dissolution study, the intact tablet sample in the basket was transferred to study the microbial degradation/disintegration in petriplates of agar medium containing resident colonic bacteria, and was incubated for different time intervals. At each interval the petriplate were photographed to observe degradation/disintegration rate 8. Photographs for visual evidence are shown in Fig.6.

The experimental protocol was approved by Institutional Animal Ethical Committee (IAEC) of Luqman College of pharmacy, Gulbarga with CPCSEA Registration No. 346/CPCSEA. After 4 hour of dissolution studies the tablet (T1) formulation were intact and fed to the overnight fasted 16 male Albino wistar rats, 230 – 270 g, into the stomach via polyethylene tubing under light ether anesthesia and again kept fasted with free access of water. Two hundred micro liters of distilled water were administered to rats every 3 h. After each hour two animals were sacrificed and tablet is located in the gut lumen 9. Its appearance is also checked Table 6.

To the core of tablet (T1) formulation with about 1 MBq of 99m Tc- DTPA i.e. 99m Tecnitium-Diethylene Triamine Penta- Acetic acid, (1MBq per 20 mq of resin) ­ 10 was incorporated into (T1) formulation and device is fabricated. This radio labeled tablet was placed into stomach of overnight fasted Wistar rats, 200–270 g, via polyethylene tubing under light ether. For the entire duration of study animal was fasted with free access of water. The tablet was visualized using a gamma camera. The gamma scintigraphic imaging started just after dosing and was carried out for 6 hour at 30 minutes intervals 12. Acquisition was taken for 60 seconds, in supine position. Rats were  sedated  before  immobilization  on  a  mounting  chamber  on   each  time  of acquisition.

The region of interest (ROI) of stomach and cecum were determined by the scintigraphic images taken just after anesthesia 11 dosing and at the end of experiments 13, respectively, because those images showed almost the entire GI segment.

Physico-chemical properties for the tablet formulations:

Evaluation parameters like hardness and friability indicated that the tablets so prepared were mechanically stable and complied with necessary pharmacopoeia specifications.

TABLE 3: PHYSICOCHEMICAL PARAMETERS OF THE TABLETS 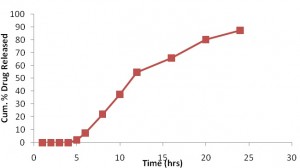 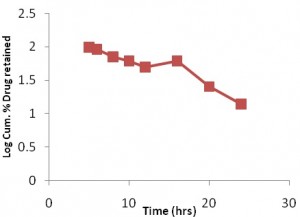 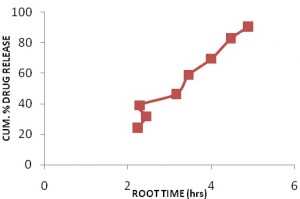 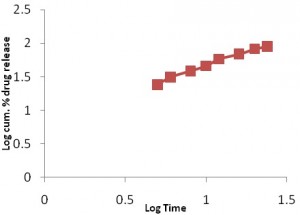 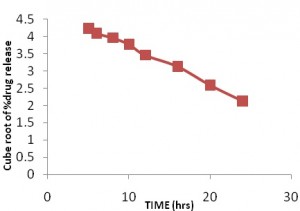 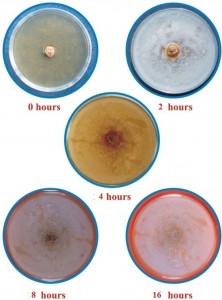 When the Tablet formulation (T1) was given orally to overnight- fasted rats, it was found that it could retain its solid integrity in the stomach as well as intestine. Tablet even found intact in the caecum after fifth hour of administration, indicating that it just arrived. On the sixth hour after administration, tablets were found in disintegrating condition. At seventh hour tablet was totally disappeared depicting as disintegrated completely. Table 6 details the observations.

Gamma scintigraphy using radio labeled tablets (T1) formulation was found to be correlating with those of the in vitro data. Images relating to Gamma Scintigraphic evaluation are shown in Fig.7. Initial images can be hypothesized to be in stomach and later in intestine. Intactness was very clear in those images. As images were taken one in every 30 minutes, the GI transit time can’t be calculated accurately. The reason for taking images less frequently, is to minimize the effect of anesthetics on gastric motility, moreover keeping the animal immobilized by stretching on the mount table in supine position may also alter the normal physiology.

Caecum the region of interest comes close to the right hip joint when animal is in supine position 14.  When the radio labeled tablet arrives in the caecum it stays for some time and in fasted condition retention time further increases. Devised radio labeled (T1) tablet formulation was found to arrive in the colon within 6th hours of post administration. After commencement of disintegration shape of the caecum was arrived to be visible, as radioisotope technetium complexed with DTPA resin, it remained in the confines of lumen. The data so obtained proves the functionality of this novel colon targeted device.The gastric emptying time was less than 1.2 hours. Caecum arrival time was less than 6 hours post-dose. Initial disintegration was found around 6.5 hours and complete disintegration in 7 hours. 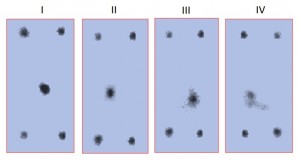 Spots at all four corners are the anatomical markers indicating two  upper ‘shoulder joints’ and two lower ‘hip joints’. (I) tablets in the stomach, (II) in the intestine, (III) in the caecum and (IV) tablet after disintegration in colon.

CONCLUSIONS: The given set of ingredients used in the tablet formulation (T1) proved that the perfect correlations between in-vitro studies: Microbial degradation studies: in-vivo studies:  Gamma scintigraphy studies.  As the in-vitro drug release revealed that the polymer used in the studies holds the drug release for 5 hours and showed perfect enteric coated properties.

In vivo oral administration study showed that on the sixth  hour  after  administration,  tablets  were  found  in  partial disintegrating  and at seventh hour tablet was totally disappeared depicting  as disintegrated completely, indicates that in vivo and in vitro correlations of disintegration.

Scintigraphic evaluation of most promising formulation T1 showed most satisfactory results that indicates strong agreement between the in vitro /in vivo data of disintegration of tablet formulation.

ACKNOWLEDGMENT: Authors take this opportunity to express deep sincere gratitude to the Rector and Deanship Riyadh colleges of dentistry and pharmacy for providing valuable help and support, our sincere thanks KCT college of pharmacy Gulbarga for kind support for the work, Also extend whole hearted gratitude to Board of Radiation and Isotope Technology, Mumbai and Sun Pharmaceutical Industries Ltd for Tinidazole drug gift sample.