INTRODUCTION: Type 2 diabetes mellitus (T2DM) is a major and growing cause of morbidity and mortality worldwide. Despite continued advances in the treatments available for T2DM, glycemic control is frequently suboptimal. Because T2DM is characterized by multiple metabolic abnormalities, current treatment algorithms involving a stepwise approach to the use of combination therapy involving agents with complementary modes of action are frequently necessary.

SGLT2 inhibitors have a unique mechanism of action which does not depend on the presence of insulin or the degree of insulin resistance and are suitable for coadministration with all classes of glucose-lowering agents. Empagliflozin is an SGLT2 inhibitor that, in common with other agents in this class, reduces elevated blood glucose levels by inhibiting SGLT2, the predominant transporter responsible for reabsorption of glucose from the glomerular filtrate, thereby increasing urinary glucose excretion. Combination therapy with these two drugs has the potential to offer improved glucose control compared with that achieved with the individual agents. This approach can reduce the dosing frequency for patients, leading to a simplified dosing regimen, which may assist adherence to therapy 1, 2, 3.

Quality by Design (QbD) is a systematic approach to development that begins with predefined objectives and emphasizes product and process understanding and process control, based on sound science and quality risk management. It helps to assess the critical material attributes (CMAs) and critical process parameters (CPPs) that impacting the predefined critical quality attribute (CQAs). The design space concept is introduced as “the multidimensional combination and interaction of input variables (e.g., materials attributes) and process parameters that have been demonstrated to provide assurance of quality”. Using this approach, it is essential to define the relationship between critical formulation/process parameters and CQAs 4.

Response surface methodology (RSM) is one of the popular methods in the development and optimization of drug delivery systems. Based on the principles of design of experiments (DoE), the methodology involves the use of various types of experimental designs, generation of polynomial mathematical relationships, and mapping of the response over the experimental domain to select the optimum formulation. Central composite design, three level factorial design, Box-Behnken design and D-optimal design are the different types of RSM designs available for statistical optimization of the formulations. Factorial design is one type of RSM design enables, all factors to be varied simultaneously, allowing quantification of the effects caused by independent variables and interactions between them. Factorial design requires fewer experimental runs, less time and thus provides a cost-effective technique than the conventional processes of formulating and optimization of dosage forms. Hence, factorial design was selected as DoE 5.

The present investigation was aimed to fabricate empagliflozin and metformin hydrochloride extended release tablets, where immediate release (IR) empagliflozin part composition was maintained constant and extended release (ER) metformin hydrochloride part formulae was optimized. Lubricated blends of both IR part and ER part were compressed into bi-layer tablets. Preliminary trials were executed with various concentrations of binder (sodium CMC at 3-7% w/w) and various types and concentration of ER polymers (HPMC K100 M CR/polyethylene oxide/ carbopol at12-22% w/w). Optimization of the metformin hydrochloride part was done by employing factorial design as an optimization technique, with target on release of drug 15%-25% at 1 h, 40%-60% at 4 h and NLT 80% at 10 h. The independent variables for this study were concentration of binder (sodium CMC) and release retardant polymers (Hypromellose K100M CR/ polyethylene oxide/carbopol). The dependent variables studied were drug release at 1 h (15%-25%), 4 h (40%-60%) and 10 h (NLT 80%).

Drug-Excipient Compatibility Studies: Both empagliflozin and metformin hydrochloride and selected excipients were subjected for drug excipient compatibility study. The drug and individual excipients were intimately mixed in equal parts by weight and filled in glass vials stoppered with teflon plugs and sealed with aluminium seals. These samples were kept in incubators at 40°C/75% RH for 4 weeks. Initial and 4 weeks (40°C/75% RH) samples were analysed for the solid-state property of the drug in the blended mixtures using differential scanning colorimeter (DSC).

Extra granular materials (ER polymer and Aerosil) and milled granules were co-sifted through ASTM mesh #20 and blended in a low shear double cone blender for 10 min. Then lubricated with magnesium stearate for 5 min in the blender.

Compression: Both empagliflozin part and metformin hydrochloride part were compressed into bi-layer tablets using Eliza Press compression machine at a hardness of 22 to 28 KP.

Experimental Design: In preliminary trials, the formulation variables in each step of the manufacturing process were evaluated for their significance by analysis of variance (ANOVA). Finally, found that the type and concentrations of ER polymer and binder concentration had a significant impact on drug release of ER part. The factorial design was used to evaluate the effect of independent variables (binder concentration and ER polymer concentration) on responses/dependent variables (drug release at 1h [Y1], 4 h [Y2] and 10 h [Y3]) of empagliflozin and metformin hydro-chloride ER tablets. A two-factor, three-level factorial design is used for exploring quadratic response surfaces and constructing second order polynomial models with design expert (stat-ease, version-12). ANOVA (analysis of variance) is inevitably linked to experimental design, which was used to analyse the significance of the model and each selected response. It also generates polynomial equations. The response (Y1) in each trial was estimated by carrying out a multiple factorial regression analysis using the generalized quadratic model:

Where, Y1 is the measured response associated with each factor level combination; b0 is an intercept; b1 and b2 are regression coefficients computed from the observed experimental values of Y1 and X1 and X2 are the coded levels of independent variables.

After fitting the response data in experimental design as in Table 1, the experimental results were analysed by ANOVA. It demonstrated the various statistical parameters such as sum of squares, F values, P values of model terms and correlation coefficient (R2) values. The suitability of model was authenticated by the predicted and adjusted R2 values.

Where, TD and BD are tapped and bulk densities.

Assay-Metformin Hydrochloride Part: Finely grinded powder of 10 tablets was taken and transferred an accurately weighed portion of the powder equivalent to the average tablet weight, to a homogenization vessel and accurately added 500 ml of 10% acetonitrile solution. Homogenized and allowed to soak the sample till fully homogenized. Stock preparation was passed through a 0.45µ filter having, discarded the first 3 ml of filtrate. Transferred 25 ml of the filtrate to a 200 ml volumetric flask and diluted with water to volume 8.

The following chromatographic conditions were employed for analysis

Cu = Nominal concentration of metformin hydro-chloride in the sample solution

In-vitro Drug Release Studies-Metformin Hydrochloride Part: Empagliflozin and metformin hydrochloride ER tablets were evaluated for in vitro drug release studies, which were performed using USP Type-I (Basket) dissolution test apparatus. The volume of the dissolution medium was 900 ml with a stirring speed of 100 rpm and the temperature was maintained at 37 ± 0.5 °C. These conditions were kept constant for all dissolution studies. The study was carried out in pH 6.8 phosphate buffer at 1, 2, 4, 6, 8, 10 and 12 h 9.

10 ml of sample was withdrawn periodically and replaced with equal volume of fresh dissolution medium. The collected samples were filtered through 0.45 µ filter by discarding initial 4 ml of solution. Further diluted 2 ml of filtrate to 100 ml with dissolution medium and analysed to assess the % drug dissolved by employing same chromato-graphic conditions as that of assay.

AT = Peak area of Metformin hydrochloride obtained from the sample solution,

AS = Average peak area of Metformin hydro-chloride obtained from the standard solution,

L = Label claim of Metformin hydrochloride in mg, per tablet.

Calculate the correction factor (CFn) at each time point by using the following formula:

Drug Release Kinetics: The drug release kinetics and mechanism of the formulations were studied by fitting the data obtained from the in-vitro release study into several mathematical equations 10, 11.

Zero Order Model: Drug dissolution from formulations that do not disaggregate and release the drug at a constant rate (slowly) can be represented by zero order equation. To evaluate the release kinetics, in-vitro data were constructed as cumulative percent drug released vs. time. It describes the rate of drug release is independent of the concentration of dissolved substance.

Where, ‘K0’ is zero order rate constant (concentration / time) and ‘t’ is time.

First Order Model: In this model drug release is depending on the concentration.

Where, ‘C0’ is the initial concentration of drug and ‘K’ is first order constant.

Erosion Model: This equation defines the drug release based on erosion alone.

Where, ‘Q’ is fraction of drug released at time t and ‘k3’is release rate constant.

Mt / M∞ -a fraction of drug released at time t,

Higuchi’s Model: The mechanism of the drug release described by following equation.

The values of cumulative percent drug release vs. square root of time.

Drug release data were built-in according to the below cited Equation:

k i- constant and ‘n’ - kinetic constant (used to evaluate the transport mechanism).

Hence, it was concluded that there was no interaction between the drug substances and the chosen excipients. Hence, these excipients were considered for the use in the development of the formulation. 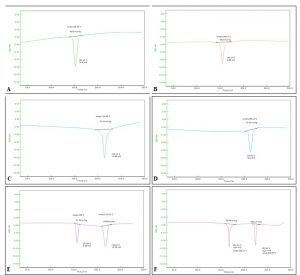 Fitting of Data to the Model: Two factors with three levels factorial experimental design for triplicates require 27 experiments, the independent variables and responses for all experimental runs are given in Table 3. Models of various responses were obtained using design expert (stat-ease). The values of R2, adjusted R2 and predicted R2 were shown in Table 4-6, for each response along with their ANOVA results. Values of probability P<0.05 represent significant model terms. After elimination of non-significant (P > 0.05) coefficients in Table 4-6, following correlations for response variables were obtained in terms of coded factors. The regression equations carry factors along with coefficients (positive/negative) which quantify response values. A positive sign of coefficient indicates synergistic effects, whereas negative sign represents an antagonistic effect. 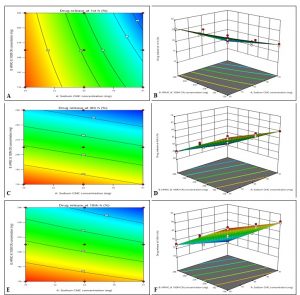 Among the studied range, the concentration of 5% w/w Sodium CMC and 17% w/w HPMC K 100M CR have shown drug release at 1, 4 and 10 h well within the predetermined specifications Fig. 5. Composition of optimized formulation of empagliflozin and metformin hydrochloride extended release tablets is presented in Table 7. The drug release profile of optimized formulation is presented in Fig. 6.

Assay: The assay (ER part) of the all formulations was tested, and results were found in the range of 98.5-101.2%. Assay of the optimized formulation was observed to be 99.6%. 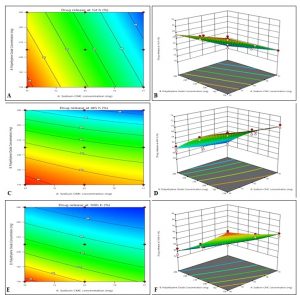 FIG. 3: CONTOUR PLOTS (A, C AND E) AND RESPONSE SURFACE PLOTS (B, D AND F) SHOWING THE IMPACT OF FACTORS (CONCENTRATION OF SODIUM CMC AND POLYETHYLENE OXIDE) ON % DRUG RELEASE AT 1, 4 AND 10 H 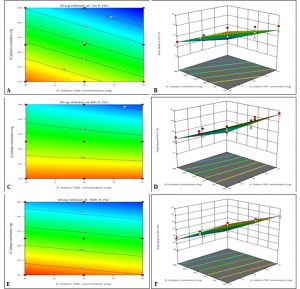 FIG. 4: CONTOUR PLOTS (A, C AND E) AND RESPONSE SURFACE PLOTS (B, D AND F) SHOWING THE IMPACT OF FACTORS (CONCENTRATION OF SODIUM CMC AND CARBOPOL) ON % DRUG RELEASE AT 1, 4 AND 10 H 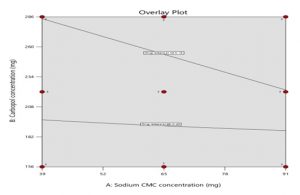 % It is not present in the final product, except in traces.

This investigation revealed that independent variables had a significant impact on the measured responses. The quantitative effect of these factors at different levels on drug release could be predicted by polynomial equations. Linearity observed between the actual and predicted values of the response variables indicated that analytical ability of the selected design. The optimized batch showed 99.6% assay and drug release was well within the predetermined specifications. Micromeritic properties of lubricated blend exhibited excellent flow properties, which are crucial to attain the uniformity of dosage units during compression. The optimized formulation can be used as an alternative to the marketed formulation.

Hence, the applicability of RSM to optimize the formulation variables in the fabrication of empagliflozin and metformin hydrochloride ER tablets is apt enough.

ACKNOWLEDGEMENT: Authors are thankful to Aurobindo Pharma Ltd, Hyderabad, for providing the gift samples of empagliflozin and metformin hydrochloride to carry out the research work.