FORMULATION DEVELOPMENT AND CHARACTERIZATION OF MICROEMULSION OF EXTRACT OF E. NUDA

FORMULATION DEVELOPMENT AND CHARACTERIZATION OF MICROEMULSION OF EXTRACT OF E. NUDA

INTRODUCTION: The anti-cancer drugs that are discovered from herbal medicines have a long history. The compounds derived from plants have served as an important source of very useful clinically used anti-cancer agents like vinblastine, vincristine, camptothecin derivatives, taxol derivatives, etoposide, topotecan, and irinotecan. A number of scientific evidence at molecular mechanisms and the clinical trial showed they have anti-cancer potential.

One such perennial herb having underground tubers, Eulophia nuda, belonging to family Orchidaceae, has been reported to have many medical uses. The tubers are used against tumors, bronchitis, scrofulous glands of the neck, skin rash, rheumatoid arthritis, acidity, piles, stomach ailments, and also they are reported to be used as an aphrodisiac, anthelmintic and demulcent 1-8.

In recent years, traditional medicine has become very popular for the treatment of cancer worldwide, and these approaches are being accepted worldwide as a part of complementary and alternative medicines 9. But there are many disadvantages of the current drug delivery system used in herbal medicines such as bulk dosing, decreased bioavailability and decreased absorption and lack of target specificity 10.

The herbal medicines can be administered with increased efficacy by formulating them into a modern dosage form. This can be achieved by designing novel drug delivery systems for herbal constituents. Novel drug delivery systems have many advantages like decreased frequency of dosing to overcome patient non-compliance, increased therapeutic value, decreased toxicity, and enhanced bioavailability 11. The usage of the colloidal systems like emulsions and microemulsions as drug delivery systems in cancer chemotherapy has been trending in both academic as well as industrial research in recent years 12. The use of colloidal systems like emulsions and microemulsions is a very popular research interest in the fields of academic and industrial cancer research in today’s time. These systems have the ability to affect the drug’s biodistribution and pharmacokinetics. It not only reduces the toxicity of the drug but also increases the drug’s response of the tumor.

Microemulsions offer several potential advantages due to their unique physicochemical properties in cancer therapy 12. Microemulsions are defined as a colloidal, optically isotropic, transparent, or slightly opalescent formulations, consisting of a surfactant, co-surfactant, oil, and water. Microemulsions have several advantages for pharmaceutical use, such as ease of preparation, long-term stability, and high drug solubilization capacity. They are suitable for the incorporation of poorly water-soluble drugs to improve oral absorption 13. Thus, in the present study, the development and characterization of microemulsion loaded with alcoholic extract of E. nuda was done.

Screening of Components for Microemulsion: The saturation solubility study of alcoholic extract of E. nuda was determined in numerous saturated as well as unsaturated oils such as oleic acid, olive oil, sunflower oil, soya oil, and IPM, Capmul MCM, Labrafac®; surfactants like Tween 80, Tween 20 and Labrasol® and co-surfactants including Captex® 100, PEG 400, PEG 200, and PG. For solubility study, an excess amount of alcoholic extract of E.nuda was added individually in 3 ml of oil or surfactant or co-surfactant in 5 ml capacity borosilicate stoppered vials 14. To achieve equilibrium, the resultant mixture was mixed initially by vortex mixture (Remi Cyclo, CM-101 plus, Mumbai India). The vials were then shaken on a magnetic stirrer (Remi Instruments, Mumbai, India) for 72 h followed by centrifugation (Remi Centrifuge, Mumbai, India) at 10,000 rpm for 15 min. The undissolved drug was allowed to settle at the bottom. The supernatant was filtered through a 0.45 µm membrane filter, and the concentration of E. nuda in the filtrate was determined by HPLC after appropriate dilution. The components that revealed the highest solubility of E. nuda extract were used for further studies. The procedure was performed in triplicate manner.

Construction of Pseudo Ternary Phase Diagrams: The phase diagrams of oil, surfactant/co-surfactant (Smix), and water were constructed to obtain a microemulsion region by water titration method 16-18. A homogeneous liquid mixture of oil (Oleic acid), surfactant (Tween 80) and co-surfactant (PEG 400) was titrated with water phase at ambient temperature. The Smix was altered at 1:1, 2:1, 3:1, and 4:1. Each of these ratios was mixed with an increasing amount of oil, i.e., 1:9 to 9:1. The total amount of the microemulsion system was kept 100%. Mixtures are having a different proportion of oil, and Smix were prepared and titrated with water until the endpoint. The homogeneous and transparent microemulsion was considered as the endpoint of aqueous titration method. The resultant data were fed into Chemix 3.0® (Arne Standnes, Bergen, Norway) software for mapping the triangular microemulsion region.

Preparation of Drug Loaded Microemulsion: From the pseudo ternary phase diagrams, Smix ratio with maximum microemulsion region was selected for further studies. Oil and Smix were mixed together in different proportions, as mentioned in Table 1. Alcoholic extract of E.nuda was dissolved in the mixture of oil and Smix under magnetic stirring at ambient temperature. An appropriate amount of water was added dropwise to the above mixture until clear and transparent microemulsion was obtained. The mixture was allowed to stabilize and attain the equilibrium for the next 10-15 min. All extract loaded microemulsion formulations were then stored at ambient temperature till further evaluation.

Ex-vivo Permeation Study: A goat stomach mucosa was carefully excised and prepared for the permeation study. A Franz diffusion cell with an effective diffusion area of 2.54 cm2 was used for the study. The nasal mucosa was placed between donor and receptor compartments of the Franz diffusion cell. The microemulsion was placed on the mounting area carefully, and the release profile was taken. The receptor compartment was filled with 0.1N HCl.

The receptor medium was maintained at 37±1 ºC and was magnetically stirred at 50 rpm. Samples were withdrawn at predetermined time intervals, filtered through 0.45 µm pore size cellulose membrane filter, and were analyzed by HPLC. The fresh buffer solution was immediately replaced into the receptor chamber after each sampling. The cumulative amount of drug in the receptor compartment was plotted as a function of time (min). The cumulative amount of DM permeated through the skin was determined as per the following equation:

In-vitro Cytotoxicity Study on MCF7 Cell Line by MTT Assay: 19, 20 The MCF7 cell line was procured from National Centre for Cell Sciences (NCCS), Pune, Maharashtra, India. The cells were cultured in Minimum essential medium (MEM) (Eagle) with non-essential amino acids, supplemented with 10% Foetal Bovine Serum (FBS), 1% antibiotics solution (penicillin and streptomycin) in a humidified atmosphere of 5% CO2 at 37 ºC. Cells were seeded with a density of 1 × 105/well in a 96-well flat-bottomed plate and incubated for 24 h at 37 °C and in 5% CO2 atmosphere in an incubator. The MCF7 cells were exposed to the alcoholic extract of E. nuda and microemulsion loaded with alcoholic extract of E. nuda at four different concentrations of 100, 250, 500, and 1000 μg/ml for 48 h. Cells were then treated with MTT reagent (0.5 mg/ml as a final concentration in phosphate buffer saline) for 4 h at 37 °C in the dark. Then all the media and MTT reagent was removed from the wells, and 200μl DMSO solvent was added to each well to dissolve the formazan crystals. The optical density (OD) was recorded at 570 nm using a Microplate (ELISA) reader. The percentage cytotoxicity for MCF7 was calculated.

Stability Study: The microemulsions were subjected to accelerated stability studies as per ICH guidelines (40±2 °C and 75±5% RH) for a period of 3 months in stability chambers (Model-TH 90 S, Thermolab, India). The samples were taken out at 30, 60, and 90 days and were evaluated for drug content, % transmittance, globule size, and zeta potential to ensure physicochemical stability.

Selection of Components for Microemulsions: The solubility of alcoholic extract of E.nuda was determined in different oils and was found highest in oleic acid (131.21±2.42 mg/ml, Fig. 1). Also, oleic acid is a lipophilic permeation enhancer and can be useful to improve the membrane permeability 21. Hence, oleic acid was selected as an oil phase for the microemulsion formulation. The type of microemulsion formed depends on the properties of the oil, surfactant, and co-surfactant. An important criterion for the selection of the surfactant is that the required hydrophilic-lipophilic balance (RHLB) value to form oil in water microemulsion be greater than 10. Both Labrasol® and Tween 80 are non-ionic, GRAS listed excipients, and widely used in pharmaceutical preparations. Alcoholic extract of E. nuda showed higher solubility in Tween 80 (14.70±1.22 mg/ml) among the screened surfactants. PEG 400 showed the highest solubility of DM (18.23±3.12 mg/ml) among the tested co-surfactants; hence it was chosen for further studies. 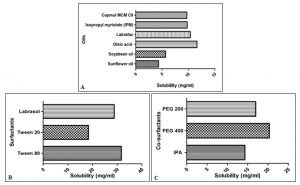 FIG. 1: SOLUBILITY STUDY OF ALCOHOLIC EXTRACT OF E.NUDA IN (A) OIL, (B) SURFACTANT AND (C) CO-SURFACTANT 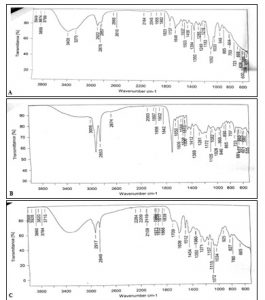 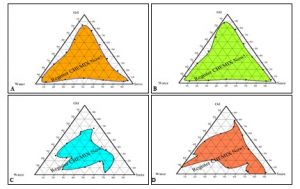 Optimization of Microemulsion: The results of the evaluation parameters of microemulsion are depicted in Table 1. Upon analyzing the results, it is clear that drug loading is maximum in F2 batch due to a higher concentration of Smix. Further, it shows no significant difference in the case of other parameters like % transmittance, refractive index, conductivity, viscosity, pH, and drug loading.

Globule size was found to be minimum in all formulations where the amount of Smix was high, drug permeation was found to be similar in each batch, and no significant difference was observed. Based on all the results, the F2 batch was considered as the optimized formulation and was evaluated for in vitro cytotoxicity study.

TABLE 1: FORMULATION COMPONENTS OF MICROEMULSION OF ALCOHOLIC EXTRACT OF E. NUDA WITH RESULTS

Ex-vivo Permeation Study: Ex-vivo permeation study of microemulsion revealed depicted successful permeation profile through goat stomach mucosa, and the results are presented in Fig. 4. Prepared microemulsion could act as a drug reservoir from which the drug will be released from the internal phase to the external phase and finally onto mucosa. Microemulsion showed better permeation (73.65%) than the alcoholic extract of E. nuda (67.23%). This can be attributed to components of microemulsion (oil and Smix), which helps in higher permeation. 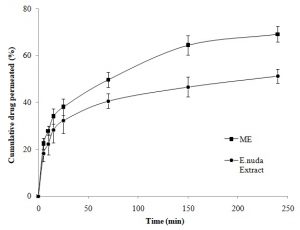 In-vitro Cytotoxicity Study on MCF 7 Cell Line by MTT Assay: The result of the in-vitro cytotoxicity study is depicted in Fig. 5. The results clearly indicated higher cytotoxicity in the case of micro-emulsion compared to the alcoholic extract of E. nuda. This higher cytotoxicity may be attributed to microemulsion as it helps in better permeation, due to its smaller globule size it may permeate to the cells between the cell walls. 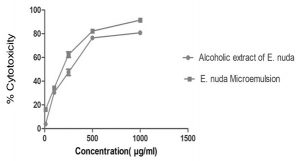 Stability Studies: In stability studies, the microemulsion exhibited no precipitation of drug, creaming, phase separation, and flocculation on visual observation. The results of stability studies showed that there are negligible changes (P>0.05) in the parameters such as drug assay, % transmittance, globule size, PDI, and zeta potential of microemulsion after 3 months of storage.

ACKNOWLEDGEMENT: The authors are thankful to DST- INSPIRE, New Delhi, India, for providing financial assistance for the project.