ABSTRACT: The current study work is focused on Dapoxetine hydrochloride buccal films. In recent days, buccal drug delivery has aimed at importance in many aspects compared to conventional tablets. The addition of mucoadhesive polymers to the formulation enhances the therapeutic levels of drug. Dapoxetine hydrochloride, a choice of drug used in the therapy of premature ejaculation in men. Dapoxetine hydrochloride is a selective serotonin reuptake inhibitor (SSRI’s) whose oral bioavailability is 42% due to hepatic first-pass metabolism. To enhance the bio-availability and drug release, Dapoxetine hydrochloride is designed as buccal films. They are prepared by the most commonly used solvent-casting method. Two grades of Hypromellose (E15 and 5cps), polyvinyl alcohol, and polyvinyl pyrrolidine are polymers that are mucoadhesive in nature. Propylene glycol is used as a plasticizer, and also mucoadhesive polymer and methanol as a solvent are used in film preparation. FTIR studies were done, and there is no incompatibility between active pharmaceutical ingredient (API) and excipients. The formulations developed were evaluated for different parameters such as weight uniformity, thickness, folding endurance, surface pH, swelling index, mechanical strength, % moisture absorption, in-vitro drug release, ex-vivo permeation studies, and stability studies. Buccal films of Dapoxetine hydrochloride were formulated as F1 to F8, which consists of different polymers and their combinations. Of all the prepared formulations, F5 (HPMC E15+ HPMC 5cps) shows uniformity of weight (15.79 ± 0.11 mg), thickness (0.98 ± 0.33 mm), folding endurance (302 ± 3.6), surface pH (6.81 ± 0.21), swelling index (33.49 ± 0.80 %), tensile strength (6.974 ± 0.16 kg/mm2), maximum % drug release (89.08 ± 0.06 %) and permeation (91.11 ± 0.85 %). HPMC films are preferred compared to other combinations because they are more elastic, more bioadhesive in the oral cavity. The stability studies were done and described saying there is no prominent changes observed in the optimized F5 formulation.

INTRODUCTION: Oral route has been the commonly adopted and most convenient route for drug delivery. Oral route drug administration has attention in the pharmaceutical field due to a more flexible design of dosage form than drug delivery design for other paths.

The conventional systems supply drugs to the blood through the hepatic system, and therefore, the amount in the bloodstream may be much lower than the amount formulated into the tablet. To overcome this limitation, buccal drug delivery is developed. Drug delivery through buccal mucosa of the oral cavity is called BDDS.

Buccal mucosa lines the inner region of cheeks. In the biological term, the product is placed between upper gingiva (gums) and cheek to treat local and systemic conditions. The drug gains direct entry into the systemic circulation after buccal administration, thus bypassing the first-pass effect.

Dapoxetine hydrochloride is a selective inhibitor of serotonin reuptake. It inhibits serotonin neuronal reuptake and the subsequent potentiation of the neurotransmitters at pre and postsynaptic receptors.

It is used as an anti-depressant drug. But recent studies have developed this drug in the therapy of premature ejaculation in men. Human ejaculation is mediated by (SNS) sympathetic nervous system.

Postganglionic sympathetic fibers that stimulate the seminal vesicles, vas deferens, prostate, bulbourethral muscles, and bladder neck cause them to contract in a coordinated fashion to achieve ejaculation. Dapoxetine hydrochloride has poor bioavailability (42%), which is very short.

To enhance the bioavailability of Dapoxetine hydrochloride and also prevent hepatic first-pass metabolism by designing it as buccal films.

In the present study, an attempt was made to formulate a mucoadhesive buccal film of Dapoxetine hydrochloride using HPMC E 15, HPMC 5cps, PVP, and PVA by solvent casting technique.

They were discovered for the presence of characteristic peaks within the compound. FTIR study was conducted to check the compatibility of drug and excipients. FTIR was conducted in the BRUKER ALPHA-T IR instrument with the data acquisition system OPUS.

Formulation of Buccal Films: Dapoxetine hydrochloride buccal films were designed using solvent casting method. At first, polymer was dissolved under constant stirring by 10 ml distilled water until a clear solution has been obtained.

The resulting solution was then poured in the petri-dish (9.5 cm) and kept in a hot air oven and dried for 18 h at 50 ºC. The dried buccal patch was cut into 1 cm diameter and stored in desiccator for further analysis.

Calculation of Dose for Each Formulated Buccal Patch: Dose of drug to be incorporated in each 1cm2 film = 10 mg of Dapoxetinehydrochloride (DH)

Uniformity of Weight of Films: Three films from each prepared patch were weighed with the help of electrical balance, and individual weight was noted. The average weight was measured, and the uniformity of weight was calculated.

Thickness: Vernier calipers were used to measure the thickness of the 3 films, and the average value was noted.

Folding Endurance: This test was conducted by 3 films randomly selected from each batch, and each film folded up to 300 times manually at the same place or until it broke, and the average value was noted.

Surface pH: It was evaluated by taking small beakers containing 1 ml distilled water (pH 6.8), and films were left to swell for 1 h.

After 1 h, the pH was noted by placing the electrode surface in contact with the film. The average of three measures was recorded.

Percentage (%) Moisture Absorption: The weight of three 1 cm films was precisely weighed and then kept in desiccators, which consists of saturated aluminum chloride solution at extreme humid conditions. After three days, the films were reweighed. The mean PMA values were measured and noted.

Swelling Index (%S): It is carried out by 5% w/w agar hot solution was poured to petri plates and kept to solidify. Then 3 films from each batch were weighed and left over the surface of the agar and kept in an incubator at 37 °C for 3 h and reweighed the hydrated films. The % of moisture absorbed was measured using the formula:

In-vitro Mucoadhesion: The mucoadhesive strength of films was measured in triplicate on a modified physical balance. A piece of goat buccal mucosa was attached to the mouth of a glass vial full of PBS pH 6.8. In the center of beaker with PBS, a glass vial was tightly fitted. Patches were attached to the lower side of rubber stoppers with glue and the mass (g) needed to detach the patches from surface of mucosa was taken as the muco-adhesive strength (shear stress). The parameters were calculated from the mucoadhesive strength:

Drug Content Uniformity: It was determined by taking 3 films from each patch randomly and weighed separately. Each film was dissolved in 100 ml of phosphate buffer 6.8 pH and kept for soni-cation for 15 min. 1 ml of solution is taken from 100 ml of phosphate buffer 6.8 pH and diluted with buffer until 10 ml mark. Later it was analyzed at 204 nm wavelength, and average drug content was calculated and noted.

In-vitro Drug Release Studies: The USP type II dissolution testing equipment was used for the in-vitro drug release of buccal films. The dissolution media were phosphate buffer (6.8), 900 ml, 37 ± 0.5 °C and 50 rpm was used. With the help of waterproof adhesive tape, the film was fixed to the paddle. Samples (5 ml) were collected at regular intervals of 5, 10, 15, 30, 45, 60 min, and the same amount of fresh medium is replaced as dissolution media to maintain equilibrium (sink) condition. The concentrations of drug were measured spectro-photometrically at 204 nm wavelength, and values were recorded.

Film is placed on the buccal mucosa, and donor compartment is placed above it. The entire assembly was set on a magnetic stirrer, temperature is set to 37 °C with 100 rpm. 1 ml samples are collected and replaced with same volume to maintain equilibrium (sink) conditions. Samples were detected in UV spectrophotometer at 204 nm and analyzed for % cumulative drug release.

Accelerated Stability Studies: Stability studies for buccal films were carried out according to ICH guidelines at different temperatures. The samples were maintained at 40 ± 2 °C / 75 ± 5% RH. The formulations were kept in a desiccator containing saturated calcium chloride at 75% RH and the desiccator was placed in an oven maintained at 40 °C.

Kinetic Analysis: The data obtained were fitted in: zero-order, first-order, Higuchi, and Peppas model to analyze the mechanism for the release and release rate kinetics of dosage form. The best fit model was selected in this by comparing the obtained r2 values.

From this data, the standard curve was obtained by plotting concentration on X-axis against absorbance on Y-axis. 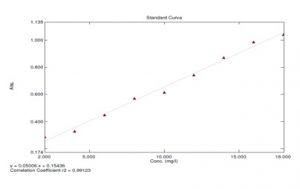 Compatibility Studies of Drug and Excipients With FT-IR Spectroscopy: The compatibility studies of API (drug) and excipients were evaluated using an IR spectrophotometer. 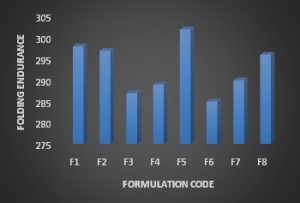 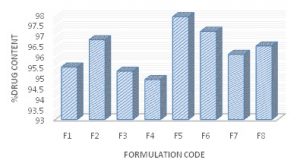 The data of release rate kinetics for formulation F5 was shown in Table 12.

Stability Study: Stability studies of the prepared Dapoxetine hydrochloride buccal patches were carried out, by storing formulation F5 at, room temperature and humidity and 40 ± 2 °C / 75% RH ± 5% RH in humidity control oven for thirty days. The results of the stability studies, which were conducted for 30 days, are shown in Table 13. The result obtained showed a slight decrease in, in-vitro drug release and ex-vivo permeation release of formulation F5 as compared to the fresh formulation F5. There is no significant change in folding endurance, swelling index, uniformity of drug content.

CONCLUSION: In the current study work, an effort has been produced to design and formulate Dapoxetine hydrochloride mucoadhesive buccal films to enhance bioavailability and also to avoid the first-pass effect in the liver. Dapoxetine hydrochloride buccal films were prepared by using the most common solvent-casting technique by employing different polymers like hydroxypropyl methylcellulose (E15 and 5 cps), PVP and PVA by changing the quantities of polymers in ratios and combinations to determine the impact of polymers on the various evaluation characters.

Among all the formulations (F1 to F8), F5 formulation (HPMC E15 + HPMC 5cps) in equal ratios gives maximum % drug release, which was suitable in the preparation of buccal films and optimized F5 formulation follows zero-order kinetics with anomalous / non-fickian diffusion.