ABSTRACT: Clopidogrel bisulphate is a drug used in inhibiting the platelet aggregation and also used in the treatment of cardiovascular disorders. It acts by inhibiting the adenosine diphosphate and is almost absorbed (98%) after oral administration. Approximately 50 % of drug is excreted in urine and 40% in feces. The plasma half life of drug is about 8 hours which makes frequent dosing necessary to maintain the therapeutic blood levels of drug for a long term treatment. So the transdermal patches were used to deliver the drug directly to systemic circulation through skin. The transdermal patches were prepared by solvent evaporation method. The influence of varying the combination of polymer concentrations at different ratio was evaluated. The polymers used in this study did not alter physicochemical properties of the drug. All the batches were evaluated for physical appearance, thickness, weight variation and drug content uniformity. The in-vitro drug dissolution study was carried out using Franz diffusion apparatus and the release mechanisms were explored. Mean dissolution time is used to characterize drug release rate from transdermal patch and indicates the drug release retarding efficiency of polymer. The time taken for 92 % of drug release was found to be within 16 hours with F4 formulation while all other formulations were showing 85% drug release for 10 hrs and hence the concentration of PVP and ethyl cellulose 200 mg was best. Hence the optimized formulation was found F4. All the prepared patches exhibited zero order release kinetics, governed by a diffusion mechanism.

INTRODUCTION: Transdermal Drug Delivery System (TDDS) are adhesives drug contains devices of defined surface area that delivers predetermined amount of drug to the intact skin at a preprogrammed rate, the TDDS has gained importance in recent years 1. Skin is the largest organ of the body and it protects the body from the environmental factors. In order to achieve therapeutic values of a drug product delivered through skin, it is required to overcome the skin barriers 2.

Transdermal drug delivery system are defined as self-contained discrete dosage forms which are also known as “patches” ‎when patches are applied to the intact skin, deliver the drug through the skin at a controlled rate to the systemic circulation 3. TDDS offers many advantages over conventional injection and oral methods. It reduces the load that the oral route commonly places on the digestive tract and liver.

It enhances patient compliance and minimizes harmful side effects of a drug caused from temporary overdose. Another advantage is convenience, especially notable in patches that require only once weekly application. Such a simple dosing regimen can aid in patient adherence to drug therapy 4. Some chronic diseases like diabetes, hypertension, tuberculosis, cancer require prolong administration of drugs and frequent dosing to maintain constant drug plasma concentration level and may lead to poor patient compliance. Many orally administered drugs can irritate the GI tract or undergo first pass metabolism and leads to poor bioavailability 5.

Therefore, clopidogrel bisulphate is an ideal drug for the transdermal drug delivery. Development of clopidogrel bisulphate patches using PVP, ethyl cellulose, HPMC, PEG-400 as plasticizer and DMSO as a permeation enhancer by using solvents at equal ratios. Evaluation of prepared patches by in-vitro drug release studies by Franz diffusion apparatus and to study the release kinetics of drugs from all the formulations.

Preparation of Clopidogrel bisulphate Trans-dermal patches: Clopidogrel bisulphate trans-dermal patches were prepared by solvent evaporation method. Weighed quantities of polymers like hydroxy propyl methyl cellulose, Poly vinyl pyrrolidone, and ethyl cellulose were dissolved in chloroform and ethanol solvent mixture. The drug was added to the above polymer solution along with polyethylene glycol as plasticizer and dimethyl sulfoxide as permeation enhancer and thoroughly mixed to form a homogeneous mixture. The volume was made up to 10 ml with chloroform. Then the drug solution was added to the polymeric solution, casted on to petriplates of surface area about 69.42 sq.cm, allowed for air drying overnight followed by vacuum drying for 8-10 hr. The entire sheet was cut into small patches with an area of 5cm 2 i.e. with a diameter of 2.5 cm. About 10 patches were obtained from each sheet 7.

Physical Appearance: All the prepared trans-dermal patches were visually inspected for color, clarity, flexibility and smoothness 8.

Thickness of the Patch:  Thickness of each trans-dermal patch was determined via utilizing a micrometer screw gauge placed at six distinct positions. The average thickness and standard deviation values of six readings were calculated for each batch of drug loaded patch 9.

Weight Uniformity: It was studied by individually weighing 10 randomly selected transdermal patches and average weight was calculated on digital balance (Shimadzu, AUX220, Japan). The individual weights should not deviate significantly from the average weight 10.

Drug Content: An accurately weighed portion of film (about 100 mg) is dissolved in 100 ml of suitable solvent in which drug is soluble and then the solution is shaken continuously for 24 h in shaker incubator (Rajendra Electrical Industries Ltd, Hyderabad). Then the whole solution is sonicated, filtered, drug in solution is estimated by appropriate dilution and analysed   by (Shimadzu, Japan) UV –Spectrophotometrically 11.

Percentage of Moisture Uptake: The weighed films were kept in a desiccators (Borosil Hyderabad, India) at room temperature for 24 hours and then exposed to 84 % relative humidity using a saturated solution of potassium chloride. Finally the films were weighed and the percentage of moisture uptake is calculated as the difference between the final and initial weight with respect to initial weight 12.

In-vitro Release Studies:  In-vitro drug release of trans-dermal patches can be studied using Franz diffusion cell (most commonly used) with an effective permeation area of 1.0 cm2 and receptor cell volume of 10 ml. The temperature is maintained at 32°C ± 0°C. The synthetic cellophane membrane was mounted between upper donor and patch placed on upper receptor compartment of the diffusion cell. The lower receptor compartment is filled with 10 ml phosphate buffer pH 7.4 which is constantly stirred on a magnetic stirrer (Remi Hyderabad, India) at 100 rpm. 2 ml samples were withdrawn  from receptor compartment through the sampling port  at predetermined time interval and are analysed for drug release at 247 nm spectrophotometrically 14 (Shimadzu, AUX220, Japan).

RESULTS: In the present work, transdermal patches were prepared by using solvent evaporation method as it was feasible and simple. The best parameters obtained for clopidogrel bisulphate patches were evaluated based on drug release.

Evaluation Data of Clopidogrel bisulphate Transdermal Patches: The following studies were carried to find the effect of different ratios of polymers in combination.

S.D* is being calculated by taking 3 patches 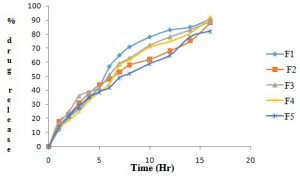 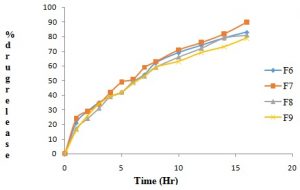 DISCUSSION: Physical Appearance of the polymers (Ethyl cellulose, Hydroxypropyl methyl cellulose, Poly vinyl pyrrolidone) used for the fabrication of transdermal systems showed good film forming properties. These prepared systems were thin, flexible, smooth and translucent and the method adopted for the systems was found satisfactory. Thickness of the transdermal patches in all 9 formulations was in the range of 206 - 278 mm with low standard deviations.

The % of content uniformity in patches was determined by UV spectrophotometer ((UV 2060 Plus Analytical Technology, India). All the formulations are subjected for content uniformity and were in the range of 96.99 - 97.99 %.  It was observed that all the formulations were as per I. P. specification limits the low values in standard deviation indicate uniform drug content in all the formulations. The average weight of the patches was in the range of 135 - 165 mg.  The weights of all transdermal patches were found to be uniform with their low standard deviation. The folding endurance average values was found to be 22 -30. The % moisture uptake was found to be 0.25-0.93%. Optimization of the formulated patches was done by performing in-vitro drug release studies using Franz diffusion cell with cellophane membrane. The % drug release data and plot which were obtained for the transdermal patches in phosphate buffer pH 7.4 was shown in Table 3, 4 and Fig. 1, 2 respectively were analyzed at 247 nm by UV - Spectrophotometer.

On evaluation of various parameters it was found that the polymers produced satisfactory results. Transdermal patches with PVP and HPMC combinations showed 91 % drug release while PVP and EC showed 92 % drug release. Finally combinations like HPMC and EC showed 90 % drug release. The release rate increased with decrease in polymeric concentration. So the combinations of polymers like PVP and EC with low concentration were mostly suitable to prepare transdermal patches. The release kinetics of the formulation followed zero order release kinetics with higuchi release mechanism.

ACKNOWLEDGEMENT: The authors express their sincere thanks to management Dr. G. Srinivas Reddy, Karimnagar, India, for providing required facilities to carry out this research work.