ABSTRACT: The work was aimed to develop an immediate release tablet formulation of Fenofibrate and Rosuvastatin in combination for better treatment as well as management of hypercholesterolemia and prevention of cardiovascular diseases. The target was also set to improve the dissolution profile of poorly soluble Fenofibrate. For manufacturing these immediate release combined formulation tablets, Hot-Melt Technology was used which helped in enhancing dissolution profile and moreover, here amino acids are used in conjunction with other excipients. In the developed formulation, the amino acids imparted its action as excipient by helping in the solubilization process which facilitated the release rate of Fenofibrate. The formulated tables were then investigated for hardness test, friability test, weight uniformity and dissolution test. The results showed that all tablets met the expected requirements for these tests and the release rate of fenofibrate also got improved giving an excellent dissolution profile for both fenofibrate and rosuvastatin

It appears to decrease the risk of cardiovascular disease and possibly diabetic retinopathy in diabetes mellitus patients.5 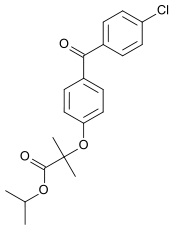 It is white crystalline powder stable under normal condition having molecular weight 360.83 and melting point 80-850C.6

Rosuvastatin belongs to a group of drugs called HMG CoA reductase inhibitors.  Rosuvastatin reduces triglycerides and low-density lipoprotein in blood by inhibiting HMG-CoA reductase while increasing the levels of "good" cholesterol or high-density lipoprotein (HDL). It is used along with exercises, supportive diet and weight-loss supplements to treat high cholesterol and related conditions, and to prevent cardiovascular disease. 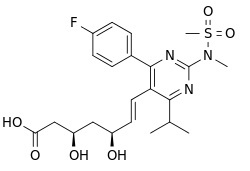 Fenofibrate has the disadvantage of being poorly soluble in an aqueous medium which led to its having an insufficient dissolution profile. This in turn gives poor bioavailability following oral administration. Fenofibrate in combination with amino acids overcome this poor solubility and increases dissolution profile.

A mixture of Fenofibrate, Rosuvastatin Calcium and polyethylene glycol 1500 (PEG) were physically mixed and then heated at 125°c until the mixture was completely melted to clear liquid. Table 1 showed all the ingredients and amounts of actives and excipients used in formulation.

The hot melt liquid was stirred gently for 1 minute and then removed from the heated water bath. The mixture was allowed to cool at room temperature.  Within few minutes, the mixture was Solidified. After that it was pulverized and sieved through a #14 mesh sieve (US standard mesh).

TABLE 1: THE INGREDIENTS AND AMOUNTS OF ACTIVE AND EXCIPIENTS USED IN FORMULATION

Sieved powders were then mixed with other excipients and blended. Using Dry granulation method the blends were compressed into tablets.

The testing involved subjecting the tablets to an increasing load until the tablets break or fracture. The force was applied along the radial axis of the tablets.

Percentages of Friability of the tablets were found out by the following formula:

W1 = weight of tablets before testing

W2 = weight of tablets after testing

Weight of tablets after testing:

For most products, the maximum weight loss of not more than 1% is acceptable,8 so all of our tablets met the requirement as we found the average percentage of friability 0.08032.

According to British Pharmacopoeia, not more than two of the individual weights deviate from the average weight by more than ± 7.5%.8 So, all tablets met the B.P. requirement.

Preparation of sample solution: At first, the water bath was checked. 900 ml of 0.375% sodium lauryl sulphate solution was taken in each of the six vessels of the apparatus. The thermostat was adjusted at 37± 0.5°C. After attaining the temperature, the rotation is set to 100 rpm. One tablet was placed in each of the six vessels. The Apparatus was then operated for 45 minutes. After 45 minutes, 20ml of samples from each of the vessels were withdrawn. The solution was then filtered and the filtrate was collected.

We calculated the % dissolution of Fenofibrate at 235nm by using the following equation:

We calculated the % dissolution of Rosuvastatin at 286 nm by using the following equation:

CONCLUSION: The formulation for combination tablet of Fenofibrate and Rosuvastatin was developed. Here, isoleucine and arginine worked as solubility enhancers, significantly increasing the release rate of Fenofibrate. All results implied that using hot-melt technology and amino acids as excipients significantly improved the dissolution profile.