ABSTRACT:  The main objective of present investigation is to formulate the sustained release tablet of lamotrigine using 32 factorial design. Lamotrigine, a weakly basic and anticonvulsant drug belongs to BCS Class II, having high permeability and poor solubility.  The sustained release tablets of lamotrigine were prepared employing different concentrations of HPMC K4M and HPMC K100M in different combinations as a rate retarding polymer by wet granulation technique using 32 factorial design. The quantity of polymers, HPMC K4M and HPMC K100M required to achieve the desired drug release was selected as independent variables, X1 and X2 respectively whereas, time required for 10% of drug dissolution (t10%) and 50% (t50%) were selected as dependent variables. Totally nine formulations were designed and are evaluated for hardness, friability, diameter, thickness, % drug content, In-vitro drug release. From the Results it was concluded that all the formulation were found to be within the Pharmacopoeial limits and  the In-vitro dissolution profiles of all formulations were fitted in to different Kinetic models, the statistical parameters like intercept (a), slope (b) & regression coefficient (r)  were calculated. Polynomial equations were developed for t50%, t10%, k1.  According to SUPAC guidelines the formulation (F5) containing combination of 12.5% HPMC K4M and 12.5% HPMC K100M, is the most similar formulation (similarity factor f2=85.01 & No significant difference, t=-0.0102) to marketed product (Lamictal). The selected formulation (F5) follows Higuchi’s kinetics, and the mechanism of drug release was found to be Anomalous type (Non-Fickian, n=0.841).

INTRODUCTION: Drug delivery in conventional dosage forms often suffers from the drawbacks of repeated drug administration and large fluctuations in drug blood levels. The frequency with which a rapidly absorbed and distributed drug must be given in a conventional dosage form is dependent upon intrinsic properties of the drug, viz. elimination half-life (t1/2) 1.

Sustained release dosage forms are designed to complement the pharmaceutical activity of the medicament in order to achieve better selectivity and longer duration of action including improved therapeutic effect, increased patient compliance by reducing dosing frequency and decrease in incidence and /or intensity of adverse effect by a constant blood concentration 2. Sustained release matrix tablet is relatively easy to fabricate by incorporating drug molecules into a matrix in slowly disintegrating or inert porous material containing a hydrophilic rate controlling polymer 3, 4, 5.

About 95% of all new potential therapeutic drugs (APIs) exhibit low and variable oral bioavailability due to their poor aqueous solubility at physiological pH and consequent low dissolution rate. These drugs are classified as class II drugs under BCS with low solubility and high permeability characters and pose challenging problems in their pharmaceutical product development process.

Lamotrigine is an anti epileptic drug and it is approved in the united states for the treatment of partial seizures and bipolar disease, belongs to class-II under BCS Classification and exhibit oral Bioavailability of about 98% 7, 8. It is available as immediate release and sustained release formulations in the market with different strengths such as 25 mg, 50 mg and 100 mg. In 2009 GSK received FDA approval for extended release version of Lamotrigine (Lamictal-XR) 9, 10. In the present work, lamotrigine was seleted as a model drug and is formulated into sustained release (SR) tablet with an aim to enhance patient compliance.

Chemically lamotrigine is 6-(2, 3-dichlorophenyl)-1,2,4- triazine-3,5-diamine. Lamotrigine inhibits sodium currents by selectively binding to the inactivated state of the sodium channel and subsequently suppresses the release of the excilatory amino acid, glutamate11. Hence, the objective of this research work was to prepare sustained release tablet of lamotrigine using hydroxypropyl methylcellulose (HPMC) of different grades  K4M and K100M (their concentrations were optimised) by wet granulation method and applied the different kinetic models to study the drug release mechanisms.

Materials used in this study were obtained from the different sources. Lamotrigine was a gift sample from Aurobindo pharma Ltd, Hyderabad, India. HPMC K4M and HPMC K100M were procured from colorcon Asia Pvt Ltd, Goa. Other excipients such as mannitol and magnesium stearate were procured from S.D. Fine Chem. Ltd., Mumbai.

The factorial design is a technique that allows identification of factors involved in a process and assesses their relative importance. In addition, any interaction between factors chosen can be identified. Construction of a factorial design involves the selection of parameters and the choice of responses12.

The three levels of factor X1 (HPMC K4M) at a concentration of 7.5%, 12.5%, 17.5%.  three levels of factor X2 (HPMC K100M) at a concentration of 7.5%, 12.5%, 17.5% (% with respect to total tablet weight) was taken as the rationale for the design of the lamotrigine SR tablet formulation.  Totally nine lamotrigine sustained release  tablet formulations were prepared employing selected combinations of the two factors i.e X1, X2 as per 32 Factorial and evaluated to find out the significance of combined effects of  X1, X2 to select the best combination and the concentration  required to achieve the desired prolonged/ sustained release of drug from the dosage form.

TABLE 2: FORMULAE FOR THE PREPARATION OF LAMOTRIGINE SUSTAINED RELEASE TABLETS AS PER EXPERIMENTAL DESIGN

The hardness of the tablets was tested by diametric compression using a Monsanto Hardness Tester. A tablet hardness of about 2-4 kg/cm2 is considered adequate for mechanical stability.

The friability of the tablets was measured in a Roche friabilator (Camp-bell Electronics, Mumbai). Tablets of a known weight (W0) or a sample of 20 tablets are dedusted in a drum for a fixed time (100 revolutions) and weighed (W) again. Percentage friability was calculated from the loss in weight as given in equation as below. The weight loss should not be more than 1 %

In this test, 20 tablets were randomly selected and the percent drug content was determined, the

tablets contained not less than 85% or more than 115% of the labelled drug content can be considered as the test was passed.

Weighed and finely powdered not less than 20 tablets were taken and transfer an accurately weighed portion of the powder equivalent to about 200 mg of lamotrigine in to a 100 ml volumetric flask. Add approximately 60ml of methanol and shake and sonicate for 10 min to complete the extraction and dilute the methanolic solution with water to make up the volume. From this, pipette out a 2ml aliquot into a 100ml volumetric flask, dilute with mobile phase up to required volume and mixed well. The obtained solution was filtered through the whatman filter paper and the absorbance of solution was measured at 254 nm using UV-visible spectrophotometer.

Thickness of the all tablet formulations were measured using vernier calipers by placing tablet between two arms of the vernier calipers. The similar procedure was followed to measure the diameter.

The In-vitro dissolution study  for the  lamotrigine sustained release tablets  were carried out in USP XXIII type-II dissolution test apparatus (Paddle type) using 900 ml of 0.1 N HCl as dissolution medium for 12 hours at 50 rpm and temperature 37±0.5°C. At predetermined time intervals, 5 ml of the samples were withdrawn by means of a syringe fitted with a pre-filter, the volume withdrawn at each interval was replaced with same quantity of fresh dissolution medium. The resultant samples were analyzed for the presence of the drug release by measuring the absorbance at 254 nm using UV Visible spectrophotometer after suitable dilutions. The determinations were performed in triplicate (n=3).

The dissolution profile of all the formulations was fitted in to zero-order, first-order, Higuchi and Korsmeyer-peppas models to ascertain the kinetic modeling of drug release15, 16, 17.

Sustained release tablets of lamotrigine were prepared and optimized by 32 factorial design in order to select the best combination of different rate retarding polymers, HPMC K4M, HPMC K100M and also to achieve the desired prolong/sustained release of drug from the dosage form. The two factorial parameters involved in the development of formulations are, quantity of HPMC K4M & HPMC K100M polymers as independent variables (X1, X2), and  In vitro dissolution parameters such as  t10%, t50% & K1 as dependent variables. Totally nine formulations were prepared using 3 levels of 2 factors and all the formulations containing 200 mg of lamotrigine were prepared as a sustained release tablet dosage form by wet granulation technique as per the formulae given in Table 2.

All the prepared tablets were evaluated for different post compression parameters, drug content, mean hardness, friability, mean diameter, mean thickness as per official methods and results are given in Table 3. The hardness of tablets was in the range of 4.3-5.0 Kg/cm2. Weight loss in the friability test was less than 0.52%. Drug content of prepared tablets was within 97±3.56%. In-vitro Dissolution studies were performed for prepared tables using 0.1 N HCl as a dissolution media. The In-vitro dissolution profiles of tablets are shown in Fig.1 and the dissolution parameters are given in Table 4.

Much variation was observed in the dissolution rate (K1), t10%, t50% due to formulation variables. Formulation F5  containing 50 mg of HPMC K4M, 50 mg of HPMC K100M showed promising dissolution parameter (K1=0.123, t10%= 0.856 h, t50% = 5.635 h). The difference in burst effect of the initial time is a result of the difference in the viscosity of the polymeric mixtures. Dortunc and Gunal have reported that increased viscosity resulted in a corresponding decrease in the drug release, which might be due to the result of thicker gel layer formulation18.

The In -vitro dissolution data of lamotrigine SR formulations  was subjected to goodness of fit test by linear regression analysis according to zero order and first order kinetic equations, Higuchi’s and Korsmeyer-Peppas models to assess the mechanism of drug release.

The results of linear regression analysis including regression coefficients are summarized in Table 4   and plots shown in Fig.1, 2, 3, 4. It was observed from the above that dissolution of all the tablets followed first order kinetics (except F7) with co-efficient of determination (R2) values above 0.946. The values of r of factorial formulations for Higuchi’s equation was found to be in the range of 0.973-0.996, which shows that the data fitted well to Higuchi’s square root of time equation confirming the release followed diffusion mechanism.

Polynomial equation for 3² full factorial designs is given in Equation

Where, Y is dependent variable, b0 arithmetic mean response of nine batches, and b1 estimated co-efficient for factor X1. The main effects (X1 and X2) represent the average result of changing one factor at a time from its low to high value. The interaction term (X1X2) shows how the response changes when two factors are simultaneously changed. The polynomial terms (X1² and X2²) are included to investigate non-linearity. The equations for K1, t10% and t50% developed as follows,

The positive sign for co-efficient of X1 in Y2 and Y3 equations indicates that, as the concentration of HPMC K4M increases, t10% and t50% value increases. In other words the data demonstrate that both X1 (amount of HPMC K4M) and X2 (amount of HPMC K100M) affect the time required for drug release (t50% and t70%). From the results it can be concluded that, and increase in the amount of the polymer leads to decrease in release rate of the drug and drug release pattern may be changed by appropriate selection of the X1 and X2 levels. The final best (Optimised) formulation (F5) is compared with marketed product (Lamictal) shows similarity factor (f2) 85.016, difference factor (f1) 2.422 (There is no significant difference in drug release because tcal is<0.05).

TABLE 3: POST-COMPRESSION PARAMETERS FOR THE FORMULATIONS 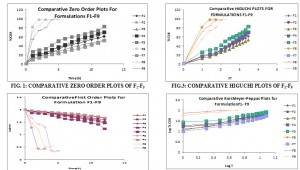 CONCLUSIONS: The present research work envisages the applicability of hydrophilic polymers such as HPMC K4M and HPMC K100M in the design and development of sustained release tablet formulations of lamotrigine utilizing the 32 factorial design. From the results it was clearly understand that as the polymer concentration increases the release rate of drug was retarded and both of these polymers can be used in combination since do not interact with the drug which may be more helpful in achieving the desired sustained release of the drug for longer periods.

The optimized formulations followed Higuchi’s kinetics while the drug release mechanism was found to be Non Fickian, anomalous type, controlled by diffusion through the swollen matrix. On the basis of evaluation parameters, the optimized formulation F5 may be used once a day administration in the management of epilepsy.