The attachment could be between an artificial material and biological substrate such as adhesion between a polymer and biological membrane. In case of polymer attached to the mucin layer of mucosal tissue, the term mucoadhesion is used. Mucoadhesive materials have been investigated and identified 5. These are generally hydrophilic macromolecules that contain numerous hydrogen bond forming groups (e.g. hydroxyl and carboxyl groups) and will hydrate and swell when placed in contact with water.

In most cases these materials require wetting to become adhesive. However, over hydration may result in the formation of slippery mucilage and a loss of adhesive properties. Mucoadhesive microspheres include microparticles and microcapsules (having a core of the drug) of 1-1000μm in diameter and consisting either entirely of a mucoadhesive polymer or having an outer coating of it, respectively 6.

Microspheres in general, have the potential to be used for targeted and controlled release drug delivery but coupling of mucoadhesive properties to microspheres as additional advantages e.g. efficient absorption and enhanced bioavailability of the drugs due to high surface to volume ratio, a much more intimate contact with the mucus layer. Mucoadhesive microspheres can be tailored to adhere any mucosal tissue including those found in eye, nasal cavity, urinary and gastrointestinal tract, thus offering the possibilities of localized as well as systemic controlled release of drugs. Various natural polymers have been used for preparing mucoadhesive microspheres.

Microspheres provide sustained release over a prolonged period of time and better bioavailability than conventional dosage forms which reduces dosing frequency, side effects and thereby increases patient compliance. The smaller size and spherical shape of microspheres increases the surface area which increases the bioavailability of the dosage form. It also has advantage over the microparticles and nano particles as they tend to accumulate at the site of action but microspheres due to its smaller size (i.e. micron size) and spherical shape can be injected and hence shows better bio-availability. Microspheres are defined as spherical microscopic particles having a size range of 1- 1000μm.

MATERIALS AND METHODS: Salbutamol sulphate was obtained as a gift sample from Supriya Lifesciences Ltd., Mumbai. Sterculia foetida gum and sunflower oil was purchased from the local market. Liquid paraffin and Span 20 was obtained from Loba Chemicals, Mumbai. All other reagents used were of analytical grade.

Preparation of salbutamol sulphate microspheres using Sterculia foetida gum as a natural polymer: Microspheres were prepared by water in oil emulsification solvent evaporation technique. A polymeric aqueous solution was  made  adding drug  and  the  polymer  and  then  the  solution  poured  into  100 ml  of  light  liquid  paraffin containing 0.5% span-20 as an emulsifying  agent. The aqueous  phase  was  emulsified  in  oily  phase by stirring  the  system  in  a  500ml   beaker.  Constant stirring at 500-1000 rpm was carried out using mechanical stirrer. The beaker and its  content were heated at 250oC using  heating  mantle, stirring  and  heating  were  maintained  for  2.5 hrs.  The aqueous phase was evaporated.  The  microspheres were washed with Iso-propyl  alcohol  or  n-hexane,  separated  and  dried  at  room  temperature.  The  same  procedure  was  done  by  changing  the  oil  phase  by  sunflower  oil.

Total 18 batches were prepared, 9 batches with  liquid  paraffin oil phase and 9 batches with  sunflower  oil  phase  with  different  drug: polymer  ratios . For all batches RPM and temperature were maintained constant. All the batches were selected for optimization and evaluated.

Constant stirring at 500-1000 rpm was carried out using mechanical stirrer. The beaker and its content were heated at 25oC using heating mantle; stirring and heating were maintained for 2.5 hrs. The aqueous phase was evaporated.  The microspheres were washed with Iso-propyl alcohol or n-hexane, separated and dried at room temperature.

The same procedure was done by changing the oil phase by sunflower oil. Total 18 batches were prepared, 9 batches  with  liquid  paraffin  oil phase  and  9  batches  with  sunflower  oil  phase  with  different drug: polymer ratios. For all batches   RPM and temperature were maintained constant. All the batches were selected for optimization and evaluated. 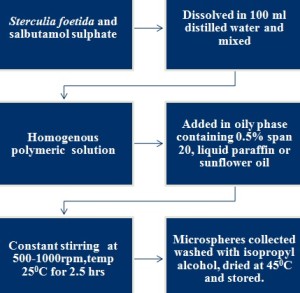 Flow Properties: The flow properties of drug-loadedmicrospheres were investigated by measuring theangle of repose using fixed base cone method.The bulk and tapped densities were also measuredin a 10ml graduated measuring cylinder as ameasure of packability of the microspheres.

Particle size analysis 7: The microsphere size   distribution was determined by the method using    a calibrated stage micrometer (μm). Different  sizes  in  a  batch  were  determined  by  MOTIC  PLUS – 2.0 ml  instrument. The average sizes of the microspheres were calculated.

Percentage yield: The dried microspheres of each batch are weighed separately and percentage yield is calculated by using following equation:

Drug Content:50mg of mucoadhesive micro-spheres were weighed and powdered. This was dissolved in phosphate   buffer (6.8 pH) in 100 ml volumetric flask and made up to volume. The solution was shaken occasionally for 1h and filtered. From this, 1ml of solution was diluted upto 100 ml with pH 6.8 buffer solution in 100 ml volumetric flask. The drug content was  analyzed  by measuring absorbance in a UV spectrophoto-meter at  270  nm  using  pH 6.8 phosphate  buffer  as  blank.  The studies were carried out in triplicate. Drug content is calculated by the formula:

Microencapsulation efficiency: 100mg of   muco-adhesive microspheres  were  accurately  weighed.  They were powdered and extracted with 100 ml of methanol.  Further, it was serially diluted with   pH 6.8 phosphate buffer solution. The resulting solution was analyzed for salbutamol sulphate drug content by measuring absorbance in a UV spectro-photometer at 270 nm using pH 6.8 phosphate buffer   as blank.  The   studies   were   carried out in triplicate. Encapsulation   efficiency (%) was calculated using the formula;

Percentage of moisture loss: The salbutamol sulphate loaded microspheres of different polymers were evaluated for percentage of moisture loss which sharing an idea about its hydrophilic   nature.  The microspheres weighed initially and kept in desiccators containing calcium chloride at 37°C for 24 hours. When no further change in weight of sample was observed, the final weight was noted down.

In-vitro mucoadhesion 8: The mucoadhesive  property  of  microspheres  was  evaluated  by  an in  vitro  adhesion  testing  method  known  as  wash  off  method.  Freshly excised  piece  of  intestinal  mucosa  (2 x 2 cm)  from  albino  rat  were mounted  onto  glass  slides  (3 x 1 inch)  with  cyanoacrylate  glue.

Two glass slides  were  connected  with  a suitable  support,  about  50  microspheres  were spread  on  to  each  wet  rinsed  tissue  specimen and immediately thereafter  the  support  was  hung  onto  the  arm  of  a  USP  tablet disintegrating  test  machine.

In-vitro drug release studies 9: The release of Salbutamol sulphate from mucoadhesive micro-spheres was investigated in pH 6.8 phosphate   buffer   solution   as   a dissolution   medium   (900 ml)   using USP type I apparatus.  A  sample  of  microspheres  equivalent   to  50  mg  of salbutamol  sulphate   were  taken  in  the  muslin  cloth  tied  on  to  the  paddle of  apparatus.   A   speed of 50 rpm and temperature of 37±0.5oC was maintained throughout the experiment. At fixed intervals,   aliquots (5 ml) was withdrawn and replaced with fresh dissolution   media.

The concentration   of   drug   released   at   different   time   intervals   was then determined by measuring the absorbance using Hitachi U-2000 spectrophotometer at 276 nm   against   blank. The studies were carried out   in   triplicate.  The   in vitro dissolution   data   of   oral   mucoadhesive microspheres   were tabulated   and calculated by using dissolution software viz., PCP DISSO V3.0.

In-vitro  drug  release kinetics: In order to study the exact mechanism of the drug release from microspheres, drug release data was analyzed according to Zero Order, First Order, Higuchi square root, Hixon Crowell, Korsemeyer model. The criterion for selecting the most appropriate model was chosen on the basis of goodness to fit test.

To analyze the mechanism for the release and release rate kinetics of the dosage form, the data obtained was fitted in to Zero order, First order, Higuchi matrix and Korsemeyer and Peppas model. Using PCP-DISSO – v2 software.  Comparing the r2-values obtained, the best-fit model was selected.

Scanning Electron Microscopy 10:The particle size, shape and surface morphology of micro-spheres were examined by scanning electron   microscopy (SEM). Microspheres were fixed on   aluminium   studs   and   coated   with   gold   using a sputter coater   SC 502, under Vacuum [0.1 mm Hg].  The microspheres   were then   analyzed   by   scanning   electron   microscopy (SEM) [Model JSM-840 A, Joel. Japan].

Evaluation of Mucoadhesive Microspheres: All the evaluation parameters were performed with all the 18 batches. But from  the  results  of  micromeritic  properties, swelling  studies, drug  content, encapsulation  efficiency, % yield and  particle size of microsphere batches prepared in sunflower oil showed better than of the microsphere batches of liquid paraffin. Thus, the batches of microspheres prepared from sunflower oil were considered for further studies. Further from in vitro mucoadhesion and release studies four batches were optimized S2, S6, S8 and S9.

Micromeritic  properties: It  was  noticed  that  from  the  two  different  oil  batches, sunflower  oil  batches  showed  better  results  compared  to  liquid  paraffin  batches. The  microspheres  prepared  from  sunflower  oil  were  easily  washed compared  to  liquid  paraffin. They also showed excellent flowability this may be due to less viscosity of sunflower oil than liquid paraffin (table 3).

In-vitro mucoadhesion test: The no. of  micro-spheres   adhering  to  the  tissue  were  calculated  after  2hr, 4hr, 6hr, 8hr. After  determination  it  was found that  batch S9 showed  highest  percent  78%  mucoadhesion  than  other  batches. Three batches showed comparatively higher muco-adhesion in the following order S6<S8<S9 (fig. 5).

In-vitro  release  studies:  The  maximum  in-vitro  drug  release  was  found  to  be  99.77%  for  formulation  S9  at 12th hour. Formulation   S6, S8 showed maximum release of 95.8%, 97.07%   respectively at 12th hour. The release data were analyzed on the basis of best fitting models.  The release rates k and n of each model were calculated by linear regression analysis. Coefficients of correlation (r2) were used to evaluate the accuracy of the fit (table 6, fig. 6).

FTIR Studies: FTIR Spectral analysis was performed to study the drug polymer interaction.It was concluded that there were no changes in the peak shape and no shift of peaks. Thus, there  is  no  interaction  between  drug  polymer.  So they are compatible with each other (fig. 7-12).

Scanning electron microscopy: SEM of the selected formulation was performed. All  the  selected  microspheres  loaded  with  salbutamol  sulphate  were  smooth, almost  spherical, and  uniform.(fig 13-16)

Accelerated stability studies: Accelerated stability study data of the medicated microspheres are shown in table 7. At the initial  level and at the final level  of  the  accelerated  stability  study, the  tested  microspheres  showed  almost  similar  particle  size, drug  content and  drug  release  were  observed. No color changes or unexpected change were observed. All the optimized  batches were  found stable after 2 months without much  variation  in  particle  size,  drug  content, drug  release. 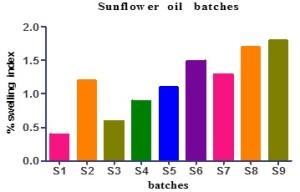 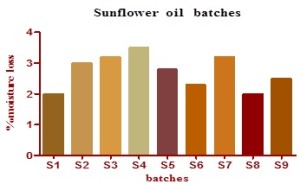 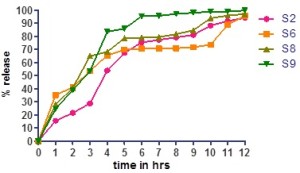 FTIR Studies: The FTIR spectrum of Salbutamol sulphate and Sterculia foetida gum alone and the Optimized batches of Microspheres were presented in figures: 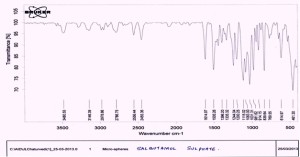 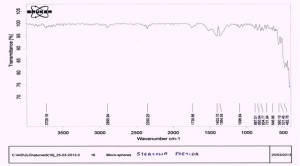 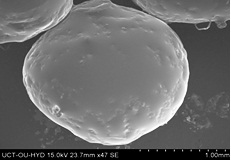 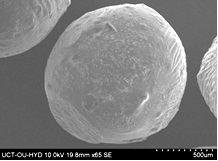 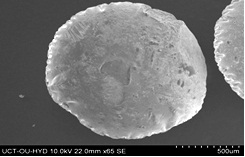 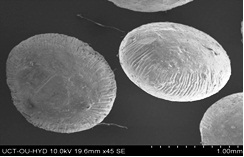 CONCLUSION: From the above experimental results, it can be concluded that: