ABSTRACT: The aim of this study was to develop a fast releasing oral polymeric thin film, prepared by solvent casting method, with good mechanical properties, instant disintegration and dissolution. Diphenhydramine hydrochloride, an antihistamine drug belonging to BCS class I was used for oral thin film preparation. The formulations from the preliminary trial were analyzed which was applied to optimize the type of polymers (Gelatin and HPMC E15), concentration of polymers, plasticizer (Glycerol, Propylene Glycol, PEG 400), surfactant (TWEEN 80) and sweetener (Mannitol).The resultant films were evaluated for thickness, folding endurance, drug content, Surface pH, in vitro disintegration time, in vitro dissolution  studies .Oral thin films which were prepared with surfactant  showed better results i.e., good disintegrating and dissolution properties than without surfactant. The optimized film disintegrated in less than 30s, releasing more than 90% of drug within 90sec.

INTRODUCTION:  Oral thin film is a dosage form containing medicinal substances which disintegrates rapidly, usually within a matter of seconds, when placed upon the tongue” 1.

It employs water dissolving polymer which is a hydrocolloid which may be bio adhesive polymer which allows the dosage form to quickly hydrate, adhere, dissolve when placed on the tongue or the oral cavity to provide rapid local and systemic drug delivery 2. Due to rapid dissolving of the film, the term soluble film is preferred by FDA, whereas the European Medicines Agency is using orodispersible film 3.

Oral polymeric thin films are the most advanced form of oral solid dosage forms due to more flexibility and comfort. It improves the efficacy of the active pharmaceutical ingredients by dissolving within minute in oral cavity after the contact with less saliva as compared to the fast dissolving tablets, without chewing and no need of water for the administration 4.

Oral films are preferred by patients suffering from dysphasia, motion sickness, repeated emesis and mental disorders since they are unable to swallow large amounts of water with dosage forms. The advantages of convenient dosing and portability of oral films have led to a wide applicability of this dosage form in pediatric as well as geriatric patients. The drug used is Diphenhydramine Hydrochloride which is a histamine H1 antagonist and used as an antiemetic, antitussive, for dermatoses and pruritus, for hypersensitivity reactions, as an ingredient in common cold preparations 5.

The polymers used are gelatin and HPMCE15. Gelatin is a natural polymer available. Under specific conditions (temperature, solvent, pH) gelatin macromolecules can display flexibility sufficient to realize a wide variety of conformations. HPMC E15 is another polymer used due to its greater disintegration, dissolution and good film forming properties. The important step involved during dissolution of a hydrophilic polymer include absorption of water on polymer, breaking of polymer bonds with a simultaneous creation of water polymer bonds, separation of polymer chains, swelling and finally dispersion of polymer chains in medium 6.

The main aim of the present study was to prepare oral thin film of Diphenhydramine HCl for rapid dissolution in oral cavity. The films were prepared by solvent casting method and evaluated. This study optimizes the type, concentration of polymer and also optimizes the plasticizer and its concentration.

Solvent casting method 7: Oral thin films were prepared by dissolving the polymer (Gelatin or HPMC) in solvent mixture (Millipore water and Ethanol), with continuous stirring Drug, Mannitol is added. To the resulting solution plasticizers (Glycerol, PEG 400, Propylene glycol) and surfactants (Tween 80) are added subsequently and stirred for 15 minutes. These solutions were casted slowly on to a glass plate of diameter 5cm without formation of air bubbles. (Each strip 2*2 cm2 consists of 30mg of drug) These plates were kept aside for 48 hrs and dried films are carefully separated from the plate and evaluated. Various formulations were prepared as per table 1 & 2.

5ml aliquots of samples was taken for every 30sec and followed by replacement of 5ml fresh phosphate buffer. The withdrawn samples were analysed spectrophotometrically at a wavelength of 259nm.

Fa6 shows still lesser due to less surfactant concentration. The formulation without surfactant shows the following order of release F17 (89.2%)> F15 (87.6%) > F13 (85.9%). The other formulation released almost appropriately same amount of drug. The least percentage drug release was found to be F7. 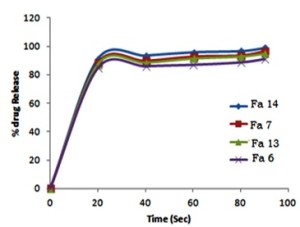 Dissolution rate by Conductivity method: Conductivity is determined ionisable components. The film consists of Diphenhydramine HCl which is ionisable. Based on the release of the drug conductivity (µsimen/min) alters.

TABLE 4: THE FOLLOWING TABLE SHOWS THE PROPERTIES OF THE SUCCESSFUL FORMULATIONS: