ABSTRACT: The poor bioavailability of ophthalmic solutions caused by dilution and drainage from the eye can be overcome by using in situ forming ophthalmic drug delivery system prepared from polymer that exhibit reversible liquid–gel phase transition.  The objective of the study was to develop optimized formulation of  in situ ophthalmic gel of Epinastine hydrochloride, an antihistaminic drug, using a pH triggered polymer, Carbopol as a gelling polymer and HPMC E-50LV (hydroxyl propyl methyl cellulose) as release retardant. The 32 full factorial design was employed to optimize the formulation considering Carbopol and HPMC as independent variables. The formulations were assessed for appearance, gelling ability, sterility, pH, drug content, viscosity, release through cellophane membrane & corneal membrane of goat, ocular irritation study & stability study as per ICH guidelines. Formulations F3 and F7 were found to be the good formulations from the nine formulations developed by 32 factorial design. The study revealed that the in situ system of epinastine hydrochloride sustained the effect of drug to 12 hours. The formulations F3 and F7 extended the release of drug upto 12 hours as compare to marketed product (EPINA eye drops) which released 99.22% release within 6hrs.

INTRODUCTION: Ophthalmic preparations are defined in the USP as “sterile dosage forms, essentially free from foreign particles, suitably compounded and packed for instillation into the eye.” In eye drug is administered at various site such as cornea, conjunctiva and sclera for better achievement of bioavailability and required effects related with the therapy.

The drugs for allergies, glaucoma, bacterial infections, conjunctivitis, keratitis, local anaesthetics and viral infection can be administered at suitable sites in the eye.

Before reaching the anatomical barrier of the cornea, any drug molecule administered by the topical route has to cross the precorneal barriers. The medication, upon instillation, stimulates the protective physiological mechanisms, i.e., blinking and tears production, which exert defense against ophthalmic drug delivery. Thus the bioavailability of ocular delivery systems is affected by any of the following factors

Consequently, it is imperative to optimize ophthalmic drug delivery. One of the ways to do so is by addition of polymers of various grades, development of viscous gel, development of colloidal suspension or using erodible or non erodible insert to prolong the pre-corneal drug retention. A significant increase in pre-corneal residence time of drugs and consequently increase in bioavailability can be achieved by using delivery systems based on concept of in situ gel formation. These systems consist of polymers, which undergo reversible sol to gel phase transition in response to physiological stimuli. The sol-gel transition can be induced by a shift in pH, temperature or ion activated systems. This type of gel combines the advantage of a solution (accurate and reproducible administration of drug) and gels (prolonged residence time) for enhancing ocular bioavailability 1-3

Epinastine hydrochloride is an antihistaminic drug with potent anti-allergic and modest anti-inflammatory activity. It is indicated for the prevention of itching associated with allergic conjunctivitis. The topical Epinastine hydrochloride may be useful for inflammatory conditions in the eye and is approved for the treatment of seasonal allergic conjunctivitis and ocular inflammation. In the present study, an attempt is made to develop pH triggered in situ gelling ophthalmic delivery system of Epinastine hydrochloride using pH sensitive polymer, carbopol 974 and viscosity modifier such as HPMC E50LV for sustained drug delivery by enhancing residence time of drug in eye.

The Epinastine hydrochloride and Carbopol 974 was gifted by Cipla Research Center, Mumbai, India. HPMC E-50LV was gifted by Colorcon Asia Pvt. Ltd., Goa. All chemicals used were of analytical grade.

The preliminary batches of 0.05% Epinastine hydrochloride were formulated using Carbopol 974, HPMC E-50LV, Benzalkonium chloride, buffering agent and disodium edetate 5. The batches were evaluated for in vitro in situ gelation in Artificial Tear Fluid (ATF) and for viscosity to optimize the concentration of Carbopol 974 and HPMC E-50LV for final formulation as shown in Table 1

(–): The solutions which did not undergo phase transition at all

(+): The solutions which exhibited phase transition only after 60 sec. and the formed gels which collapsed within 1-2 hrs

(++): The solutions which formed the gels after 60 sec. however, the gels formed did not remain stable for more than 3 hrs.

(+++): The solutions which exhibited  phase transition within  60 sec. and the gels so formed remained stable for more than 7-8 hrs

The above preliminary batches indicated that

Hence the level of Carbopol was decided based on in situ gelling capacity between 0.1 to 0.3%.

TABLE 1: FORMULATION OF PRELIMINARY BATCHES AND ITS EVALUATION

The 0.05% w/v solutions of Epinastine hydrochloride were prepared using different concentrations of Carbopol as per Table 2. The two independent variables selected were HPMC E-50LV (X1) and Carbopol 974 (X2), and the dependent variables were viscosity (Y1) and release of drug (Y2).  The factorial designed batches are shown in Table 2.

Accurately weighed quantity of monobasic sodium phosphate and disodium edetate were dissolved in a part quantity of purified water. Separately the carbopol was sprinkled over a part quantity of hot water (temperature 60-70°C) and was allowed to hydrate completely to produce transparent viscous solution. Both the solutions are mixed which results into drop in viscosity of carbopol solution. The pH of this solution was adjusted to 7.0±0.1 with 0.1N sodium hydroxide or hydrochloric acid. The viscosity of formulation was found to be increased during pH adjustment step. The above solution was subjected to bulk autoclaving (Solution A). Separately in a part quantity of water epinastine hydrochloride was dissolved. In this solution benzalkonium chloride solution was added under slow stirring and this solution was filtered through 0.22 mm polyether sulphone (PES) membrane filter (Make: Pall) (Solution B).

The solution B was mixed slowly to solution A with continuous mechanical stirring at 100 rpm to produce clear solution. The formulation was filled into LDPE bottle with translucent droptainer and white opaque cap (Make: Rexam).

Evaluation of in situ gelling formulations:

The ophthalmic formulations were evaluated for various physical and performance characteristics i.e. for appearance/ clarity, pH, gelling ability, sterility, stability and viscosity. The test for sterility was confirmed by method B described in USP and the end point was judged visually noting the presence of turbidity in the inoculated media. Both positive and negative controls were also maintained simultaneously. The method of detection was visual inspection of turbidity.

The test for gelling ability was conducted using Artificial tear fluid (ATF). The transition of solution to viscous gel was observed visually and numerical scores were assigned depending upon the quickness of gel formation and time taken for collapse of gel structure on shaking the vials. The drug content was determined spectrophotometrically.

In vitro release was performed through cellophane membrane (pore size 0.45μm) using modified dissolution testing apparatus. The USP type-I apparatus (Basket type) was modified by replacing the basket with glass cylinder of same size. The glass cylinder was attached to the shaft of USP apparatus-1 (Basket type) instead of basket (as shown in Fig.1). The dissolution media was ATF (50 ml) maintained at 37 ± 0.5 °C. The sample (1 ml) was withdrawn at regular interval of 1 hr till 12 hr and it was replaced immediately with the same volume of ATF. The samples withdrawn were analyzed for drug content 7.

The selected formulations F3 & F7 were instilled (0.1ml) into the eye of rabbit. The eyeball was observed for acute toxicity symptoms i.e. redness, inflammation & tear flux at an interval of 1, 24, 48, 72 hrs and after 1 week. The ocular irritation study was measured on a scale of 0 to 4 8.

The formulations F3 and F7 were subjected to stability studies as per ICH guidelines. The formulations were assessed for appearance, gelation ability, sterility, pH, drug content and viscosity 12.

Population bioequivalence study was done by measurement of drop weights of formulation. The weight of each drop was measured for 10 drops each at 45° & 90° angle as per ASTM guideline 15. The study was conducted on 10 different bottles and mean drop weight of 10 bottles was compared with marketed formulation to establish the population bioequivalence.

The drug, Epinastine hydrochloride was characterized by observing its UV, DSC and IR spectrum. The formulated ophthalmic formulations were evaluated for various physical and performance characteristics.

The formulation of preliminary batches revealed in vitro gelation above the concentration of 0.075% Carbopol 974 and no gelation was observed below 0.075% of Carbopol 974. The ophthalmic formulations were observed carefully for color, odor and presence of suspended particulate matter if any. The clarity of solutions was further assessed by observing them against a dark and white background as described in the USP. The pH of all the formulations was found to be in the range of 7.0-7.5.

The ideal value of viscosity for ophthalmic solutions is important as it affects proper instillation of drops from containers, good spreadability of solutions in the eye and improved contact time in the eye. All the solutions were readily satisfying the parameter and hence were considered acceptable.

Viscosity increased with the increase in the concentration of carbopol from 0.1 to 0.3%. Similarly viscosity increased with the increase in the concentration of HPMC E-50LV for concentration from 0.6 to 1.0%. Increase in viscosity of ophthalmic solutions after instillation in eye was a desired feature for the purpose of sustaining therapeutics actions of the antihistaminic agent, epinastine hydrochloride, by providing increased precorneal residence time. The increase in viscosity was achieved due to the inclusion of carbopol which undergoes gelation at physiological pH. The results are recorded in Table 3. The test for sterility for the selected formulations   indicated no tubidity after incubation at specified conditions upto 14 days, while the positive controls revealed dense turbidity.

The test for in vitro gelation ability was performed to assess the gel characteristics which would affect drug release in the ATF. The numerical scores for gelling ability of solutions were found to vary with change in the concentration of Carbopol as shown in Table 4.

The phase transition of the ophthalmic formulations containing carbopol was found to be concentration dependent. Thus, the increased concentration of carbopol caused decrease in the time taken for gelation. The drug content was determined spectrophotometrically.

In vitro release through cellophane membrane revealed that with the increase in the concentration of HPMC E-50LV the release decreased due to the formation of gel structure. As the conc. Of carbopol increased from 0.1% to 0.3% there was further retardation in the release (batches F4, F5, F6 and F7, F8, F9). This may be accounted for the reduction in number and dimensions of the channels in the gel structure due to enhanced viscosity of gel. The kinetics of drug release mechanism (PCP Disso version 2.08 software) revealed matrix model kinetics. 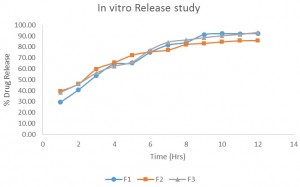 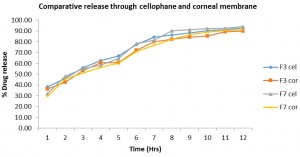 The ocular irritation study revealed the numerical score for the formulation F3 and F7 read zero, an indication of safe and non irritant for administration. The findings of the stability study suggested no significant change in the selected physical parameters for the formulations F3 and F7.

The release profile of the F3 and F7 were compared with that of marketed preparation (EPINA Eye drops), as shown in figure 6. The formulation F3 & F7 indicated sustained release of drug upto 12hr as compared to marketed product (EPINA eye drops) which released 99.22% release within 6hrs. 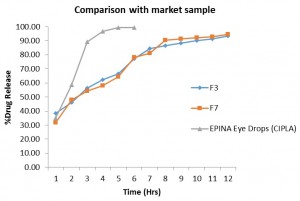 Population bioequivalence was carried out by comparing mean drop weight of developed formulation with marketed product of epinastine hydrochloride [EPINA Eye Drops manufactured by CIPLA]. The results are as appended in Table 5.

CONCLUSION: An attempt has been made to develop in situ gelling systems of Epinastine hydrochloride, anti-allergic & anti-inflammatory drug, to increase the ocular residence time. The variables Carbopol and HPMC E-50LV exhibited significant effect on the responses viscosity and release of the formulation. A stable in situ gelling system of Epinastine hydrochloride has been successfully developed using Carbopol and HPMC E-50LV and is a promising approach for the treatment seasonal allergic conjunctivitis to prevent the ocular itching.

ACKNOWLEDGEMENT: Authors wish to acknowledge to Maharashtra Institute of Technology (M.I.T) for their valuable support for testing and analysis