The purpose of the present research work was to develop ophthalmic sol to gel controlled delivery system of brimonidine, for the treatment of bacterial conjunctivitis having improved patient compliance and better therapeutic efficacy. For that purpose various formulations were prepared and evaluated for their quality parameters i.e. rheological, trans-corneal permeation, ocular irritation studies, microbiological study. The in-vitro release was determined by using modified flow through cell apparatus. The formulation X4Y2D shows very good result regarding to all quality parameters as well as shown sustained and satisfactory release over a period of 12 hours.

INTRODUCTION: Ophthalmic drug delivery is one of the most interesting and challenging endeavours facing the pharmaceutical scientist. The anatomy, physiology and biochemistry of the eye render this organ exquisitely impervious to foreign substances. Most ocular diseases are treated with topical application of solutions administered as eye-drops. These conventional dosage forms account for nearly 90% of the currently accessible marketed formulations. Eye drops used for soluble drug, require frequent instillations of highly concentrated solutions. The practical reasons for selecting solutions are the generally favourable cost advantage, the greater simplicity of formulation development and production and the good acceptance by patients despite a little blurring 1.

The conjunctiva is a thin transparent, vascularized mucus membrane, which lines the inner surface of the eyelids and is reflected onto the globe and forms a continuous surface area of 18 cm 2. At the corneal margin, it is structurally continuous with the corneal epithelium. The membrane is vascular and moistened by the tear film. The conjunctiva is composed of an epithelium, a highly vascularised substantia propria, and a submucosa or episclera. The bulbar epithelium consists of 5 to 7 cell layers. The structure resembles a palisade and not a pavement when compared to the corneal epithelium. At the surface, epithelial cells are connected by tight junctions, which render the conjunctiva relatively impermeable.

The conjunctiva is involved in the formation and maintenance of the precorneal tear film and in protection of the eye. Conjunctivitis commonly known as “pink eye” is an inflammation of the membrane (conjunctiva) that covers the eye and lines the inner surface of the eyelid. It usually affects both eyes at the same time, although it may start in one eye and spread to the other after a day or two. Some Causative micro-organism of bacterial conjunctivitis are Neisseria gonorrhoe, N. meingitidis, Pneumococcus (S. pneumonia), Haemo phililus aegyptius, H. influenza, S. aureus, Moraxella lacunata, N. Catarrhalis Coliforms,  Proteus species, C. Diptheriae. Many antibiotics are used to treat bacterial conjuctivitis such as Penicillin, Sulfonamides, Quinolones, Cephalo-sporins, Amino-glycosides etc.

One of the major problems encountered with solutions is the rapid and extensive elimination of drugs from the precorneal lachrymal fluid by solution drainage, lachrymation, and nonproductive absorption by the conjunctiva, which may cause undesirable side effects2.

Various approaches that have been attempted to increase the bioavailability and the duration of therapeutic action of ocular drugs can be divided into two categories. The first is based on the use of the drug delivery systems, which provide the controlled and continuous delivery of ophthalmic drugs. The second involves, maximizing corneal drug absorption and minimizing precorneal drug loss. The typical pulse entry type drug release behavior observed with ocular aqueous solutions (eye drops), suspensions, and ointments can be replaced by a more controlled, sustained, and continuous drug delivery, using a controlled release ocular drug delivery system. These systems can achieve therapeutic action with a smaller dose and a fewer systemic and ocular side effects.

The most common way to improve drug retention on the corneal surface is undoubtedly by using polymers to increase solution viscosity. Hydrogels are polymers endowed with an ability to swell in water or aqueous solvents and induce a liquid–gel transition. Currently, Pre- formed gels and In situ forming gels are two groups of hydrogels which distinguished2, 3, 4.

Brimonidine is an alpha adrenergic receptor agonist. It has a peak ocular hypotensive effect occurring at two hours post-dosing. Fluorophotometric studies in animals and humans suggest that it has a dual mechanism of action by reducing aqueous humor production and increase uveoscleral outflow. It exerts action without altering retinal capillary blood flow and long term application does not affect vasomotor activity of anterior optic nerve 5, 6.

A number of brimonidine eye drops are available in the market. Eye drops offers a disadvantage of being administered after very 3-4 hrs i.e. 4-times daily because of the drug loss due to drainage. Dilution, overflow, nasolachrymal drainage and reduced gradient for transport are some of the factors associated with eye drops that severely affect the bioavailability of the formulation. Considering these factors, in vitro sol to gel ophthalmic controlled drug delivery systems were prepared as these can provide controlled release of drug for a period of 12 hours without any drug loss or problems in vision or a constant feel presence of foreign matter 7. One of the very consideration to be kept in mine while developing newer drug delivery systems is the preference for selection of an older drug molecule having a well-established therapeutic potential but its effectiveness is reduced by the number of side effects produced by it. So, by reducing the total dose and dosing frequency its side effects can be eliminated or reduced without compromising with therapeutic efficacy. Taking above in view, brimonidine was selected as the drug candidate for the development of sol to gel ophthalmic drug delivery systems 8, 9.

The objective of the present research work was to develop ophthalmic sol to gel controlled delivery system of brimonidine, for the treatment of bacterial conjunctivitis having improved patient compliance and better therapeutic efficacy.

MATERIAL AND METHODOLOGY: Before starting the formulation development calculation of dose, adjustment of isotonicity, Isotonicity calculation for polymers was done.

The drug brimonidine was dissolved in acetate buffer of pH 4.8 and it was added to the placebo formulations. Then the final volume was made up with purified distilled water. The pH was adjusted to 6.0 with 0.1 M sodium hydroxide and 0.1 M hydrochloric acid solution. The developed formulations were filled in 5-ml capacity amber glass vials, closed with gray butyl rubber closures and sealed with aluminium caps. The formulations, in their final pack, were subjected to terminal sterilization by autoclaving at 121oC and 15 psig for 20 min. The formulae for the medicated formulations are given in table 1.

TABLE 2: PHYSICAL PARAMETERS OF THE MEDICATED SOL TO GEL FORMULATIONS

Graphs plotted between log percent of drug remaining Vs time were curves showing zero order permeation kinetics. However, a more proper curve was exhibited by formulation X4Y2D. This reflects a comparatively more uniform permeation from this formulation. Graph plotted for cumulative% of drug permeated Vs square root of time showed curves for both the formulations reflecting zero order kinetic for permeation by both formulations.

Graphs were also plotted between amounts of drug permeated, again indicating a zero order kinetic, Thus. From the above discussion, formulation X4Y2D was selected since it gave a higher and more uniform permeation through the cornea. Probable reason for obtaining the zero order kinetic of permeation from the formulations was that permeation occurred only by diffusion across cornea and not by erosion and diffusion as observed by in vitro release studies which resulted in first order release profile.

Microbiological studies: Microbiological studies were carried out wherein the antimicrobial activity of the optimized formulation X4Y2D was studied. The formulation was found to be effective against. S. aureus and E.coli as observed from the zones of inhibitions at 16, 20 and 24 hours of incubation. It was also observed that the diameter of zones of inhibition increased at 16, 20, and 24 hrs of incubation giving an indication of the controlled release behavior of the formulation.

Ocular irritation tests: Hen’s chorioallantoic membrane test was used to study the irritation potential of the optimized ophthalmic formulation X4Y2D as this test is a rapid, sensitive and inexpensive testing with incubated eggs is a borderline case between in vivo and in vitro systems and does not conflict with ethical and legal obligations as these days found with Draize’s test. The chorioallantioc membrane of the chick embryo is a complete tissue including veins, arteries and capillaries and is technically very easy to study. It responds to in injury with a complete inflammatory process, a process similar to that induced in the conjunctival tissue of the human eyes. The formulation was tested both in sol and gel form since the formulation is a sol to gel type system. Cumulative score for the formulation X4Y2D in solution and gel form were 0.66 and 0 respectively.

In vitro release studies with a continuous flow through cell apparatus: All the medicated formulations prepared were studied for in vitro release by using modified continuous flow through apparatus as shown in figure 2, as this in vitro release assembly very much closely resembles the human eye with respect to constant tear flow (turnover rate 0.66µL/min.), volume of tear secretion (7.5 µL), body temperature i.e. 37oC and blinking rate of 4-24 per min. Samplings were done at different time intervals for measurement of drug content released from the gel with U.V Spectro-photometry. Aliquots of the samples (3 mL) were taken out and replaced by 3 mL of fresh STF of pH 7.4 at each time point. The samples were filtered through Whatman filter paper no. 42 and estimated by U.V spectrophotometry at λmax of 246 nm taking STF of pH 7.4 as blank.

FIG. 1: COLUMN CHART SHOWING VISCOSITIES OF SOL (AT 25oC) AND GEL (AT 25oC) OF FORMULATION CODES 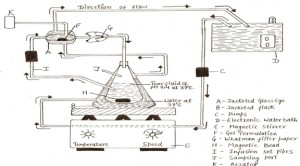 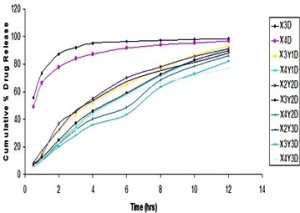 RESULT AND DISCUSSION: Sol to gel ocular drug delivery system of brimonidine was successfully prepared. The prepared formulation (X4Y2D) gave a sustained and satisfactory release over a period of 12 hrs. Formulation was able to give a high percentage of trans-corneal permeation. Ocular irritation test showed the formulation was non-irritating to the eye. Physiochemical properties of the formulation were also suitable for its administration into eye. Microbiological studies revealed the formulation was effective in treating the conjunctivitis as evidenced from the zone of inhibitions obtained in the study.

On the basis of physiochemical characterization of the sol to gel system, trans-corneal permeation studies, microbiological studies and ocular irritation tests it was concluded that brimonidine could be successfully administered through sol to gel type of formulations for the treatment of bacterial conjunctivitis.