The objective of the present study was to develop venlafaxine hydrochloride orodispersible tablet by using conventional techniques which are simple and cost effective such as use of superdisintegrant technology. In this, sodium starch glycollate and Crosscarmellose sodium were used in the rapid disintegration of the tablets. In this various trials were conducted for the selection of optimum concentration of superdisintegrant. The optimized formula aids in the stabilization of final product. The blend and compressed tablets were evaluated for physical characteristics like bulk density, tapped density, angle of repose, hardness, friability, disintegration time, wetting time, water absorption ratio, In-vitro dispersion time and chemical characteristics like In-vitro dissolution, content uniformity and assay. The stability study was conducted for the optimized batch.  This design of dosage form will open a new era for rapid disintegration tablets.

Over a decade, the demand for development of orally disintegrating tablets (ODTs) has enormously increased as it has significant impact on the patient compliance. Orally disintegrating tablets offer an advantage for populations who have difficulty in swallowing. It has been reported that Dysphagia (difficulty in swallowing) is common among all age groups and more specific with pediatric, geriatric population along with institutionalized patients and patients with nausea, vomiting, and motion sickness complications.

Materials: Venlafaxine Hydrochloride was obtained from Orchid Chemicals and Pharmaceuticals Ltd., Sodium starch glycollate and Crosscarmellose sodium were obtained from Rankem limited, Mumbai. Other excipients used in this formulation were of analytical grade.

Preparation of Venlafaxine Orodispersible tablets: Venlafaxine Hydrochloride, Microcrystalline cellulose, Superdisintegrants, Aerosil, Aspartame, Mannitol, Starch-1500 were sifted through # 40 mesh separately, collected in poly bags. Venlafaxine hydrochloride, Microcrystalline cellulose, Super- disintegrants, Aerosil, Aspartame, Mannitol, Starch-1500, Strawberry flavor were loaded into Octagonal blender and mixed. Sodium saccharine, Magnesium stearate, Talc were added to this and mixed for 10 minutes, then sifted through #60 mesh. Then the final blend was compressed in to tablets using Rotary press tablet compression machine. The formula for the preparation of various baches of Venlafaxine hydrochloride tablets were given in table 1.

Pre-compression parameters 47: The Angle of repose, Bulk density, Tapped density, Compressibility Index, Hausner’s ratio and % LOD were determined and results were given in Table 2 and 2.1.

Post compression parameters 48, 49: Thickness, Weight Variation Test, Hardness Test, Friability Test and Disintegration were determined as per the Standard Procedures and the results obtained are tabulated in Table 3 and 3.1.

Water absorption Ratio: A piece of tissue paper folded twice was placed in a small Petri dish containing 6 ml of water. A tablet was put on the paper & the time required for complete wetting was measured. The wetted tablet was then weighed.

Wetting time: A petri dish containing 6 ml of distilled water was taken and a tissue paper folded twice was placed in it. A tablet containing a small quantity of amaranth color was placed on this. Time required for the upper surface of the tablet to become complete red was noted.

In-vitro dispersion time 50: The test was performed by placing two tablets in 100 ml water and stirred gently, till the tablets get completely disintegrated. The formulation was taken in the form of a smooth dispersion if the complete dispersion passes through a sieve screen with a nominal mesh aperture of 710μm without leaving any residue on the mesh. Tablets were added to 100 ml of phosphate buffer solution, pH 6.8 at 37+0.5oC, Time required for complete dispersion of a tablet was measured.

Preparation of pH 6.8 phosphate buffer: 50 ml of monobasic potassium phosphate solution was placed in a 200 ml volumetric flask, to it 22.4 ml of 0.2 M sodium hydroxide was added and the volume was then made up to 200 ml with distilled water.

Procedure: Tablet dissolution was assessed using standard USP dissolution apparatus type II. The dissolution media used was 900ml of 6.8 phosphate buffer. The temperature was maintained at 37±0.5oC. At predetermined time intervals, an aliquot of 5 ml sample was withdrawn and made up to 10 ml with suitable diluents and results were given in Table 4, 4.1, 4.2 and 4.3. 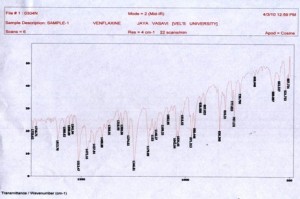 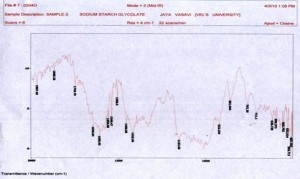 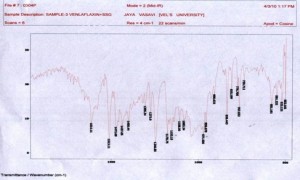 CONCLUSION: In present work an attempt was made to develop orodispersible tablets of venlafaxine hydrochloride by direct compression method using cross povidone, Crosscarmellose sodium and sodium starch glycollate as superdisintegrants and the optimum concentration were identified based on the in vitro drug release results. Based on the observation, it was concluded that batch F6 exhibited desirable properties and optimized drug release. The results demonstrated the effective use of orodispersible tablets of venlafaxine hydrochloride and as an ideal drug release formulation for treatment of hypertension.