ABSTRACT: Delivery of the desired drug as bioadhesive drug delivery systems has been subject of interest since 1980s. The various advantages associated with these systems made the buccal drug delivery as a novel route of drug administration. Buccal region offers an attractive route for the administration of systemic drug delivery. The objective of the study was to develop bucoadhesive buccal tablets of Chlorpheniramine Maleate and Phenylephrine Hydrochloride in combined dosage form. Buccal tablets were prepared by Wet granulation method using the Carbopol 934P, Hydroxy propyl methyl cellulose (HPMC), and sodium CMC as bioadhesive polymer. The tablets were evaluated for the precompression parameters and post compression parameter like bioadhesive strength, In vitro retention time, and In vitro drug release study and microbial analysis. The thickness and weight of the tablets, respectively, ranges from 3.82 ± 0.01 and 3.92 ± 0.02 and the weight of tablets ranges from 201-202mg.The Formulation containing sodium CMC and HPMC shows acceptable bioadhesive strength but erode respectively, with in 6 to 8 hours. The tablet formulation containing carbopol and Sodium CMC shows low bioadhesive strength, for release of drug and sufficient In vitro retention time. The optimized formulation obeys the zero order release kinetics.

INTRODUCTION: Buccal tablet is one which dissolves when it is held between the cheek and gum, permitting direct absorption of the active ingredient through the oral mucosa. Amongst the various routes of drug delivery, oral route is the most preferred to the patient. However, disadvantages such as hepatic first pass metabolism and enzymatic degradation within the GI tract limits its use for certain drugs.

The use of the oral cavity membranes as sites of drug administration has been the topic of increasing interest for the past decade. These drug delivery systems utilize property of bio adhesion of certain water soluble polymers which become adhesive on hydration and hence can be used for targeting particular site. Buccal delivery is the administration of the drug via buccal mucosa (lining of the cheek) to the systemic circulation. 4-6

Chlorphenamine Maleate (CPM) is a Antihistamine used in the treatment of swelling, pain, increased heart rate, and blood pressure and PHE is a decongestant that shrinks blood vessels in the nasal passages. Phenylephrine (PHE) is used to treat nasal and sinus congestion, or congestion of the tubes that drain fluid from your inner ears, called the eustachian tubes. It is readily absorbed from the gastrointestinal tract is usually effective within an hour. The half-life may be as long as 24 hours.   Therefore, it was selected for the design of a buccal drug delivery system (BDDS) with a view to improve its oral bioavailability.

In the present study, an attempt was made to design and optimize BDDS of CPM and PHE Carbopol and HPMC as the polymers and NaCMC.10-20

Formulation of Buccal Tablets: Buccal tablets were prepared by wet granulation method. All the materials were taken according to Table1. in clean vessels. Weight of the drug taken as per adjusted calculation for LOD and assay value.  Drug, lactose, polymer are sifted through 80mesh size. The talc and magnesium stearate are pass through mesh no.80.Sifted materials are transferred to a poly bag and mixed for 10 minutes by hand shaking. The drug, lactose and polymer are taken in an aluminium foil dish and few ml of acetone is added drop wise for preparing dough. Acetone is added as a granulating fluid and hand granulation is performed. Wet mass is dried for completed removal of acetone i.e. less than 2% W/W in tray drier. Dried granules are passed through 44mesh for sizing. Granules are lubricated by addition of talc and magnesium stearate. Lubricated blend compressed by using 8mm flat faced beveled edged with break line on one side using cadmach compression machine.

Bulk Density (Db): It is the ratio of total mass of powder to the bulk volume of powder. It was measured by pouring the weighed powder (passed through standard sieve # 20) into a measuring cylinder and initial weight was noted. This initial volume was called the bulk volume. From this the bulk density was calculated according to the formula mentioned below. It is expressed in gm/ml and is given by

Where, M and Vb are mass of powder and bulk volume of the powder respectively.

Where, M and Vt are mass of powder and tapped volume of the powder respectively.

Angle of Repose: Funnel method was used to measure the angle of repose of powder. The accurately weighed powders were taken in a funnel. The height of the funnel was adjusted in such a way that the tip of the funnel just touched the apex of the heap of the powder (2.0 cm above hard surface).  The powders were allowed to flow through the funnel freely onto the surface. The diameter of the powder cone was measured and angle of repose was calculated using the following equation: The frictional forces in a loose powder can be measured by the angle of repose.

Where H = Height of the powder cone.

R = Radius of the powder cone

Evaluation of physical properties: The thickness, hardness, weight uniformity, diameter, friability were determined by in similar way as stated for conventional oral tablets in the pharmacopoeia.

Swelling studies: The extent of swelling was measured in terms of percent of weight gained by the tablet. One tablet from each formulation was weighed and kept in petridish containing 10ml of phosphate buffer of pH 6.8. At the end of specified time intervals (1, 2, 3, 4, 5, 6 and 7 h) tablets were withdrawn from petridish and excess buffer blotted with tissue paper and weighed.  The % of weight gained by the tablet was calculated by using following formula:

W1= initial weight of the tablet

W2= Weight of the tablet after swelling.

Matrix erosion study: Each tablet weighed (W1) were immersed in a phosphate buffer pH 6.8 for pre determined time (1, 2, 4, 6 and 8hrs). After immersion of the tablets were wiped off by the excess of surface water by the use of filter paper. The swollen tablets were dried at 60oC for 24hr in an oven and kept in a dessicator for 48 hr prior to be reweighed (W2). The matrix erosion of the tablet was calculated by using the formula given in the equation i.e.

Surface pH study: A combined glass electrode is used for this purpose.  The tablet is allowed to swell by keeping it in contact with 1 ml of phosphate buffer pH 6.8 for 2 h at room temperature. The pH is identified by bringing the electrode into contact with the tablet surface and allowing equilibrating for 1 min.

Detachment Stress: This method is used to measure In vitro bioadhesive capacity of different polymers. It is a modified method developed by Mertti Marvole. Procaine buccal mucosa was obtained from local slaughter house & stored in kreb’s buffer solution. The experiment was performed within the 3 h of procurement of mucosa. The procaine mucosa was washed with the distilled water & carefully tied to the glass slide with the help of thread.

This portion was put in the petridish with a 6.8 buffer solution. During the experiment the solution was kept at 37°C.  The tablet was stuck on to the glass stopper by using cyano acrylate adhesive and that stopper tied with a thread. The other portion of that thread was tied to the plastic beaker. That tablet was put on mucosa by applying finger pressure for 30 s. After making contact between the tablet & mucosa for a fixed time of 3 s; the water was added through a pipe connected to a separating funnel containing water in a drop wise to that plastic beaker. The force needed to detach the tablet from the mucosa was measured.

In- vitro retention time: The In- vitro retention time is one of the most important physical parameters for an adhesive formulation. The formulation was pressed over the excised porcine buccal mucosa for 30 s after previously being secured on a glass slab and was immersed in a beaker containing 500 ml of phosphate buffer, pH 6.8, at 37±2°C.One stirrer was fitted at a distance of  5cm from the tablet and rotated  at 25 rpm. The time for complete erosion or detachment of the tablet from the mucosa was noted.

Disintegration test: The test was performed for buccal tablets which are not having backing; six tablets were taken randomly from each batch and placed in USP disintegration apparatus baskets. Apparatus was run for 4 hr and the basket was lift from the fluid, observe whether all of the tablets have disintegrated.

In-vitro drug release study: In-vitro dissolution studies were carried out in USP type-II tablet dissolution apparatus using 900ml phosphate buffer pH 6.8 as dissolution media.  The paddle was rotated at 50 rpm and the temperature was maintained at 37±0.5°C throughout the study. At predetermined time intervals 10 ml of the samples were withdrawn by. The volume withdrawn at each interval was replaced with same quantity of fresh dissolution medium maintained at 37±0.5°C. The samples were analyzed for drug releases by measuring the absorbance at 262nm CPM and 273nm PEH using UV-Visible spectrophotometer. All the studies were conducted in triplicate. And analysis of in-vitro drug released by kinetic model and anti- microbial analysis.

Fourier Transform Infra-red Spectroscopy Study: The tablet was crushed to form fine powder and compressed with KBr on Minipress (Jasco, Japan) to form a disk. The compressed disks were scanned over 400 to 4,000 cm−1, and characteristic peaks were recorded. The FTIR spectra of pure drug, polymers, excipients, physical mixture and formulations were recorded on Fourier transform infrared (FT-IR) instrument (Shimadzu, Japan) and characteristic peaks were recorded and matched with the standard peaks of pure Chlorphenamine Maleate and Phenylephrine Hydrochloride with the physical mixture of drug-excipients and formulations. 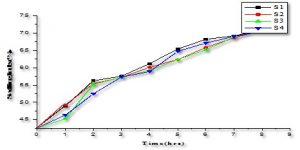 In all the formulations, as the polymer concentration increased, work of adhesion increased. The order of bioadhesion was HPMC < sodium CMC < Carbopol 934. Buccal tablets formulated with Carbopol 934 and HPMC showed low mucoadhesion.

In this study, formulation no. 1, 2, 3, 4 contain greater amount of polymers showing greater retention time i.e with in a range.

The tablets disintegrate for at least 4hrs and it is within limit.

The results obtained for drug content uniformity test showed that the drug content in all formulation was in the range of 95-96%for CPM and for 96-98% for PEH. And for kinetic study it was conclude that both drug satisfied for zero order.

Microbial Analysis: The antimicrobial activity of CPM and PHE from different tablet formulations was studied using S.para B and E.coli bacteria.

TABLE 14: ZONE OF INHIBITION FOR S.PARA B 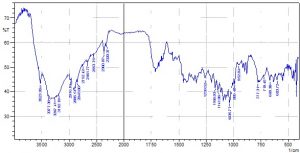 The compatibility evaluations were performed by Fourier transforms infra red spectroscopy, Studies implied that polymers and drug were compatible with each other. There was no interaction found between polymer and drug.

CONCLUSION: In the present study, an attempt was made to design and optimize BDDS of CPM and PHE using Carbopol and HPMC as the polymers. The compatibility evaluations were performed by Fourier transforms infra red spectroscopy, Studies implied that polymers and drug were compatible with each other. There was no interaction found between polymer and drug. Estimation of CPM and PHE in the prepared formulations was carried out by extracting the drug with phosphate buffer pH 6.8 solutions and the absorbance was measured at for CPM 263nm and for PHE 273nm.

ACKNOWLEDGEMENT: The authors thanks to Centeur pharmaceutical company Karaswada Mapusa-Goa for helping for compression of tablets and also to Govt. college of Arts, Science and Commerce’s Marcel-Goa for helping to carry out microbial analysis.