The objective of the work was to design oral FDFs of a drug meant for management of chronic disease like type-2 diabetes mellitus which affects mostly elderly population.  Glimepiride was the drug of choice because of its low dose. Since in vitro dissolution rate is the rate limiting step in drug absorption for class II drugs, in the present work,it was also proposed to make a complex of the drug with hydroxypropyl betacyclodextrin (HPBCD) to improve the physicochemical-pharmacokinetic characters of the drug. Various batches of FDFs were developed by the solvent casting method using water soluble polymers HPMC-E5 and Maltodextrin as film formers; Glycerol and PEG-600 as plasticizers; Sodium starch glycollate as super disintegrating/channeling  agent;  Sodium lauryl sulphate, polaxamer 407 and Tween-80 as surfactants; aspartame as a sweetener and brilliant blue as coloring agent. The drug was complexed with HPBCD by kneading method in the ratio of 1:1 and was incorporated in the film in the place of plain drug. Poloxamer containing films gave better physico-chemical characters than the other tested surfactants and addition of HPBCD complexed drug further improved the characters of the films. The formulation containing drug- HPBCD complex and polaxamer 407 as the surfactant gave lowest disintegration time, more uniform and faster dissolution profile, had better taste, highter Cmax and lower tmax values during in vivo studies. It can therefore be concluded that the drug in its most soluble form gives better physicochemical and pharmacokinetic characters which results in better management of the disease as patient compliance improves.

INTRODUCTION: Fast disintegrating oral films are solid dosage forms, which disperse or dissolve within one minute, when placed in the mouth without drinking or chewing 1. Fast disintegrating films (FDFs) are gaining interest rapidly in the pharmaceutical industry due to their many advantages the most important being improved patient compliance especially in pediatric and geriatric population 2 because of their ease of administration. Today, FDFs are a proven and accepted technology for the systemic delivery of APIs for over the counter medications and are in the early to mid development stages for prescription drugs 3. Literature survey indicates that till now these films were used for delivery of drugs meant for acute diseases.

Therefore, the objective of the present work was to design FDFs of a drug meant for management of chronic disease like type-2 diabetes mellitus which affects mostly elderly population.  Glimepiride was the drug of choice because of its low dose. It acts as an insulin secretagogue 4. Glimepiride is a medium-to-long acting sulfonylurea. It is sometimes classified as the first third-generation sulfonylurea 5, and sometimes classified as second-generation 6.  It lowers blood sugar by stimulating the release of insulin by pancreatic beta cells and by inducing increased activity of intracellular insulin receptors.

Glimepiride has low, pH-dependent solubility. In acidic and neutral aqueous media, glimepiride exhibits very poor solubility at 37oC (0.004 mg/mL). In media of pH >7, the solubility of the drug substance is slightly increased (pH 7.8, 0.02 mg/mL)7. This poor solubility may cause poor dissolution and unpredictable bioavailability 8.  Since in vitro dissolution rate is the rate limiting step in drug absorption for class II drugs like glimepiride 9, 10, in the present work,it was also proposed to make a complex of the drug with hydroxypropyl betacyclodextrin (HPβCD) to overcome the above said problem 11 and thus to better the quality of the dosage form to improve patient compliance.

Cyclodextrins are able to form inclusion complexes with poorly water soluble drugs and have been shown to improve pharmaceutical properties like solubility, dissolution rate, bioavailability, stability and even palatability without affecting their intrinsic lipophilicity or pharmacological properties. Out of the three parent cyclodextrins, β-cyclodextrin appears most useful as a pharmaceutical complexing agent because of its complexing ability, low cost and other properties 12, 13. The ability of cyclodextrins to form inclusion complexes is enhanced by substitution on the hydroxyl group 14.

Characterization of the Developed FDFs

A few ml of water was administered at the end of about 1 minute to ensure that the animal’s mouth is completely cleared off of any dissolved portions of the film. Blood samples for pharmacokinetic analysis were obtained immediately before drug administration and at 0.15, 0.30, 1, 2, 3, 4, 8, 12 and 24 h after dosing. Blood vessels were dilated by applying warm water before withdrawing the blood. Blood samples from marginal ear vein were collected in heparinized tubes using 22 gauge needles and were centrifuged for 10 minutes at 3,000 rpm at room temperature. Separated plasma was aspirated and transferred into plastic tubes and was stored at -20°C until assayed.

Statistical Analysis: The pharmacokinetic parameters of the tested formulations were compared by unpaired two-tailed t-test using GraphPad Prism® software (Version 4). A difference below the probability level of 0.05 was considered statistically significant. 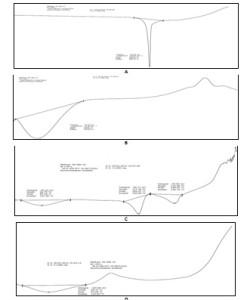 FIGURE 1: DSC THERMOGRAMS OF GLIMEPIRIDE (A), HPΒCD (B), PHYSICAL MIXTURE OF THE DRUG WITH THE POLYMERS-EXCIPIENTS (C) AND INCLUSION COMPLEX OF DRUG WITH HPΒCD (D)

Pure glimepiride exhibited an endothermic peak at 206.93oC, which started to melt at 204.26oC, the range of which corresponded to its melting point (205-2070C). In the DSC curve of pure HPβCD, the endothermic peak corresponding to the evaporation of water appeared at 80.45°C. The characteristic feature of the drug was lost in the physical mixture of drug with the polymers-excipients with no other relevant effects, thus ruling out any interaction between the drug and all the examined components.

In the DSC thermogram of inclusion complex of drug with HPβCD prepared by kneading method, the characteristic feature of the drug was lost as indicated in the Figure 1. The disappearance of the thermal feature of the drug indicated that the drug had penetrated into the cyclodextrin cavity replacing the water molecules19, and had complexed with the carrier.

As the thickness and the texture of formulation F2 was satisfactory, drug was incorporated in the same to obtain formulation F3.  As formulation F3 was gritty and ununiform in texture due to the insolubility of the drug in water,  formulation F4 was developed by incorporating poloxamer 407 as suspending agent. Surfactants are used as solublising or wetting or dispersing agents so that the film gets dissolved within seconds and releases active agent immediately. Poloxamer 407 is used as solubilising, wetting and dispersing agent in oral films 3.

TABLE 1: FORMULAS OF THE VARIOUS BATCHES OF THE DEVELOPED GLIMEPIRIDE FDFS

Values are in % of total solid content. qs – Quantity sufficient

As glimepiride is practically insoluble in water and has unpleasant taste, the drug was complexed with HPβCD by kneading method in the ratio of 1:114 and was incorporated in the film in the place of plain drug to obtain formulation F5. Formulations F6 and F7 contained SLS and Tween 80 respectively in the place of poloxamer 407 as it was proposed to evaluate the effect of various surfactants at the same concentration on the physicochemical properties of the dosage form. Formulations F3 to F7 contained aspartame and formulations F5 to F7 contained coloring agent.

Characterization of the Developed FDFs

TABLE 2: PHYSICOCHEMICAL CHARACTERS OF THE VARIOUS BATCHES OF THE DEVELOPED GLIMEPIRIDE FDFS 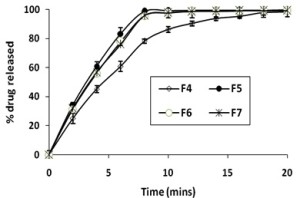 FIGURE 2: DISSOLUTION PROFILES OF THE DEVELOPED FORMULATIONS F4 TO F7

Formulations F5 to F7 containing drug- HPβCD complex released almost 100% of the drug by 8th minute whereas only 78.17%± 3.430258 of the drug was released from the formulation F4 during the same duration of time. Among the formulations F5 to F7, as the dissolution profile of formulation F5 was found to be faster, better  and uniform as indicated in the Figure 2, it was chosen as the most satisfactory formation and further studies were carried out on it. 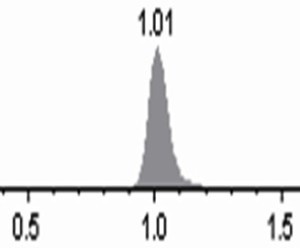 FIGURE 3: A REPRESENTATIVE LC-MS/MS CHROMATOGRAM OF GLIMEPIRIDE (200NG/ML) IN PLASMA

The pharmacokinetic parameters of the FDF formulations F4 containing  plain drug was compared with the formulation F5 containing drug-HPβCD complex as indicated in the Table 3 and Figure  4.

Even though the AUC0-24 and AUC0-∞ values between both the formulations were found to be statistically insignificant (P = 0.7704 and P = 0.8352 respectively), there was a significant difference in the Cmax and tmax values (P = 0.0307 and P = 0.03 respectively).  The peak levels of the drug in plasma was significantly higher and rapid from formulation F5 than formulation F4, which could be attributed to the increase in the solubility and dissolution rate of glimepiride upon complexation with HPβCD 20. 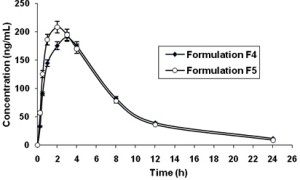 CONCLUSION: It can therefore be concluded that the standardized formulation F-5, in which the drug is present in its most soluble form, improved the physico-chemical-pharmacokinetic parameter requirements of a oral FDF dosage form of glimepiride, which is suitable for improving patient compliance for better management of the disease.

ACKNOWLEDGEMENT: The main author gratefully thank Andhra Pradesh Council of Science and Technology for providing partial financial grant for carrying out this work.