ABSTRACT: The aim of the present study was the formulation, development, and optimization of controlled porosity osmotic pump tablets of Tramadol hydrochloride. Cellulose acetate was used as the semi-permeable membrane. The porous osmotic pump contains pore-forming water-soluble additive (PEG-8000) in the coating membrane, which after coming in contact with water, dissolves, resulting in an in-situ formation of microporous structure. The dosage regimen of Tramadol hydrochloride is a 50-mg tablet at every 6 h. The plasma half-life ranges from 5.5 to 6 h. Hence, Tramadol hydrochloride was chosen as a model drug with an aim to develop a controlled release system for 24 h. The effect of different formulation variables, namely ratio of drug to osmogent, membrane weight gain, and concentration of pore former on the in-vitro release, was studied using 23 factorial design. The effect of pH and agitation on drug release was also studied. Drug-excipients compatibility was studied by Differential Scanning Calorimetry (DSC). The microporous structure of the coating membrane of optimized formulation was determined by Scanning Electron Microscope (SEM). The optimized formulation was subjected to stability study for one month period. It was found that drug release rate increased with the amount of osmogent because of increased water uptake and hence increased driving force for drug release. Drug release was inversely proportional to membrane weight gain: however, it is directly related to the concentration of pore former in the membrane. Optimized formulation was found to deliver above 98% of drug (Tramadol hydrochloride) at a zero-order rate for 24 h.

INTRODUCTION: Aim of the present research work is to develop controlled porosity osmotic tablets of Tramadol hydrochloride that deliver a drug at zero-order for 20-24 h and to be taken once-a-day. Tramadol hydrochloride is a µ-opoid receptor agonist and serotonin-norepinephrine reuptake inhibitor (SNRI) used in the clinical treatment of moderate to moderately severe pain 1.

Tramadol hydrochloride is a “Class-I” drug according to Biopharmaceutics Classification System (BCS), possessing both high solubility and high permeability absorption characteristics. Tramadol hydrochloride is rapidly and completely absorbed from the gastrointestinal tract. Peak plasma concentrations are reached 2 hours after oral dosing, and its elimination half-life range from 5.5 to 6 h 2.

Tramadol hydrochloride has a short elimination half-life and rapidly absorbed in the gastrointestinal tract. If it is formulated by conventional tablets, it will require multiple daily administrations (3-4 times daily), which ultimately results into inconveniency to the patients and the possibility of reduced compliance with prescribed therapy. Also fluctuation in plasma drug concentration leads to exaggerated side effects, these limitations can be minimized by adopting extended-release formulation. The majority of the system is matrix-based, and their drug-release mechanism is based on drug diffusion through the matrix system. The diffusion is altered by pH of medium, the presence of food, and the body’s physiological factors, all these factors can cause difficulty in controlling the drug release rate. Unlike matrix systems, osmotic systems use principle of osmosis as a driving force to release the drug from the system, and the drug release rate is unaffected by the body’s pH and other physiological factors 3. Recently, Osmotic tablets have been developed in which the pores are formed by the incorporation of a leachable component in the coating. Once the tablet comes in contact with the aqueous environment, the water-soluble component dissolves, and pore formation occurs. Subsequently, water diffuses into the core through the microporous membrane, setting up an osmotic gradient and thereby controlling the release of a drug. The release rate from CPOP systems depends on the coating thickness, level of leachable components in the coating, the solubility of the drug in the tablet core, and the osmotic pressure difference across the membrane but is independent of the pH and agitation of the release media means the body’s physiological factors 4. Controlled porosity osmotic pump tablets of Tramadol hydrochloride will be developed, and it will be evaluated for in-vitro drug release characteristics, the effect of pH, the effect of agitation on in-vitro drug release and a short- term stability study will be carried out on optimized formulation.

Preparation of Tablet Core: The batches were prepared by direct compression technique. The ingredients were individually passed through 40# mesh sieve and mixed for 15 min in mortar and pestle as per the formula. The blend was again passed through 40# mesh sieve and lubricated with Magnesium stearate and Talc in a glass bottle for 2 min. The blend was compressed into tablets using a tablet punching machine.

Angle of Repose: The angle of repose of tablet blends was determined by the funnel method

Where h and r are the height and radius of the powder cone, respectively.

Bulk and Tapped Density: An accurately weighed quantity of the blend (W), was carefully poured into the graduated cylinder, and the volume (V0) was measured. The cylinder was tapped for about 100, and bulk density and tapped density were calculated.

Carr’s Index: The Compressibility Index of the powder blend was determined by Carr’s compressibility index. It is a simple test to evaluate the Bulk Density and Tapped Density of a powder and the rate at which it packed down. The formula for Carr’s Index is as below

Hausner’s Ratio: It is a number that is correlated to the flowability of a powder or granular material.

Friability: Friability was evaluated as the percentage weight loss of 20 tablets tumbled in a friabilator (Electrolab, Model EF2, India) for 4 min at 25 rpm. The tablets were then de-dusted, and the loss in weight caused by fracture or abrasion was recorded as the percentage friability.

In-vitro Dissolution Profile of Tramadol Hydrochloride Core Tablets: The Tramadol hydrochloride release study was conducted using USP Type-I (Basket apparatus) at 37 °C ± 0.5 °C in 900 ml of dissolution medium with a speed of 50 rpm. 10 ml sample was withdrawn after predetermined time intervals and replaced by an equal volume of dissolution media. The samples were filtered through a 0.45 µm membrane filter. Tramadol hydrochloride content was measured using a spectrophotometer at a wavelength of 271 nm. 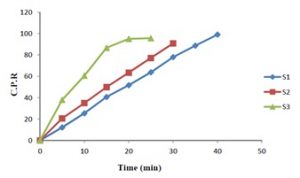 Batches S1 to S3 having appropriate flowability, compressibility, hardness, and friability. From S1 to S3, with an increasing amount of osmogent, the release rate was accelerated. All three batches have acceptable in-vitro dissolution requirements. So, Batches S1 to S3 was selected for further studies. Because it showed acceptable parameters in terms of flowability, compressibility, friability, and in vitro dissolution requirement.

In-vitro Dissolution Profile of Tramadol Hydrochloride Tablets: The Tramadol hydro-chloride release study was conducted using USP Type-I (Basket apparatus) at 37 °C ± 0.5 °C in 900 ml of dissolution medium with a speed of 50 rpm. 10 ml sample was withdrawn after predetermined time intervals and replaced by an equal volume of dissolution media. The samples were filtered through a 0.45 µm membrane filter. Tramadol hydrochloride content was measured using a spectrophotometer at a wavelength of 271 nm.

From dissolution profile of different batches SD1 to SD6, with increasing in % wt gain, t90% was decreased. So, the release rate is controlled by adjusting the thickness of the coating membrane. While with increase in concentration of osmogent in core tablet and concentration of pore former in coating solution, t90% was increased. So, release rate was accelerated, because generation of osmotic pressure in core tablet and formation of porous channels in the surface of the coating membrane, so, water could be imbibed into the membrane very quickly, accelerating drug release rate. 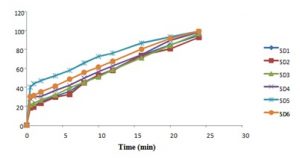 Comparison of Dissolution Profiles for Selection of Optimum Batch: The values of similarity factor (f2) for the batch SP4 showed a maximum f2 value of 86.87, as shown in Table 3. Hence, formulation batch SP4 was considered as the optimum batch.

Differential Scanning Calorimetry (DSC) Results of the Optimized Formulation (SP4): The DSC thermograms of Tramadol hydrochloride, core formulation, and coated formulation of optimized batch (SP4) are shown in Figures, and results are discussed. 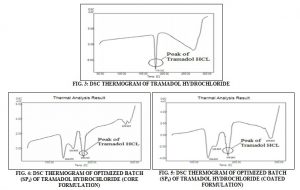 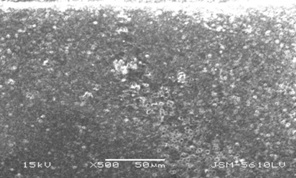 FIG. 7: SEM OF MEMBRANE STRUCTURE OF OPTIMIZED FORMULATION AFTER DISSOLUTION STUDIES (AFTER 24 HOURS)

Results of Accelerated Stability Study: In order to determine the change in in-vitro release profile on storage, a stability study of formulation SP4 was carried out at 40 °C in a humidity jar having 75% RH. Samples evaluated after one month showed no change in in-vitro drug release pattern, as shown in Table 4. The value of similarity factor was 87.04 in Table 5, indicating good similarity of dissolution profiles before and after stability studies.

CONCLUSION: The present study was aimed to formulate a controlled porosity osmotic pump tablet of Tramadol hydrochloride and to developed an extended-release formulation that delivered a drug for 24 h. In this developed formulation, pores were formed by the incorporation of a leachable component in the coating. Once the tablet comes in contact with the aqueous environment, the water-soluble component dissolves, and pore formation occurs. Subsequently, water diffuses into the core through the microporous membrane, setting up an osmotic gradient and thereby controlling the release of a drug. The release rate from these types of systems was dependent on the concentration of osmogent in the tablet core, which generates osmotic pressure difference across the membrane, level of leachable components in the coating (conc. of pore former), and coating thickness (% wt gain). Tramadol hydrochloride having high solubility and relatively short half-life (5.5-6 h) suggested its suitability for an extended formulation. Core tablets were prepared by direct compression technique using mannitol as osmogent and MCC as filler showed excellent flowability and good compressibility. Directly compressible core tablets showed acceptable friability and were evaluated for in vitro dissolution. The core tablets were coated by coating agent cellulose acetate (1% w/v) with PEG 8000 as water-soluble pore former and Triethyl citrate as a plasticizer. 23 factorial design was employed to optimize the controlled porosity osmotic tablets of Tramadol hydrochloride by selecting the ratio of drug to osmogent, amount of pore former, and membrane weight gain. An optimized batch (Batch SP4) was formulated using 1:0.5 drug to osmogent ratio, 30% w/w of pore former, and 8% weight gain. It gave desired results in terms of above 98% drug release in 24 h.

Kinetics of drug release of the optimized batch was studied, and it showed that the zero-order model was best fit for release of Tramadol hydrochloride from the prepared dosage form. The drug release rate from dosage form was independent of the pH of dissolution media and agitation speed. The optimized batch was studied at different dissolution media (pH 1.2 HCl and 6.8 phosphate buffer solution and 7.4 phosphate buffer) and different agitation speeds (50, 100, and 150 RPM).The compatibility of drug with excipients was studied by DSC. It shows that there was no chemical interaction between the drug and the excipients.

Results of Scanning Electron Microscopy (SEM) confirmed the formation of pores in the membrane after coming in contact with the aqueous environment. A stability study of the optimized batch was carried out at 40 °C in a humidity jar having 75% RH for one month. Samples evaluated after one month showed no change in the in-vitro drug release pattern. The value of the similarity factor indicating a good similarity of dissolution profiles before and after stability study. No fracture of coat from any tablet of the optimized batch was noticed during and after the stability study.

ACKNOWLEDGEMENT: The author and co-author thanks to Saraswati Institute of Pharmaceutical Sciences for providing the necessary facility to accomplish the work. We also humble thanks to our colleagues and non-teaching staff for their support during the work.