ABSTRACT: Dengue is the most rapidly spreading mosquito-borne viral disease in the world. Patients with dengue fever are treated symptomatically. There is no specific allopathic treatment for dengue fever. Traditional medicinal plants have been reported to be useful in the treatment of dengue fever. The development of new anti-dengue products from bioactive compounds is necessary to find an effective treatment for dengue. The present work aims at formulation development and evaluation of herbal IR tablets with faster disintegration and good mechanical strength for the treatment of Dengue. Tablets are stable solid dosage forms and are favorable for formulation derived from herbal extracts. The Carica papaya Linn and Boswellia serrata having anti-thrombocytopenic effect, anti-viral and antipyretic effect were used for the development of the nutraceutical tablet. Simple direct compression method was used for the formulation of an immediate release tablet. The effect of various superdisintegrant and diluents was explored. The compressed formulations were evaluated on various pre-compression and post-compression parameters. The tablets were coated with hydroxyl propyl methylcellulose (HPMC) 5 cps to prevent as the drug is hygroscopic. The tablets were subjected to weight variation, hardness, drug content uniformity, friability, wetting time, and In vitro drug release were studied. The results of all evaluation parameters of the nutraceutical tablet were within the acceptable limit. Pre-compression and post-compression studies of nutraceutical tablets show satisfactory results. The in-vitro drug release of Carica papaya Linn and Boswellia serrata from optimized nutraceutical formulation was found to be 96.61% and 97.22%. Significant results were obtained from the present study.

The oral route of drug administration is convenient due to its ease of administration, patient compliance, cost-effective and ease of manu-facturing of the drug that is administered orally, solid dosage forms are easy to handle and administer, of which tablets and capsule represent unit dosage form in which one usual dose of the drug has been accurately placed 1.

Tablets are stable solid dosage forms and are favorable for formulation derived from herbal extracts. The objective of the study is to formulate development and optimize herbal immediate tablet for Dengue. Dengue is an acute viral infection which is mosquito-borne disease that originated from the bite of Aedesa gyeti of the family Aedes. Dengue infection shows varied symptoms, is therefore not easily diagnosed, and can be lethal if left untreated. Dengue is globally regarded as most important mosquito-borne viral disease. Dengue fever or dengue hemorrhagic fever is a prevalent viral disease; approximately 2.5 billion people are affected by the dengue virus all over the world.

The dengue virus belongs to the genus Flavivirus in the Flaviviridae family, of which four antigenically distinct serotypes have been identified (DENV 1, 2, 3, and 4) of which DENV-2 is considered the most fatal. Despite its fatal consequences, at present, there is no specific antiviral treatment or vaccine for Dengue fever. The treatment which is generally suggested for the management of fever is maintaining the body fluid balance and electrolytes balance, as well as blood clotting parameters. There are no specific anti-viral drugs for dengue, and NSAID’s can’t be used for the treatment as they cause internal bleeding. The development of a vaccine for dengue is difficult as there are four closely related but antigenically distinct serotypes of the virus that can cause disease. Infection with a single DENV serotype produces antibody against the specific serotype. After the first interaction of the specific DENV with the host, the antibody only for that serotype is produced in the body of the host; therefore infection from other serotypes can lead to major illness 2, 3.

According to a World Health Organization (WHO), 80 % of the population in some Asian and African countries depends on traditional medicine as their primary health care due to economical and geographical constraints 4. The use of herbal drugs to treat various diseases has been proven to be effective and has fewer or no adverse effects. Medicinal plants have been reported to have various pharmacological activities that are used to treat both animals and humans. The present research work enlightens to screen medicinal plants which act on the symptoms of Dengue haemorrhagic fever (showing anti-pyretic and increase platelet count). The present research work enlightens to develop an immediate-release tablet containing medicinal plants having anti-thrombocytopenic effect, anti-viral and antipyretic effect by Carica papaya Linn leaf and Boswellia serrata 5, 6, 7, 8.

METHOD: The herbal tablet containing Carica papaya Linn leaf extract and Boswellia serrata extract were formulated by employing the direct compression method. The excipient used for the direct compression method was Croscarmellose sodium as superdisintegrant, MCC (Avicel PH 102) and DC lactose as a diluent, Talc as a glidant, and Magnesium stearate as a lubricant. Both the extracts and the excipients were individually sieved through 40 mesh. The excipients and the extracts except for lubricant and glidant were then mixed thoroughly for about 20 min to obtain a uniform blend. To the blend, the lubricant and glidant were mixed uniformly, and the blended powder was directly compressed into a 1g tablet with a caplet shaped punch using a single rotary punch machine.

Pre-Formulation Studies of the Tablet: Pre-formulation studies are important in the development of any formulation.

It helps in determining the physiochemical properties of the drug. The pre-formulation studies which were performed are drug-excipient compatibility studies, angle of repose, bulk density, tap density, Hausner’s ratio, and Carr’s index

Drug-excipient Compatibility Studies: Drug-Excipient interaction studies are the most important among the pre-formulation studies as these determine that there is no change in the chemical or physical behavior of the active when they are mixed with the excipient.

Tap Density: The powder blend was accurately weighed and filled in a graduated cylinder. Tap density is determined by placing the graduated cylinder containing a weighed quantity of formulation powder blend of the weighed quantity on a mechanical tapper apparatus which taps the cylinder or a fix no of times until the powder bed reached a minimum volume.

Hausner’s Ratio: It is an indirect index of ease of measuring of powder flow. Lower Hausner’s ratio (<1.25) indicates better flow properties than higher ones (>1.25).

Carr’s Index: The compressibility of the powder blend can be determined by using the data obtained from calculating bulk and tap density.

Appearance: The tablets were evaluated for their physical appearance, color, odor, and texture.

Friability: 20 tablets were weighed initially and placed in Roche Friabilator tester and was operated at 100 rotations revolutions. Tablets were unloaded and reweighed. The friability of weighed tablets should be less than 1%.

Disintegration Time: The disintegration test consists of 6 tubes held against a 10-mesh screen at the bottom of the basket rack assembly. Disintegration is tested by placing one tablet each in the tube, and the basket is positioned in a one-liter beaker of water maintained at 37 ºC, and the racked basket carries out an up and down movement using a motor device.

Assay for Drug Content: Drug content of all batches was determined by weighing 6 tablets and crushing the tablets in the motor pestle to obtain grinded fine powder. The fine powder was weighed to get 1000 mg and transferred to 100 ml in conical flask and volume was made up with 1.2 Ph buffer and was sonicated for 15 min in an ultra-sonicator. Solution was filtered and the filtrate wereanalyzed by UV spectrophotometric method, and drug contents were determined.

In-vitro Dissolution: The in-vitro dissolution study was performed in the USP apparatus type II using phosphate buffer of pH 1.2 at temperature 37 ºC. Aliquot equal to 5 ml of dissolution medium was withdrawn at a specific interval and replaced with fresh medium for maintaining sink condition. The sample was filtered and the absorbance of filtered solutions determined by UV spectroscopy. The dissolution rate was studied for all formulations.

Coating of Tablets: Carica papaya Linn and Boswellia serrata extracts are both hygroscopic in nature, and these tend to absorb moisture from the atmosphere when kept under high humidity. Therefore, the tablets were coated with 5% HPMC 5 cps polymer to prevent hygroscopicity. The optimized batch of the formulation trials was subjected to coating using Gansons Coater and re-evaluated for the physicochemical properties. Ethanol was used as a coating solvent. Different coating parameters were varied to obtain a good coating of tablets. The fixed parameters for the optimization of coating of tablets are as follows:

Pre-Formulation Studies of the Tablet: 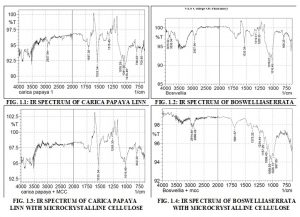 The physicochemical evaluation of the formulation trials are given in Table. 2. The hardness of tablets was found to be 6.6-7.2 kg/cm2. The weight variations of all the trials were found to be within limits (± 5% average weights of 20 tablets) as per IP. The friability of all the tablets was less than 1%. In- vitro drug release profiles of all the formulation trials are shown in Tables 3 and 4, graphically represented in Fig. 1 and 2.

The batch I: Choking of the gun was observed in affecting the spray rate. Batch II tablets were found to be sticky with an uneven coating at a slower pan speed. Batch III the edges of the tablet were damaged and the tablet were chipped due to higher pan speed. Batch IV some tablets were excessively coated and some were slightly coated, leading to variation in weight gain of the tablets. Batch V tablets were found to be sticky due to overwetting. Batch VI was found to optimum batch with uniform coating and optimum weight gain in tablets. Tablets of the optimum batch were subjected to evaluation, such as disintegration, dissolution, and assay. The weight variation of 20 tablets was evaluated and found to be within limits. The disintegration time of the coated tablets was found to be between 8 to 9 min. Dissolution studies were performed in triplicates, and the percent drug release at the end of 120 min was observed to be 97.22% Fig. 2.3. Assay of the coated tablets showed % drug content within limits, i.e., 99 to 105 %. 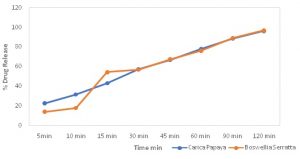 CONCLUSION: From the above discussion, it can be deduced that F9 was the optimum batch in the formulation trial with good physical strength, disintegration, and dissolution. Batch VI of the coating trials was found to have optimum parameters for coating for Carica papaya Lin and Boswellia serrata IR tablets.

ACKNOWLEDGEMENT: We express our sincere gratitude to Vivekananda Education Society’s College of Pharmacy for the support throughout the course of project work. We are grateful to Gansons Pvt. Ltd. for the technical and financial support.