ABSTRACT:Paracetamol was formulated as lozenges to provide slow release medicament for the management of fever and pain. There are many dosage forms like syrups, tablets, inhalers are available in the market but still there is a need for new dosage forms which acts effectively and locally. So the present investigation has been taken up to design, prepare and evaluated tablet lozenges to meet the need of improved bioavailability and hence avoid hepatic toxicity. The benefits of these prepared lozenges showed increase in bioavailability, reduction in gastric irritation by passing of 1st pass metabolism and increase in onset of action. The lozenges were prepared using sucrose as base; Sodium Carboxy Methyl Cellulose (NaCMC) and Methyl Cellulose(MC) are used as polymers. Eudragit is used as taste masking agent. All the formulations prepared were subjected to various physicochemical parameters like hardness, content uniformity, friability, weight variation etc. The prepared formulations have a hardness of 9-10 Kg/cm², not gritty, mouth feel freshness taste. Stability studies of selected formulations were also carried out at 30oC & 40°C for a period of six months. Some selected formulations were tested for drug excipients interactions subjecting to IR Spectral analysis. In-vitro drug dissolution studies showed least of 70.012% for PL3 and maximum of 90.648% for PL4 release of drug in 30 minutes. The moulded lozenges can provide an attractive alternative formulation in the alleviation of pain and fever.

INTRODUCTION: Lozenges are flavoured medicated dosage form intended to be sucked and held in mouth or pharynx.  They provide ease of administration for paediatric patients1. The drugs having a large dose can be easily administered formulating as lozenges. Patient compliance is high with buccal delivery due to the accessibility of the cheek and lack of invasive measures 2, 3. Most of the illness is associated with high body temperature, fever, head ache and body ache. It is very difficult to manage these complications in pediatrics patients 4, 5.This investigation deals with formulation of medicated sugar based lozenges containing the most common antipyretic and analgesic drug paracetamol.

Taste Masking of Paracetamol 6: The drug and the polymer Eudragit were weighed in the ratio 1:3 and were dissolved in small quantity of ethanol. The solution is heated at 80oC with constant stirring until the solvent evaporates completely. The dried product was scrapped with a spatula and triturated with pestle into a fine powder and passed through 200# sieve.

Preparation of Candy Lozenges 7, 8:Required quantity of sugar syrup was prepared mixing sugar and water. Dextrose was dissolved in small quantity of water and heated it to 110oC till dextrose dissolves completely forming as clear viscous syrup. Then the dextrose solution was poured into the sugar syrup and heated to 160oC till the colour changes to golden yellow.

The temperature was bought down to 90oC and drug, polymer and other ingredients were added. The solution was poured into the mould having 2.8cm diameter and 6.5mm thickness. The prepared tablets were stored wrapped in aluminium foil and stored in desiccators to prevent moisture uptake. The final weight of each lozenge is 5gms. The details of formulations are given in table 1.

Evaluation 9: All the formulations prepared were subjected to different evaluation parameter as subjected below.

Hardness:  It was determined by using Pfizer tablet hardness tester. The test was performed for three lozenges and standard deviation was calculated.

Diameter and Thickness: Diameter and thickness of the lozenges were measured using vernier callipers. The test was performed for three lozenges and standard deviation was calculated

Drug Content Uniformity: The content uniformity was tested by powdering one lozenge and dissolving the powder content in 60ml of methanol in a 200ml volumetric flask and make up the volume using phosphate buffer pH 6.8. From this 10ml was diluted with phosphate buffer pH 6.8 up to 100ml and absorbance was recorded at 249nm.

In-vitro Dissolution Studies: In-vitro release studies were carried using paddle type USP-II dissolution apparatus. 900ml of phosphate buffer pH6.8 at 37±0.5oC is taken as dissolution media. The rpm of the paddle was fixed at 100. Samples were withdrawn at an interval of 5min up to 30min and absorbance was recorded at 249nm.

Stability Studies: Stability studies for the lozenges were carried out at 40oC at 75%RH for a period of 90days. For every 15days the parameters like, drug content, weight variation, colour, hardness and moisture content were determined.

Thus, it can be concluded that all the formulations passed physicochemical evaluation. The details of physicochemical properties are given in table 2. The moisture content of all the formulation found to be below 2%. This is due to fewer amounts of water soluble polymer and less water uptake.  The FT-IR spectra of drug and excipients showed no shift in peaks. Hence it shows that there is no interaction between drug and polymers.

The in-vitro dissolution studies for the formulations were in range of 70.012% for PL3 to 90.648% for PL4. The details of the drug release are shown in figure 1. There is no change in physicochemical properties after performing stability studies. There is no relative change in the release kinetics of the formulation PL3 and PL4 after stability studies.

Figure 2 shows the comparison of the release profiles of PL3, PL4, PL3’ and PL4’. NaCMC is a rate controlling polymer. Hence the increase in concentration of NaCMC results in delay release of drug. MC is a hydrophilic polymer; hence it facilitates quick release of drug. But as the concentration crosses the optimum quantity it retards drug release. 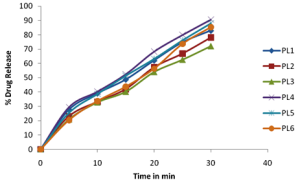 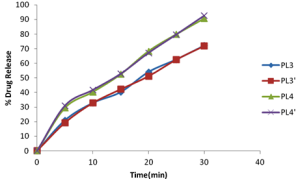 CONCLUSION: From the above investigation it is concluded that incorporating polymers like NaCMC and MC can be used to formulate effective medicated lozenges. This will offer better patient compliance and innovative dosage form. Increasing the concentration of polymers will lead to formulation of extended release formulation.