ABSTRACT: Lyophillized  floating  beads  have  been  investigated  as  a  possible  gastro-retentive  dosage  forms containing Ginger (Zingiber Officinalis) extract ( ZOE) and Nigella Sativa oil (NSO).  Emulsion gelation  method  was  used  in  preparation  of  ZOE-NSO  entrapped  floating  alginate  beads.  Drug content and floating properties of the beads were found to be satisfactory. The results revealed that lyophillized beads showed better floating behaviour (> 8 hrs). The formulations containing sodium alginate at  3% w/v concentration with 30 %w/v calcium chloride for cross-linking and 30 min for curing time presented with optimum drug release (8 hrs) and floating time (>24 hrs). The optimized formulation was subjected to storage at 40 and 50º C / relative humidity of 60% for a period of three months. In  vitro release  data  of  the  optimized  batch  presented  Higuchi-diffusion  and Korsmeyer  Peppas  models  with  Non-Fickian  release. The data proposed  that  the  prepared lyophilized NSO and   ZOE  hydrogel beads  delivered  their active ingredients  by    diffusion  and  erosion  mechanisms.

The single or multiple unit dosage form with effervescent base when come in contact with gastric fluid generates CO2 which gets entrapped into the swollen polymeric matrix and thus provides buoyancy to the dosage form 4.  Floating systems having low density have sufficient buoyancy to float over the gastric contents and remain in the stomach without getting affected by the gastric emptying rate. While the system floats over the gastric contents, the drug is released slowly at the desired rate and reduces fluctuation in plasma drug concentration. 5 Different approaches have been studied like chitosan based   lyophilized dosage form, use of sodium bicarbonate as an effervescent agent, inert oil entrapped alginate beads 6-8. The present study involves formulation of floating beads containing Zingiber officinale extract and Nigella sativa seed oil as a drug candidate, which remain in stomach or upper part of GIT for prolonged period of time, therefore maintaining the maximum drug release at desired site.

The ginger extract composes of oleoresin containing volatile oils of gingerols, shogoals, α-zingiberene, β-bisabolene, β-sesquiphellandrene and ar-curcumene. 9 Gingerols has been considered as a main substance responsible for the pungent smell of fresh ginger. There are some reports stating that the gingerols is responsible for many pharmacological effects of ginger.  Ginger has been used to treat diseases related to gastrointestinal tract such as flatulence, indigestion, nausea and vomiting. 10

The preparation of alginate hydrogel beads described here is based on the cross linking properties of this polymer with CaCl2. The calcium ion is believed to interact with five different oxygen atoms of two adjacent guluronate units in intra-chain binding. In addition it makes an ‘egg-box model’ through inter-chain binding of calcium to two or more alginate chain. The enclosed drug is released from the alginate matrix at a controlled rate. 12

Further lyophillization technique was used with an aim to give porosity to the beads so that the buoyancy of the formulations can be increased. As compared to unit dosage form multi particulate system would cover larger area and hence better localized effect of drug can be achieved. 13

Keeping the above facts in focus the study was aimed to formulate gastro-retentive lyophilized floating drug delivery system using ionotropic gelation of sodium alginate with CaCl2.

About 100 g of powdered Nigella sativa seeds were extracted with 600 ml n-hexane (ratio 12:1) using distillation unit. The temperature of the bath was kept at 100°C. Chilled water was circulated from the condenser. Total extraction time required was approximately 6 hours. The final extract was filtered using muslin cloth and then evaporated to remove the organic solvent (n-hexane). The remaining oily extract was further used for the formulation development.

The present formulation development is based on lyophillized calcium alginate beads containing NSO and ZOE to enhance the retention time of these drugs into the stomach.  The drug loaded calcium alginate beads were prepared by dissolving finely powdered sodium alginate in 100 ml double distilled water containing 1%w/v Tween 80 and 3% v/v NSO with slow agitation.  To this above mixture ZOE (1% w/v) was dispersed and stirred till a homogeneous dispersion was obtained.

The homogeneous dispersions were then added drop wise through nozzle (21 gauge) at a rate of 5 ml/min into a solution of calcium chloride with gentle agitation at room temperature. The resultant beads were allowed to remain in the calcium chloride solution for 2 h for complete curing and then filtered through thin muslin cloth. After washing twice with double distilled water resultant beads were subjected to lyophilisation process.  Total 3 cycles of 5 hours lyophillization were given after its 12 hours pre-freezing at -40 degree (LED-100A, Labnics Equipments, USA).

The mean diameter and shape of 50 drug loaded lyophillized beads was determined by optical microscopy. Average of triplicate batch is summarized in Table 1.

The floating ability was determined using modified USP dissolution test apparatus. Beads were introduced in the vessels and stirred using magnetic stirrer in 200 ml of 0.1N HCl maintained at 37 ±0.5 °C for 24 h. The floating ability of the beads was measured by visual observation. The preparation was considered to have buoyancy only when all beads floated on the test solution immediately or within a lag time of 2 min. The results are shown in Table 1.

The drug content in each formulation was determined by triturating and then soaking 50 mgs of lyophilized beads for 2 hours. The above sample was then sonicated for another 1 hours to rupture the calcium alginate matrix to ensure the complete drug release into the media (0.1N HCL). The resulting solution was filtered using sintered glass funnel and the percent drug content was obtained by the simultaneous analysis method developed at our laboratory using UV/Visible spectrophotometer (Shimatzu UV1800, Japan) at 256 nm for N. sativa seed oil and 282 nm for Zingiber officinale extract. The results are mentioned in Table 1.

The in vitro drug release study of formulations was carried out for F-2 and F-5 only as they exhibited good floating properties.

The in vitro dissolution study of the lyophilized hydrogel beads was carried out using USP dissolution test apparatus II (Basket Type) 17. Lyophillized beads (500 mg) sample was put into the basket and the basket was covered with thin muslin cloth. The basket was immersed into 900 ml 0.1N HCl filled into the dissolution bowl maintained at 37 ±0.5 °C and rotated at 50 RPM. An aliquot of 5 ml of the solution was withdrawn at predetermined time intervals of 1, 2, 3,4,5,6 hours and replaced by fresh dissolution medium. The withdrawn samples were analyzed for Zingiber officinale extract and N. sativa seed oil content spectrophotometrically at 282nm and 256 nm respectively. The percentage  drug  released was  plotted  against  time  to  determine  the  release  profile.  Samples were run in triplicate.

The  drug release data  obtained  from  the  in  vitro release  studies  were  fitted  to different  mathematical  equations  to  describe  the  kinetic  and  the mechanism of the drug release from the prepared beads. The kinetic models applied were; zero order, Higuchi and Korsmeyer Peppas models. The goodness of fit was evaluated based on coefficient (R2) values 18-21

The selected formulation F5 was subjected to storage at 40 and 50º C / relative humidity of 60% for a period of three months 22. At the end of the storage period,  the  formulation  was  tested  for  any  change  in  the  physical appearance,  drug  content,  in  vitro dissolution  studies  and  floating behaviour.  The dissolution profiles of both fresh and  stored  beads were compared.

The present investigation was aimed at developing lyophilized alginate hydrogel beads containing NSO and ZOE. This formulation was intended for gastric retention for the treatment of stomach ulcers, flatulence, nausea and other gastric disorders. The present formulation is a lyophilized multi particulate device, which has benefit of being porous and its ability to give better localized effect. These dual advantages make the formulation more suitable for drugs that needs localized as well as systemic effect in the stomach.

Nigella Sativa Oil was entrapped into the calcium alginate matrix. The beads containing ZOE and NSO were easily manufactured without any sophisticated equipment. Tween 80 was added to disperse the oil properly and to keep it dispersed during production of beads.

The initial screening for the selection of the percent sodium alginate revealed that the concentration as low as 1% w/v was enough to obtain good spherical gel beads.  The reason for requirement of lower level sodium alginate may be due to resin content of ZOE which imparts viscosity to the solution. Hence, for the present study, only 1%, 3% and 5 % w/v sodium alginate was used. It was observed that the lower viscosity of polymer solution (less than 1% sodium alginate in presence of ZOE) led to oblong, tailed beads, while higher than 5% w/v concentration of polymer was difficult to handle. All the formulations contained 3% v/v NSO and 1% w/v ZOE.

A total of six formulations were prepared to study the effect of concentration of sodium alginate (1%, 3% and 5%w/v) and calcium chloride (20% and 30% w/v). The curing time was kept constant (1hr). All the formulations prepared yielded spherical beads with the mean diameter ranges between 1.78 and 1.97 mm. For complete drying all the batches required three lyophillization cycles of 5 hr after overnight pre-freezing.

All the formulation beads were softer and porous in nature.  Batch F2 and F5 showed a good buoyancy and floating behavior (>24hrs). From these results it was concluded that sodium alginate level plays an important role in floatability and buoyancy of the formulations. The calcium chloride as a cross linking agent showed its effect on drug release. Batch F2 and F5 contains 3% w/v sodium alginate with 20% and 30 % w/v calcium chloride. In vitro dissolution study was carried out for batch F2 and F5 only.

In vitro drug release studies were carried out in 0.1 N HCl as a dissolution medium using USP Type I (Basket Type) apparatus.  It is evident from the figure 1 and 2 that ZOE was released faster as compared to NSO. This is due to water solubility of ZOE while NSO had to partitioned with an aqueous media which led to delayed release pattern for NSO.  Also, oil remained entrapped in to the polymer matrix of the beads. The drug has to first diffuse from the oil pockets  into  the  polymer  matrix   and then it transports out of the polymeric  matrix  into  the  dissolution  medium.  Batch F2 showed comparatively higher release of NSO at 6th hr.

To determine the drug release kinetics, the in vitro drug dissolution data were treated using PCP Disso Software, Pune, India.  Dissolution data were fitted to zero, Higuchi and Korsmeyer-Peppas models. The in vitro release of NSO and ZOE from the  lyophilized calcium alginate  beads  presented drug release coefficients  (R2) in favor  of  Higuchi-diffusion  kinetics  and  Korsmeyer  Peppas  model.  The values of diffusion exponent (n) was found to be 0.59 indicating non Fickian (anomalous) for batch F5. Based on  R-square values it  was  proposed  that  these formulations  delivered  their  active  ingredient  by  coupled  diffusion and erosion 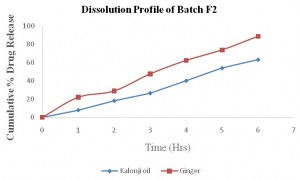 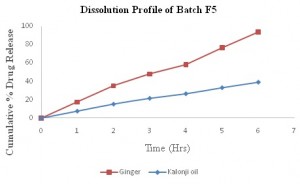 The Batch F5 was selected for stability studies as per the ICH guidelines. The stability study was carried out at 40°C and 50°C for 3 months at 60% RH in to an aluminium sealed container. The stored beads did not change any of the physical parameters as well as drug release pattern, floating time and floating lag time.

CONCLUSION: In conclusion, the lyophilized alginate beads were successfully prepared using ionic gelation technique to provide a gastroretentive drug delivery system for NSO and ZOE. The optimized beads were porous, spherical beads with narrow size distributions with good drug entrapment efficiencies. All the selected formulations variables showed their effect on floating behavior, physicotechnological parameters of beads and the release of NSO and ZOE.

The mechanism of drug release was observed to be coupled mechanism, i.e, diffusion and erosion. The lyophilized beads tend to be porous which led to diffusion type of mechanism for the drug release. The hydrophilic calcium matrix based multiparticulate system after coming in contact with biological fluids shows an intermediate erosion pattern during drug release. Hence, it can be concluded that the drugs like, Nigella Sativa and Ginger extract with their anti-ulcer and anti-flatulent activity can be delivered in multi-particulate system for better local as well as systemic absorption.