ABSTRACT: The aim of study is to develop microsponge based delayed release dosage form, technique used to manufacture microsponge was quasi emulsion diffusion technique. Eudragit L 100 and Eudragit S 100 polymer is used to incorporate lansoprazole in microsponge. Lansoprazole is acid labile drug hence release of lansoprazole was delayed from acid environment. Microsponge contains porous polymeric microspheres, typically 100 - 250 μm in diameter. Compatibility of the drug with adjuncts was studied by DSC. Production yield, loading efficiency, particle size analysis, surface morphology and in-vitro release studies were carried out. Optimized microsponge blended with other diluents and filled in capsules. Blend containing lansoprazole Microsponge were evaluated for SeDeM parameters to check its flow. The microsponge formulation F2 showed delayed release of lansoprazole in buffer stage pH 6.8 bypassing the acidic stage. The result reveals that developed microsponge are cost effective and can be used as a delivery system for acid labile drug lansoprazole to avoid its degradation in acidic media of the stomach. SeDeM technique can be employed for successive prediction powder blend performance.

Lansoprazole is proton pump inhibitor and binds to one common distinct site on the alpha subunit of the proton pump which decreases acid release by inhibiting H+, K(+)-adenosine triphosphatase, which is the final step in the secretion of acid 2.

Lansoprazole is acid labile drug which undergo changes when comes in contact with acidic media, this degradation lead to lower bio availability and low potency of lansopraozle 3. In order to prevent Lansoprazole degradation in initial acidic media of stomach we intended to develop delayed release dosage form, formulation likely to delay drug release in stomach bypassing acidic media which may result in prevention of drug degradation and maximum drug availability for absorption. By formulating dosage form using microsponges we are eliminating different coatings required to get delayed release action this may contribute to cost-effectiveness. Developed optimized microsponges were incorporated in different blend and all blends were treated with SeDeM technique. SeDeM expert system is predictive tool which predict flow performance of the powder or powder blend 4. SeDeM expert system may be coined as time saving as this technique may reduce no of trials.

Due to the ability of prediction for deficient part this technique may serve as economic and choice of technique compared to other time consuming conventional trial and error approach or software based prediction model. Marketed formulation of Lansoprazole delayed release capsule was procured and comparatively evaluated with developed formulation for various physical and chemical tests.

Confirmation and Characterization of API: Procured API was confirmed and characterized using IR, DSC and UV spectroscopy and other tests, values obtained were compared with reported literature value.

Infra-Red Spectrometry (IR): The IR absorbance spectrum of drug was recorded using IR 200 spectrometer (Thermo Electron Corporation) over a range of 500 to 4000 cm-1. The drug sample was directly placed in the sample cell in IR chamber and spectrum was recorded. The obtained graph was interpreted for different functional group.

Differential Scanning Colorimetry (DSC): The thermal behaviour of Lansoprazole was studied using a differential scanning calorimeter Shimadzu Japan (DSC 60) at a heating rate of 20 °C /min. The measurements were performed at a heating range of 50 ° - 225 °C under nitrogen atmospheres.

Solubility Study: Determination of solubility of API is an important aspect due to targeting delayed release dosage form also the process aims to involve diffusion method for microsponge preparation hence solubility study was performed in different physiological pH ranges as well as in organic solvents by taking 0.5 mg per ml and similar dilutions for all pH ranges 5.

Excipient Compatibility Study: Compatibility of API with the excipient present in formulation will lead to stable dosage form therefore in order to check the compatibility API and all excipient were mixed in 1:5 ratio together and blend of mixture was kept in stability chamber (HMG India) at condition 40 °C 75% RH, sample withdrawn and compatibility checked using DSC (Differential Scanning Colorimetry).

UV Spectrometry and Method Development: UV spectrometry was performed in order to confirm the received API and to develop analytical method. The ultraviolet absorption spectrum of Lansoprazole was obtained using Shimadzu 1700-PC UV visible spectrophotometer and 1 cm quartz cells, over a wavelength range of 400 to 200 nm in 0.1N HCl solution. The wavelength maxima lmax was analyzed by using UV Probe software. A stock solution was prepared by weighing 10 mg of Lansoprazole in 100 mL of volumetric flask and dissolved in Distilled Water to obtain a concentration 0.1 mg/mL or 100 µg/mL (stock). Method is successfully developed and validated as per ICH and can be utilized in quality control analysis of lansoprazole from formulation 6.

Development of Lansoprazole Microsponge: Microsponges were prepared using quasi emulsion solvent diffusion technique in which organic phase was prepared by adding drug lansoprazole and polymer Eudragit L 100 and LS 100 in methanol and ethyl acetate as per composition mentioned in Table 1. Aqueous phase was prepared by adding Poly Venyl Alcohol (PVA) in water under stirring to get some degree of elasticity in microsponges. Organic phase is added in aqueous phase slowly and stirring done for 1 h. Dispersion was filtered using Whatman filter paper equipped with vacuum containing assembly and dried at room temperature 7, 14.

Determination of Moisture Content (Loss on Drying): Inorganic solvents were used while preparing microsponges, hence it is important to measure any residue after drying. Dried microsponges were kept in halogen moisture analyzer at 100 °C for 20 min and checked for % moisture content present in dried product.

Loading Efficiency: The weighed amount of microsponge were dissolved in methanol and sonicated for 10 min. The drug content was measured spectrophotometrically at 281.8 nm for Lansoprazole, by preparing required dilutions and employing below formula equation 2.

Preparation of Ready to Fill Blend: Microsponges giving maximum yield and loading efficiency were selected for further formulation development. Microsponges (M1) was selected and weighed as per their actual weight containing one dose of lansoprazole and mixed with different ingredients shown in composition Table 2. Prepared blend further evaluated for its flow using SeDeM technique and filled in empty hard gelatin capsule shell size ‘0’.

Determination of Flow of Blend using SeDeM: To fill the blend in empty capsules it is important to have flow to prepared blend, flow of blend is predicted using 12 parameters of SeDeM Technique employed to determine the flow of blends. Formulation having higher radius value considered as optimized formulation to be consider for capsule filling 8, 9, 10 mention in Table 3.

Stability: The optimized batch was stored in stability chamber (HMG India) at 40 °C and 75 % RH for 3 month and observed for the, physical appearance, weight variation, disintegration, locking length, particle size, assay and dissolution at 1 month interval.

TABLE 3: PARAMETERS OF SeDeM EXPERT SYSTEM ALONG WITH LIMITS AND FACTORS

Preformulation Studies: Drug Lansoprazole was confirmed and compared with reported values with literature, the results of UV (lmax), melting point, DSC, solubility study and excipient compatibility study expressed in Table 4. From the table it can be concluded that chemical received is matches the characteristics with Lansoprazole drug and Lansoprazole is compatible with the excipients intended to use in the formulation. 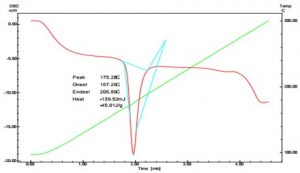 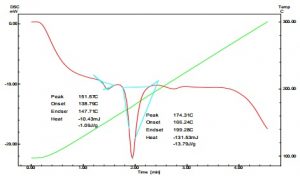 Development of Microsponges: Production yield was found in the range between 85 - 95%. These relatively low values may be due to the use of vacuum during filtration process. Loading efficiency was in the range of 85 - 98%. Moisture content was less than 1% in all formulation, while particle size of microsponges varies from 50 µ to 250 µ, all these values reported in table. 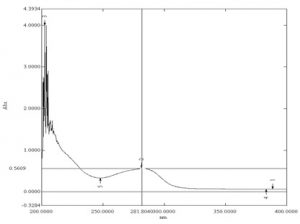 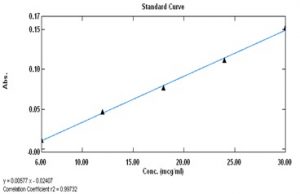 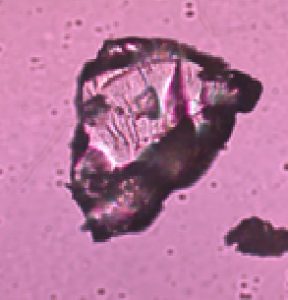 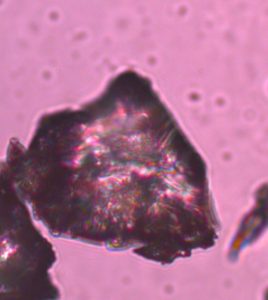 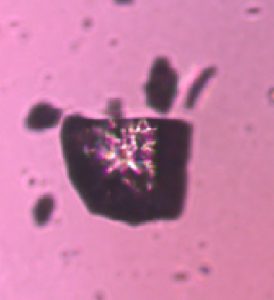 Surface Electron Microscopy (SEM): The optimized formulation M1 was analyzed by SEM for studying microsponge shape and surface structure Fig. 7. The microsponges were spherical in shape and possessed a slight rough surface. 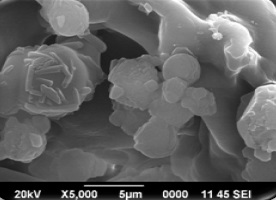 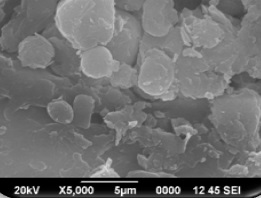 TABLE 6: RADIUS VALUES OF ALL 3 FORMULATION BLEND BY SEDEM TECHNIQUE

SeDeM Graphs of All Blends: 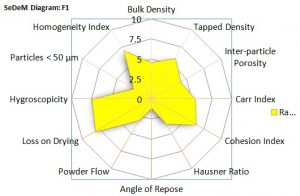 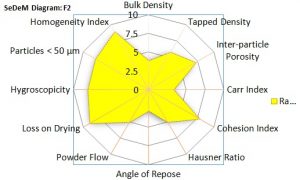 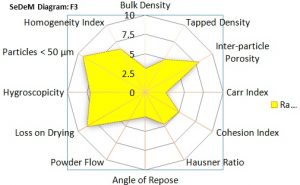 TABLE 7: IN PROCESS AND COMPARATIVE EVALUATION OF OPTIMIZED FORMULATION F1 WITH MARKETED PRODUCT

Determination of Assay and Dissolution: Result obtain after evaluation of lansoprazole capsules for assay and dissolution test was tabulated in Table 8.

TABLE 8: ASSAY AND DISSOLUTION VALUES OF OPTIMIZED FORMULATION AND COMPARISON WITH MARKETED PRODUCTS 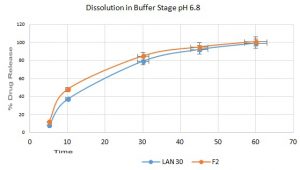 CONCLUSION: A stable microsponge based delayed release dosage form is developed for the treatment of stomach acidity, lansoprazole shows promising presence in all aspects like it solubility in intended pH range, compatibility with polymer and other ingredients, and its detectability in different spectroscopic methods. SeDeM expert system has predicted the flow of the blends and provided the best one from the list, in order to fill in the capsule shell.

This developed dosage form may be a cost effective as the numerous coatings involved in the process is reduced and prepared by simple diffusion of drug in polymer by means of microsponge structure. Production yield and Loading efficiency has encouraged for further development. Developed dosage form behaves similar to the marketed formulation in OGD and USP recommended dissolution media. It is recommended to have in-vitro in-vivo correlation using convolution and deconvolution technique for the optimized formulations.