The present study was undertaken to formulate directly compressible tablets to investigate the effect of different disintegrating agents such as maize starch and avicel PH101 on disintegration time, in vitro drug dissolution and their release properties. Tablets of paracetamol and the combination of paracetamol and diclofenac using maize starch and avicel PH 101 were prepared separately by direct compression method. The in vitro release of these formulations were studied at distilled water  for one hour using the USP paddle method as specified in united states pharmacopeias for immediate release preparation. Significant differences were found among the drug release profile from different tablet formulations using different disintegrants. Formula No. 3 containing the combination of paracetamol and diclofenac using maize starch showed the lowest hardness and disintegrating time i.e. 3.99 Kg/cm2 and 7.08 minutes respectively, and the highest drug release i.e. 75.50% compared to other formulations. The influence of different disintegrants was evaluated by measuring the disintegration time and hardness of the tablets. The effect of starch & avicel on the physical properties of direct compressed tablets was also studied. It was concluded that the immediate release tablets with proper hardness, disintegration time and with increased rate of dissolution can be prepared using starch & avicel

INTRODUCTION: In spite of the increased focus and interest generated in the area of controlled release and targeted drug delivery system in recent years, tablet dosage forms that are intended to be swallowed whole, disintegrate, and release their medicaments rapidly in the gastrointestinal tract still remain the formulation of choice from both a manufacturing as well as a patient acceptability point of view. Thus, a drug given in the form of a tablet must undergo dissolution before being absorbed and eventually transported into systemic circulation. For most of the tablet dosage forms, disintegration precedes drug dissolution 1. Dissolution of a drug from its dosage form is dependent on many factors, which include not only the physicochemical properties of the drug, but also the formulation of the dosage form and the process of manufacturing 2. In many cases it is possible to correlate dissolution rates with biological availability of the active ingredient. Hence, dissolution analysis of pharmaceutical solid dosage forms has emerged as a very important test of product quality as well as for differentiating among formulations of the same therapeutic agent 3. In the tablet formulations disintegrants are generally added to promote the breakup of the tablet into smaller fragments in an aqueous environment, thereby increasing the available surface area and promoting a more rapid release of the drug substance 4. This is especially important for immediate release products where rapid release of drug substance is required. The importance of tablet disintegration has been recognized as a first step towards achieving rapid bioavailability of the active ingredients 5.

The drug release profile is directly related with the disintegrating agents as the disintegrating agents act by different mechanisms in different tablets 5-9. Various types of disintegrants may be used in the manufacture of tablets, however, starch is the most widely employed and best established disintegrant. It is available in various grades and modified forms. Among them maize starch was proved to be the best one. Microcrystalline cellulose (Avicel) is also extensively used as a disintegrant. It has a moisture content of upto 3% and has a fast wicking rate for water. It has a tendency to develop static charges with increased moisture content and does not disintegrate as readily as the dried material 10.

Paracetamol and Diclofenac are also the most frequently used drugs throughout the world. Paracetamol has been in use as an analgesic for home medication for over 30 years and is accepted as a very effective treatment for the relief of pain and fever in adults and children. Paracetamol is also known as acetaminophen.  Paracetamol can be combined with decongestant ingredients to help relieve the symptoms of the common cold, influenza and sinusitis by relieving headache, general aches, nasal congestion and fever 11.

Diclofenac is in a group of drugs called nonsteroidal anti-inflammatory drugs (NSAIDs). It works by reducing hormones that cause inflammation and pain in the body. Diclofenac is used to treat mild to moderate pain, and helps to relieve symptoms of arthritis (osteoarthritis and rheumatoid arthritis), such as inflammation, swelling, stiffness, and joint pain 12 . Paracetamol is available as a tablet, capsule, liquid suspension, suppository, intravenous, and intramuscular form.

The common adult dose is 500 mg to 1000 mg while diclofenac is available as a tablet, capsule & liquid suspension form and the dose ranges from 50 mg to 150 mg.

Preparation of Immediate Release Tablets: For tablet preparation, method of dry mixing of the active ingredients with filler (lactose), disintegrants (starch, avicel), lubricant (magnesium stearate) and flow promoter (aerosil) followed by direct compression was followed. The active ingredient and other excipients were accurately weighed by Electronic balance (Metler Toledo, AX205, Switzerland) for ten tablets according to the formulations. Properly weighed the active ingredient, lactose, starch, magnesium stearate, and aerosil were then taken in a photo film container and blended in a laboratory designed small drum blender machine for about 10 minutes. Particular attention has been given to ensure thorough mixing and phase homogenization. The appropriate amounts of the mixture were accurately weighed in an electronic balance for the preparation of each tablet and finally compressed using a Perkin-Elmer laboratory hydraulic press (Single press tablet compression machine, China) equipped with an 11.4 mm flat faced punch and dies set. The compression force and compression time were 2 ton and 30 seconds respectively. Before compression, the surfaces of the die and punch were lubricated with magnesium stearate. The same procedure was adopted for the preparation of tablets in all the formulations. All the preparations were stored in airtight containers at room temperature for further study.

Characterization of Prepared Tablets: The average weight of tablets was measured by weighing 20 tablets individually with an analytical balance. The friability of tablets was measured in a friabilator (PTF 20 ER, Pharmatest, Germany) as the percentage of weight loss after the given number of rotations (100 rotations/4 min). For each formulation the friability was carried out by taking 20 tablets in triplicate and the mean value was reported along with standard deviation. The obtained tablets were evaluated for hardness and friability. Hardness was measured using a tablet Hardness Tester (TBH 310 MD, Erweka, Germany). Each hardness value taken is average of five measurements and the mean value and standard deviation were calculated.

Uniformity of Drug Content: 10 tablets from each formulation were weighed and powdered to test for the uniformity of drug content. Powdered tablets were extracted with 50 ml methanol. The solution was filtered carefully with a filter paper and diluted suitably to obtain the drug concentration 1 mg/100 ml. Finally it was assayed spectrophotometrically at 243 nm for paracetamol and 239 nm for diclofenac using UV- Spectrophotometer (UV- 1501PC SHIMADZU, Japan).

Dissolution studies: Dissolution test of tablets were carried out in a six station USP XXII type I apparatus (Electrolab, India) equilibrated  at 37±1oC and 50 rpm speed  using 900 ml distilled water (pH 5.5) as a medium 15-16. At every 10 minute interval 10 ml of fresh medium was replaced. Standard curves of paracetamol and diclofenac were prepared at the concentration of 10 µg/ml. To prepare standard solution, 1 mg of both paracetamol and diclofenac were measured in an analytical balance and placed in a 100 ml volumetric flask and added water to make the volume 100 ml.

Finally, the concentration of solution attained 10 µg/ml. Subsequent dilutions were made to attain the concentrations 1, 2, 4, 8 and 10 µg/ml for both paracetamol and diclofenac respectively. The dilutions were analyzed for absorbance at 243 nm for paracetamol and 239 nm for diclofenac using UV- Spectrophotometer to obtain the standard curve by plotting absorbance versus concentration. The amount of drug dissolved was expressed as percent release versus time curve at specified time period.

RESULTS AND DISCUSSION: In vitro test results of prepared tablets were evaluated. The average weight, hardness, friability and in vitro disintegration time are presented in Table 2. The weight of twenty tablets was taken triplicate and the results obtained were within mean ± 3%. Friability value of all formulations was satisfactory and less than 1%.

Hardness value was maintained between 3 to 5 kg/cm2 17 and the in vitro disintegration time of the prepared tablets complied with the BP specification. From the obtained data in Table 2 the percent of drug contents in the formulated tablets were found to be within the range of 99.30% to 99.47%.

This is probably due to the more hydrophilic nature of maize starch 21 compared to the insoluble avicel PH101 22. A good swelling ability of maize starch 21 may have an effect to promote faster disintegration with regard to the poor swelling tendency of avicel PH101 23. Disintegration time also appeared to be affected by the solubility of the active ingredient in water 25. Because of physical characteristics, diclofenac sodium has high aqueous solubility compared to paracetamol 25-28.

TABLE 2: DATA FOR THE EVALUATION OF FORMULATED TABLETS

The linear regression data obtained from the standard curve of the absorbance as a function of concentration for paracetamol at 243 nm and diclofenac sodium at 239 nm is depicted in Table 3. From the Table 3 it is observed that the value of R2 found have a good linearity in the concentration range used for both of the drugs and it was greater than 0.995.

The percent drug release of three formulations is presented in Figure 1. From the dissolution data it is observed that formulation 2 containing avicel PH101 have better release properties compared to the other two formulations containing maize starch. According to BP (2007) the acceptance criteria of dissolution testing for each unit of the conventional drug demonstrates that at least 75% of the drug should be released within 45 minutes. After 45 minutes formulation 3 showed 75.50% release whether 74.80% and 66.65% of drug were released for formulation 2 and formulation 1 respectively.  The decreased release of paracetamol may be due to the poor aqueous solubility causing poor bioavailability 29 compared to diclofenac which has better water solubility 30. 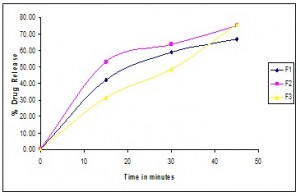 So the choice of a suitable type and an optimal amount of disintegrants is paramount for ensuring a high disintegration rate. It is reported in literature that, the disintegration time is not always in accordance with the dissolution rate since the latter may be affected by the other factors.

CONCLUSION: The physicochemical properties of the prepared tablets were within the specification of British Pharmacopoeia 2007. In the light of study of the disintegrants used in the three formulations, F2 deemed to be more promising followed by F3 in terms of giving better dissolution property. So the immediate release tablets containing the active ingredient of paracetamol, diclofenac sodium and the combination of paracetamol & diclofenac sodium respectively may be formulated successfully by direct compression method using starch and avicel as disintegrating agents.

ACKNOWLEDGEMENT: The author wishes to express humble regards to Kazi Rashidul Azam, Assistant Professor, Department of Pharmacy, Northern University, Bangladesh for providing laboratory facilities and technical support during the experimental work over there.