ABSTRACT: The present research work was planned to formulate poloxamer 407 based hydrogel formulations of metronidazole and the evaluation of various parameters like swelling behavior, drug PH stability, in-vitro and in-vivo drug release, and in-vitro cytotoxic activity. Two different concentrations of metronidazole hydrogel formulations were prepared using poloxamer 407 and were assessed by a validated HPLC method for drug content, pH stability, and in-vivo drug release. Further, in-vitro anticancer activity was evaluated using sulphorhodamine B (SRB) assay in SCC29 cell lines. Both the formulations F1 and f2 showed better pH stability at pH 3.5, 5.5 and 6.8. The formulation F1 was able to absorb about 152% of its weight of water within 80 min, whereas F2 absorbed 167.4% of its weight of water and remains constant over 100 min. In-vitro and in-vivo drug release pattern showed half-life at 6 h, AUC0−t 692 and 684ng h/ml, Cmax 1059 and 1142 ng/ml for F1 and F2 respectively. Hydrogel formulation F1 showed improved percentage control growth when compared to F2 hydrogel formulation and metronidazole alone.

INTRODUCTION: Metronidazole (MT) which is chemically 5 nitroimidazole derivatives with the molecular weight of 171.156, gm/mol and with a molecular formula C6H9N3O3. It is a nitroimidazole which is used for the treatment of vaginitis, amebiasis, giardiasis, trichomonas infections and several anaerobic bacterial infections 1. It shows antibacterial and protozoal activities, by converting itself active intermediate product in reduced form and which breaks DNA strands, thereby inhibiting DNA synthesis and bacterial cell growth 2.

Ploxomer 407 have been currently received major attention in the field of thermosensitive hydrogels. It is an amphiphilic synthetic copolymer which consisting of a hydrophobic poly (Oxypropylene) (POP) block between two hydrophilic poly (Oxyethylene) (POE) blocks 3-5. Because of its amphiphilic nature, these molecules can make self- assemble readily to form micelles base on the temperature and concentration.

These hydrogels have been characterized by their ability to carry a significant amount of drug. They are also, nontoxic biodegradable and stable, therefore suitable for uses in controlled release formulations 6. Extensive literature review on metronidazole revealed that, along with its antiprotozoal and antibacterial activities, the cytotoxic property of MT was also reported.

The cytotoxic activity of metronidazole (Flagyl) and imidazole (MISO) was conducted on hypoxic Chinese hamster ovary cells, and considerable cytotoxic activity was reported 7. In another reported article it was evaluated for its cytotoxic activity on DLD-1 colorectal cancer cell lines. They reported that the cell viability was decreased in all experimental groups when compared to control and found statistically significant 8. MT also proved its cytotoxic potential on breast cancer cell lines, Sadowski et al. reported the impact of cytotoxicity of MT on MCF-7 and MDA-MB-231 breast cancer cell lines 9. Based on the above-reported studies the present research work was programmed to prepare hydrogel formulations of MT using poloxamer 407. An extensive review of literature also revealed that till there were no hydrogel formulations of MT has been tested for its cytotoxic property, therefore in this present study we compared the cytotoxic property of MT and MT and its hydrogel formulations to investigate drug released from the prepared hydrogel show its cytotoxic property.

HPLC Analytical Method: The concentration of MT in hydrogel was determined using developed validated analytical method 10. Accurately weighted 10 mg standard metronidazole was dissolved in 65.0 ml of methanol and made up to 100 ml with Millipore water to obtain the final concentration of 100 µg/mL. From the standard stock solution of metronidazole (100 mcg/ml) different concentrations were prepared in the range of 0.003, 0.00625, 0.0125, 0.025, 0.05, 0.1, 0.3, 0.5, 1.0, 5.0, 10 µg/mL and injected in to HPLC system. Shimadzu LC-20AD HPLC equipped with SPD-20A UV/VIS detector, a Rheodyne (20 µl volume capacity) injector, and a Shimadzu LC Solution software was used. Chromatographic separation was performed on 25 cm RP-C18 (250 mm × 4.6 mm i.d.) with a particle size of 5 μm HPLC column. The mobile phase consisted of methanol, and millipore water (70:30, v/v) was used. The freshly prepared mobile phase was filtered through 0.22 µm membrane filter and degassed for 10 min before analysis. All samples were analyzed at a flow rate of 1.0 ml/min, and effluent was monitored at 365 nm. A 25 µl of sample was injected onto the Rheodyne and analyzed.

Study of Swelling Behavior of Hydrogels in Pseudo Extra Cellular Fluid (PECF): Prepared hydrogels (F1 and F2) were investigated of their swelling properties 12 in PECF solution. The PECF solution and simulated wound fluid which is consists of 0.22 g of KCl, 0.68 g of NaCl, 2.5 g of NaHCO3, and 0.35 g of NaH2PO4 in 100 ml of deionized water. The pH of PECF and ionic strength of the solution were 7.4 ± 0.2 and 0.48M respectively. The freshly prepared hydrogel formulations were left to swell in PECF solution at 25 °C. Hydrogels were weighed accurately and then soaked in PECF solution. 10 min later hydrogels were removed from solvent carefully, wiped by filter papers, reweighed, and placed in PECF solution. Until a constant weight was reached for each sample, this procedure was repeated several times. The percentage of swelling of hydrogels was calculated from the difference between the initial and the final weight of the sample divided by the initial weight of the sample.

Stability Study of MT and Hydrogel at Different pH: By using various pH (3.5, 5.5 and 6.8), stability study was conducted for the prepared hydrogels. 0.1 M hydrochloric acid, phosphate buffers were selected. 10 mg of MT was accurately weighted and MT loaded hydrogels were transferred to 2 ml centrifuge tube and 1 ml of each buffer was added to tubes containing hydrogels and incubated at 25° C for 24 h. HPLC method was adopted to quantify the drug content and the extent of drug degradation was evaluated.

In-vitro Release of MT from Hydrogels: Aliquots of 1 ml of MT loaded hydrogel formulations were centrifuged at 10000 × g. The pellet obtained after decanting the supernatant was diluted with 1 ml phosphate buffered saline (pH 7.4) and incubated at 37 °C under shaking equipment (50 rpm) for 3 h. A tube was selected and centrifuged at 10000 x g for 15 min at a various time interval. The released MT was determined using HPLC analytical method.

Determination of Bioavailability of MT loaded Hydrogel Formulations: To elicit any pharmacological activity the maximum amount of drug should reach systemic circulation. Due to that, MT alone and hydrogels have been administered orally to the wistar rats for the determination of the amount of MT reaching systemic circulation. Balaji Institute of Pharmaceutical Sciences, Narsampet, Warangal, has approved animal facility with CPCSEA registration no.1694/PO/Re/S/14/cpcsea and protocol was approved by the Institutional Animal Ethics Committee (IAEC). 5 mg of MT equivalent to MT and MT loaded hydrogels were taken and administered to male wistar rats (~280 g) orally, and blood samples were withdrawn from the tail vein under mild anesthesia at the intervals of 0.5, 1, 3, 6, 9, 12, 18 and 24 h respectively. EDTA tubes were used to transfer the blood samples, and the samples were subjected to protein precipitation, and quantity was estimated using the validated HPLC method.

Further, subculture was performed when a confluence of 90% was reached. Sulforhodamine B (SRB) assay method was utilized for the in-vitro cytotoxicity of metronidazole and prepared hydrogel formulations (F1and F2) 13. As per the standard protocol 24. Briefly, 5 × 103 cells/ well of SCC 29 cells were seeded in 96 well plates and incubated for next 24 h. Various concentrations (10-80 µg/mL) of metronidazole hydrogel formulations were prepared, and the plates were incubated for 48 and 72 h and fixed with cold trichloroacetic acid for 1 h at 4 ºC. The plates were washed 3 times with distilled water and air dried. The SRB dye (0.4%) was added in the plates and kept at room temperature for 30 min. 1% (v/v) glacial acetic acid was used to wash the plates for the removal of unbound SRB dye. The tris buffer (10 mM, pH 10.4) was added to each of the well and allowed to solubilize by keeping on a shaker. A microplate reader (Biotek Synergy HT) at 540 nm was used to measure the values.

HPLC Analysis of Metronidazole: Metronidazole was analyzed using Shimadzu LC-20AD HPLC equipped with SPD-20A UV/VIS detector, a Rheodyne (20 µl volume capacity) injector, and a Shimadzu LC Solution software was used., mobile phase Methanol : water (70:30 v/v), and the data was shown in Table 1. The calibration curves were prepared to determine the drug concentration. The relative standard deviation is less than 2% indicates the precision of the HPLC method. The correlation coefficient was found 0.999 and indicated the linear relationship between concentration and area. The chromatogram at 15 µg/Ml was shown in Fig. 1. 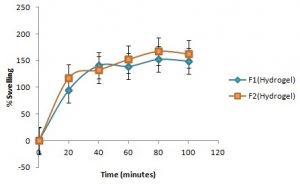 Swelling Behaviour of Hydrogels in PECF: The percentage swelling of metronidazole hydrogel formulations were calculated after pre-determination duration in PECF solution which was plotted as a function of time shown in Fig. 2. Swelling behavior of hydrogel formulations, F1 and F2 were checked in PECF solution as described earlier. The formulations were able to absorb about 152% of its weight of water (F1) within 80 min, whereas 167.4% of its weight of water (F2) and remains constant over 100 min for both the formulations. After that, the swollen film was broken into pieces. 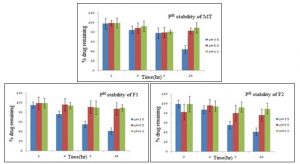 In-vivo Pharmacokinetic Study: It was conducted using wistar rats through oral administration of both the formulations. The drug content of F1 was found in the plasma samples were 280.4, 560.7, 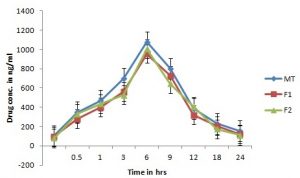 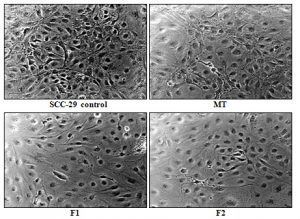 In-vitro Cytotoxicity Study: The cytotoxicity of MT and both the hydrogel formulations F1 and F2 were evaluated to investigate the effects on SCC-29 cells. Cell viability was determined using the SRB assay.  The supernatant component was taken out and washed with PBS and images were taken under 40X. The MT and hydrogel formulations treated cells are showed in Fig. 6. The cells applied with formulations F1 and F2 showed better anticancer activity over MT alone. Whereas, the formulation F1 have shown faintly induced cell death in SCC-29 cell lines. F1 was showed quite better cytotoxicity over other F2. The cells were showed blebbing and granules. The growth curve was shown in Fig. 7. 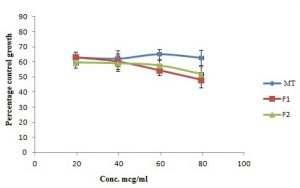 ACKNOWLEDGEMENT: The authors are thankful to the management of Vikas College of Pharmacy, Jangaoan, Telangana, for providing the necessary facilities to carry out the research work.