ABSTRACT: Objectives: The main objective was to find out a suitable and effective natural release retardant, which can be used in matrix tablet preparation along with synthetic excipients. Methods: Tamarind seed polysaccharides (TSP) were isolated from Tamarindus indica by hot extraction method followed by freeze-drying and yield was found to be 16.85%. Microbial studies confirmed that TSP doesn’t support microbial growth. Matrix tablet of Metformin HCl was prepared by using a wet granulation method with the help of TSP. Drug excipients compatibility was checked with the help of Fourier Transform Infrared Spectroscopy (FTIR) and Differential Scanning Calorimetry (DSC). At last, the release was compared with the marketed formulation. Results: The drug content of all the formulations ranged from 96.55% to 98.54%. Formulation F7 showed release up to 12 h. It was observed that as per increase in the polymer concentration, the release rate also increased. F6 formulation was found to be the optimized formulation. The F6 and marketed both the formulation followed the Higuchi model as n values came within the range of 0.5-1.00.

INTRODUCTION: Type - II diabetes is related to abnormal blood glucose, overweight, lipid disturbances, and blood pressure. For all this problem, oral hypoglycemic agents (OHAs) or insulin is often preferred. Biguanides particularly Metformin HCl enhance insulin-mediated glucose uptake and disposal in skeletal muscle and fat. It suppresses the hepatic gluconeogenesis and glucose output from the liver to lower blood glucose level 1. It is having an oral bioavailability of 50%-60% in the fasting condition with a duration of action in between 6-8 h.

The daily dose is 0.5 to 2.5 g with a plasma t1/2 of 1.5-3 h 2, 3. Matrix tablets are the oral solid dosage forms in which drug or active ingredient is homogeneously dispersed throughout the hydrophobic or hydrophilic matrices which act as release rate retardant. Furthermore, Metformin HCl presents formulation challenges due to its inherently poor compressibility, high dose, and high water solubility (> 300 mg/ml at 25 ºC).

It belongs to class III of Biopharmaceutical Classification System (BCS) having high water solubility and low permeability. For drugs that are highly water-soluble, both hydrophobic and hydrophilic matrices used for oral drug delivery system 4. Polymers, which have high molecular mass each molecule of which consist of a very large number of single structural units joined together regularly. Natural polymers occur in nature and can be extracted.

Isolation of Tamarind Seed Polysaccharides: Seeds of Tamarindus indica was collected and dried in sunlight. After that, seeds were crushed into powder and boiled with water at 45 °C to extract the polysaccharides. After boiling for 12 h, the supernatant liquids were collected and stored in a cool place. After the liquids become cooled acetone was added and freeze at -40 °C. Freeze materials then lyophilized to extract out the Tamarind seed polysaccharides 6.

Phytochemical Examination: Preliminary tests were performed to confirm the presence of polysaccharide by ruthenium red test and Molisch’s test 7.

Composition of Polysaccharides: Considering glucose as standard, the total sugar content was estimated by the phenol-sulfuric acid analysis. Tests like Molisch tests, Fehling’s test, and the iodine test was performed to determine the total carbohydrate content. UV- visible spectra and Barfoed test were undergone to determine the protein presence 8.

Solubility Studies: The polysaccharides obtain from Tamarindus indica was evaluated for solubility in water, acetone, methanol, and ether as per Indian Pharmacopoeia specification.

Determination of Melting Point: Melting point was determined by a capillary tube in melting point apparatus.

Loss on Drying: LOD was carried out as per the method mentioned in Indian Pharmacopoeia 9.

pH of 1% Solution: The pH of the 1% TSP solution was measured using a digital pH meter.

Moisture Content: The moisture content of the powder was carried out by thermos gravimetric method using IR moisture balance.

Viscosity of 1% Solution: The viscosity of 1% solution was determined by Brookfield viscometer (LVDV-E) (Brookfield Engineering Labs, Stoughton- USA) using Spindle 62 at 0, 20, 40 and 60 rpm.

Determination of Swelling Index: This was done by taking 1.0 g quantity of in a 15 ml plastic centrifuge tubes, and the volume occupied was noted. Ten milliliters of distilled water was added to it, and the content was mixed on a vortex mixer (Lab-line Equipment, India) for 2 min. The mixture was allowed to stand for 10 min and immediately centrifuged at 1000 rpm on a bench centrifuge (Remi, India). The supernatant was carefully decanted, and the volume of sediment was measured. The swelling index was computed using the following equation.

Determination of Ash Value: 2 gm of polysaccharide (TSP) was weighed accurately in a previously ignited and tarred silica crucible. The material was then ignited by gradually increasing the heat to 500- 600 °C until it appeared white indicating the absence of carbon. It is then cooled in a desiccator, and total ash in mg per gm of air-dried material is calculated. To the crucible containing total ash, 25 ml of 2M HCl was added and boiled gently for 5 min, and then about 5 ml of hot water was added and transferred into the crucible. The insoluble matter was collected on an ashless filter paper. This was then washed with hot water until filtrate is neutral and the filter paper along with the insoluble matter was transferred into the crucible and ignited to constant weight. The residue was then allowed to cool and then weighed. The percentage of insoluble acid ash was calculated from the weight of the sample taken 11.

DSC Studies: It is used to analyses thermal stress on drug and their mixture. Individual sample and 1:1 w/w physical mixture of the drug were weighed, and almost 5 mg was taken in the DSC pan and scanned in the temperature range of 50 to 300 °C in a nitrogen environment. A heating rate of 10 °C per minute was used, and the thermograph was reviewed for evidence of any interaction 13.

Formulation of Matrix Tablets: Metformin HCl tablets were prepared by wet granulation technique. Sustained-release (SR) matrix tablets of Metformin HCl was prepared by using drug Metformin HCl, HPMC-K-100, PVP-K-30, microcrystalline cellulose, and tamarind seed polysaccharides. Tamarind seed polysaccharides were used as matrix-forming polymer, while microcrystalline cellulose was used as a filler to maintain the tablet weight. All ingredients were passed through a sieve #20, weighed and blended. The granules were compressed by a direct compression technique, using KBR (IR press), with the help of 10 mm flat punches.

Post-Compression Studies of the Prepared Formulations: Test for weight variation, hardness, friability, and thickness were determined for compressed tablets.

Zero-Order Kinetics: Zero-order as a cumulative amount of Percentage drug released vs. time.

Where KQ is the zero-order rate constant expressed in units of concentration/time and t is the time in h.

Where Co is the initial concentration of the drug, k is the first order constant, and t is the time.

Higuchi Model: Higuchi's model as a cumulative percentage of drug released vs. square root of time.

Where K is the constant reflecting the design variables of the system and t is the time in hours. Hence, the drug release rate is proportional to the reciprocal of the square root of time

Korsmeyer Peppas Equations: Korsmeyer-Peppas equation used to determine the mechanism of drug release from the polymer matrix of the tablet as Log cumulative percentage of drug released vs. log time, and the exponent n was calculated through the slope of the straight line.

Selection of Optimized Formulation: The concentration of natural polymer in matrix tablet was optimized by study the properties of tablet and in vitro release profile. The effect of polymer concentration on release properties of matrix tablet was determined using different drug: polymer ratio. All the tablet parameter was evaluated for each formulation, and mathematical kinetics model for release profile was compared. The formulation which provides best release pattern with better tablet parameter selected as an optimized tablet. 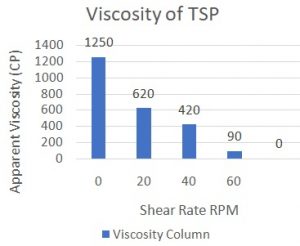 Differential Scanning Calorimetry: After mixing Metformin HCl and tamarind seed polysaccharides (TSP) onset shifted to 221.74 °C and peak is 228.72 °C, which is acceptable as shown in Fig. 2. 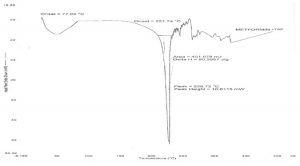 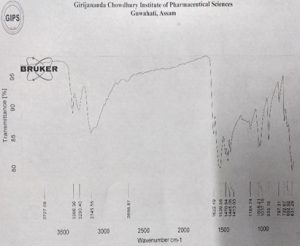 Evaluation of Tablets: Before preparing the batches of tablets, several pre-compression parameters were evaluated for the granules used in the formulation of tablets. Some of the pre-compression parameters evaluated were the angle of repose, bulk density, tapped density, Hausner’s ratio, and Carr’s index and mentioned in Table 4. The tablet formulations were evaluated for thickness, hardness, friability, weight variation, % of drug content, and shown in Table 5.

TABLE 4: PRE-COMPRESSION PARAMETERS OF ALL GRANULES 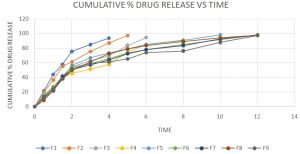 The in-vitro dissolution studies were carried out for all the formulations from F1-F9 in USP apparatus type II using dissolution mediums phosphate buffer pH 6.8. The release data were noted for 12 h for all the formulated batches. The result showed that with the varying concentration of polymer, the release of the drug showed a sustained pattern. Formulation F1 containing 10% of the polymer showed 4 h to release 93%, i.e. approximately 100% of the drug.

Similarly, the formulations F2, F3, F4, F5 got released at 5, 6, 8, 10 h and F6, F7, F8, F9 showed sustained release pattern till 12 h approximately 98%. Thus, with increase % of the polymer, the release time was seen to be extended together with a polymer. It was confirmed that by increasing the concentration of polymer the release of drug is extended because of slower erosion and increased viscosity which kept the gel network intact for 12 h with a higher proportion of polysaccharide and release profile shown in Fig. 4.

Optimization of Tablets: The R2 value and model constant of the corresponding mathematical model were given in Table 7. From the zero-order and First-order plot it can be easily understood that with an increasing percentage of polymer, the more retardation of drug release occurred as seen in F1 to F7. The best release was seen in the case of F6. But linearity was observed with Higuchi equation indicating that drug release by diffusion through swellable matrix. The n values of the formulations were found to be 0.9313.

Thus as the n value of F6 falls in the range of 0.5-1.0, it follows anomalous non-fickian drug diffusion occurs i.e. combination of both diffusion or swelling as well as erosion mechanism in case of Higuchi model. So F6 can be considered as optimized formulation.

TABLE 7: KINETIC PARAMETERS OF ALL FORMULATIONS

Stability Study: The stability study of optimized tablets (F6) was carried out according to ICH guidelines at 40°C ± 2°C/75 ± 5% RH for three months by storing the samples in stability chamber and result displayed in Table 8. 17

CONCLUSION: The research work was carried out successfully. The tablets were prepared by wet granulation technique using different drug-polymer ratios. Before compression, the granules were evaluated for pre-compression parameters, and then the tablets were evaluated for post-compression parameters. The results were found satisfactory for some of the formulations. Then in-vitro release studies were carried out for 12 h, and the release studies showed release approximately 100%. From which formulation F6 with polymer concentration, 30% was found to be optimized formulation as it showed better-sustained release of the drug. With the values obtained from drug release with time different release kinetics model equations were carried out and depicted in Table 7, it was found that the optimized formulation F6 and marketed formulation both followed Higuchi model of release, i.e. anomalous non-fickian drug diffusion occurs, i.e. combination of both diffusion or swelling as well as erosion mechanism as the values came within the range of 0.5-1.00.