INTRODUCTION: Controlled release drug delivery systems (CRDDS) provide drug release at predetermined and controlled rate. An important demand for the successful performance of oral CRDDS is that the drug should have good absorption throughout the gastrointestinal tract (GIT), preferably by passive diffusion, to ensure continuous absorption of the released drug. The pH dependent solubility and stability level of a drug plays an important role in its absorption.

A drug must be in a solubilized and stable form to successfully cross the biological membrane, and it will experience a pH range from 1 to 8 as it travels through the GIT 1. Drugs having site specific absorption are difficult to formulate as oral CRDDS because only the drug released in the area preceding and in close vicinity to the absorption window is available for absorption. After crossing the absorption window, the released drug goes to waste with negligible or no absorption 2.

Gastro retentive drug delivery systems are designed to be retained in the stomach for a prolonged time and release medicament to the upper part of the gastrointestinal tract. A controlled release drug delivery system with prolonged residence time in the stomach is of particular interest for drugs- acting locally in the stomach; having an absorption window in the stomach or in the upper part of small intestine; those unstable in the intestinal or colonic environments; or those having low solubility at high pH values. Floating drug delivery systems have a bulk density less than gastric fluids and so remain buoyant in the stomach without affecting the gastric emptying rate for a prolonged period of time. While the system is floating on the gastric contents, the drug is released slowly at the desired rate from the system. After release of drug, the residual system is emptied from the stomach. This results in an increased gastric retention time and control of the fluctuation in plasma drug concentration 3.

HPMC, when used alone, may exhibit an initial burst release for very soluble drugs. This behavior has been attributed to the rapid dissolution of the drug from the surface near the surface of the matrix, while the polymer undergoes hydration to form a protective gel layer. HPMC and Pullulan gum have been used for modulating drug release and to prevent the burst release of highly soluble 4. Venlafaxine hydrochloride, is a highly water soluble and structurally novel antidepressant for oral administration. It is a dual serotonin and norepinephrine reuptake inhibitor. It inhibits the serotonin transporter at 30 fold lower concentrations than norepinephrine transporter, respectively 5. It display differential effects on norepinephrine reuptake in healthy versus depressed patients. It is highly soluble in 0.1 N HCl and it decreases with increasing pH over the physiological range. The half-life of Venlafaxine hydrochloride is 5 ± 2 h, necessitating the administration, two or three times daily to maintain adequate plasma drug concentration 6.

The purpose of this study was to improve the release profile of Velnafexine HCl in the stomach in a controlled manner to improve the therapeutic benefit of selected drug. It is hypothesized the improved bioavailability might be due to increased gastric residence time and swelling and hydration nature of polymers used.

Preparation of Venlafaxine HCl Floating Tablets: The gastroretentive floating tablets of Venlafaxine HCl were prepared using swellable polymer, like Pullulan Gum and HPMC K100M with sodium bicarbonate (NaHCO3) and citric acid as gas generating agent, MCC as diluents / binder, magnesium stearate as lubricant and talc as glidant7. The drug and excipients were passed through sieve no. 44 prior to the preparation of the dosage form. The entire ingredients were weighed separately and mixed thoroughly for 10 min to ensure uniform mixing in geometrical ratio. The tablets were prepared by direct compression technique using single punch hand operated tablet punching machine. Tablets (250 mg) were prepared in a total of nine batches of formulation. The prepared tablets were then evaluated for the following post compression parameters 8, 9.

Pre-Compression Evaluation: Bulk Density: A known amount of sample was carefully introduced in a graduated cylinder. The cylinder was dropped onto a hard wooden surface three times from a height of 1 inch at two second intervals. The bulk density was then calculated by dividing the weight of sample in grams by final volume in cm10.

Tapped density =  Mass of powder   - Volume of powder after tapping

Carr’s index (% Compressibility): It indicated the ease with which a material can be induced to flow and expressed in percentage. It was calculated by the following formula:

Angle of Repose: Angle of repose has been defined as the maximum angle possible between the surface of pile of powder and horizontal plane. The angle of repose for the granules of each formulation was determined by the funnel method.

Where θ is the angle of repose, h is the height of cone and r is the radius of base

Hardness: The tablet hardness was determined by using Monsanto hardness tester and expressed in kg/cm2.

Thickness: It was determined by using digital Vernier caliper and expressed in mm.

Friability: Twenty tablets were weighed, rotated for 4 min at 25 rpm in Roche friability apparatus. Dedusted tablets were reweighed and the percentage of weight loss was calculated and expressed in percentage.

In-vitro Drug Release Study: It was performed by using USP type II apparatus at 100 rpm and in 900 ml SGF as dissolution media maintained at 37 ± 5ºC. One tablet (250 mg) equivalent to 37.5 mg of drug was placed in the basket. A sample (5 ml) of the solution was withdrawn from the dissolution apparatus at different time intervals which was replaced with fresh dissolution medium of same quantity to maintain sink condition. Absorbance of these solutions was measured at 223 nm using UV/Visible double beam spectrophotometer. Cumulative percentage of drug release was calculated 13, 14.

The first-order equation described the release from systems where the rate was concentration dependent. Where Q0 was the initial amount of the drug, time ‘t’ in minutes and k1 described the dissolution rate constant for first-order release kinetics. A plot of the logarithm of cumulative percent of drug remained against time would be linear if the drug obeyed first-order release kinetics. Values of release rate constant kt were obtained in each case from the slope of the log cumulative percent of drug remained versus time plots.

Values of release rate constant kH were obtained in each case from the slope of the cumulative percent of drug released versus square root of time plots.

Preparation Dosage Form for in vivo Studies: The optimized formulations which showed good in-vitro buoyancy and sustained release behavior were finally selected for in-vivo study (i.e. radiography). The drug in selected formulation was replaced with the same amount of barium sulphate while all other ingredients were kept constant. These formulations were analyzed for their physical properties. The analysis confirmed that the developed dosage form was similar to those containing drug 16.

In-vivo Studies: The experimental protocol to carry out in-vivo radiographic studies were reviewed and approved by the Institutional Animals Ethical Committee of NKBR College of Pharmacy and Research Centre, Meerut, (Registration no. 1420/PO/a/11/CPCSEA). The in-vivo radiographic studies were conducted in young and healthy male albino rabbits weighing 2.0 to 2.2 kg. The animals were kept under standard conditions (temperature 25 ± 2 ºC). Rabbits were kept for one week in animal house to acclimatize them and were fed a fixed standard diet. The 4 healthy male albino rabbits were used to monitor the in-vivo transit behavior of the prepared dosage form (i.e. floating microspheres and floating tablets). None of the animal had symptoms or past history of gastro-intestinal (GI) disease. In order to standardize the conditions of GI motility, the animals were fasted for 12 h prior to the commencement of each experiment.

In each experiment, the first radiographic image of the animal subjects was taken to ensure the absence of radio-opaque material in the GIT. One of each dosage form prepared for radiography was orally administered to rabbits with sufficient amount of water. During the study the rabbits were not allowed to eat, but water was available ad libitum.

For radiographic imaging, the legs of the rabbit were tied over a piece of plywood (20 × 20 inch), and location of the formulation in the stomach was monitored by keeping the subjects in front of X-ray machine (Allengers, Bharat Electricals, India, Model no. E 080743). The distance between the source of X-rays and the object was kept same during the imaging process. Gastric radiography was done at the intervals of 1h, 2h, 4h and 6h. In between the radiographic imaging, the animals were freed and allowed to move and carry out normal activities but were not allowed to take any food 17.

Validation of λmax: The samples containing different concentration of the drug were run and overlain spectra describing the reproducibility of the λmax (earlier scanned) was obtained that confirmed and validated the process.

FTIR Spectra of Venlafaxine HCl Pure Drug: The compatibility was studied with the spectra produced with drug + polymer combination comparing individual spectrum of each drug / polymer.

It can be seen that all the formulations had intercept values greater than 0.5 and less than 1, which confirms that the release mechanism of venlafaxine HCl from the floating tablets in acidic media (pH 1.2) was Fickian diffusion with swelling 19, 20. 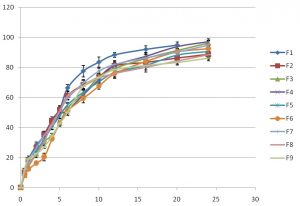 In-vivo Evaluation: In-vivo radiographic study done on BaSO4 loaded floating tablets showed that these tablets retained in the stomach for more than 6 h.

The position of tablet was found to be changed with time. It was also observed that the size of tablet was relatively bigger in radiographic image taken after three hour than that of taken after 1 h. It may be because of swelling of matrix in stomach fluid. 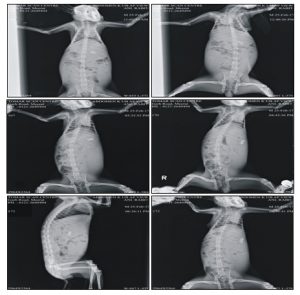 CONCLUSION: The present study was aimed to develop the floating tablets of Venlafaxine hydrochloride using HPMC K 100M and Pulllulan gum as carriers. Developed formulation gave satisfactory results for various evaluations for tablets like hardness, weight variation, floating lag time, and uniformity of content. In-vitro dissolution studies of the optimized formulation showed the continued release for 24 h, followed by the Fickian diffusion. An in-vivo study indicated long gastric residence time by the floating principle and was considered desirable for improving the bioavailability of the drug. Developed sustained release oral formulation would be a significant advantage for the patient and may result in fewer side effects due to reduction of the blood concentration fluctuations, especially in long-term therapy. Based on the results obtained from this study, it is hoped that further research with a variety of natural gum will lead to the development of more effective floating drug delivery systems. However, further clinical studies are needed to assess the utility of this system for patients suffering from depression.

CONFLICT OF INTEREST: The authors declared “no conflict of interest” in the manuscript.