ABSTRACT: The aim of this study was to prepare buffered tablets of acid labile drug, Pantoprazole sodium for oral administration using buffering agents to protect a drug from gastric fluid. Its mechanism of action was inhibition of H+/K+-adenosine triphosphate, an enzyme present in the gastric parietal cells. The tablets were prepared by wet granulation method. The formulations contain sodium carbonate, sodium bicarbonate as buffering agents and crospovidone as superdisintegrant. The formulation were prepared, optimized and evaluated by 32 factorial design. In this design independent variables were   sodium carbonate, sodium bicarbonate, cross povidone and dependent variables were pH and disintegration time. The tablets were evaluated for friability, hardness, disintegration, dissolution and drug content. The formulation F6 was selected by factorial design it was selected due to results as this formulation maintain neutral pH of stomach  and drug release simultaneously within 50 seconds after administration.

The drug like H2 blockers cimetidine, ranitidine and famotidine reduce the amount of acid produced by stomach. But Proton Pump Inhibitors (PPIs) are a group of drugs whose main action is pronounced and long-lasting reduction of gastric acid production.

The key action mechanism of the PPIs is inhibition of H+/K+-adenosine triphosphate, an enzyme present in the gastric parietal cells.

These drugs are metabolized in the parietal cells to active sulfonamide metabolites that inactivate the sulfhydryl group of the proton pump, thus reducing the hydrogen ion secretion 1, 2.

Pantoprazole is a lipophilic weak base with poor aqueous solubility at low pH. It is unstable in low pH solutions and undergoes rapid acid-catalyzed degradation, though it is relatively stable at neutral or high pH. Due to the pH sensitivity of Pantoprazole Sodium, effective drug delivery is problematic.

Most of the PPIs are formulated in an enteric-coated solid dosage form (either a delayed-release capsule or tablet) or as an intravenous solution. There are some problems associated with enteric-coated preparations as dissolution of the enteric coating is pH-dependent and gastric empting time. pH profile of the gastrointestinal tract in an individual is variable at different times and is dependent on numerous physiological factors (e.g., the fed or fasted state), variable dissolution times for the enteric coat and variable pharmacokinetic profiles of individuals may affects 3, 4, 5.

The acid-labile drugs for oral administration may also be protected from gastric acidity by neutralizing the pH of the gastric fluid. So the current frontier in PPI therapy is immediate-release tablet combined with buffering agents which prevent degradation of drug by neutralizing the pH of stomach before absorption and protect the drug from low pH. Such dosage forms are known as buffered tablet and such tablet is advantageously devoid of any enteric coating or delayed or sustained-release delivery 6, 7.

Preparation of buffered tablet of pantoprazole sodium: Buffered tablets were prepared by wet granulation technique using varying proportion of Ingredients.  The detail process is as follows:-

The compositions of the tablet formulations were listed in table 1.

Bulk density: LBD (Loose Bulk Density) and TBD (Tapped Bulk Density) were determined by 44 gm of powder from each formula, previously lightly  shaken to break any agglomerates formed, was  placed into a 100 ml measuring cylinder. After the initial volume was observed, the cylinder was allowed to fall under its own weight onto a hard surface from the height of 5 cm at 2 second intervals. The reading of tapping was continued until no further change in volume was noted using the following equation.

LBD and TBD were calculated:

LBD = Weight of the powder / volume of the packing.

TBD = Weight of the powder / Tapping volume of the packing.

Thickness measurement: It  is  carried  out  on  20  tablets  by  measuring  thickness  using Vernier’s calipers. Mean and standard deviation were determined.

Hardness determination: 20  tablets  were  taken  randomly  and  hardness  was  measured  using  Hardness  tester  (Electrolab  India  Ltd).  The mean hardness of 20 tablets of each formulation was determined.

Friability test: Friability was determined on 20 tablets. Tablet  samples  were  weighed  accurately  and  placed  in  friabilator  (Electrolab  India  Ltd).  After  100  rotations  (4 min  at  25  rpm)  loose  dust  was  removed  from  the  tablets.  Finally tablets were weighed.  The  loss  in  weight  indicates  the  ability  of  the  tablets  to  withstand  the  wear.  The percentage friability was determined by using following formula:

Disintegration test: Disintegration  time  was  determined  to  ensure  that  the  drug  substance  is  fully  available  for  dissolution  and absorption  from  the  gastrointestinal  tract. The  tablets  were  examined  using  the  USP-  XXIV  disintegration  apparatus  (Electrolab  India).  Six tablets were tested for each batch.

The dissolution was conducted for a total period of 30 mint using 500ml simulated gastric fluid pH 1.2 at 37.0 ± 0.5ºC. Samples were withdrawn from each vessels at 5,10,15,20,25,30 from starting the amount of drug present was determined according to the USP monograph for Pantoprazole sodium tablets using UV at 294nm.

Full Factorial Design: A 32randomized full factorial design was used in this study. In this design 2 factors were evaluated, each at 3 levels, and experimental trials were performed at all 9 possible combinations.

Drug-Excipient Interactions: The IR spectra of Formulation were compared with the standard spectrum of Pantoprazole sodium (Fig. 1). IR spectrum of Pantoprazole sodium was characterized by the absorption of -S=O group at 1037 cm−1 & - C-F group at 1105. In spectra of Formulation, band was same absorption pattern as that of pure drug. Mentioned evidences thus lead to the conclusion that changes were not seen as there was no physical interaction between the drug and polymers.

FIUGRE NO.1 IR SPECTRUM OF DRUG AND FORMULATION

Preparation of Tablets: Tablets were prepared by using 2 independent variables as different concentrations of polymers by using 32 factorial design. In the preparation of tablet, Sodium bicarbonate, sodium carbonate, Crosspovidone, mannitol cab-o-sil, PVPK -30 were used. In this formulation, Mannitol was used as a filler and PVPK-30 as a binder. Sodium bicarbonate, sodium carbonate were generally used in pharmaceutical formulations as a source of carbon dioxide in effervescent tablets and granules. But here they were used to produce or maintain an alkaline pH in a preparation. Crosspovidone is used in a variety of pharmaceutical formulations; it is primarily used in solid-dosage forms. In tableting, Crosspovidone solutions are used superdisintegrating agent in wet-granulation processes.

Post-compression characteristics of tablets: In the present study, Pantoprazole sodium   Buffered   tablets were prepared using buffering agent such as sodium bicarbonate and sodium carbonate. The  hardness  of  the  tablets  was  found  to  be  between  16 to 18  kg/cm2 and  friability was found to be below 1%  indicating good mechanical resistance as shown  in Table 5.

In vitro dissolution studies: In the present study, pH of F 6 batch was found to be optimum and disintegration time is 40 sec. In-vitro drug release studies were done for the selected formulations from each batch. The drug release was found to show maximum drug release in case of F6 with 99.99% in 30 minutes as shown in table 6 and figure 2, 3. 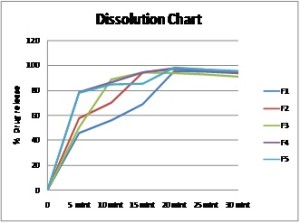 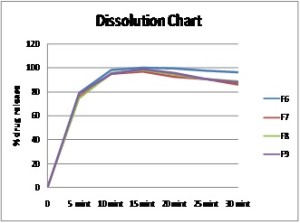 Factorial Design: Full factorial design was constructed to study the effect of the amount of Intra-granular Crosspovidone (X1) and the amount of Extra-granular Crosspovidone (X2) on the Disintegration of tablet. The dependent variables chosen were times required to disintegration of tablet within 40 seconds. A statistical model incorporating interactive and polynomial terms was utilized to evaluate the response where Y is the dependent variable, b0 is the arithmetic mean response of the 9 runs, and b0 is the estimated coefficient for the factor X1 The main effects (X1) and (X2) represent the average result of changing one factor at a time from its low to high value. The interaction terms (X1, X2) show how the response changes when 2 factors are changed simultaneously. The polynomial terms (X12) and (X22) are included to investigate nonlinearity. The statistical analysis of the factorial design batches was performed by multiple linear regression analysis using Microsoft Excel. The time of disintegration of tablets of each batch (F1 to F9) showed a wide variation the result is shown in figure 3. The fitted equations relating the response Disintegration time, shown in Equation1, and Equation 2, respectively;

The values of the correlation coefficient indicate a good fit. The polynomial equation can be used to draw conclusions after considering the magnitude of coefficient and the mathematical sign it carries, (i.e., positive or negative).

Figure 3 shows the plot of the amount of Intra-granular povidone (X1) and amount of extra granular povidone (X2) versus Disintegration time. The plot was drawn using Sigma Design Expert 8. The data demonstrate that both X1 and X2 affect the Disintegration time. It may also be concluded that the low level of X1 and the higher level of X2 favor the preparation to disintegration of tablets. The results in table indicate that batches F2, F3, F6, fulfill the above criteria. But batch F6 showed the best among all the batches. 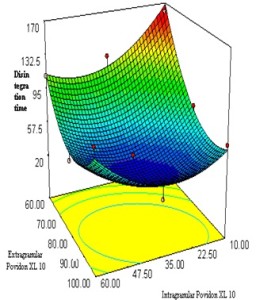 CONCLUSION: In the present work, an attempt was made to develop Buffered tablet of Pantoprazole sodium by wet granulation method using sodium carbonate, sodium bicarbonate as a buffering agent, Crosspovidone as Super-disintegrants and mannitol as a diluents. Nine   formulations (F1-F9) were prepared, the optimum concentration were identified based on the disintegration time and in vitro drug release results.

Based on the observation, it was concluded that formulation F6 had obtain the pH 7 and disintegrated within 40 second, optimized combination due to its fast in vitro disintegration time. The  results  demonstrated  the  effective  use  of buffered tablet Pantoprazole  tablets  and  as  an  ideal  drug  release  formulation for treatment of peptic ulcers and different acidic conditions .