Extracts of hawthorn (Crateagus sp.) have been indicated in the treatment of cardiovascular diseases, however, tablets produced from dry extract due to a multiple of factors such as inconsistent botanical ingredients, moisture content and hygroscopicity turn to be hard with prolong disintegration. Dissolution test is increasingly being employed for the assessment of solid herbal medicinal dosage form due to its ability to predict the bioavailability of active therapeutic agent from herbal products. The aim of this study was to formulate coated tablets containing dry extracts of hawthorn leafs and flowers and to develop and validate a reverse phase high performance liquid chromatography (RP-HPLC) method for assessing in vitro dissolution profile of hawthorn tablet. Comparative extraction procedure studies showed that percolating the plant material with ethanol and extracting with ethyl acetate produce extract with the highest amount of total flavonoids calculated either as rutin or hyperoside and the highest hyperoside content. Assessment of two disintegrating agents; Sodium starch glycolate (SSG) and cross-linked polyvinyl pyrrolidone (PVPP) showed that PVPP was a better agent for this formulation. Disintegration time also improved when distilled water was used as granulation fluid compared to alcoholic solutions. The disintegration time of coated tablets (CT), CT1 and CT2 were 8.83±0.41min and 9.33±0.52min respectively. The RP-HPLC method was validated as per ICH guidelines. The validation studies demonstrated that the proposed method is simple, selective, accurate and reliable and can be used for routine dissolution analyses of hawthorn tablets. The dissolution profile of the formulated tablets showed Q-values of 89.952% and 86.3765% for CT1 and CT2 respectively.

INTRODUCTION: Tablets of Hawthorn (Crataegus pinnatiﬁda Bge (Rosaceae)), extract is indicated in chest constrictions, stabbing pericardial pain, angina pectoris and palpitation 1. The use of hawthorn in cardiovascular diseases has been shown to be common in most cultures 2.

It has also been shown to have anti diabetic, antioxidant, anti-inflammatory and a mild to moderate sedative effect 3-7. These biological activities have been attributed to the phenolic component such as quercetin, isoquercitrin, chlorogenic acid, vitexin-4//-O-glucoside, vitexin-2//-O-rhamnoside, vitexin, rutin and hyperoside 8-10.

The rate of disintegration can be the rate-limiting step in the dissolution process and it’s particularly important for the dissolution of drugs from coated dosage forms 11. Slow or incomplete disintegrations reduce the bioavailability of active substances12. Dry herbal extract often increase tablet hardness and prolong disintegration time largely due to its hygroscopic nature and thus present a major problem in tablet formulation 13-16.

For quality control purposes, dissolution tests are frequently conducted for synthetic drugs but scarcely used for herbal products 17and this has been stated to be problematic 18-21. Certain conditions and manufacturing processes can limit drug release and affect its pharmacological activity 22. Absorption of drugs is controlled by their dissolution and variation in dissolution can lead to variation in their therapeutic or toxic effects 23, thus the need for evaluating the dissolution profile of herbal products.

The goal of the present study was to develop coated hawthorn tablet with suitable disintegrating time and to develop and validate a RP-HPLC method for assessing its dissolution.

All chemicals and reagents was of analytical grade.

The aqueous portion was then extracted twice with 20ml of ethyl acetate and ethyl acetate extract evaporated to dryness. The residue was then dissolved in 2ml of ethanol and used as the test solution. Using a polyamide plate and a mixture of ethanol, acetone and water in the ratio 7:5:6 as the mobile phase, 2ul of the samples was applied and developed. After development, the plate was dried in air and sprayed with aluminum chloride in ethanol TS. It was then dried under hot air and examined under UV light at 365nm.

The extract was concentrated to a density of 1.01 and diluted with an equal volume of water. It was then washed with 0.167 volume of petroleum ether (60-90oC). The petroleum ether layer was discarded and the aqueous layer extracted with 0.7 volume of ethyl acetate 1. The ethyl acetate extract was concentrate at 40oC in vacuo in a rotary evaporator and placed on a water bath to completely remove the solvent. It was further dried in a vacuum oven at for 5h at 50oC. A second batch of raw material was obtained and extracted by the CH.P method described above and coded DE5. The dried extracts were grinded using a mortar and pestle into fine powders and sieved through No. 80 sieve.

0.15g of DE1, DE2, DE3, DE4 and DE5 was added to 25ml of dilute ethanol TS in separate stopped conical flasks, ultrasonicated for 5min and allowed to stand for 3h after which it was filtered. 2ml of filtrates were then transferred into 25ml volumetric flasks and distilled water was added to volume to serve as test solutions. 2ml of test solutions were transferred into separate 25ml volumetric flask and 4ml of distilled water added to each. 1ml of 5% solution of Sodium nitrite was added and after 6min 1ml of 10% solution of Aluminum nitrite added. After another 6min, 10ml of Sodium hydroxide TS was added and distilled water added to make the volume.

Distilled water was added to 2ml of each test solution in a 25ml volumetric flask to serve as the corresponding blank. The absorbance was measure in triplicate at 500nm.

The percentage content of total flavonoids in each extract was then calculated.

The absorbance was measured after 30min at 410nm using a compensation liquid as blank.  The percentage content of total flavonoids calculated as hyperoside was determined from the expression:

Taking specific absorbance to be 405nm.

A = absorbance at 410nm; m = mass of the extract examined in grams.

The wet granules were dried at 40oC for 2 h in an oven. Agglomerates were eliminated by forcing the dried granules through No. 20 sieve. The disintegrating agent was added, mixed well and the lubricant added. The formulation was then compressed using a single punch tablet machine with a spherical punch of diameter 10mm.

Intermediate precision was evaluated by intraday and inter day analysis. For intraday analysis, 0.6, 0.8 and 1µg/ml working standard solutions were injected six times each. Their peak areas were recorded and their %RSD calculated. The inter day analysis was for five consecutive days by six determinations with the 0.6, 0.8 and the 1µg/ml working standard solutions. Their peak areas were recorded and %RSD calculated.

Excess hawthorn extract was placed in 10-ml glass tubes each containing 5ml of one of the above mentioned solutions. The glass tubes were sealed and agitated at 37oC for 48h using rotation of 150rpm in a thermostated shaking water bath. After equilibrating, the solutions were filter through 0.45µm micro porous filters, diluted appropriately and their hyperoside content determined in triplicate by HPLC.

RESULTS AND DISCUSSION: The plant material was successfully identified as that of hawthorn leafs and flowers by the TLC as shown in figure 1. The spots marked H represents the hyperoside spots and those marked R denotes the rutin spots with retention factors of 0.73 and 0.55 respectively.

The percentage moisture content of the extracts were within acceptable limits (Table 2). The standard curve of the rutin spectrometry showed linearity for the range of concentrations of rutin (9.168-55.008µg/ml) with regression coefficient, R2, of 0.9998. The line equations was y = 87.461 + 1.127. DE5 contained the highest amount of total flavonoids either as rutin or hyperoside but contained a lesser amount of hyperoside compared to DE4 as shown in Table 3. It is worth noting that, whiles the total flavonoids calculated as rutin fell below the stipulated value of not less than 80.0 percent in the CH.P for all the extract, the total flavonoids calculated as hyperoside for DE1, DE4, DE5 were above the Eur.P limits of 2.5 percent for aqueous and 6.0 percent for hydro alcoholic extracts. In 2008, the global market for traditional medicines was estimated at US$83 billion annually 28. To maximize international trade in traditional medicinal products and reduce trade limitations, methods of qualification and quantification need to be harmonized. 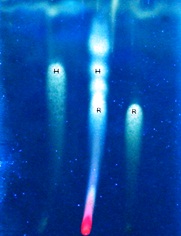 Two disintegrating agents; SSG and PVPP, with varying amounts were evaluated to access their effect on tablet disintegration. Binders were not used in this formulation as the extract exhibited a strong binding effect. Plant extracts have been show to act as strong binders 29. This is illustrated by the fact that tablets with lower weight containing the same amount of the extract either had a longer disintegrating time within the 30min experimental time or failed the test even though they contained the same percentage of disintegrating agents and filler. For example, T14, T19 and T20 contained 4 percent of PVPP. Whiles T19 failed to disintegrate within 30min, T20 disintegrated in 20.67min and T14 had a disintegrating time 5.67min. Also compare T12 and T17, T13 and T18. The binding effect of the extract seems to decline with increasing extract to MCC ratio thereby enhancing disintegration.

For 300mg of tablets containing DE2, DE3 or DE4, 7 percent PVPP resulted in disintegration times lower than those containing a higher or lower percentage of the same. However, tablets formulated with DE5 showed a different behavior; disintegration time improved with increasing percentage of PVPP. Again, tablets formulated with DE5 showed significant differences in disintegration times compared with those of DE4 though the extraction method and composition of formulations were the same. Though environmental conditions can bring about slight changes, this wide difference could be attributed to the fact that the physico-chemical properties of the extracts as well as their interaction with other components in the formulation are not exactly the same. It is therefore imperative to access the disintegration times of tablets when different extracts are used, especially when raw materials are not of the same batch.

The disintegration times for the coated tablets were 8.83±0.41 and 9.33±0.52 for CT1 and CT2 respectively. Their percentage weight gains after coating were 7% and 9% respectively.

The disintegration times for the various formulations are shown in table 4.

All the tablets showed acceptable friability when pressed at 100N.

Method Development and Validation: Method validation was done in accordance with the International Conference on Harmonization (ICH) guidelines 30. The graph was linear across the chosen range of concentrations with regression coefficient R2 of 0.9999. The regression line had a slope of 15.143, a y-intercept of -0.1222 and a residual sum of squares of 0.009418. The line equation was y = 15.143x - 0.1222.

Selectivity was demonstrated by injecting a standard hyperoside solution and recording the chromatogram, Figure 1. 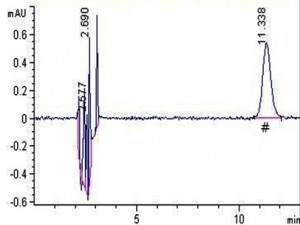 Changes in the flow rate, column temperature and THF manufacturer did not result in significant changes in the retention times and peak areas. The %RSDs were 0.383197, 0.666667 and 0.383197 which are within acceptable range and thus method can be said to be robust;

Medium Selection: Results from the saturation equilibrium solubility studies showed that the highest amount of hyperoside was releas in the 2% SDS solution. 2% SDS solution was therefore selected as medium for the dissolution studies.

Dissolution studies: Figure 2 shows a typical chromatogram of dissolution samples. The developed RP-HPLC method was able to detect and quantify the released of hyperoside. 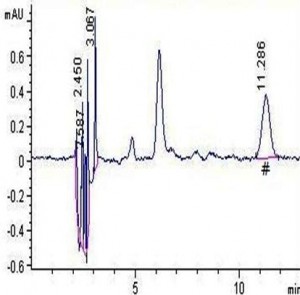 The results of the dissolution test are presented as percentage of hyperoside released at the preset times, Figure 3. 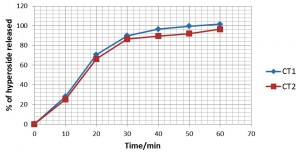 It was observed that, the amount of hyperoside released from CT1 was higher at all the set time than that released from CT2. The amount released was 4% higher for CT1 in 30 minutes and 5% higher after the run time; 60 minutes.

Although there is no pharmacopoeia specification for dissolution of this formulation, the Q-value was set at least 75% after 30 minutes. The Q-value for CT1 was found to be 89.952% and that for CT2 was 86.3765%, therefore both tablets meet the set specification.

CONCLUSION: Coated hawthorn extract tablets with acceptable disintegration time and dissolution has been produced. HPLC method for assessing the dissolution of herbal tablets has been recommended as against spectrophotometry since identifying the matrix used by manufacturers could prove impossible 26. A RP-HPLC method which is simple, selective, accurate and reliable has been developed for assessing the in vitro dissolution of hawthorn extract tablet. This method can be applied for the routine quality control analyses of hawthorn tablet.

ACKNOWLEDGEMENT: This study was financially supported by National Key Technology Research and Development Program of China (2012ZX09304007), and also supported by Program for Changjiang Scholars and Innovative Research Teams in Universities..