Among novel drug delivery systems, rate controlled oral drug delivery system forms an important area. Recent technological and scientific research has been devoted to the development of rate controlled drug delivery systems to overcome physiological adversities such as short gastric residence times and unpredictable gastric emptying times. Several approaches are currently utilized in the prolongation of the GRT, including floating drug delivery systems (FDDS), swelling and expanding systems, polymeric bioadhesive systems, high-density systems, modified-shape systems and other delayed gastric emptying devices. Floating Drug delivery system are designed to prolong the gastric residence time after oral administration, and controlling the release of drug especially useful for achieving controlled plasma level as well as improving bioavailability. Floating drug delivery systems are the systems which are retained in the stomach for a longer period of time. The main aim of the study was to design and evaluate nifedipine floating tablets. Hydroxypropyl methyl cellulose (HPMC K100M) was used as a polymer. This study proves that GFDDS of nifedipine can be designed using HPMC K100M as matrix polymer, which provides nearly zero order release kinetics and thus possible enhancement of oral bioavailability of the drug.

INTRODUCTION: CDDS are those convenient means of drug delivery systems which are meant to obtain a reduction of daily administration of drugs with fast absorption and elimination. Many controlled release systems have been developed for maintaining a therapeutically effective concentration of drug in systemic circulation for longer period of time as well as to reduce side effects 1.

Floating Drug Delivery Systems (FDDS): Floating drug delivery system or hydrodynamically balanced system (HBS) is a formulation of drug in gel forming hydrocolloid meant to remain buoyant on stomach contents. This not only prolongs GI residence time but also does so in an area of the GIT that would maximize drug reaching its absorption site.

In the formulation of the FDDS, polymers play an important role. They not only hold the formulation ingredients together but also give a floating property and sustained release. The most commonly used polymers are HPMC and sodium alginate.

HPMC comes in various grades like Methocel K4M, Methocel K50M, Methocel K100M, Methocel E4, Methocel E50, Methocel E100 etc 2. These excipients absorb a significant amount of water (more than 20% of their dry weight) while maintaining a distinct 3-dimensional structure. When a dosage form is immersed in a specific medium, hydration occurs, which leads to gel formation. The process of erosion causes the de-aggregation and the creation of new gel layers, affecting both the volume and the weight of the dosage form. This in turn causes the controlled drug release. It has been observed that only hydrophilic polymers are not sufficient for floating characteristics and better results are possible with use of some soluble or gas-evolving excipients 3.

Floating drug delivery systems have various advantages like sustained release, site specificity, absorption enhancement, maintenance of constant blood levels etc 4. The novel design of an oral controlled drug delivery system should be primarily aimed at achieving more predictable and increased bioavailability of drugs. But there are several physiological difficulties, which include restraining and localizing the drug delivery system within the regions of the gastrointestinal tract and the highly variable nature of gastric emptying process (a few minutes to 12 hours). This variability, in turn may lead to unpredictable bioavailability and the time to achieve peak plasma levels, since the majority of drugs are preferentially absorbed from the upper part of small intestine.

Furthermore, the relatively brief gastric emptying time in humans, which normally averages 2 to 3 hours through the major absorption zone (stomach or upper part of the intestine), can result in incomplete drug release from the drug delivery system leading to diminished efficacy of the administered dose. Therefore, restraining a drug delivery system in a specific region of the gastrointestinal tract offers numerous advantages, especially for drugs exhibiting an absorption window or for drugs with a stability problem. Overall, the intimate contact of the drug delivery system with the absorbing membrane has the potential to maximize drug absorption and may also influence the rate of drug absorption 5, 6.

These considerations have led to the development of oral controlled-release dosage forms possessing gastric retention capabilities.

Nifedipine is a calcium channel blocking agent used in the treatment of various cardiovascular diseases, long term treatment of hypertension 7 and angina pectoris 8. Earlier, short acting nifedipine was used sublingually in emergency management of severe hypertension. Later it was established that there is an increased risk of myocardial infarction or mortality in patient receiving short acting nifedipine for hypertensive emergencies 9, 10. The objective of present work is the formulation of floating Nifedipine matrix system using HPMC polymer.

Fabrication of Floating Tablets: Nifedipine, HPMC, Carbopol, and sodium bicarbonate were passed through sieve no. 80 separately. The drug was then mixed with the polymers and other ingredients in the weight proportion and compressed on an eight station tableting machine using flat-faced Punch (diameter 5 mm). Formulations are shown in Table 1.

Hardness Test: The crushing strength (Kg/cm²) of the tablets was determined by using Pfizer hardness tester.

Friability Test: This was determined by weighing 10 tablets after dusting, placing them in the friabilator and rotating the plastic cylinder vertically at 25 rpm for 4 min. After dusting, the total remaining weight of the tablets was recorded and the percent friability was calculated according to:

Uniformity of weight: The weight (mg) of each of 20 individual tablets was determined by dusting each tablet off and placing it in an electronic balance.

In vitro floating studies: Floating time was determined by using USP dissolution apparatus-II at 50 rpm using 900ml of 0.1N HCl and temperature was maintained at 37±0.5°C, throughout the study. The duration of floating (floating time) is the time the tablet floats in the dissolution medium (including floating lag time, which is the time required for the tablet to rise to the surface) is measured by visual observation.

Swelling Index: The individual tablets were weighted accurately and kept in 50 ml of water. Tablets were taken out carefully after 60 minutes, blotted with filter paper to remove the water present on the surface and weighed accurately. Percentage swelling (swelling index) was calculated by using the formula:

The samples were analyzed for drug release by measuring the absorbance at 238nm using UV-Visible spectrophotometer after suitable dilutions. The results of in vitro release profiles obtained for all the formulations were fitted into four models of data treatment as follows:

Evaluation of Floating Tablets: In the present study, hydrodynamically balanced systems of nifedipine were prepared by using HPMC at different drug to polymer ratios along with a gas generating agent, sodium bicarbonate.

The hardness of the prepared HBS of nifedipine was found to be in the range of 4.19 to 5.12 Kg/cm². The friability of all tablets was less than 1% i.e., in the range of 0.76 to 0.89%. The percentage deviation from the mean weights of all the batches of prepared HBS was found to be within the prescribed limits as per IP and as observed from the data given in table 2. The swelling index of tablets increases with an increase in the polymer content and the content of gas generating agent (NaHCO3), as can be seen from the data given in table 2.

Drug Release Kinetics: In vitro drug release data of all the HBS formulations was subjected to goodness of fit test by linear regression analysis according to zero order and first order kinetic equations, Higuchi’s and Korsmeyer-Peppas and Hixson-Crowell models to ascertain the mechanism of drug release. The results of linear regression analysis including regression coefficients are summarized in table 3 and plots shown in figures 2 to 6. From the above data, it can be seen that all the formulations have displayed first order release kinetics (R2 values in the range of 0.9845 to 0.9892). It is also evident that the drug release pattern follows Korsmeyer-Peppas model. 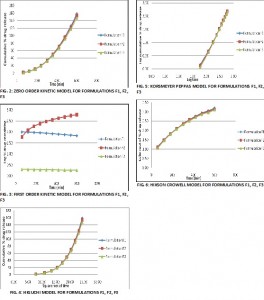 CONCLUSION: From the present study, the following conclusions can be drawn,