The aim of the present investigation was to develop a novel gastro retentive dosage form of Ranitidine hydrochloride (RHCl) to achieve prolong gastric retention, increase drug bioavailability and to modulate the release of RHCl in the stomach, by using various ratios of HPMC E-15, a low-density grade polymer and it was cheaper and easily available along with Carbopol 934, as gel former. Sodium bicarbonate and citric acid were added as Effervescent agent. The tablets were prepared by wet granulation technique as 12 different formulation batches F1 to F12 depend on variable polymer ratios by using single punch hand operating machine, were evaluated for physical characteristics viz. hardness, swelling index, thickness, and weight variation. Further, tablets were evaluated for in vitro buoyancy time and in vitro release characteristics for 12 hr. Tablet achieved sufficient buoyancy due to the CO2-gas formation and their entrapment by polymeric gel membrane. The increased amount of a gas forming agent did not affect time to float but increased the drug release from the floating tablets while increasing HPMC matrix content increased time to float and slightly retarded drug release. Formulation batch no. 8 was found to be the best formulation having maximum buoyancy 395 minute and a sustained drug release for 655 minutes. This study indicates that maximum buoyancy and sustained release of drug can be achieved using appropriate combination of gel forming agents and gas generating agents in the formulation of floating tablet. A higher proportion of gas generating agent to gel formatting agent found to be promising for achieving prolong gastric retention and sustained release. The floating tablet offers a simple and practical approach to achieve increased gastric residence time for the dosage form and sustained drug release.

INTRODUCTION: Gastroretentive dosage forms have potential for use as controlled-release drug delivery systems 1. The use of floating dosage forms (FDFs) is one method to achieve prolonged gastric residence times (GRTs), providing opportunity for both local and systemic drug action 1, they can be retained in the stomach and assist in improving the oral sustained delivery of drugs that have an absorption window in a particular region of the gastrointestinal tract 1. These systems help in continuously releasing the drug before it reaches the absorption window, thus ensuring optimal bioavailability 2.

Ranitidine HCL has short biological half-life of drug (~2.5-3 hours) and absorption window only in the initial part of the small intestine with 50% absolute bioavailability, thus why there is a strong need for development of their oral sustained release formulation. The conventional dose of 150 mg can inhibit gastric acid secretion up to 5 hours but not up to 10 hours. An alternative dose of 300 mg leads to plasma fluctuations; thus a sustained release dosage form of RHCl is desirable.

Objective: The objective of the present study was to develop floating tablet of Ranitidine hydrochloride (RHCl) to achieve prolong gastric retention, enhance drug bioavailability and to sustained the release of RHCl in the stomach, by using various ratios of HPMC E-15, a low-density grade polymer, it was cheaper and easily available along with Carbopol 934, as gel former and Sodium bicarbonate, citric acid as Effervescent agent.

Preparation of floating tablet: Ranitidine floating tablet were prepared by Wet-granulation method. RHCl (336 mg equivalent to 300 mg of ranitidine) was mixed with the specified quantities of HPMC E-15, sodium bicarbonate, Carbopol and citric acid by continues mixing in a Mortar pestle. After complete mixing in this mixer binder 2% w/v solution of PVP K-30 in isopropyl alcohol was added and stirred until IPA was evaporated to form a wet mass. Granules were obtained by passing this through the sieve no 16. Then granules were dried in hot air oven. This dried granule was again passed through the sieve no. 22. Then lubricant magnesium stearate (1% w/w) and purified talc (1% w/w) added and mixed with granule prior to compression. Then granules were compressed to form floating tablet. 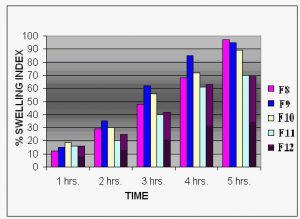 The result indicates that quantity of HPMC E-15 incorporated in formulation has significant effect on % swelling index. Formulation F-8 posses 95 % swelling index for achieving greater buoyancy this values are agreeable. 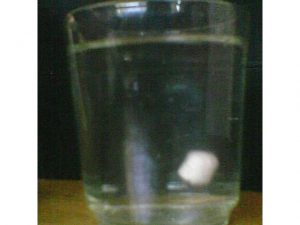 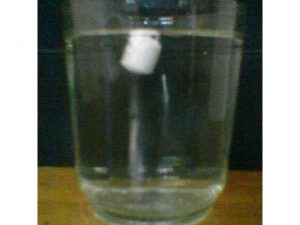 Formulation batches from F8-F12 showed good in vitro buoyancy but the best one is from formulation F-8, this provides total buoyancy of 655 min. The floating ability of floating tablet is increased by increasing the HPMC content. 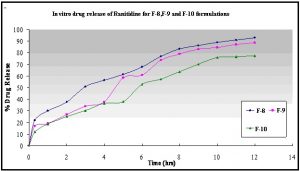 CONCLUSION: This work discusses the preparation of floating tablets of Ranitidine by using HPMC E-15 was exhibit combined excellent buoyant ability and sustained drug release pattern could possibly be advantageous in terms of enhanced pharmacokinetic profile and increased bioavailability. HPMC E-15, a low density grade polymer was found to be a better alternative to their higher density grade HPMC polymer because of their cost effectiveness as well as their good gel forming ability and for achieving in vitro buoyancy of nearly 11 hours sustained drug release profile satisfactorily.