The transition in diet has lead to an increase in lifestyle disorders and thereby increased dependency on wonder drugs. With increased drug discovery and marketing, there is a compelling trend towards large drug dosage. However, food is judged not only for its nutritive properties but also for its ability to improve the health and well being of consumers, thus leading to the advent of “FUNCTIONAL FOODS”.  Probiotic organisms of the gut and prebiotics are two under explored functional foods. Hence the current study was done with the aim of formulating a synbiotic health drink to enhance the intestinal flora. Dietary prebiotic sources like whole wheat, oats, soyabean, samai and artichoke were used in the preparation of the health drink. Whole wheat, samai and soyabean was malted separately, shade dried and powdered. Standard procedure was followed while preparing artichoke powder. All the selected ingredients were blended together along with one gram of lyophilized vacuum dried lactic acid bacillus. Six variations of the drink was prepared and organoleptically evaluated to find the most accepted variation. On sensory evaluation, Variation II was graded to be very good in all aspects like appearance, taste, texture, colour and flavour. Ten grams of the best accepted variation II contained 4.7g of malted soyabean, 2.3g of oats powder, 1.2g each of malted wheat and malted samai and 0.5g of artichoke. The above variation also provided more energy (37.84 Kcal), protein (2.58g), fibre (1.23g) and less fat (0.07g). The nutrient content was analysed in the laboratory for energy, protein, fat, fibre and inulin (3.65g) content. The drink when supplemented was also found to reduce the faecal pathogenic load. Hence it can be concluded that the formulated synbiotic drink was low cost, nutritionally rich and also enhanced the intestinal flora. This drink can sure be considered as a potential nutritional supplement and a ideal alternative to drugs.

INTRODUCTION: Global urbanization has lead to a nutrition transition leading to a clear shift from a diet rich in fibre, minerals and vitamins to one rich in carbohydrates and fats that has lead to an increase in lifestyle disorders and thereby increased dependency on wonder drugs. The global pharmaceutical industry is changing rapidly and the industry is being forced to look for new models of efficiency. India's pharmaceutical industry is now the third largest in the world in terms of volume. Its rank is 14th in terms of value. Between September 2008 and September 2009, the total turnover of India's pharmaceuticals industry was US$ 21.04 billion. The domestic market was worth US$ 12.26 billion as reported by the Department of Pharmaceuticals, Ministry of Chemicals and Fertilizers. As per a report by IMS Health India, the Indian pharmaceutical market reached US$ 10.04 billion in size in July 2010. A highly organized sector, the Indian Pharma Industry is estimated to be worth $ 4.5 billion, growing at about 8 to 9 percent annually. The pharmaceutical industry in India meets around 70% of the country's demand for bulk drugs, drug intermediates, pharmaceutical formulations, chemicals, tablets, capsules, orals and injectable. With increased drug discovery and marketing, there is a compelling trend towards large drug dosage 1.

To combat these trends, the World Health Organization advocated the implementation of alternative disease control strategies such as exploiting the therapeutic and prophylactic potential of probiotic bacteria and prebiotics. Food is no longer judged only in terms of taste and immediate nutritional needs, but in terms of their ability to improve the health and well being of consumers, thus leading to the advent of “FUNCTIONAL FOODS”.

The term functional foods comprise some bacterial strains and products of plant and animal origin containing physiologically active compounds, beneficial for human health and reducing the risk of chronic diseases 2. Among the best known functional compounds are probiotics and prebiotics.

Probiotics are traditionally defined as viable micro organisms that have a beneficial effect in the prevention and treatment of specific pathologic conditions when they are ingested in the stomach. Currently lactic acid bacteria, particularly Lactobacillus and Bifidobacterium species are well known probiotics. Probiotics enhance human health by stimulating immunity, competing for limited nutrients, inhibiting epithelial and mucosal adherence and inhibiting the production of antimicrobial substances 3.

Some probiotic strains have proven beneficial effects on the intestinal immunity. Sherwood (2003) proved that probiotics increase the number of Immunoglobulin A and other immunoglobulin secreting cells in the intestinal mucosa thereby giving a boost to the immune system. It has been used successively in antibiotic associated diarrhoea, HIV disorder, enteral feeding diarrhoea, Helicobacter pylori infections, lactose intolerance, inflammatory bowel disease and some types of cancer 4.

Probiotic organisms are closely associated with the host’s health as they act as an important biodefence in preventing colonization and proliferation of pathogenic bacteria in the intestine 5. Prebiotics are non-digestible food ingredients that beneficially affect the host by selectively stimulating the growth and activity of one or a limited number of bacteria in the colon 6. Prebiotics enhances the fermentation and colonization of friendly bacteria like lactic acid bacteria and Bifidobacterium bifidus. It comes in various forms like inulin, fructooligosaccharide, galactooligo- saccharides of which inulin is the most common.

Saccharides which resist hydrolysis by digestive enzymes are not absorbed in the upper gastrointestinal tract. They pass into the large intestine where they modify the colonic micro biota so as to increase the load of potentially health promoting benefits 7. Foods containing oligosaccharides and polysaccharides are claimed to have prebiotic activity.

Among the identified prebiotic components, inulin is found as a natural component in several edible fruits and vegetables. The average daily consumption has been estimated to be one to four grams. Inulin is a group of fructose polymers (fructans) linked by ß (2-1) bonds that limit their digestion by the upper intestinal enzymes. Inulin is found in plant species like whole wheat, raw oats, soyabean, onion, banana, chicory, artichoke and unrefined barley 8.

Inulin type fructan primarily enhance calcium absorption and had an effect on colonic absorption in humans 9. Probiotics, mainly active in the small intestine and prebiotics effective in the large intestine is said to produce a synergistic effect when administered in combination 10. The term synbiotic is used when a product contains both probiotics and prebiotic functional foods in it.

The non digestible fibres (prebiotics) are known to aid in faster fermentation and colonization of the friendly probiotic bacteria, thus bringing about a doubly synergistic effect to the human host. The gut microflora is known to breakdown vitamins and also ferments fibre and carbohydrates to short chain fatty acids, which are important for supporting a healthy intestinal barrier and inhibit the growth of harmful bacteria. A healthy intestinal flora is also associated with intestinal (stool) regularity 11. The adult intestinal tract contains about four pounds of bacteria. Normally there should be a balance of about 85 percent probiotic bacteria and 15 percent harmful bacteria. But for many people it is vice versa 12.

Therefore, interactions between a person and micro organisms in ones body can be crucial to an individual’s health and wellbeing. Hence colonic microbiota can be modulated with a feasible working concept for the development of functional food component.

In order to modulate the colonic microbiota, the study was conducted with the aim of formulating a low cost synbiotic health drink using dietary sources of prebiotics like malted soyabean, malted wheat, oats, malted samai and artichoke, which are an excellent source of fibre, palatable and easily digestible and lactic acid bacillus. A health drink is commonly consumed and preferred by all ages. It is easy to swallow and the burden of mastication is eliminated. 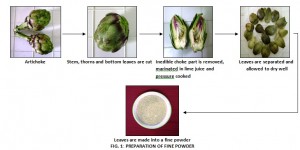 Formulation of Prebiotic Health Drink: Soya bean, whole wheat and samai were washed in running water and soaked in three times its volume of water for 24 hours. They were then kept in wet muslin cloth for sprouting to about 1centimeter. The sprouting time for soya bean, whole wheat and samai were 72 hours, 30 hours and 24 hours respectively. They were then shade dried in order to avoid nutrient loss and powdered. Oats and artichoke were also powdered separately.

Malting process was done in order to improve its digestible properties, make it more palatable and easy to consume. The process of sprouting also enhances the nutritive value of the ingredients, improves its bioavailability and destroys the anti nutritional factors present in food. Therefore soyabean, whole wheat and samai were sprouted and malted.

Development of Different Variations: To test the acceptability of the health drink, six variations were prepared. The ingredients were mixed in various proportions to develop six variations. However, the quantity of artichoke was kept constant at 0.5 g for all the developed variations. 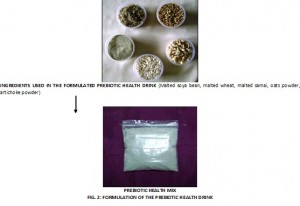 Organoleptic Evaluation: Organoleptic evaluation was carried out by a panel of 30 members to test the acceptability in terms of color, flavor, texture, taste and appearance. The panel included 12 males and 18 females in the age group of 40 - 65 years. A hedonic rating scale relates to pleasurable or unpleasurable experiences. Each attribute was rated on a scale of excellent, very good, good, fair and poor and key scores 5, 4, 3, 2 and 1 were given respectively and the mean scores were calculated. A five point rating scale is usually used to measure the consumer acceptability of the food products 21.

Nutrient analysis of the Formulated Health Drink: The formulated health drink was chemically analysed for nutrients like proteins, fats, carbohydrates, fibre and inulin. Energy was calculated by using the Atwater method. The inulin content was also analysed, as it is a prebiotic component.

The above table represents the mean scores for each attribute for all the six tested variations. In terms of colour, flavour, taste and texture, Variation II scored the maximum and Variation VI had the least score. The comments from the panel members showed that, Variation II tasted very good and had pleasant odour and flavour.

The appearance and texture was also scored excellent by majority of the panel members. Therefore, the second variation was considered the most acceptable. Ten grams of the best accepted variation II contained 4.7g of malted soyabean, 2.3g of oats powder, 1.2g each of malted wheat and malted samai and 0.5g of artichoke powder.

Therefore the second variation was considered the most acceptable and hence formulated for the supplementation study.

The inulin content of health mix is 3.65g. Inulin is a non digestible food ingredient that selectively stimulates growth of a number of potentially health stimulating bacteria and has well documented evidence in the prevention and treatment of intestinal diseases and hence improve the colonic function 23.

Energy contribution for the best accepted variation II by carbohydrates, fats, proteins were calculated by proximate principle as shown in table 4.

Faecal Pathogenic Load: The effect of the formulated synbiotic drink on faecal pathogenic load was tested and showed that two samples had salmonella and shigella in moderate amount in the faeces. However, after one month of supplementation with the synbiotic preparation, these pathogens were completely eliminated from their gastrointestinal tract as shown in the below figure 3.

CONCLUSION: The field of functional foods especially probiotics and prebiotics is very promising. The formulated health drink is nutritious, low cost and can confer a shoal of health benefits to individuals. It also can open up a large market potential in terms of functional food products in the future. 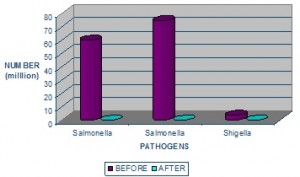